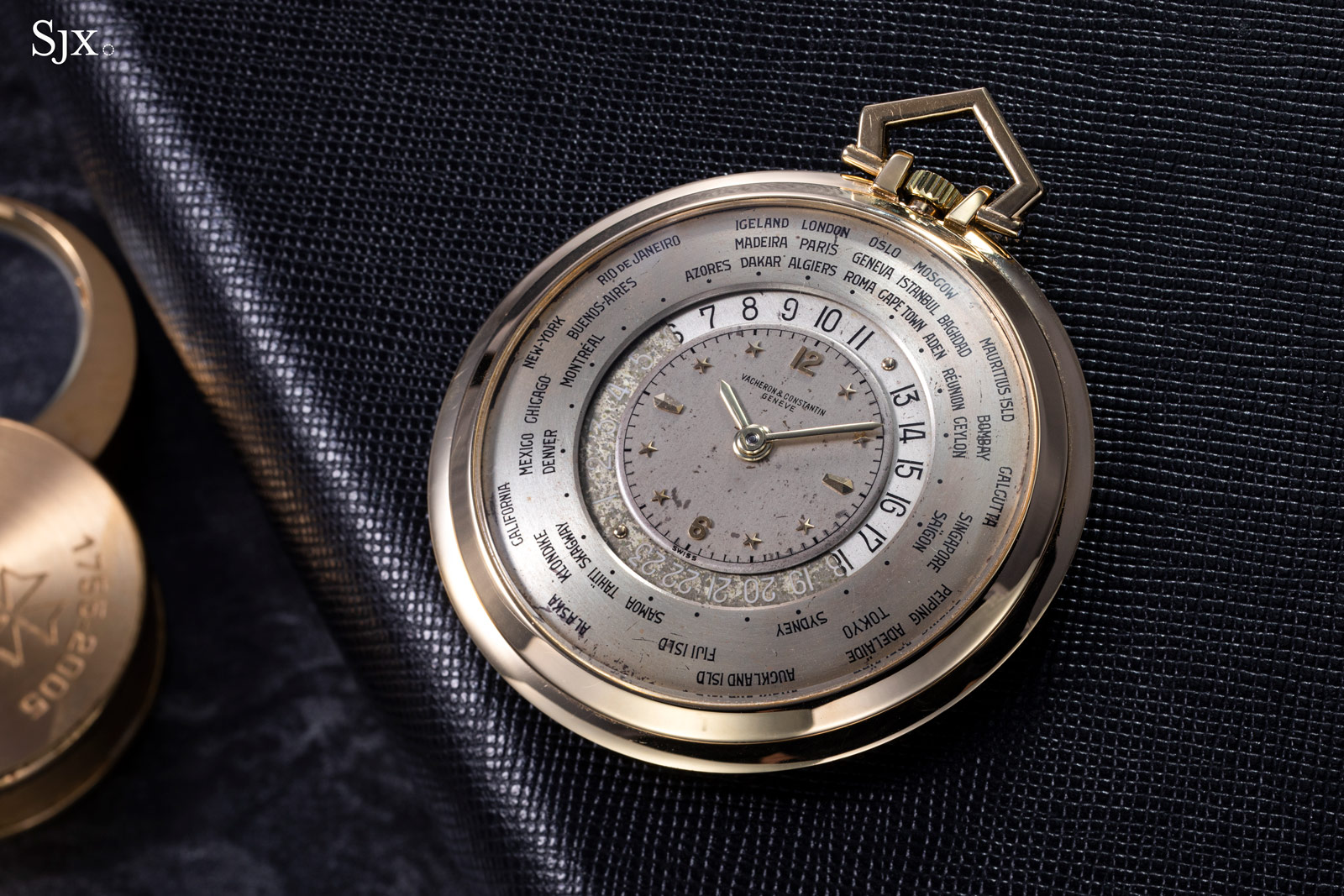 Les Collectionneurs includes Vacheron Constantin timepieces from the last century that span the brand’s repertoire, from the mega-rare complicated references to more affordable time-only watches – all sympathetically restored and backed by a two-year warranty.

A selection of Les Collectionneurs watches are on usually show at a handful of boutiques around the world, and a 16-piece line up recently landed in Singapore. From now till March 31, 2021, the watches will be available at the Vacheron Constantin boutique in Marina Bay Sands, alongside Diptyques, an exhibition exploring the brand’s historical watches created in collaborations with other artists, jewellers, and designers (which are drawn from the brand’s museum and not for sale).

Here’s a look at highlights from the Les Collectionneurs line up in Singapore.

Completed in 1949, this yellow gold pocket watch is equipped with the world time mechanism invented by Louis Cottier. Unlike a GMT watch that tells the time in a second location, a world time use a simple but clever pair trick to show the time in all 24 time zones at once: a 24-hour disc indicating the time on a 24-hour scale alongside a cities ring for each time zone. 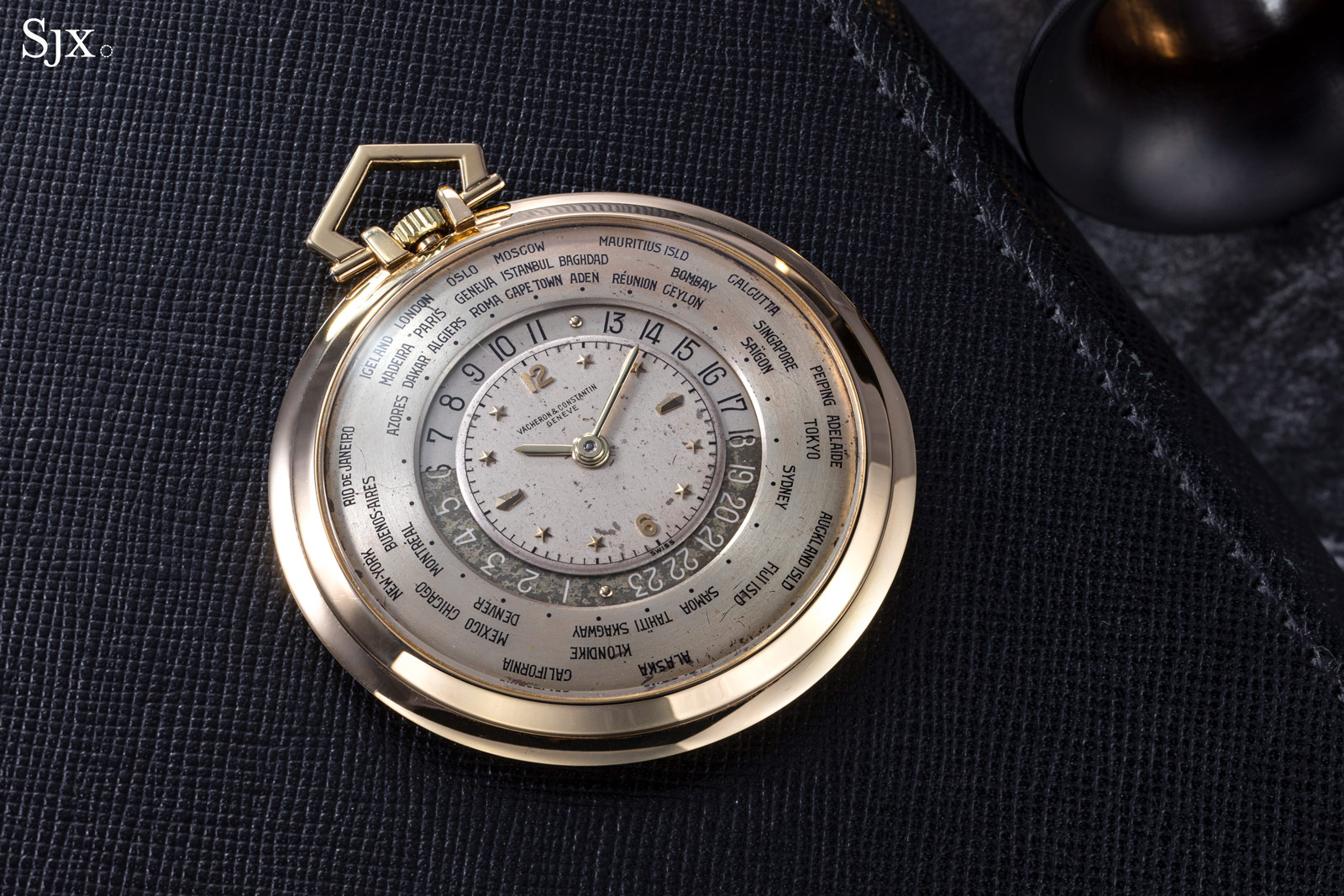 The present example has been restored, but only modestly, showing noticeable age, particularly on the dial, which makes it appealing original. 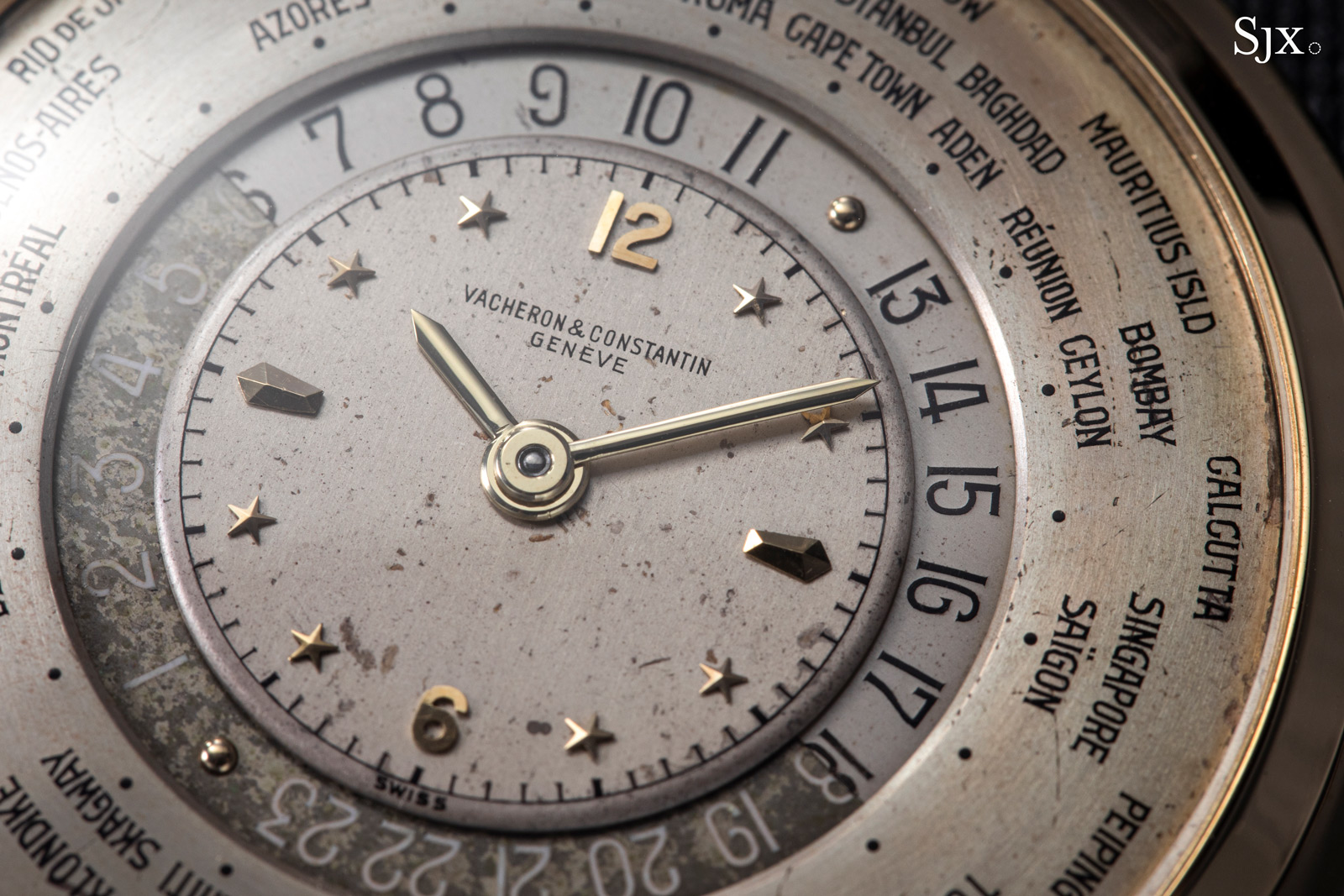 The dial striking star markers for the hours

Less exotic than the world time pocket watch – and more affordable – this Chronomètre Royal ref. 6111 is still captivating for its simplicity and appealing quirky design. At a distance, this 1956 example is deceivingly simple – seemingly a time-only watch an ordinary dial – but design of both the dial and case incorporates subtle details that give it finesse. 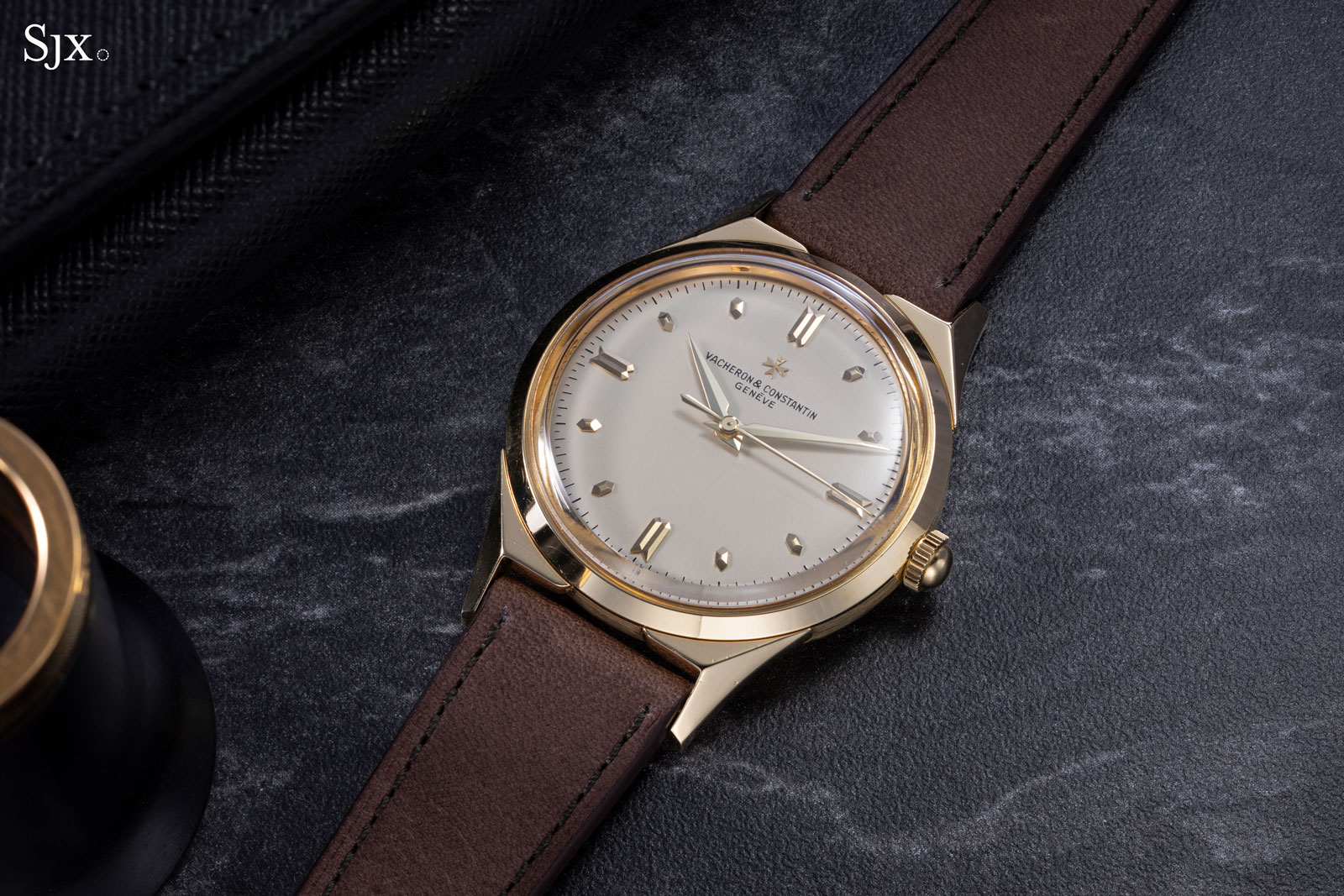 To start, the watch is beautifully proportioned, an overused but apt in this case. The dial stands out for its indices that are surprisingly unusual in shape, with short lozenge-shaped marks for the hours and a double, elongated-lozenge for each quarter. 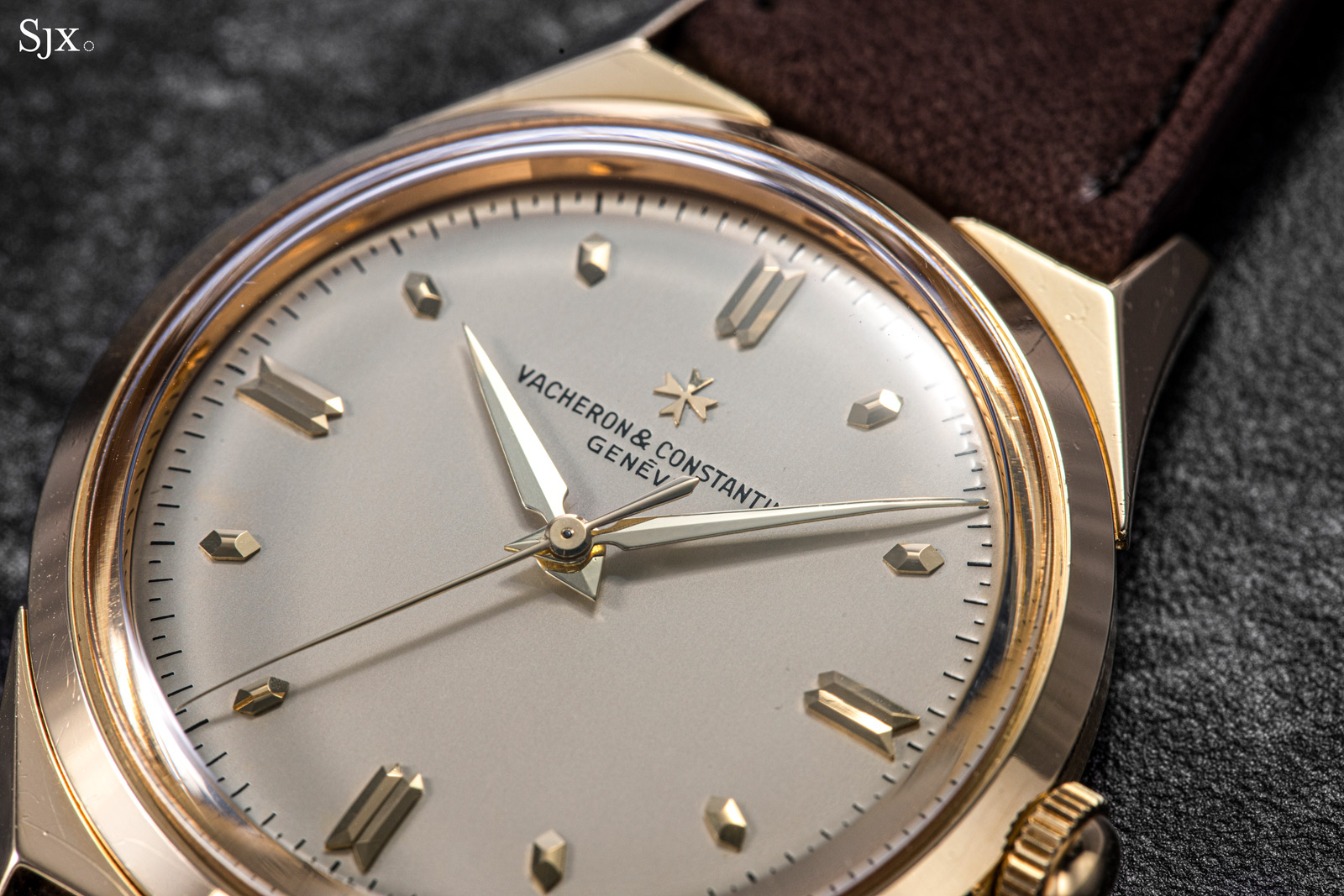 But the defining element of the ref. 6111 is the clever use of geometry on the case, where the four lugs are each one arm of the Maltese cross, the brand’s logo. The modern-day FiftySix collection draws inspiration from the ref. 6111 for its similar lugs, which are gentler in shape.

Like many of the wristwatches in Les Collectionneurs, this ref. 6111 has been artfully restored, giving it the aura of a new watch while still preserving many of the details that make it appealing as a vintage timepiece. Most notably, the Vacheron Constantin logo under 12 o’clock and minute track are slightly raised, indicating the champleve enamel used to create the markings remains intact. In contrast, excessive restoration can sometimes flatten the markings entirely. 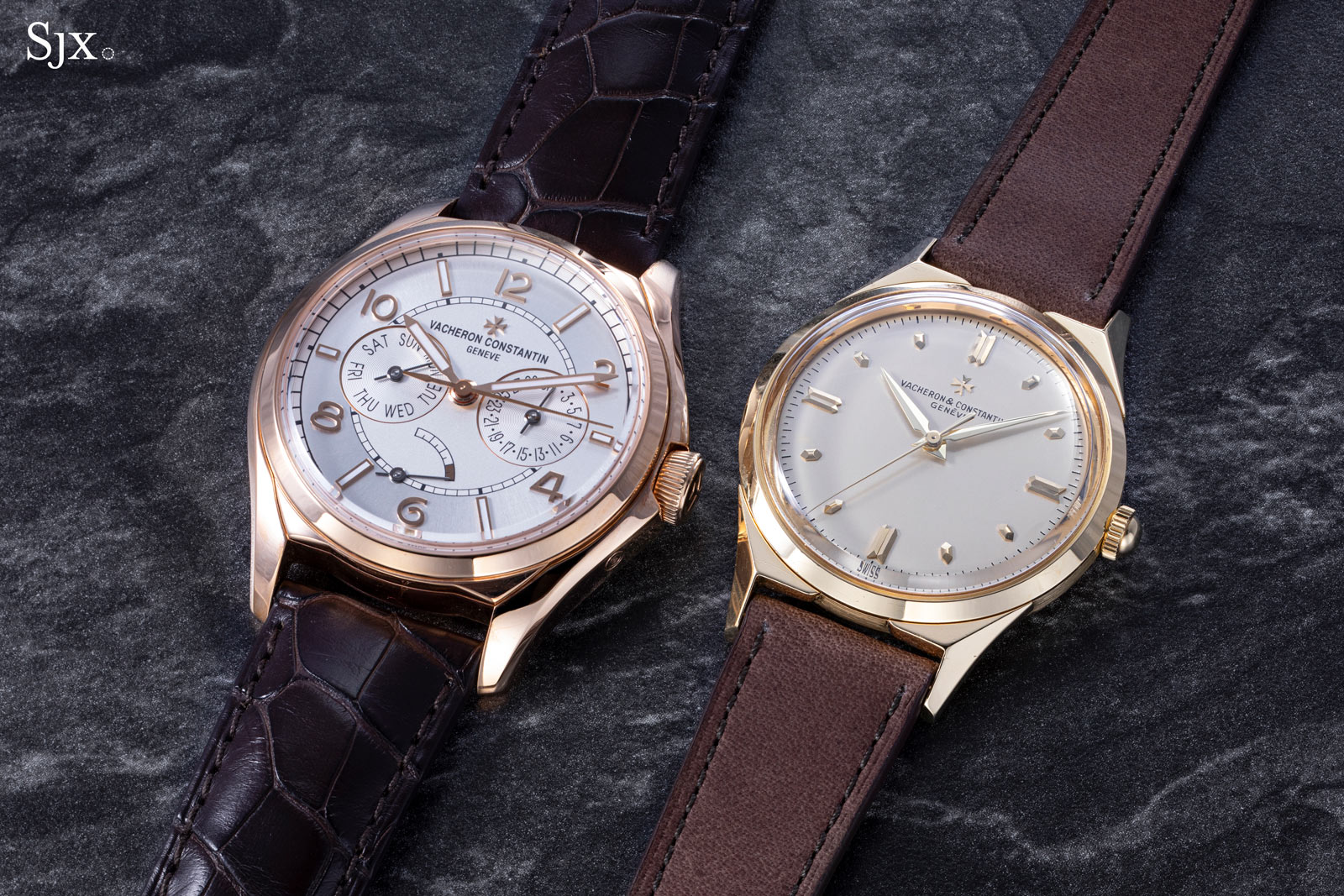 Last but not least is a three-hand watch that has even more flair, perhaps the most flair of all the time-only watches in Les Collectionneurs – the ref. 6440. Nicknamed “Cioccolatone” – Italian for “chocolate” – the watch gets its name from the wide, squarish case that calls to mind a piece of slightly melted chocolate.

The watch is striking in its shape and size, calling to mind a flamboyant era of watchmaking that is seemingly far removed from today. But this is a notably late example of the watch, having been produced in 1967, just two years before the first-ever quartz watch that would eventually usher in the Quartz Crisis. And the design is distinctive enough that Vacheron Constantin has since revived it in the modern day, most notably as the Toledo 1952. 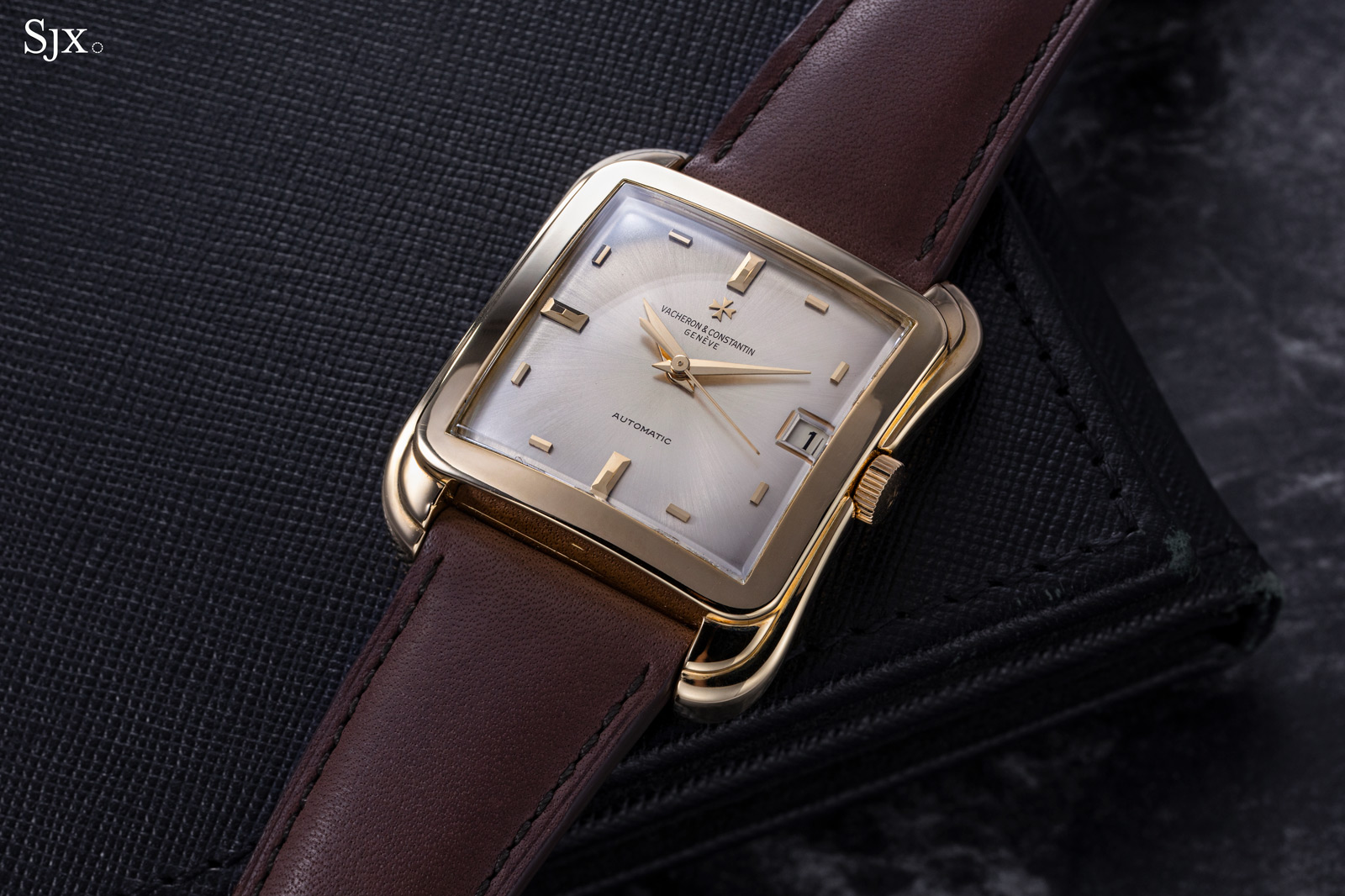 Turn the watch on the side and the case is revealed in all its glory – the silhouette seemingly flows outwards, but is also stepped, giving it the appearance of a viscous wave. 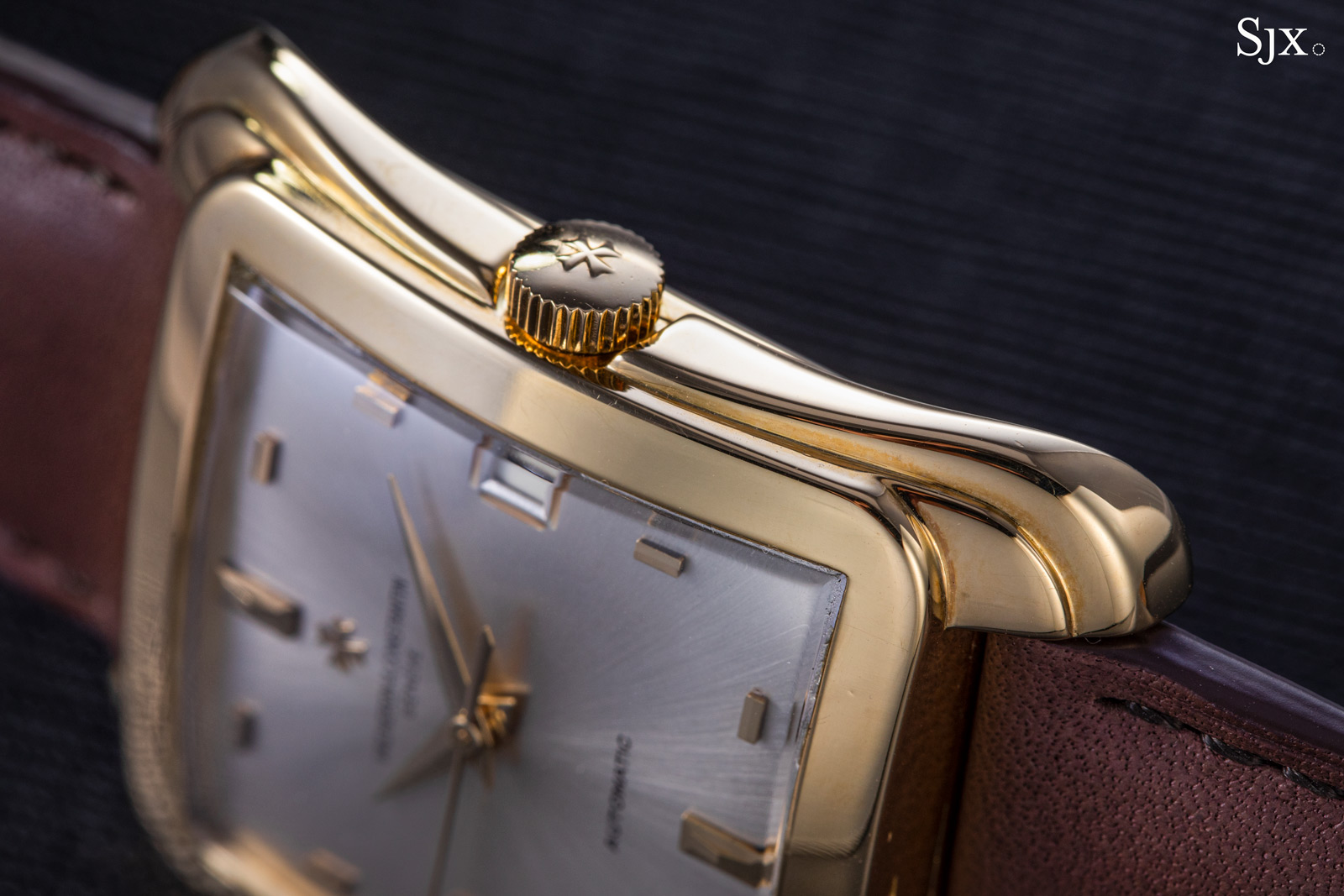 Similarly, the dial is simple, but extravagant in its details. The indices for the quarters, for example, are oversized and composed of several different shapes. And the markers for the hours in between are arranged in an unusual pattern that traces out a square, but creating a harmonious but quirky look. 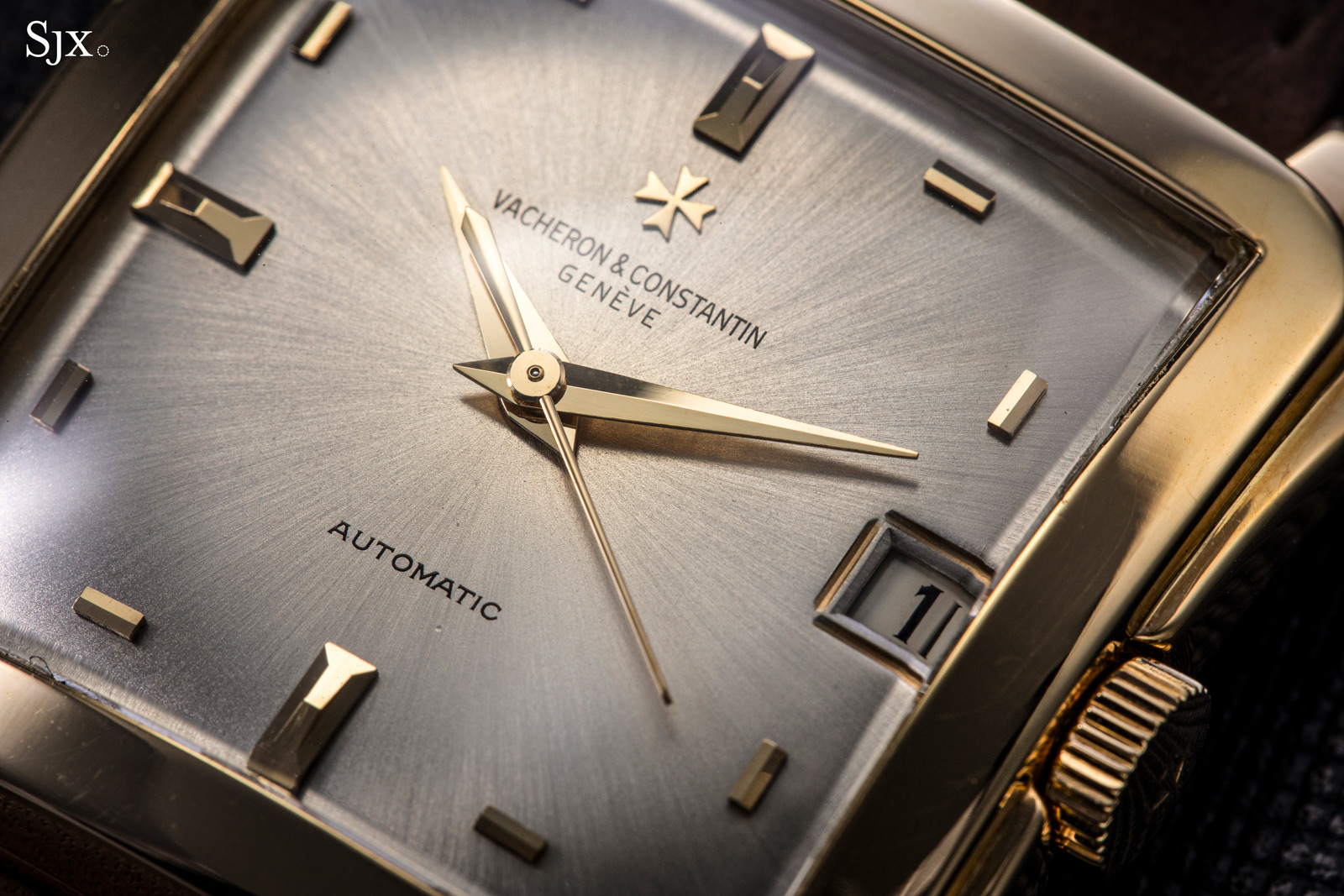 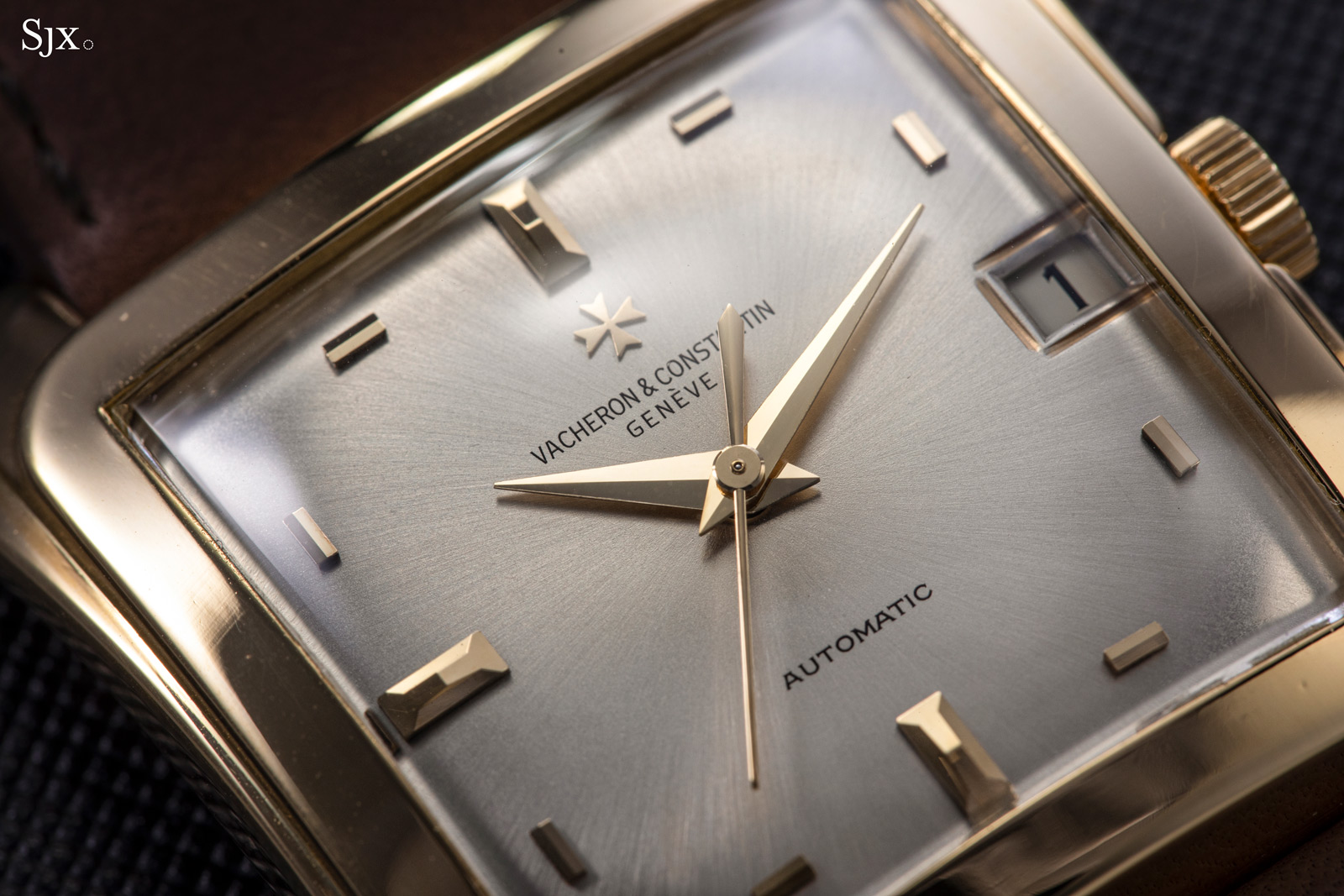 Even the central boss of the second hand is crisp, implying excellent restoration or a replace of the original hands with a period-correct set

An expressive, but still elegant and traditional design, the Cioccolatone is a paradoxical watch that exemplifies explains the unusual appeal of some vintage timepieces.

The Les Collectionneurs selection, which includes the highlights above, are on show at the Vacheron Constantin boutique in Singapore from now until March 31, 2021, together with the historical watches in Diptyques.

This was brought to you in partnership with Vacheron Constantin.

Eighteen have come to town - and are for sale.