Starting this weekend, the theatre inside Singapore’s Marina Bay Sands resort will become home to the epic, 16-day Patek Philippe Watch Art Grand Exhibition, the biggest and longest such event ever staged by the brand. Open from 28 September to 13 October, the enormous showcase of horological artefacts and prowess will take visitors through the company’s history while delving into its many innovations and milestones.

Divided into 10 themed rooms, the exhibition will present a comprehensive array of timepieces spanning centuries, including the first ever perpetual calendar wristwatch, as well as legendary grand complications like the record-setting Calibre 89.

Some 400 timepiece will be on display – all detailed in a hardbound catalogue that will be sold to benefit charity – and here are seven highlights of the show that are worth a second look. It was a one-off creation powered by a movement dating to 1898. Initially developed for a women’s pendant watch, the compact calibre only found a home 27 years later inside the landmark wristwatch.

Crucially, it was also an instantaneous perpetual calendar, with calendar indications that jump instantaneously at the stroke of midnight, rather than creeping forward slowly, as in conventional calendar watches. Measuring just 34.4mm in diameter, the watch was sold in October 1927 to American collector Thomas Emery, and today is one of the crucial watches explaining Patek Philippe’s history in its museum.

The monumental Calibre 89, which for over 25 years was the most complicated timepiece in the world, was created to mark Patek Philippe’s 150th anniversary in 1989. Built as a set of four identical watches in different cases – one each in white, rose and yellow gold, as well as platinum – along with one prototype, the Calibre 89 was not only major moment in the history of the brand but also in revival of interest in complicated watches. 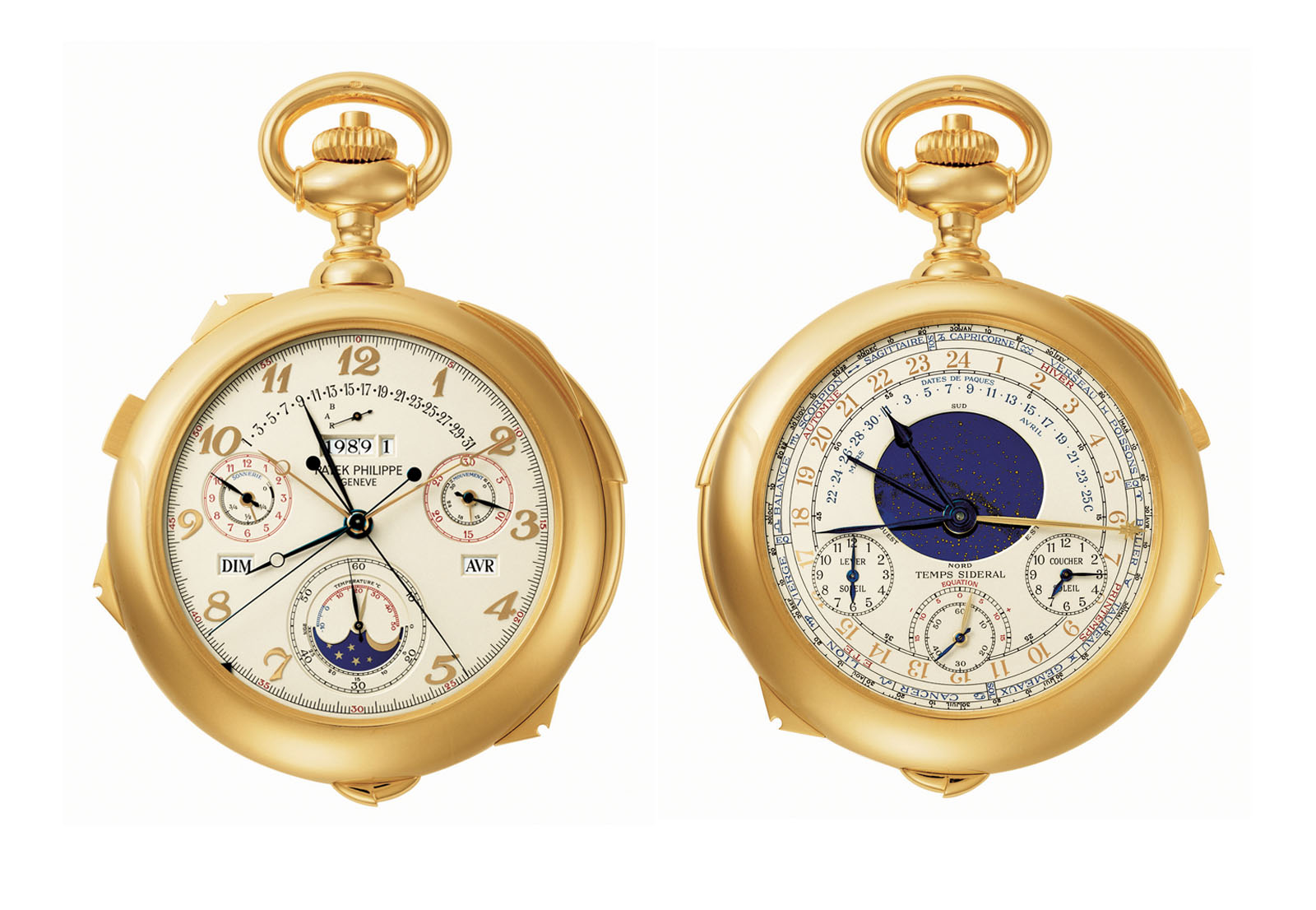 Developed over nearly a decade, the watch had 33 complications – nine more than the Henry Graves Supercomplication – including the equation of time, grande and petite sonnerie, perpetual calendar, and even the date of Easter. As a result, the Calibre 89 is made up of a staggering 1728 components in all, including 24 hands, 184 wheels and 332 screws. 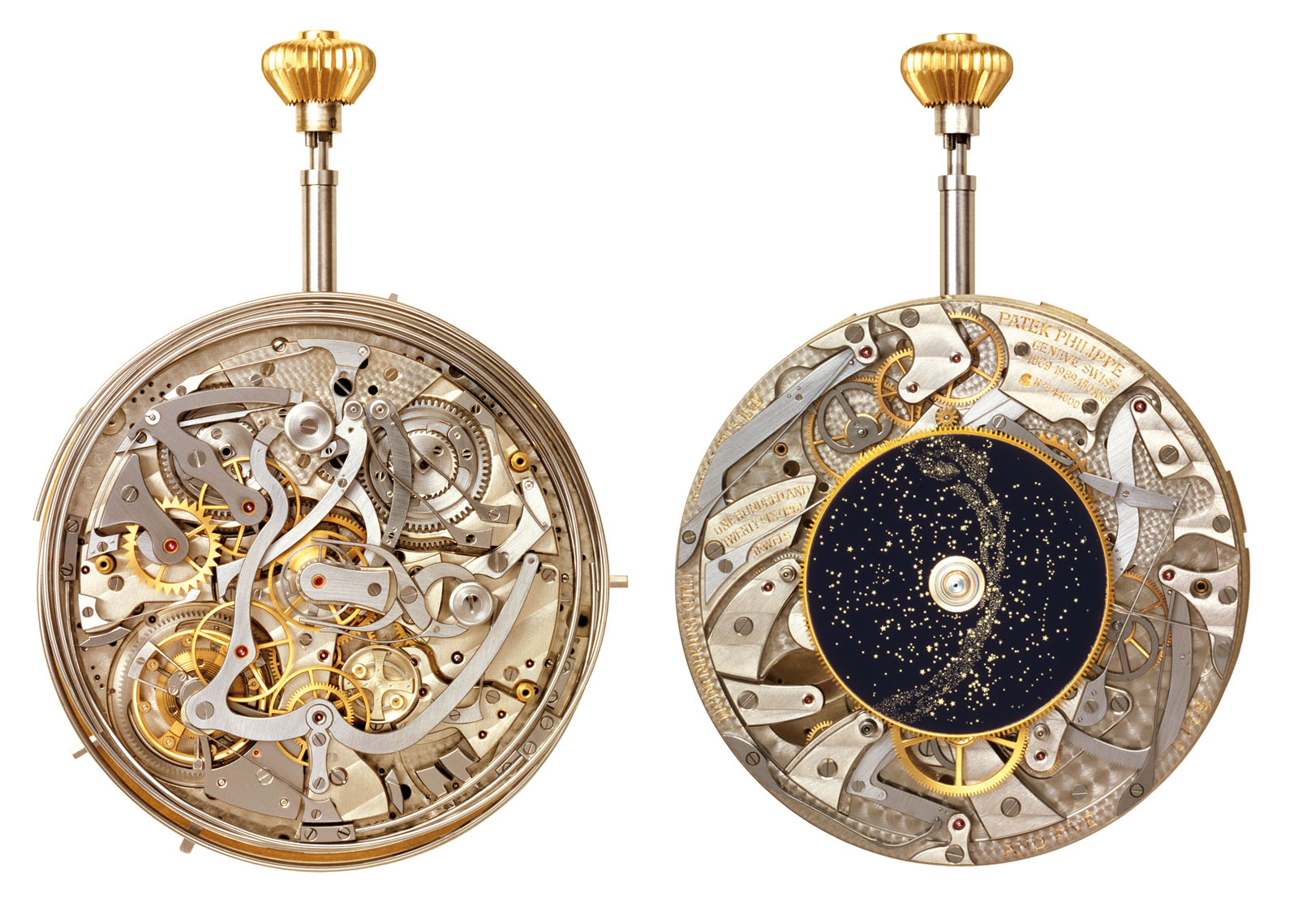 Though first sold as a set of four watches, the Calibre 89s were eventually split up and sold individually, with the most recent example sold being the yellow gold example that was offered by Sotheby’s privately in 2018. But the two examples that did sell at auction in the previous decade – the white- and the yellow-gold versions in 2004 and 2009 respectively – remain amongst the 10 most expensive watches ever sold publicly, both achieving well over US$5m.

The watch on display at the exhibition is the yellow gold prototype from the Patek Philippe Museum.

To mark the new millennium in 2000, Patek Philippe introduced the Star Caliber 2000, a double-sided pocket watch with 1118 parts that included 21 complications and six patented mechanisms. It was significant not only for its sheer number of complications, but also for its fascinating combination of functions and ease of use, as well as the massive yet intricately constructed watch case. The perpetual calendar is entirely synchronised with the equation of time and display of sunrise and sunset. It features a solar dial showing the hours, minutes, seconds, the running equation of time, perpetual calendar, sunrise and sunset, and the power reserve for the movement and chime, while the celestial dial on the back shows the movement of the nocturnal sky, lunar orbit, and moon phases. Most notably, it was the first pocket watch to reproduce the original Westminster Abbey chime for the grand and petite sonnerie, a feature for which a patent was filed. The Star Caliber 2000 is the third most complicated watch Patek Philippe has ever made, right after the Caliber 89 and the Graves Supercomplication, but it is the most recent.

It was produced in five sets of four watches each. Four of the sets each consisted of a yellow-, white-, and rose gold watch, plus one in platinum, while the fifth set was composed of four unique platinum examples. In 2012, a single yellow gold specimen was sold at Christie’s for over US$3.5 million. A prototype of Star Calibre 2000 will be displayed at the exhibition.

The exhibition also includes significant historical timepieces that predate Patek Philippe itself, such as this drum-shaped pendant watch made in Nuremberg in 1548 by clockmaker Caspar Werner. More of a historical artefact than timekeeper, the drum watch is an example of extremely early watchmaking.

Like most drum watches of the time, the case is made of gilt brass, engraved with a 24-hour dial in Roman numerals on the outer band and Arabic numerals in the inner one. Time is indicated with a single hour hand. On the outermost rim on the dial are raised circular markers that allow time to be read by the blind or in the dark. Made of brass and iron, the movement is equipped with a verge escapement and a stackfreed – a primitive form of constant force mechanism found exclusively in German watches during the 16th century.

The King of Siam Watch

In a section dedicated to Singapore and Southeast Asia is a pair of pocket watches made for King Rama V of Siam (1853-1910), also known as Chulalongkorn.

One is this gold, minute repeating pocket watch that features a white enamel dial with Roman numerals paired with ornate, gold hands, while the case is elaborately engraved, with a blue enamel royal monogram of the King on the back. Made by English watchmaker William Ilbery for the Chinese market in the early 19th century, this pair of watches – which were acquired by the museum at a German auction house recently – are fashioned in the shape of a peach, which is a symbol of health and longevity in Chinese culture.

Ilbery, along with James Cox, Bovet, Vacheron Constantin, and Pierre Jaquet Droz were some of the pioneering watchmakers who produced many watches catered to the rapidly growing Far Eastern markets of the time, primarily China but also the Ottoman Empire. The case is painted with enamel in gently fading hues to resemble the fruit. It features two green enamel leaves lined with half pearls. The stem, forming a loop for the pendant, is also studded with half pearls of varying shapes and sizes. The case band is decorated with a border of tiny half pearls. At the front of the watch is a white enamel dial with Roman numerals, while the case back opens to reveal a richly decorated movement with a duplex escapement.

Characterised by a cylindrical body and a spherical top, Patek Philippe’s Dome Clocks are its signature tabletop timepiece. First introduced in the 1950s, the Dome Clock has remained in production since.

They are, however, extremely rare; only a dozen or so are made a year, and each is one-of-a-kind, richly decorated with artisanal techniques depicting varied motifs. This exceptionally striking black and gilt example was inspired by traditional Thai ornaments. The clock body is completely decorated with cloisonné enamel in black and yellow, creating a remarkable contrast. The yellow portions are infused with spangles made of silver leaf to enhance the motif. Yellow-gold wires are first applied to the metal base creating an outline of the intricate motif. Enamel powder is then deposed into the tiny compartments created by these wires before the enamel plate is fired in a kiln at a temperature of 745 °C. This process was repeated ten times to achieve the final result. Almost the entire clock is enamelled, save for the gold chapter ring that features black transfer-printed Thai numerals.

Complimentary tickets to the Watch Art Grand Exhibition are available direct from Patek.com.