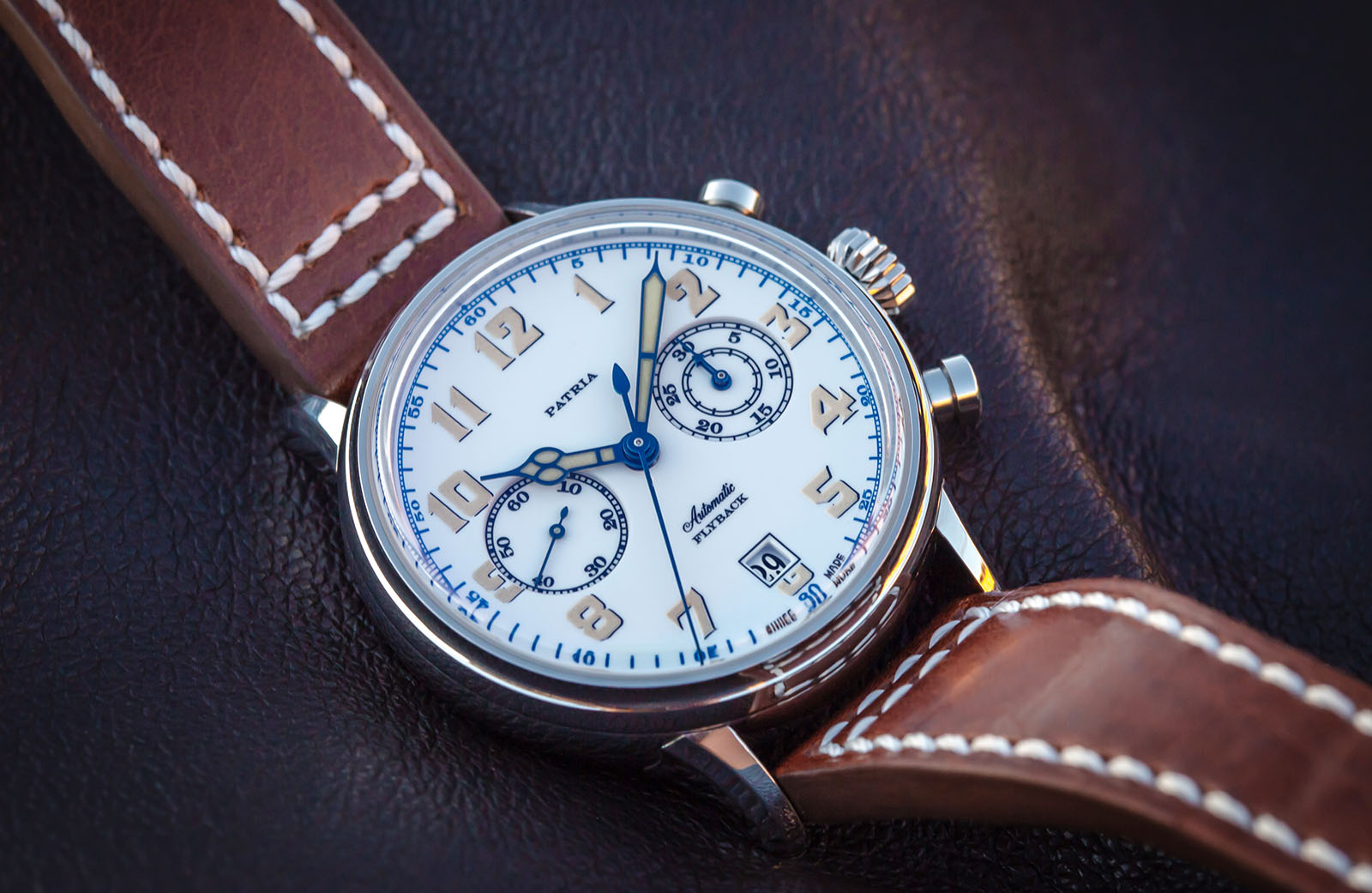 While most startups tend to produce design-led watches that are mechanically conventional, Patria Watch Co. kicks off with a retro timepiece – with a common design admittedly – but one that’s equipped with the impressive flyback chronograph movement by Eterna.

Patria Watch Co. was one of many brands that was founded in the late 19thcentury by Louis Brandt & Frère, a watch company based in Bienne that was the predecessor of Omega.

Prior to the adoption of the Omega brand name, which was actually the name of its bestselling movement, the company produced many of its early watches under a host of labels including Jura, Helvetia, Labrador and Patria. 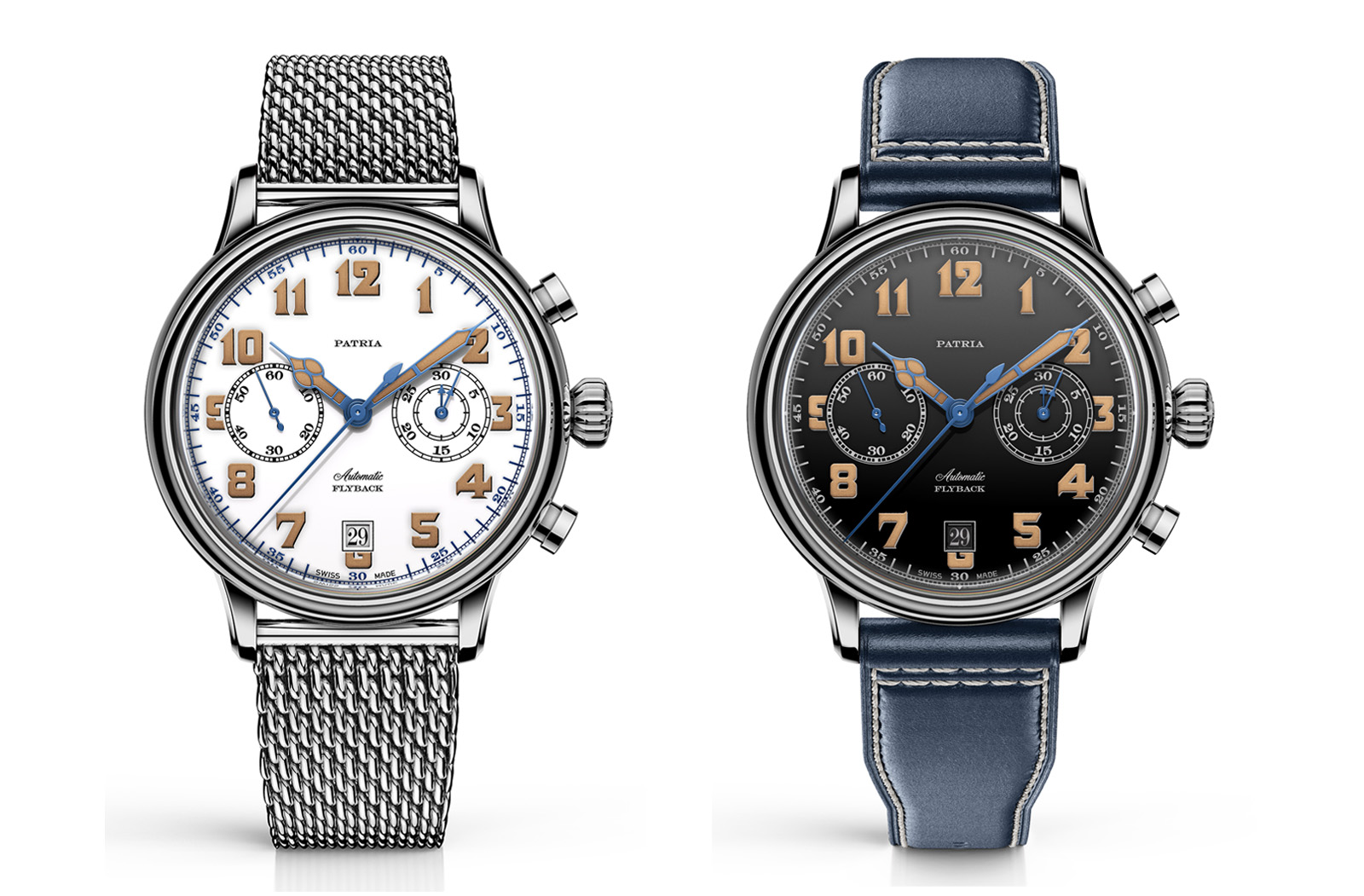 The brand name has now been revived, with the first watch a chronograph inspired by the trench watches produced by Patria Watch Co. for troops during the First World War.

The aesthetics of the watch, however, weren’t unique to Patria. Trench watches looked much the same, being produced to similar specs for an identical purpose. 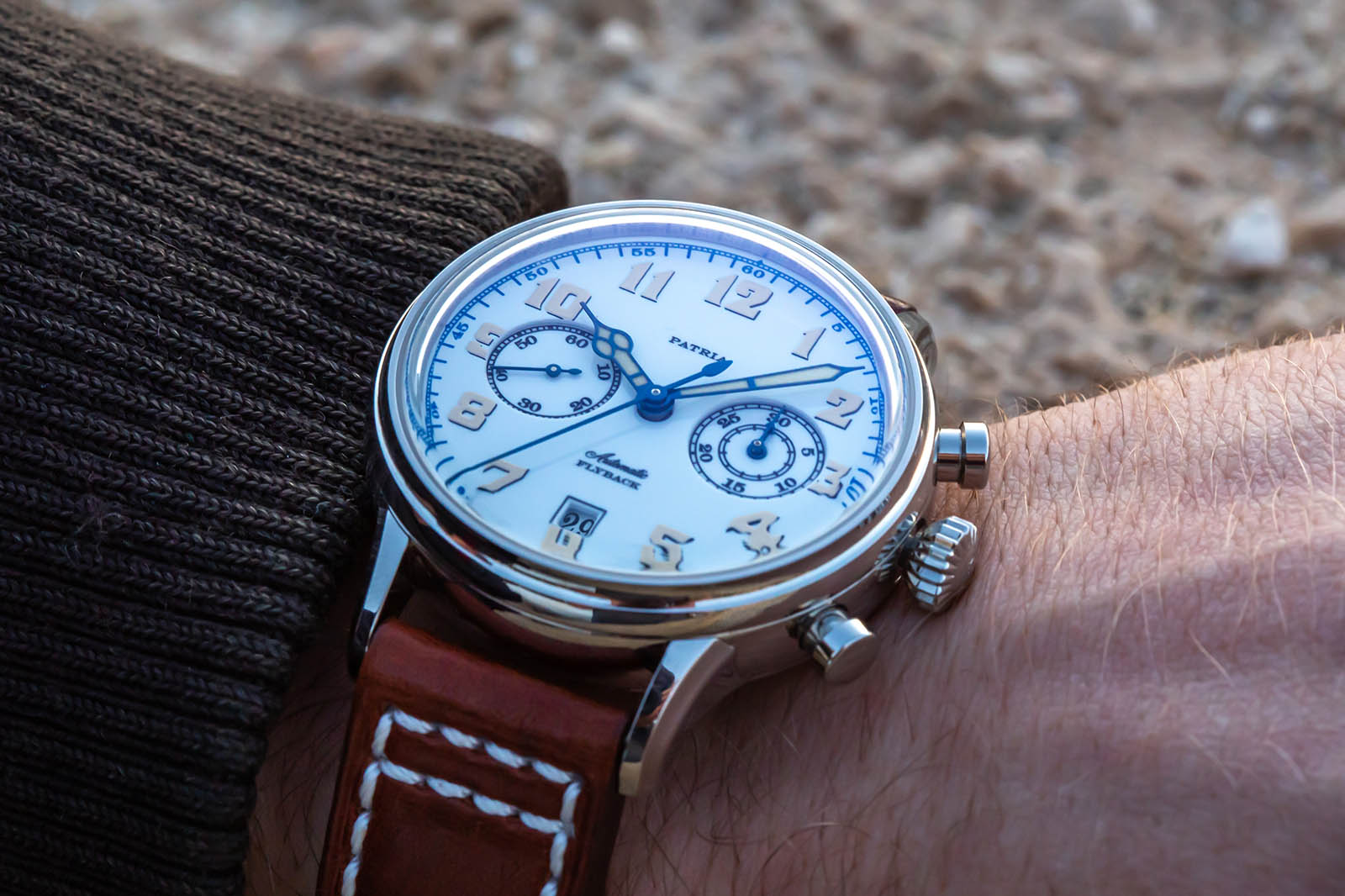 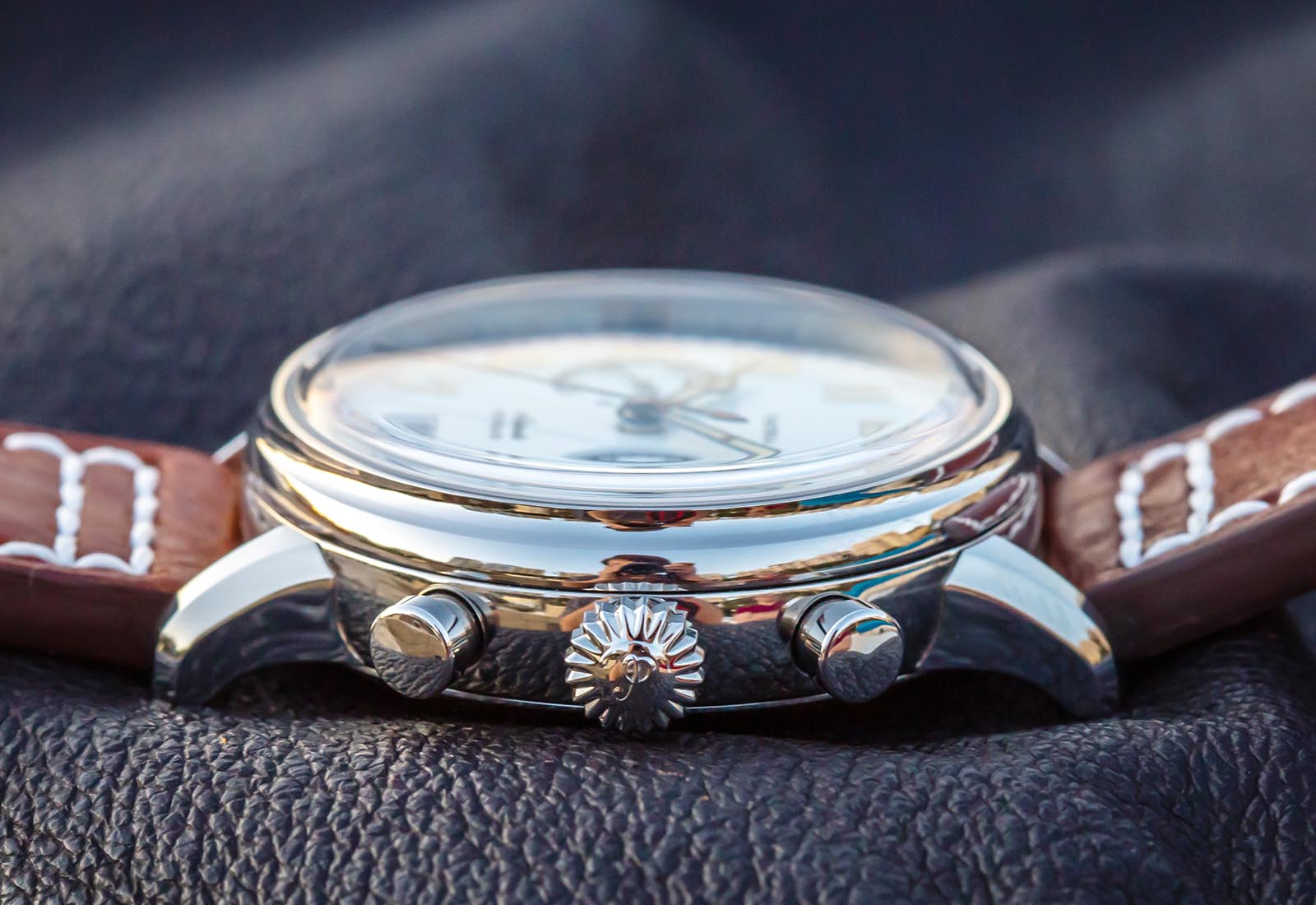 Available with either a white or black lacquered dial, the Brigadier Chronograph has a stainless steel case and measures a large 42mm in diameter — a far cry from the tiny trench watches of World War I.

It features large, Gothic Arabic numerals paired with blued cathedral-style hands. While the numerals and hands were coated with radium on actual trench watches, the Brigadier features faux-aged Super-Luminova that emits a green glow in the dark. 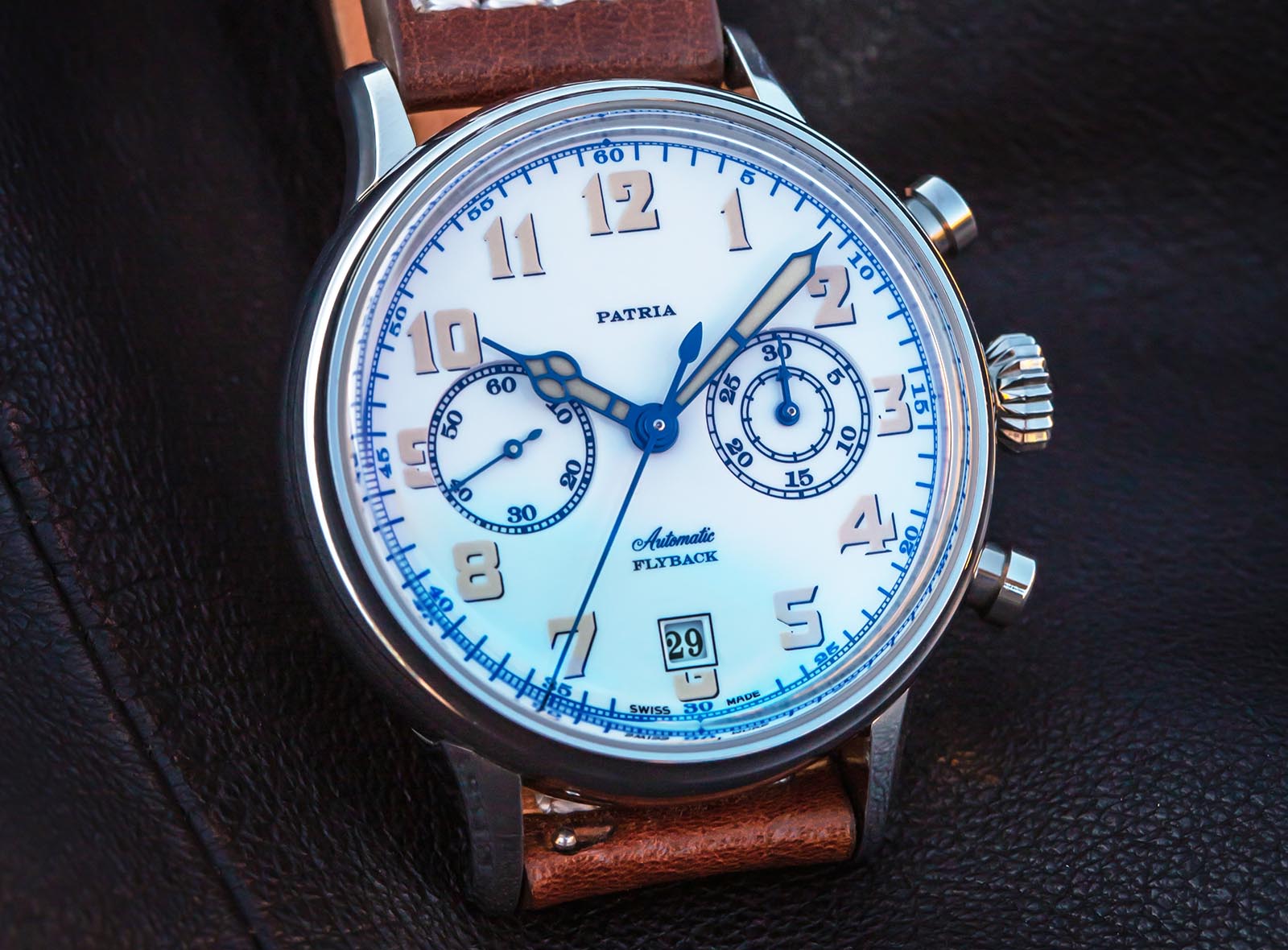 The watch has a “bi-compax” layout thanks to the Eterna movement inside. While chronographs within this price bracket are typically equipped with the common Valjoux 7750 or ETA 2894-2, the Brigadier chronograph houses the smartly constructed, self-winding Eterna cal. 3916A.

Currently owned by Hong Kong-based Citychamp Watch and Jewellery Group, which also owns Corum, Eterna introduced the movement five years ago in its own KonTiki Chronograph. It is based on the brand’s calibre 39 – a robust, solidly built movement that is relatively unknown; despite its merits, the movement is rarely found outside of Eterna. 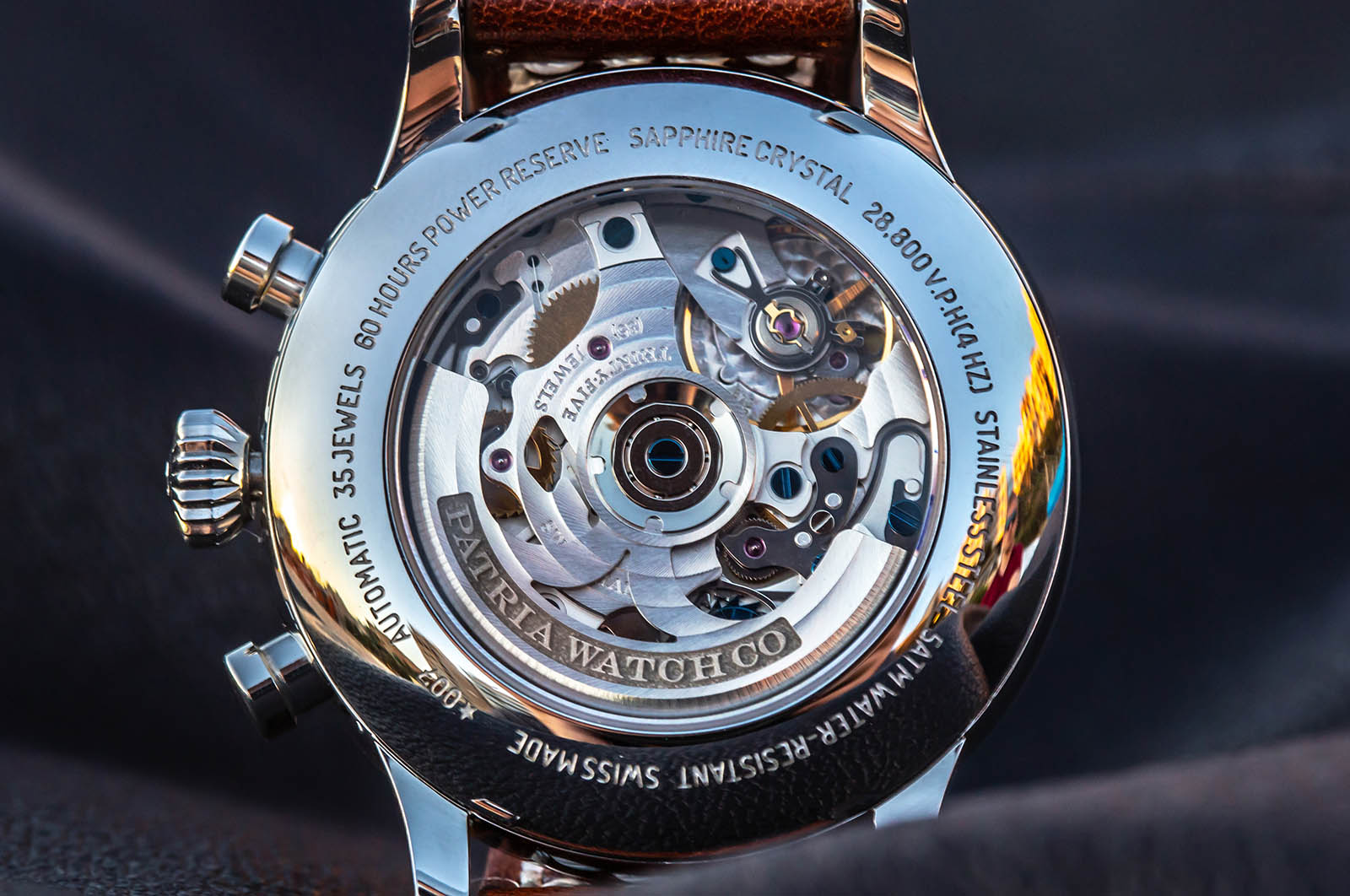 The cal. 3916A, renamed here as the PA-16, bears several characteristics that puts it heads and shoulders above the fray at this price point.

Firstly, it is controlled by a column-wheel mechanism, a system usually found in higher-end movements that facilitates a smoother operation, unlike cam-lever chronographs that have a stiffer pusher.

Secondly, it has a flyback function, which means the chronograph can be instantly reset and restarted with a single push of the lower button.

Next, the counter at three o’clock features a co-axial hour and minute totaliser, which allows the dial to have a clean, bi-compax layout. And lastly, it offers a 60-hour power reserve on a single barrel. 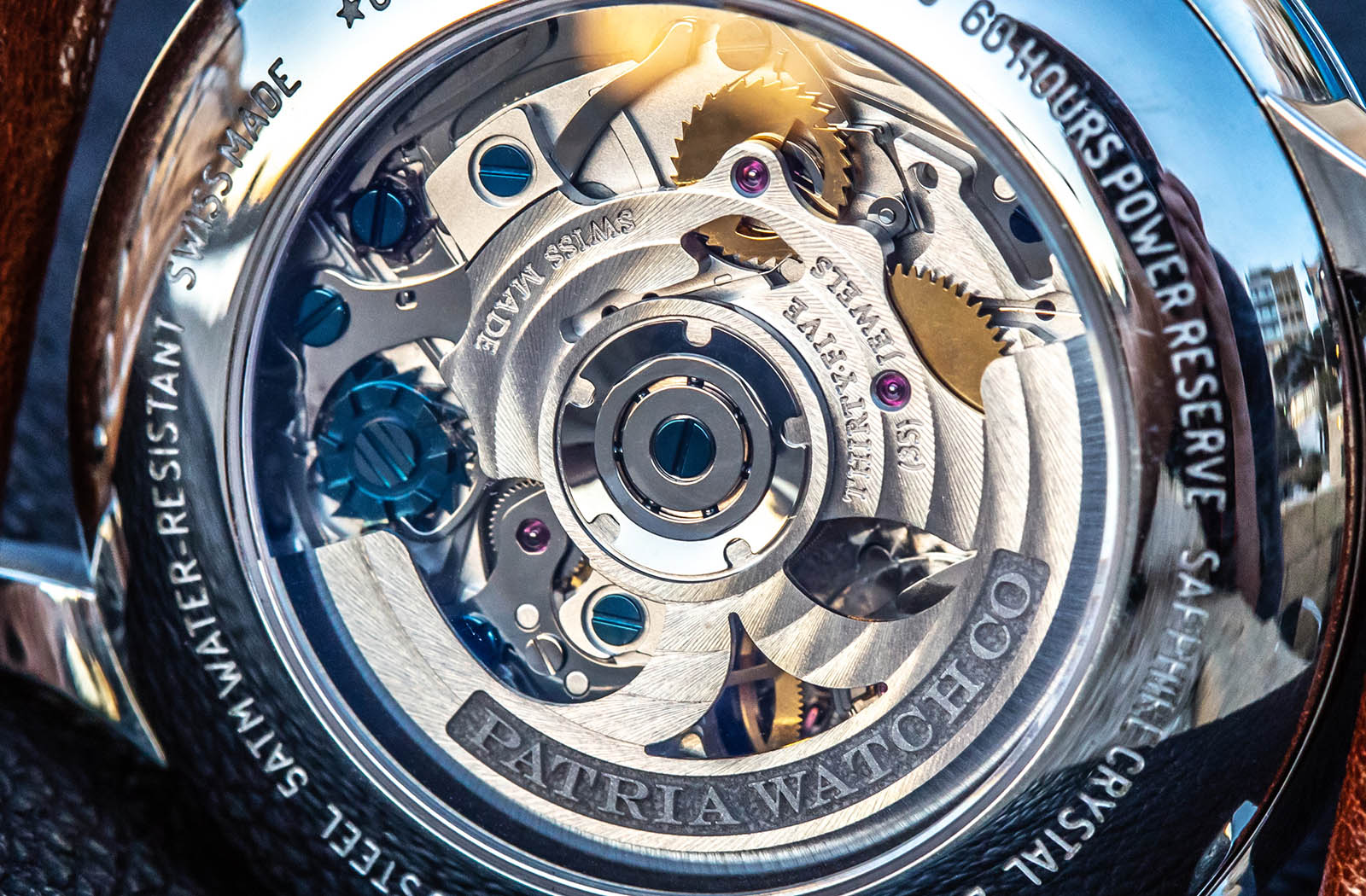 Visible through the sapphire case back, the movement is well decorated for its price. It features perlage on the base plate while the bridges are finished with radial Geneva stripes and treated with rhodium. The screws and column wheel have also been blued, and the rotor features the company’s name in relief.

Prices are inclusive of worldwide express delivery. It is available for pre-order on patriawatch.co.