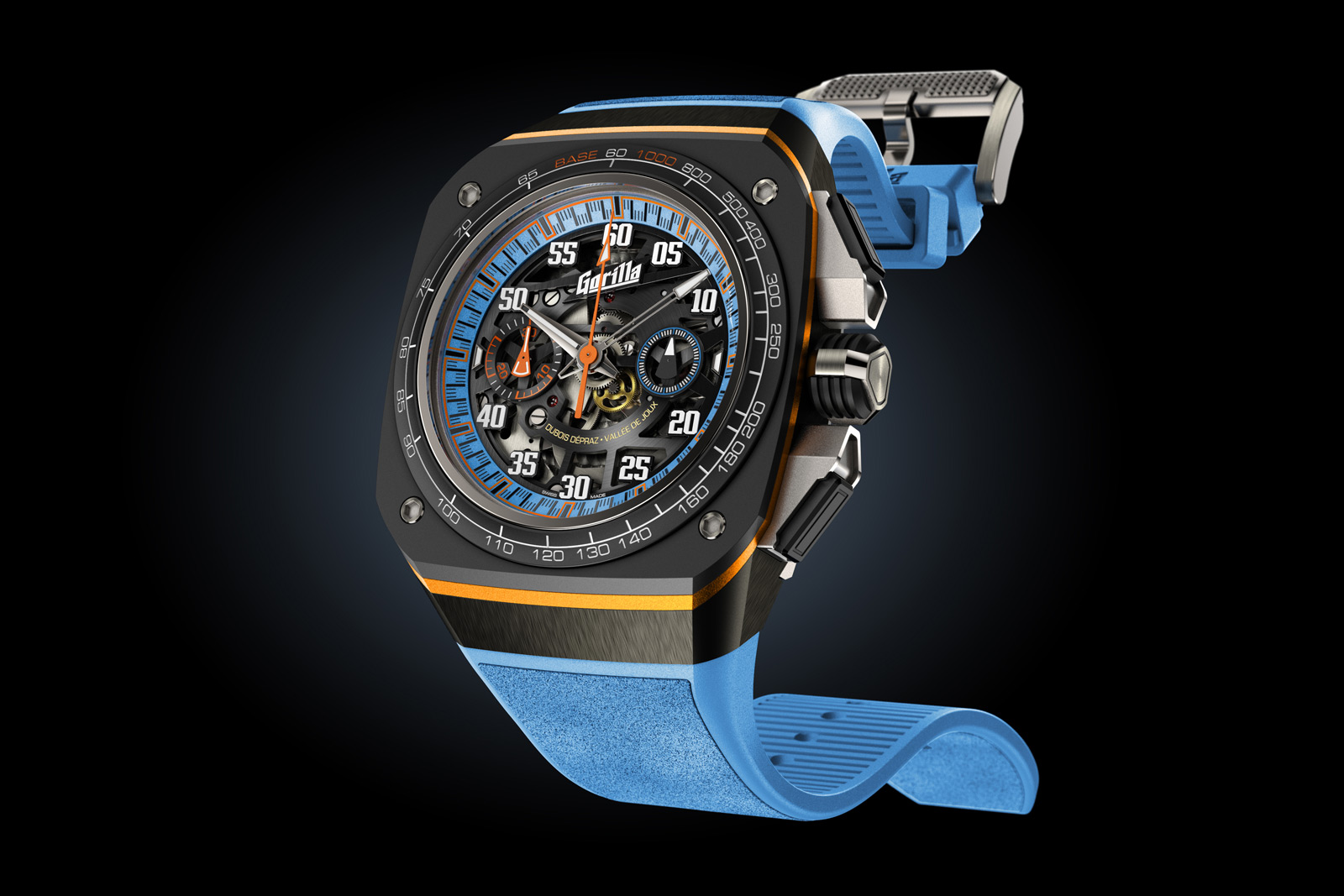 Founded just five years ago, Gorilla has already established a distinct house style, born of the its two founders’ eye for design. Notably, one of the founders, Octavio Garcia, was design chief at Audemars Piguet for over a decade.

The latest from the brand is reassuringly familiar, channeling the style of its inaugural model, but a major step up in terms of form, function, and price – the Fastback Thunderbolt Chronograph. Equipped with a smartly skeletonised dial, it’s the brand’s first chronograph but retains with Gorilla’s recognisable case style. 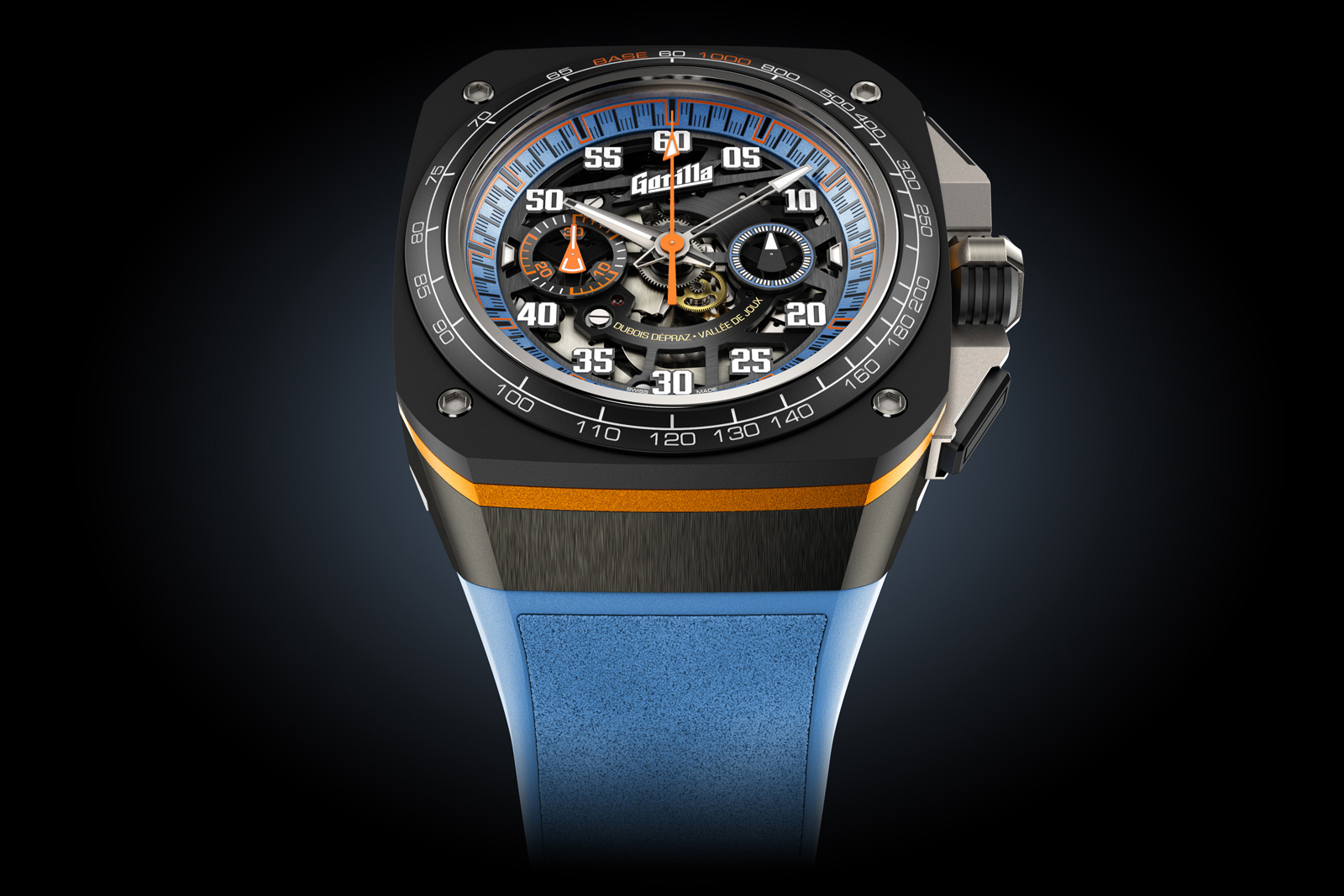 The case is multi-material: a ceramic bezel, followed by an anodised aluminium ring, and then a black-coated titanium case middle and back

Gorilla’s past offerings have been appealing for several reasons. Though evocative of some other well-known designs, its watches are original and handsome – a rare sight at the US$800 price range – and they are usually executed in unusual combinations of materials like titanium and ceramic. At the same time, the brand managed to make uncommon complication relatively affordable, namely the wandering hours display that’s most famously associated with Urwerk and Audemars Piguet in modern watchmaking.

The latest offering is an extension of the brand’s strengths. Despite being its first chronograph, the Fastback Thunderbolt Chronograph is well put together, having a skeletonised front that’s intricate in detail and rich in colour that manages to preserve clarity. And it also appears to boast better fit and finish than the entry-level models, with fancy case elements like the ceramic chronograph pushers flanked by titanium guards. 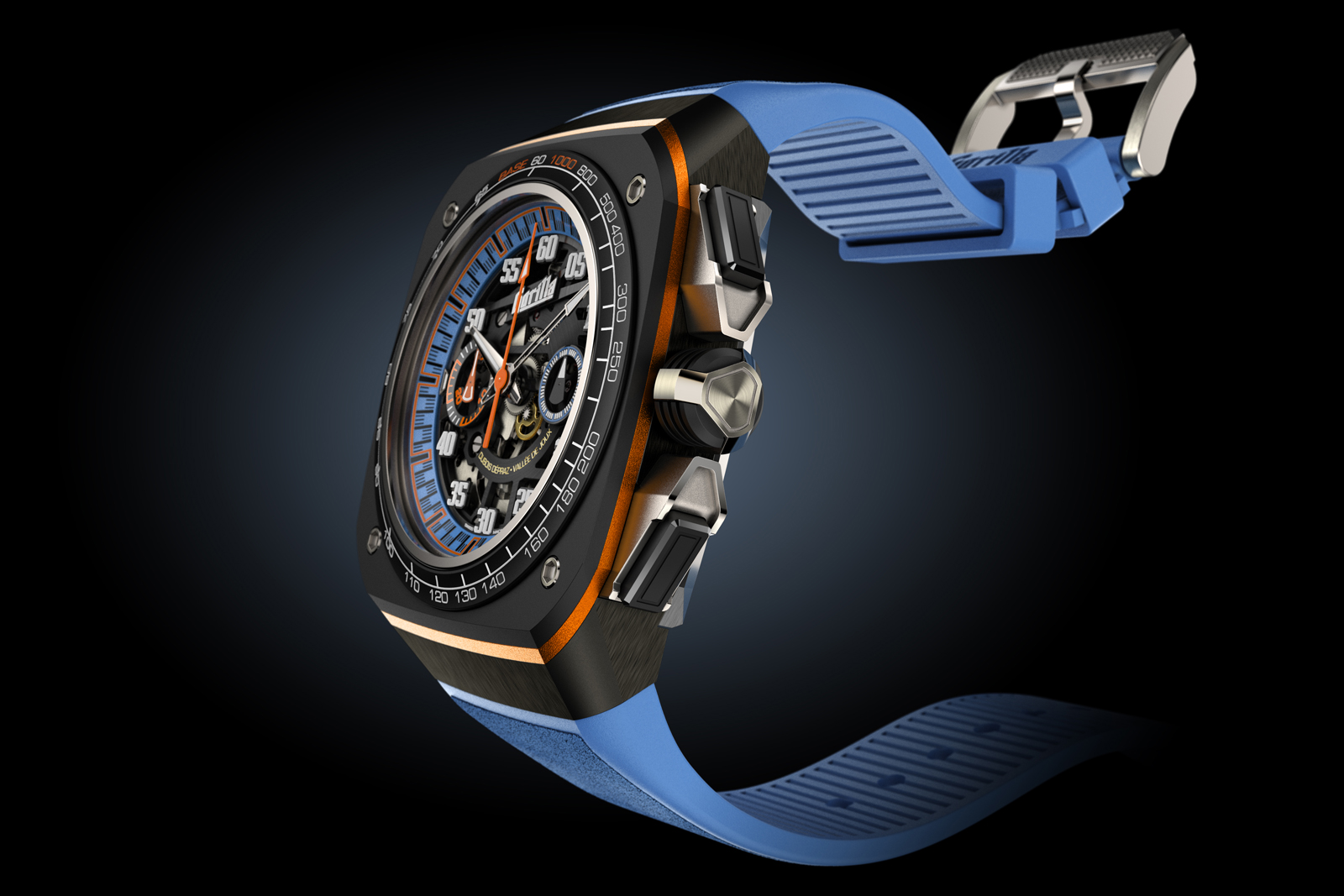 Like the brand’s other watches, the Chronograph is large at 44 mm in diameter. But it wears better than the size suggests, thanks to the short and curved lugs, as well as the lightweight titanium case. It achieves a good balance between wrist presence and wearability.

The obvious shortcoming is the price, which at US$8,500 is a lot more than the brand’s other models, over twice as expensive as the wandering hours in fact. But considering its design and construction, it is fairly good value – there’s nothing quite like that in the same price range – though it is stretching the value proposition.

At the same time, it is substantially more affordable than the comparable Bell & Ross BR-X1, a skeleton chronograph in a ceramic case that has a near-identical movement.

For those who appreciates the look of Richard Mille or Audemars Piguet Royal Oak Offshore, this is a fun and relatively affordable alternative. 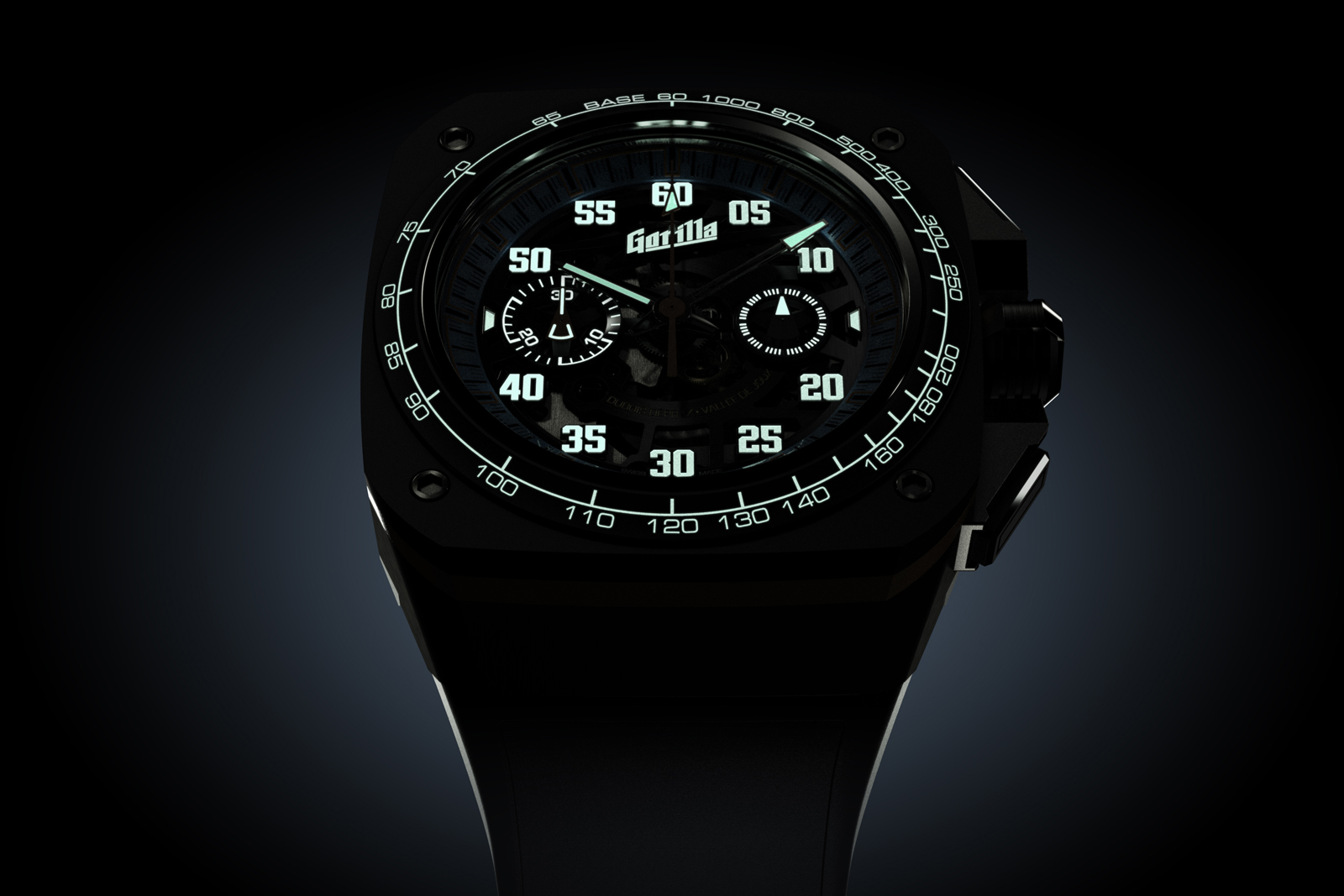 The highlight of the watch is the skeletonised face, which is designed in a thoughtful manner. Strictly speaking, the open-worked appearance is not skeletonising – specifically open-worked movement components – but instead through effective utilisation of the dial elements. 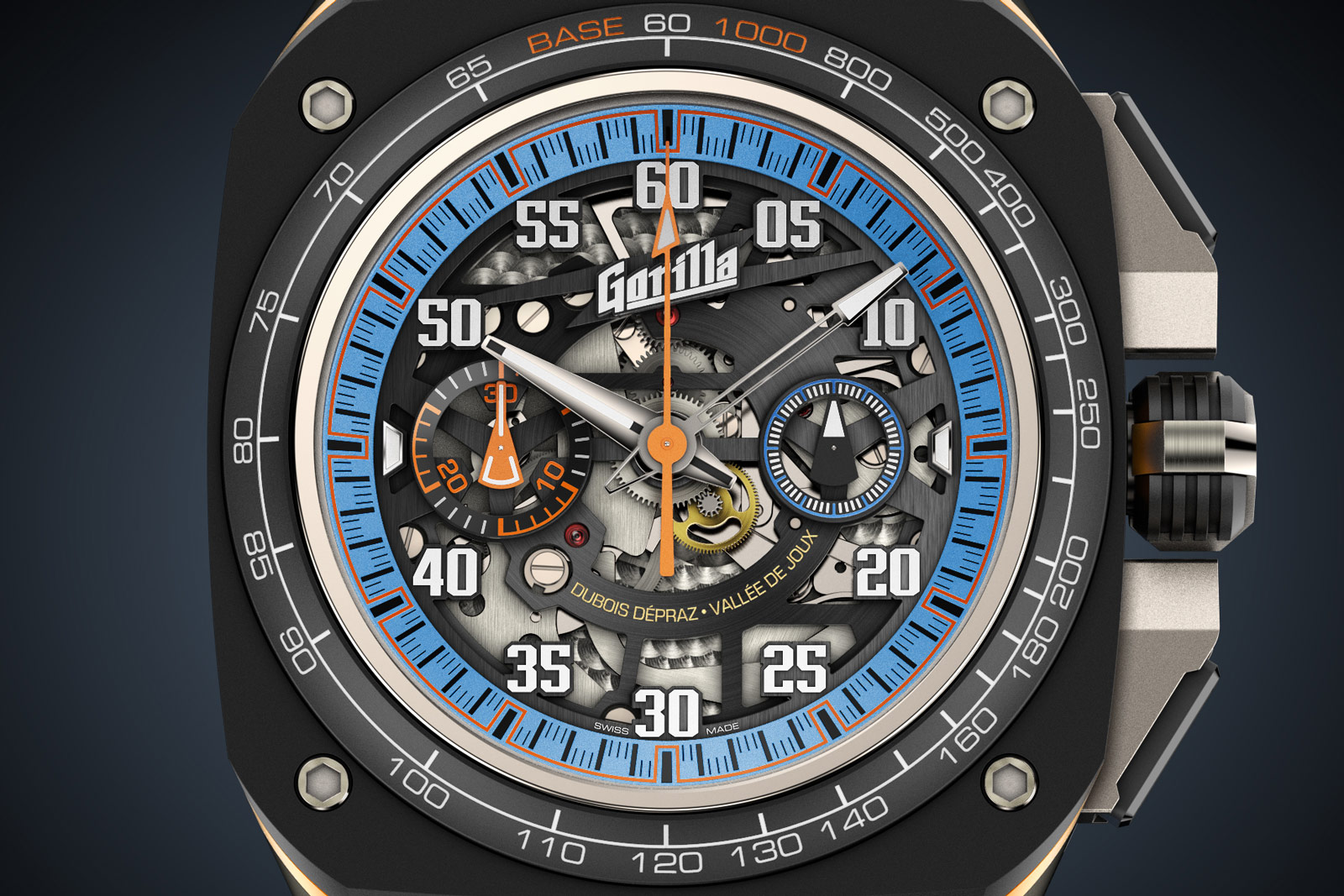 To understand the faux skeletonisation, it’s helpful to understand the layers of the movement, which is a modular construction with the chronograph mechanism mounted onto the dial side.

Gorilla has capitalised on this architecture, despite modular calibres usually being less desirable than traditional, integrated movements. No movement components were open-worked, instead the movement is topped with a skeletonised, black-coated dial, revealing the chronograph mechanism underneath. 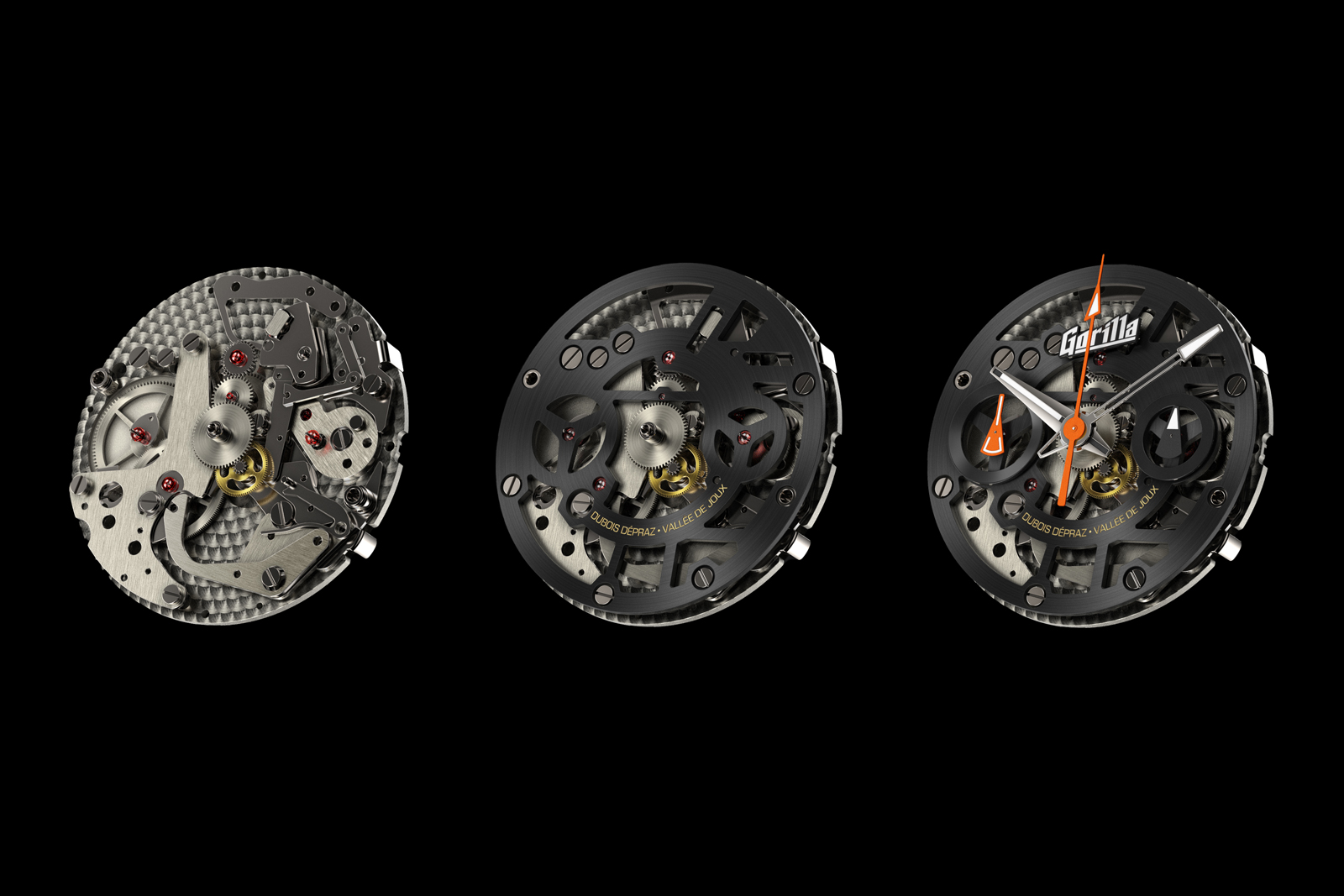 But it won’t look good unless the finishing is sufficiently appealing, which is the case here. The finishing is done in a neat, workmanlike manner, as demonstrated by the circular or straight graining on the bridges, as well as the relatively tight perlage on the base plate.

The same finishing standard is applied to the rest of the watch, with the most impressive parts being the crown and chronograph pushers, which are ceramic surrounded by titanium components – each machined into the requisite complicated shape. 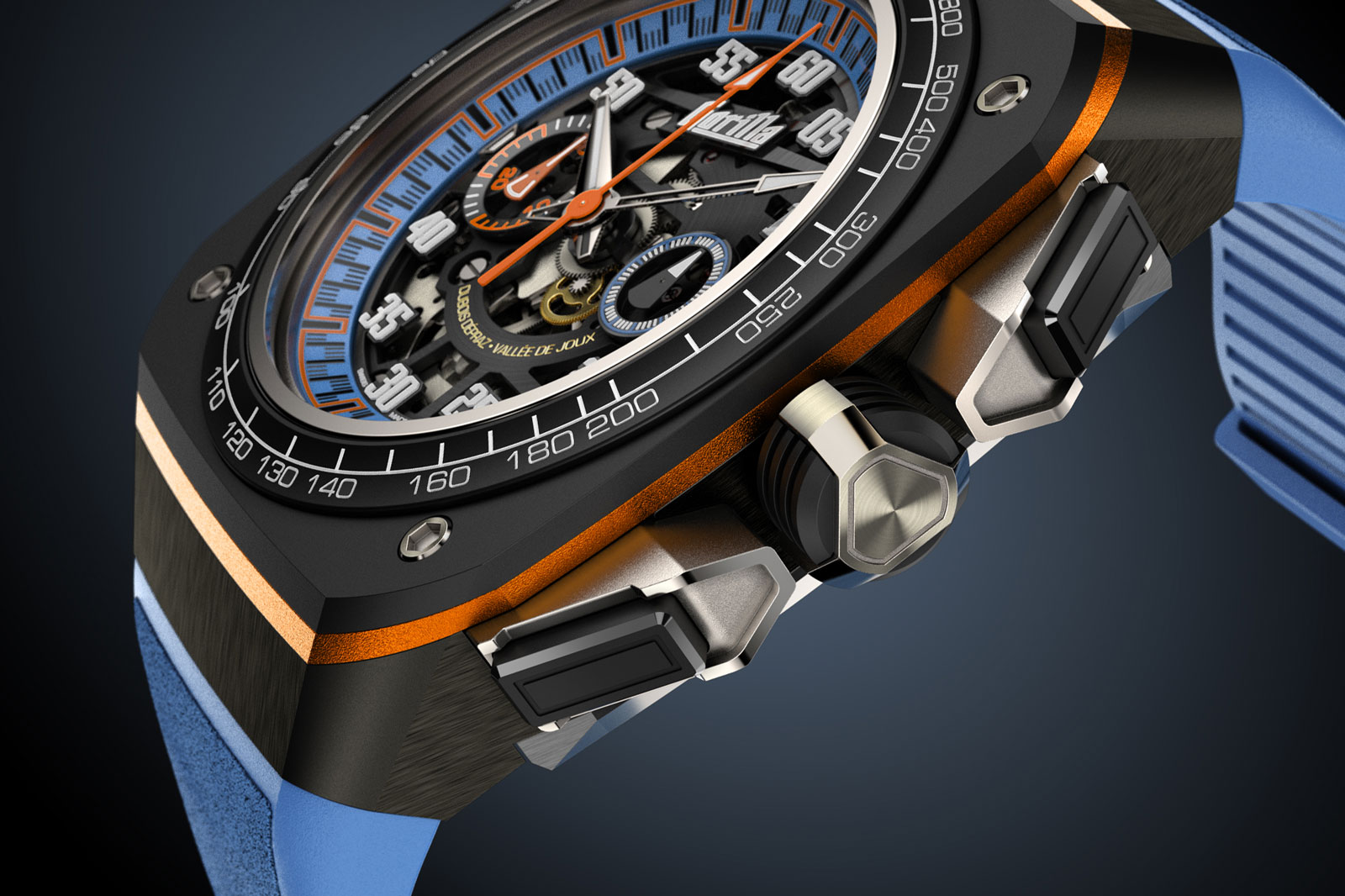 Update July 16, 2021: Included the height of the case. Also, the Fastback Thunderbolt Chronograph is limited to 99 pieces with pre-order starting now and deliveries in December. It is not limited to 500 pieces available in July as stated in an earlier version of the article.