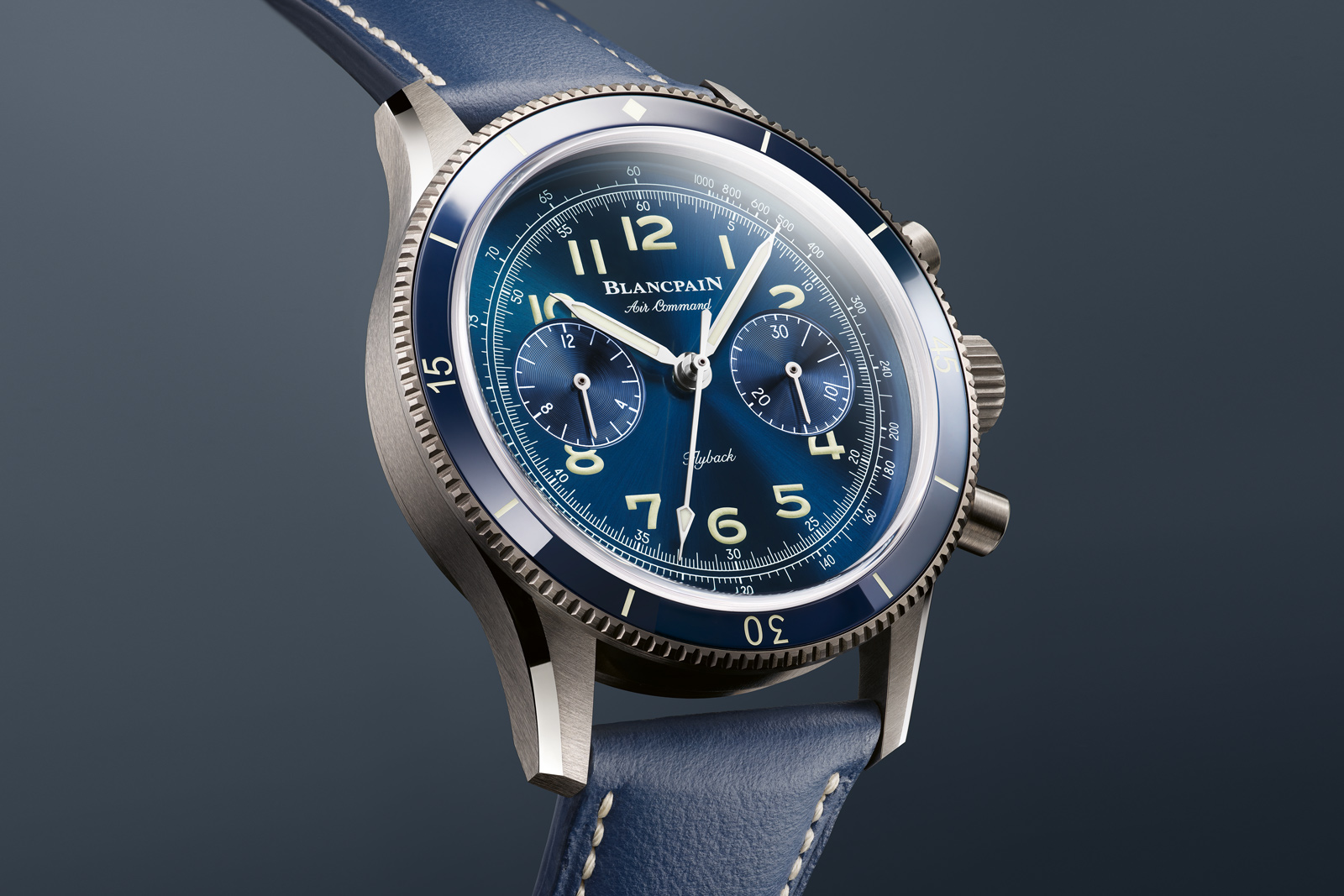 Resurrected two years ago with modern materials and tech, the Air Command was originally a 1950s wristwatch reputedly created for the US Air Force that was never serially produced, resulting in just a dozen examples made.

With the success of the vintage-looking 2019 remake, Blancpain has followed up with the regular-production Air Command Flyback Chronograph in a modern palette, with a blue dial and a case in either titanium or red gold. 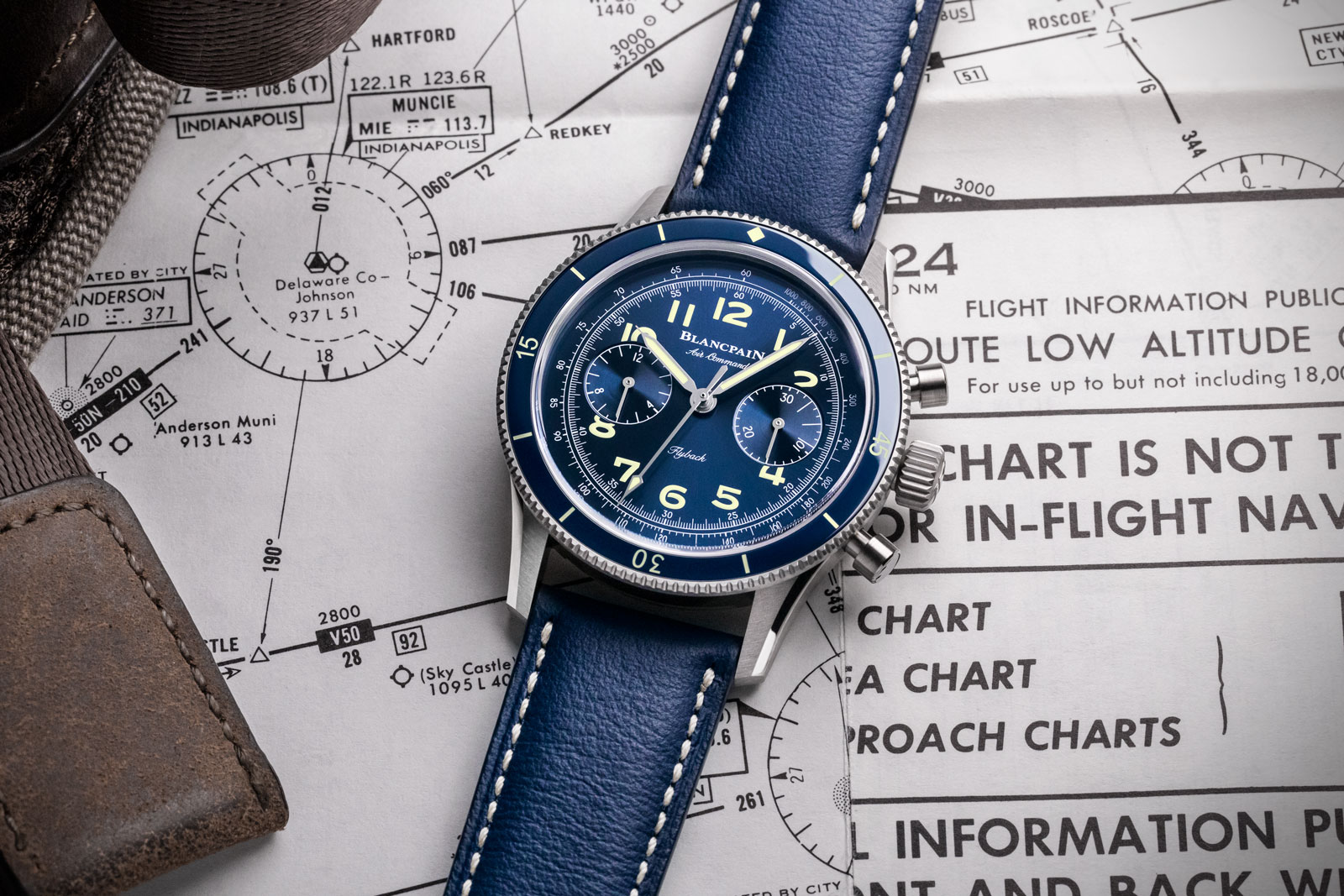 The Air Command reissue of 2019 was a hit. The 500-piece run sold out quickly and and now sells for slightly above the original retail price – a feat for a modern-day Blancpain.

Unsurprisingly, Blancpain has stuck to the same successful formula with the new Air Command, which retains the same case and design, but manages to look quite different (and will no doubt feel different thanks to the case metal). 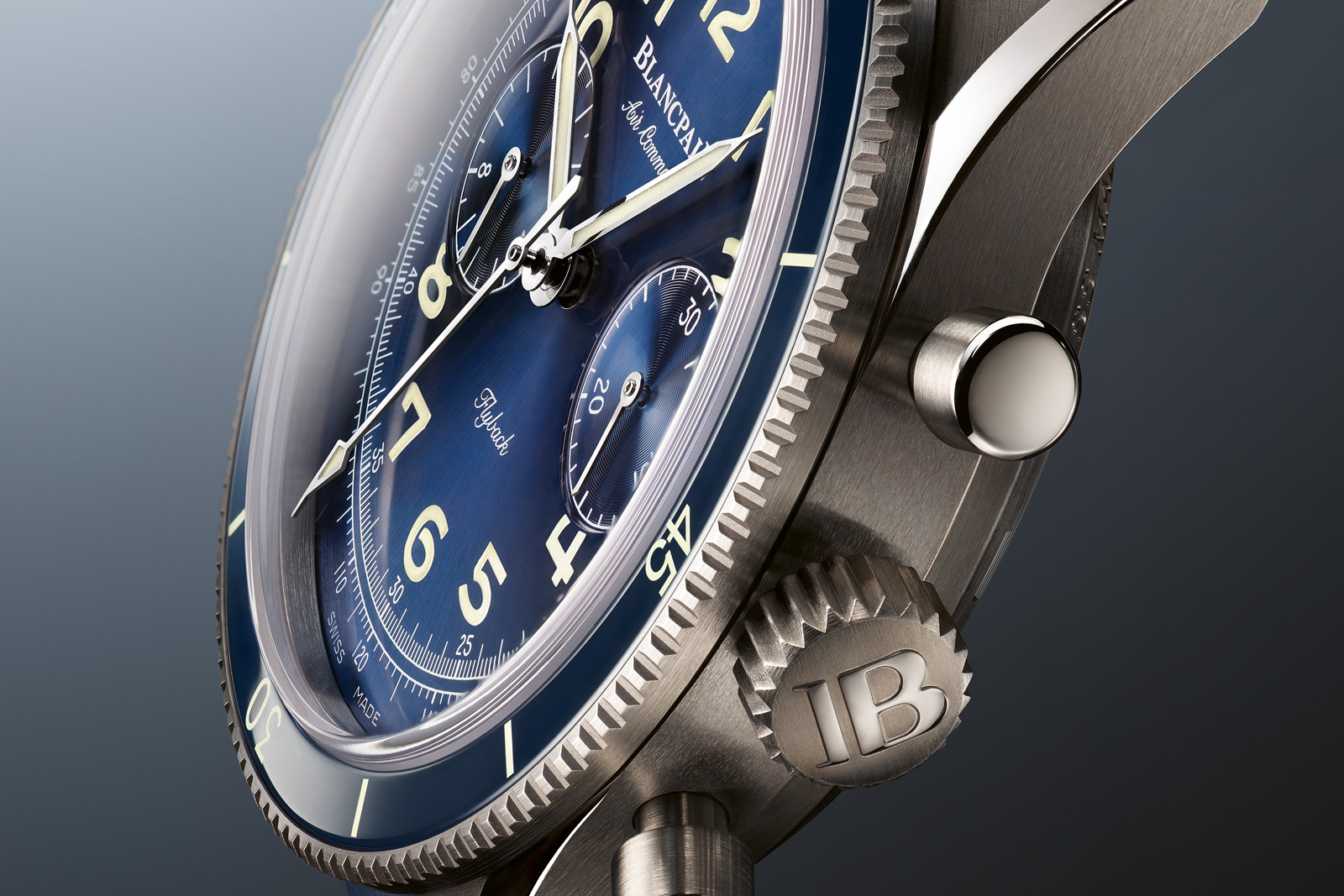 With its livelier colours, the latest version is arguably more striking than the original remake. At the same time, it avoids the pitfall of trying too hard to look vintage, as was arguably the case with the original limited edition.

And the gold version makes sense as well. The Air Command is clearly a luxury-sports watch rather than a military-issue instrument, so 18k gold feels right at home with the design. For those who find titanium too dull or too affordable, the gold version is certainly the one to go for.

Notably, Blancpain has done away with one of the coolest features of the limited edition – the propellor-shaped rotor in 18k red gold. That certainly helps set the limited editions apart from the new Air Command that is regular-production. 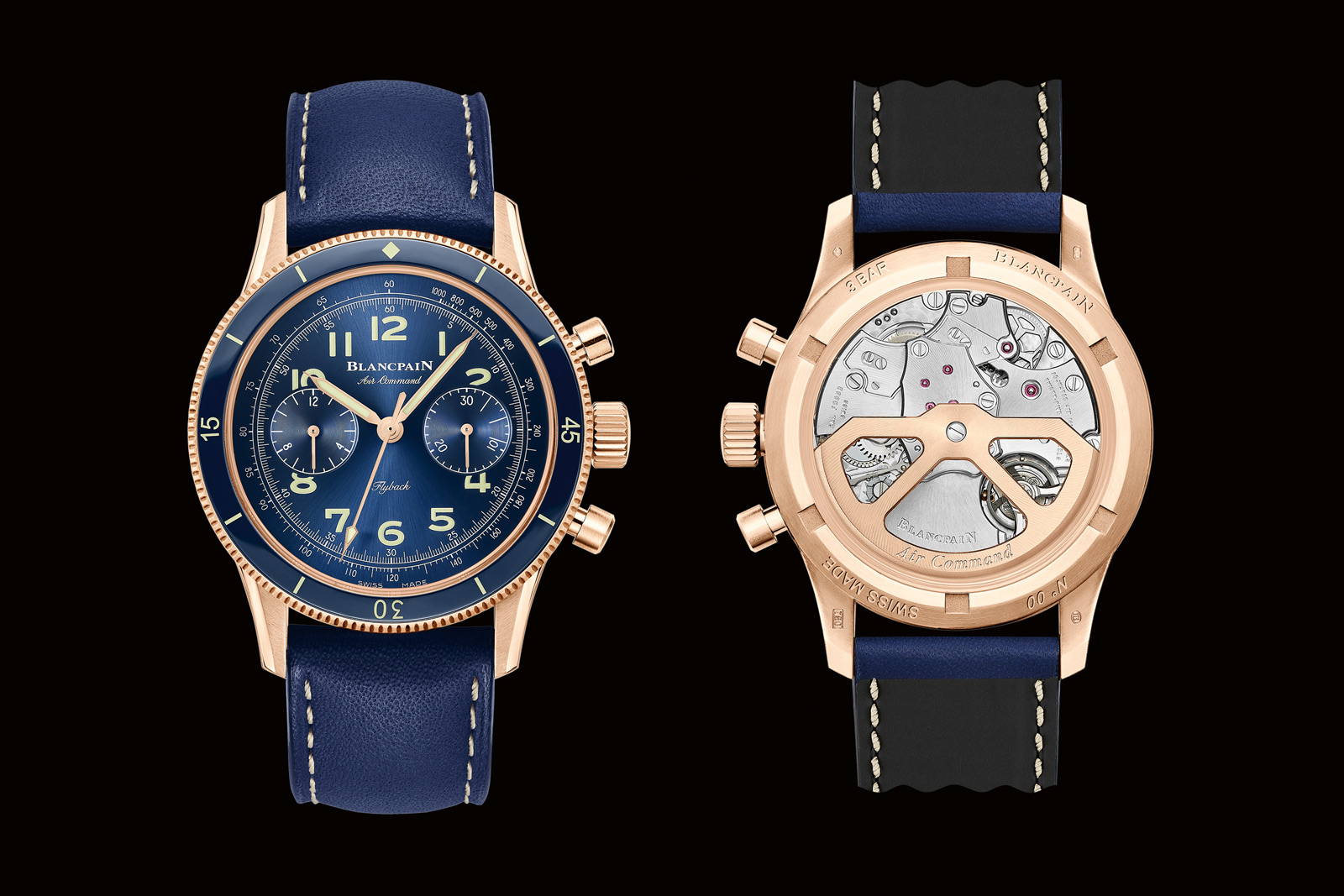 The Air Command starts at US$18,500 in titanium, which is almost identical to the price of the limited edition in steel. It’s arguably a better value proposition than the original given the case material.

The key difference between the new version and the 2019 limited edition is aesthetics. While the original was clearly retro – it combined a matt black dial with faux-vintage lume – the new Air Command is modern.

It has a metallic blue dial with radial finish that gives it more reflectivity. At the same time, it has fresh green Super-Luninova, steering away from the mock-aged look found on the limited edition. 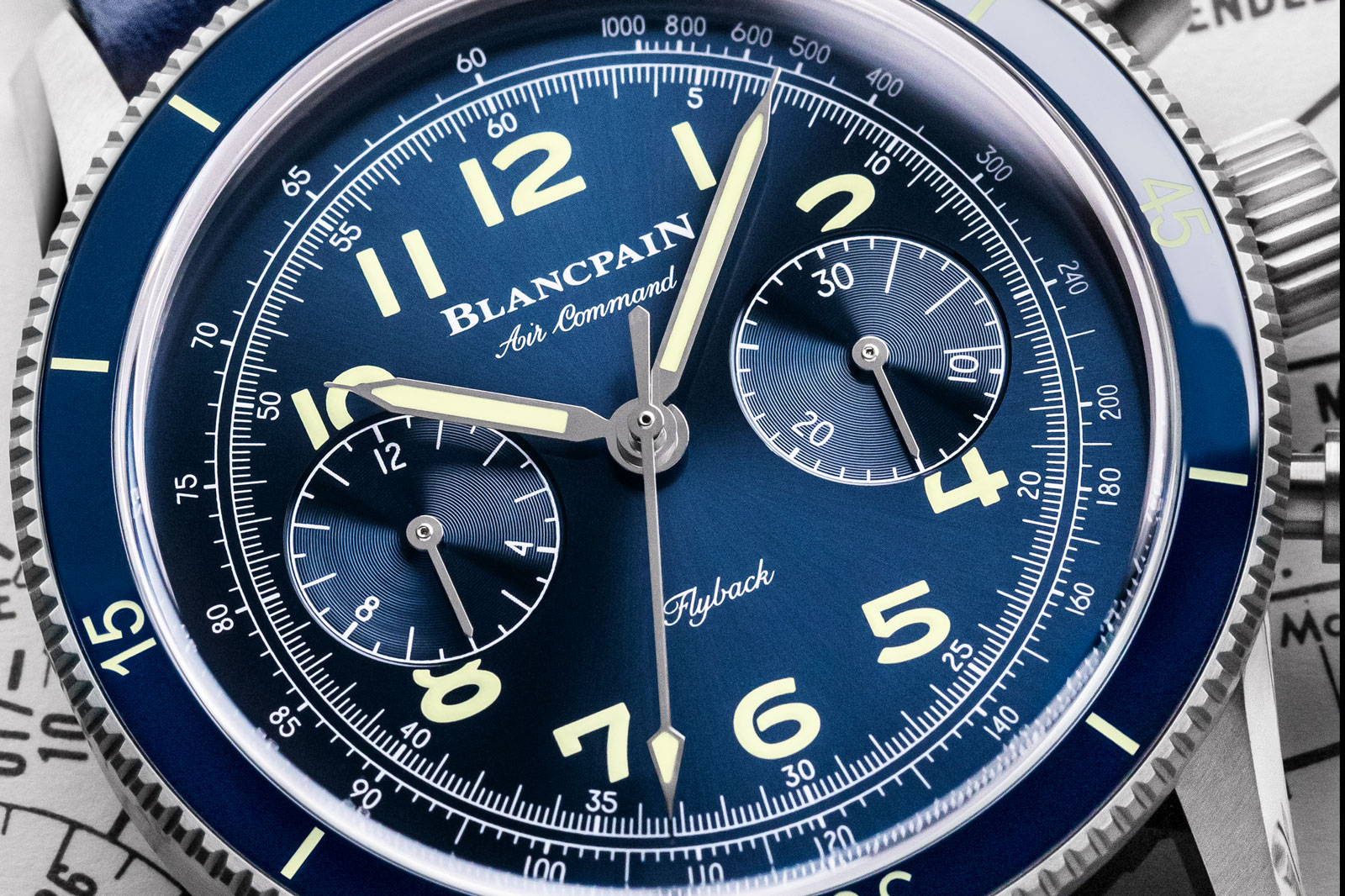 Despite being large at 42.5 mm, the watch has a well-proportioned dial. That’s in part due to the tachymeter on the outer section of the dial as well as the countdown bezel, which shrinks the central portion of the dial, allowing the sub-dials to be properly sized.

But a more important reason for the excellent layout is the large movement, which clocks in at 31.8 mm wide. The movement is impressively high-spec: it features a vertical clutch and column wheel, flyback function, as well as a non-magnetic silicon hairspring attached to a free-sprung balance that beats at a high frequency of 5 Hz, or 36,000 beats per hour. 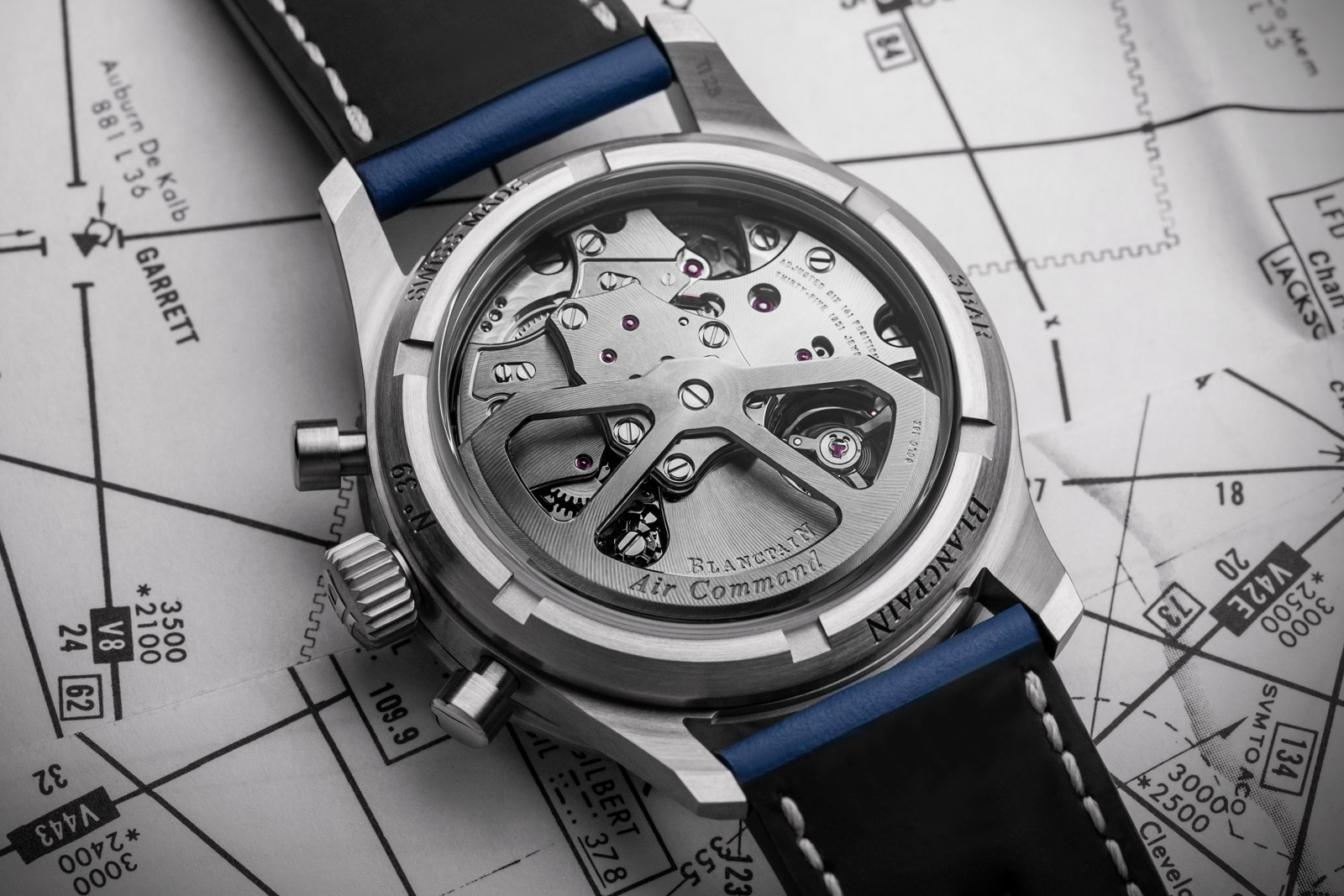 The finishing is typical of Blancpain, neat and clean with refined details. It’s a mix of machine- and manually-executed finishes. Notably, some of the bevelling on the bridges is mirror finished and rounded, indicating it was completed by hand.