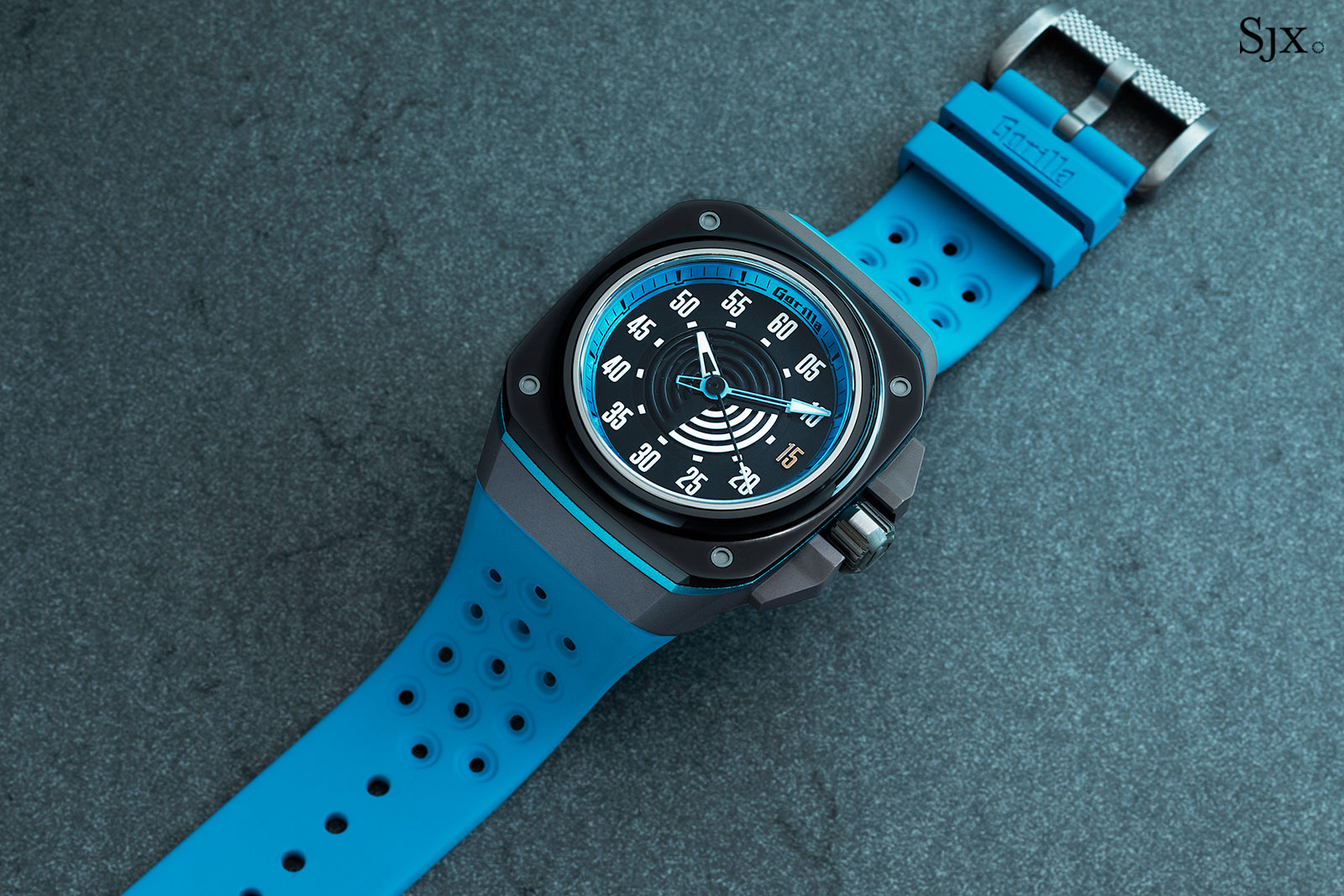 Despite being one of many recent startups specialising in stylish, affordable watches, Gorilla has managed to set itself apart from a crowded field by creating watches that are well designed and smartly detailed. That’s because the Gorilla was founded in 2016 by two veterans watch design: Lukas Gopp, an alumni of IWC and Audemars Piguet, and the better known of the pair, Octavio Garcia.

Mr Garcia spent almost 15 years at Audemars Piguet, five of them as chief designer; one of his most famous and successful creations was the Royal Oak Offshore “Alinghi” in forged carbon, one of the hottest watches of the mid-2000s.

Gorilla now only offers essentially a single model – the Fastback – in several variations, with the design and colours inspired by 1950s American muscle cars. And it is obvious that several of its watches are reminiscent of certain Audemars Piguet timepieces. But with the Gorilla watch case having a distinctive profile of its own, coupled with the fact that most of its watches cost less than US$800, Gorilla watches have an easy appeal. 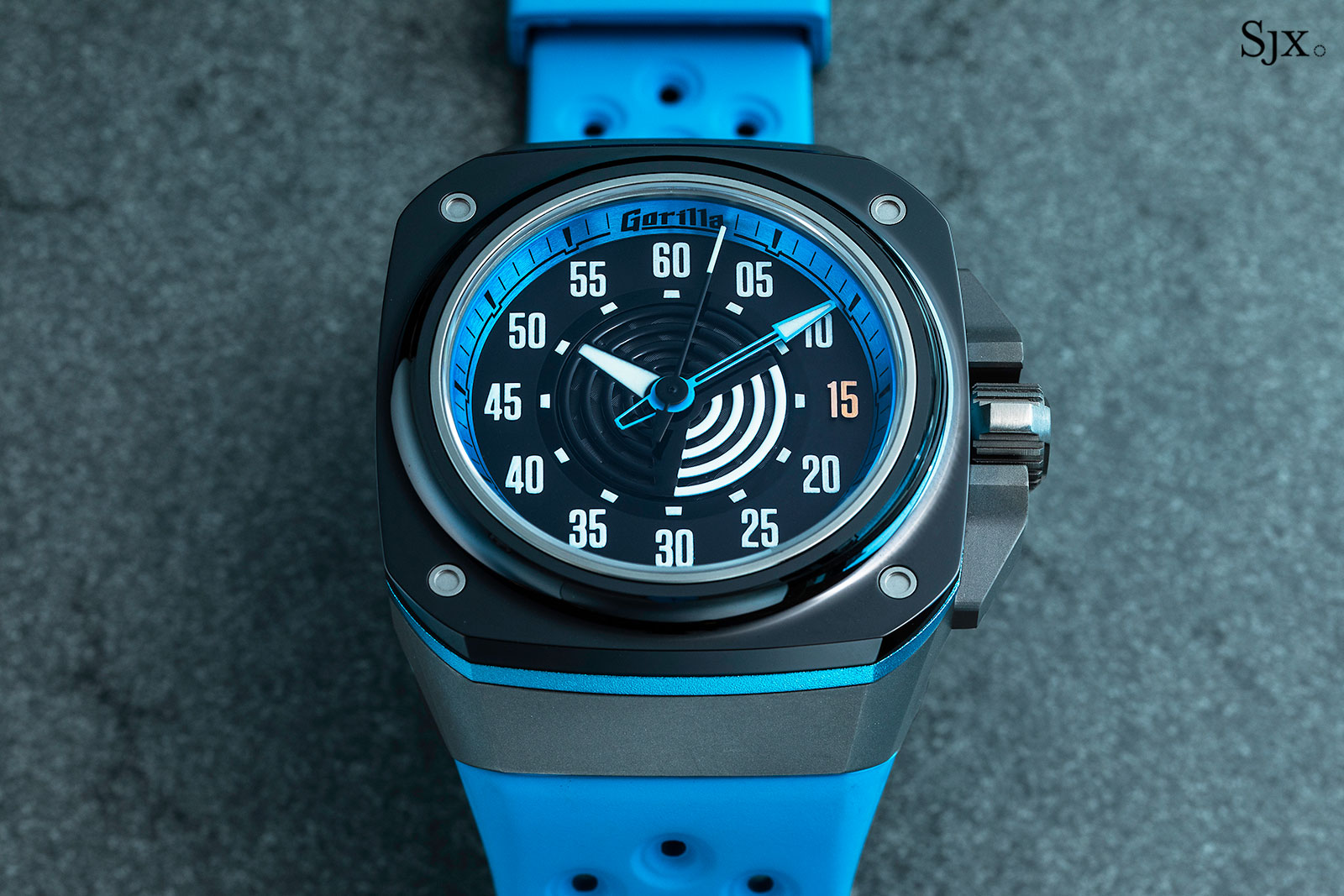 This particular Gorilla is a limited edition made for the 15th anniversary of Red Army Watches, a Singapore-based retailer that specialises in affordable watches; amongst the other brands it carries are SevenFriday and Grand Seiko. 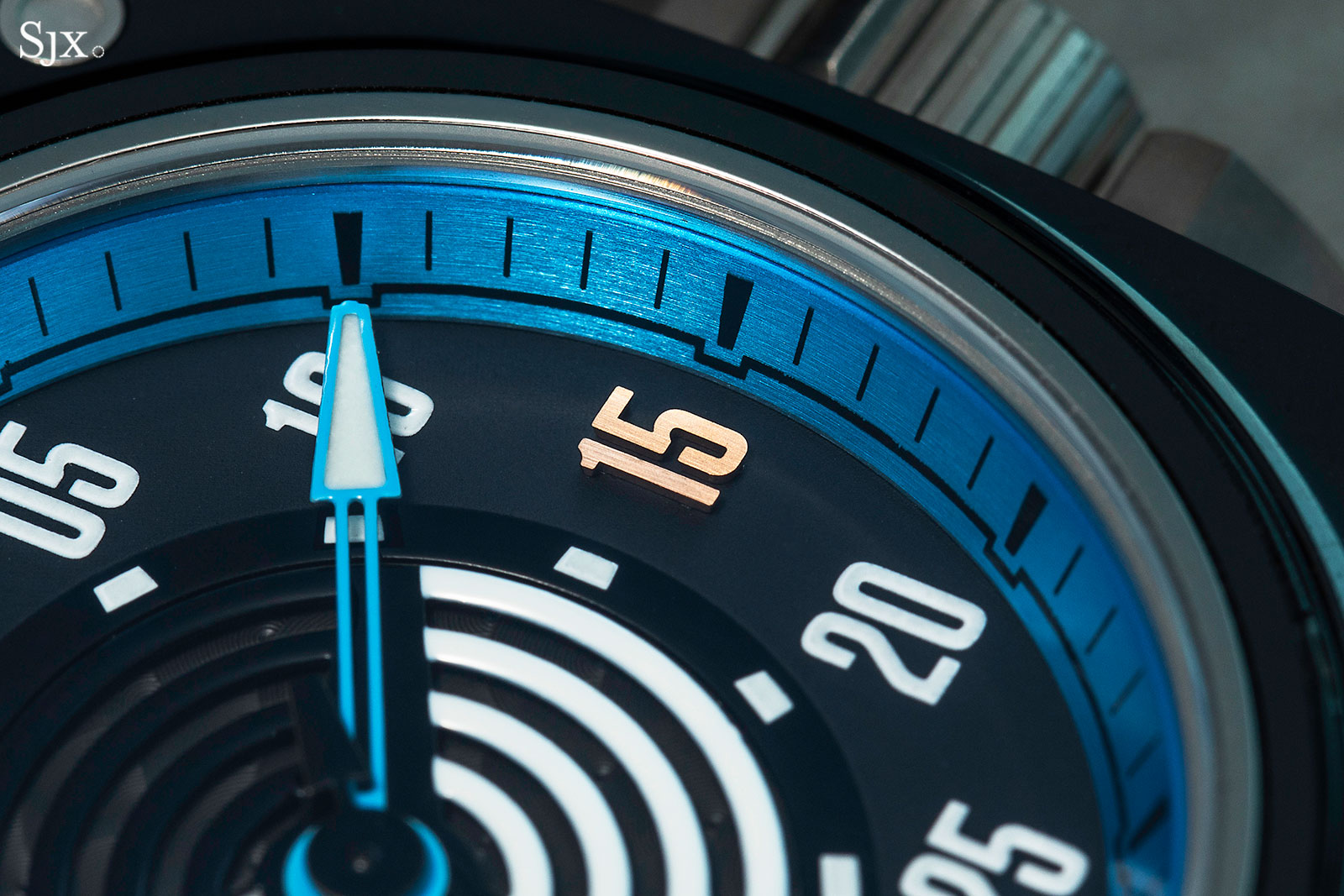 Formally known as the RAW x Gorilla Fastback Celebratory Edition, the watch is not drastically different from the standard model that serves as the base, the Fastback Galaxy Blue. The only differences are the red-gold plated “15” on the dial as well as the case back engraving. Though minor, the gilded “15” is useful in giving the watch a slightly more upscale look.

But because the Fastback watches are similar – the case dimensions are, in fact, all identical – this limited edition serve as a proxy for the rest of the collection.

It’s a certainty that the bulk of the cost of a Fastback goes into the case and dial. Excepting the top of the line, wandering hours Fastback Drift, the movement is there to keep time and stay hidden.

The case is an excellent example of simple yet strong design. It’s essentially a stack of four levels, starting with black ceramic on top, followed by an anodised aluminium ring, the titanium case middle, and lastly the flat titanium case back. 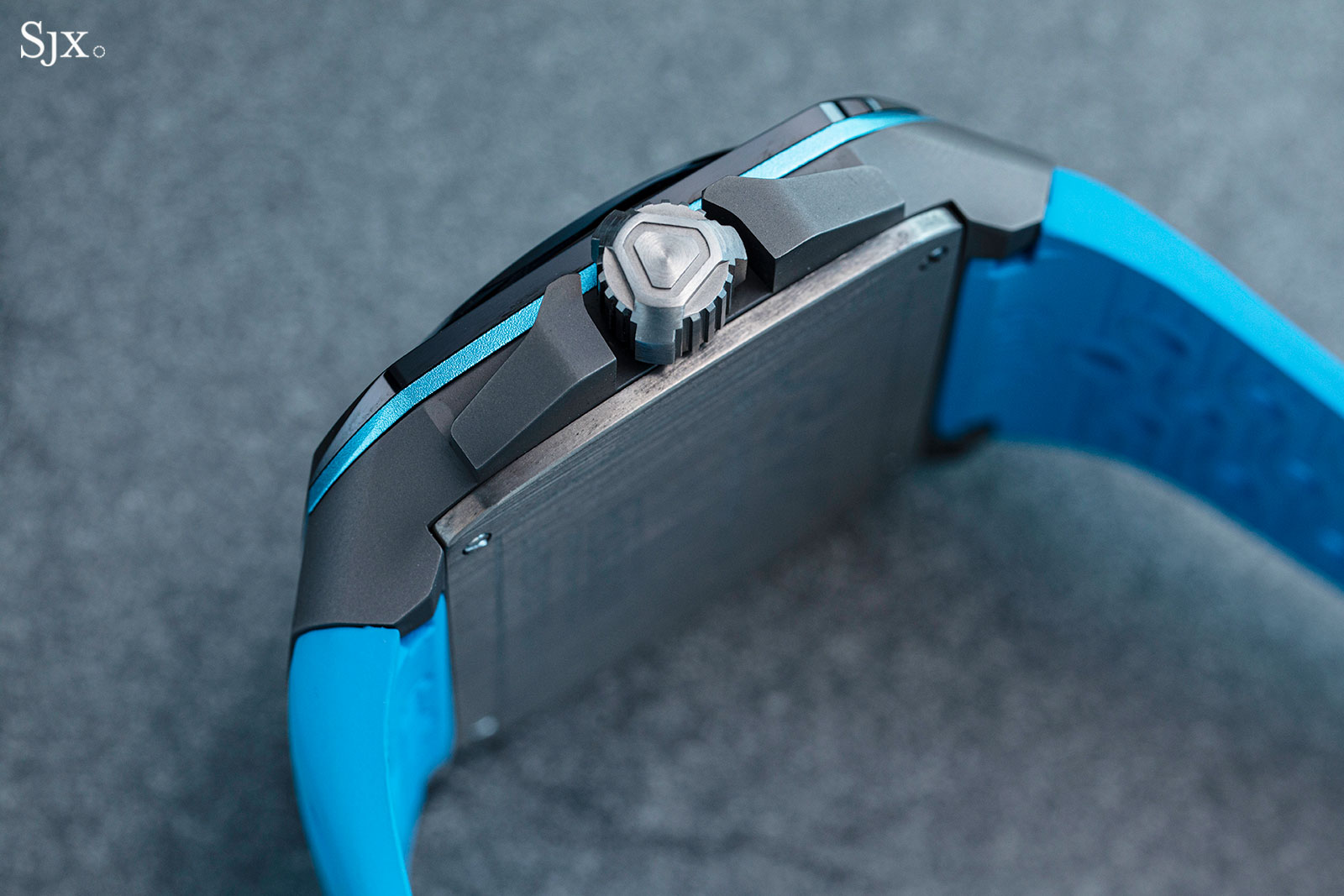 This gives the watch a layered appear from both the front and sides, while also allowing for a mix and match of materials that creates contrast. Other Fastback models swap the titanium for carbon composite, though the aluminium and ceramic bits are a recurring feature, albeit in different colours. 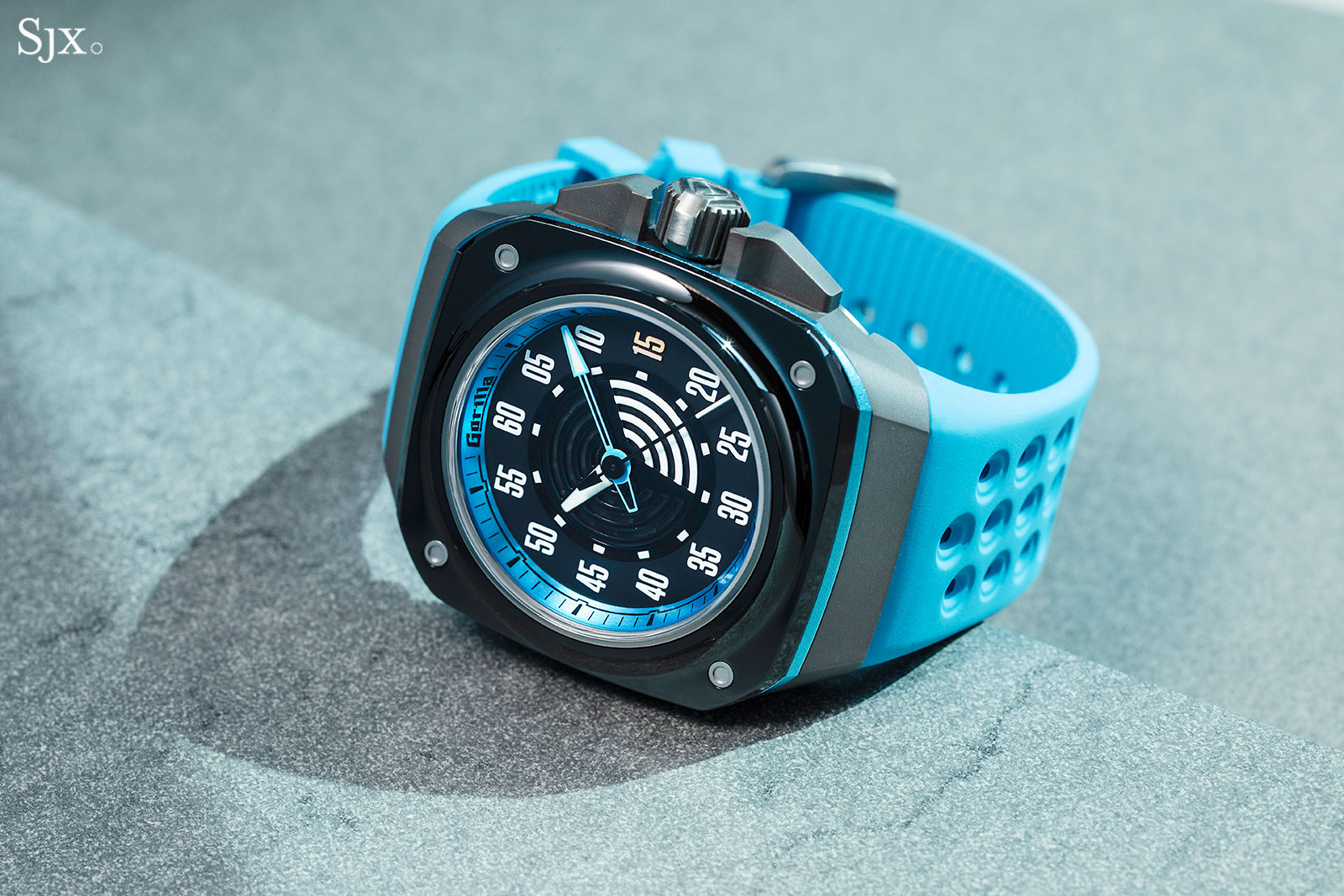 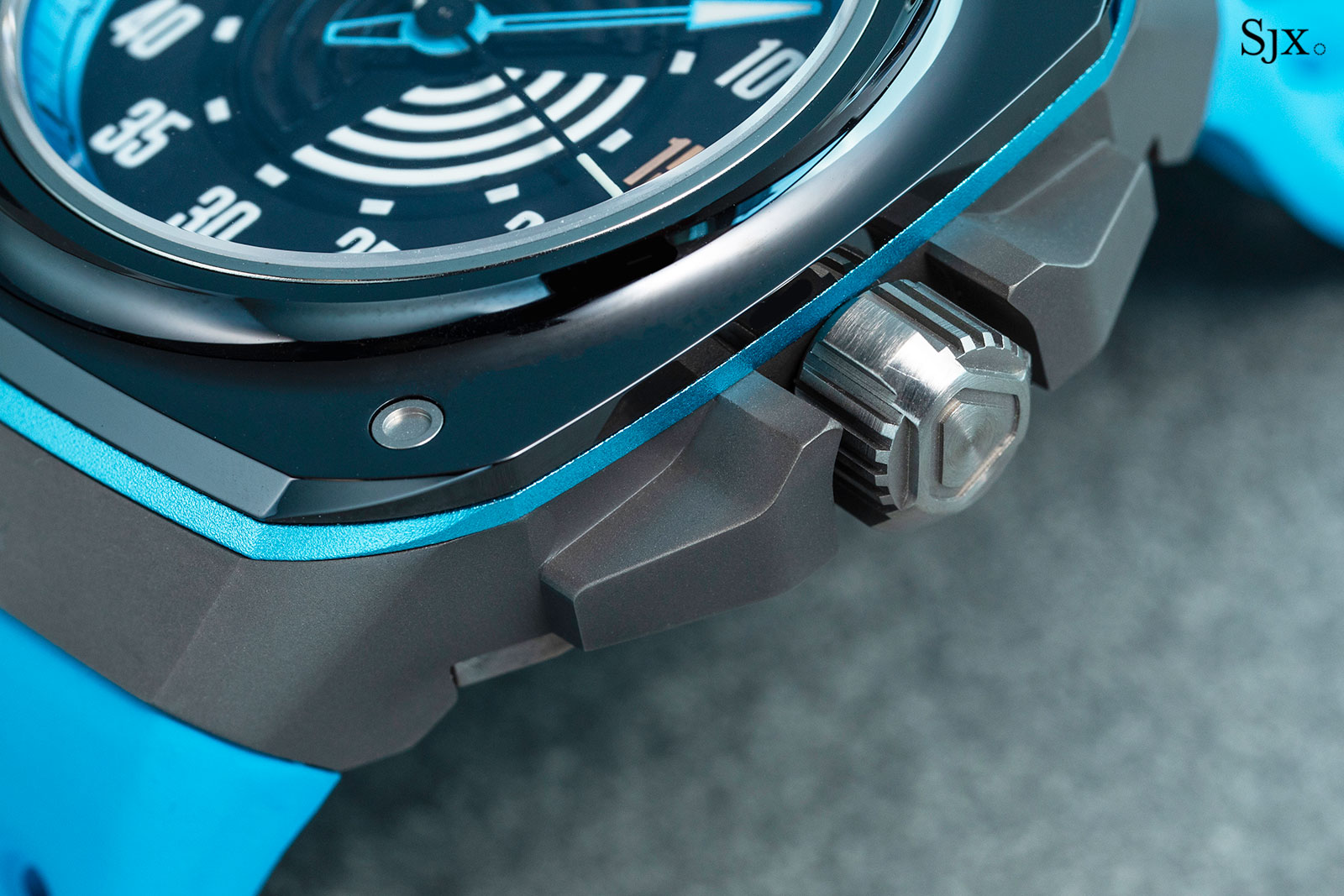 All four levels are secured via four screws on the case back. The water-resistance is a practical 100m, despite the basic, sandwich case construction. 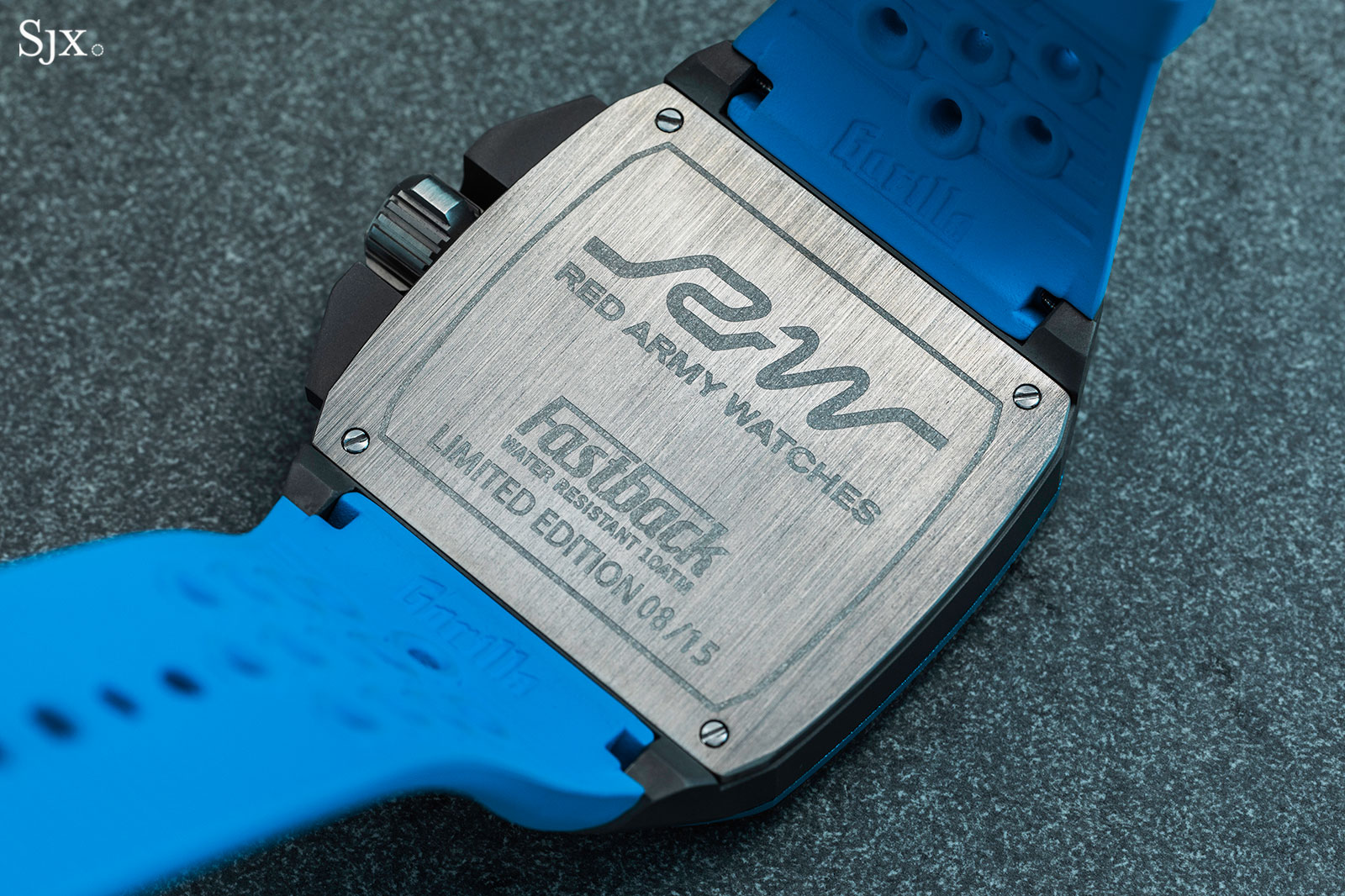 Interestingly, what looks like four screw heads on the bezel appear to be merely decorative, being rounded heads that are neither screws nor nuts. Only on the much pricer Fastback Drift are they actually hex head nuts.

All of the case components are neatly and evenly finished, except for the anodised aluminium ring. It’s uneven around the edges and doesn’t sit exactly flush with the case middle on some spots. 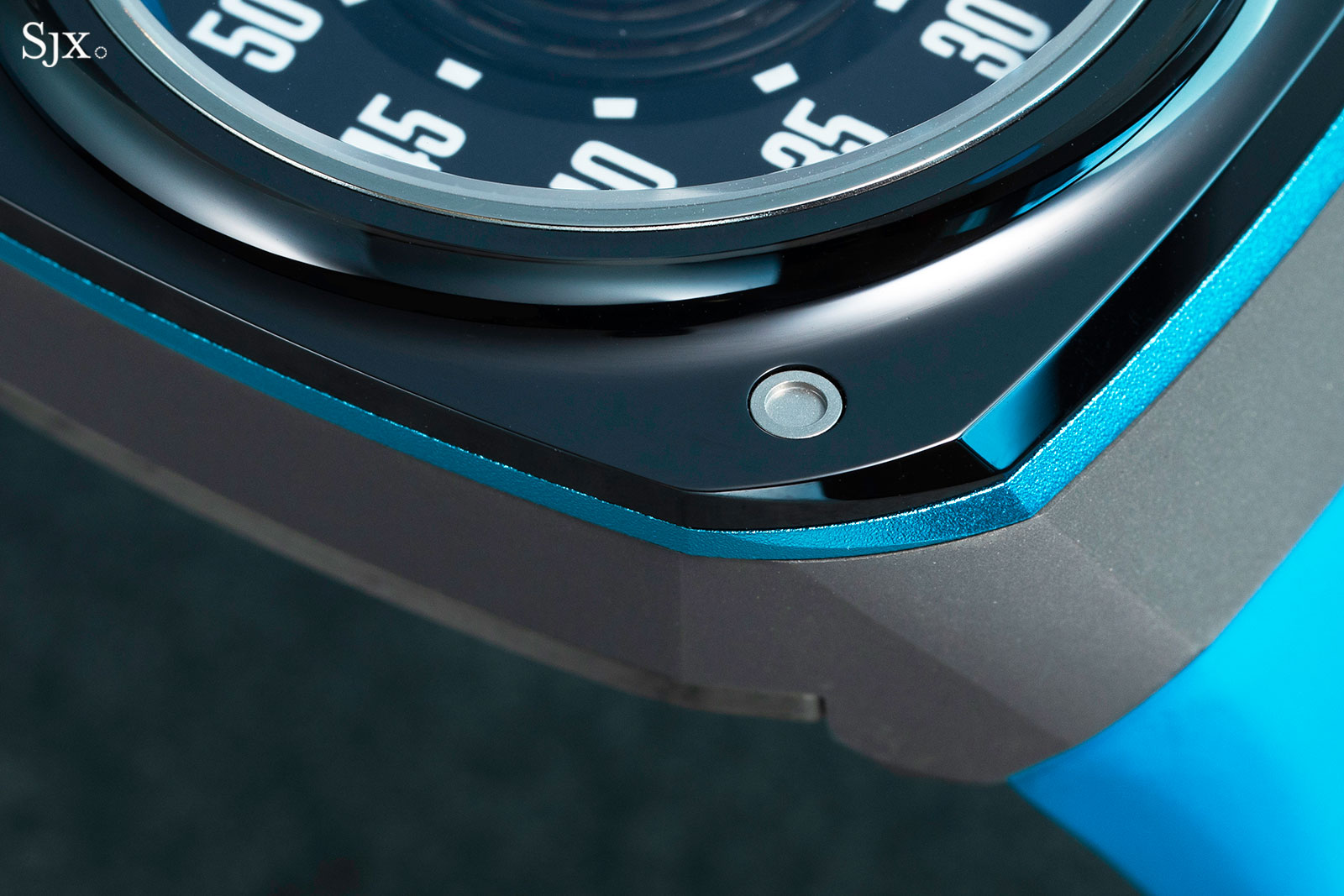 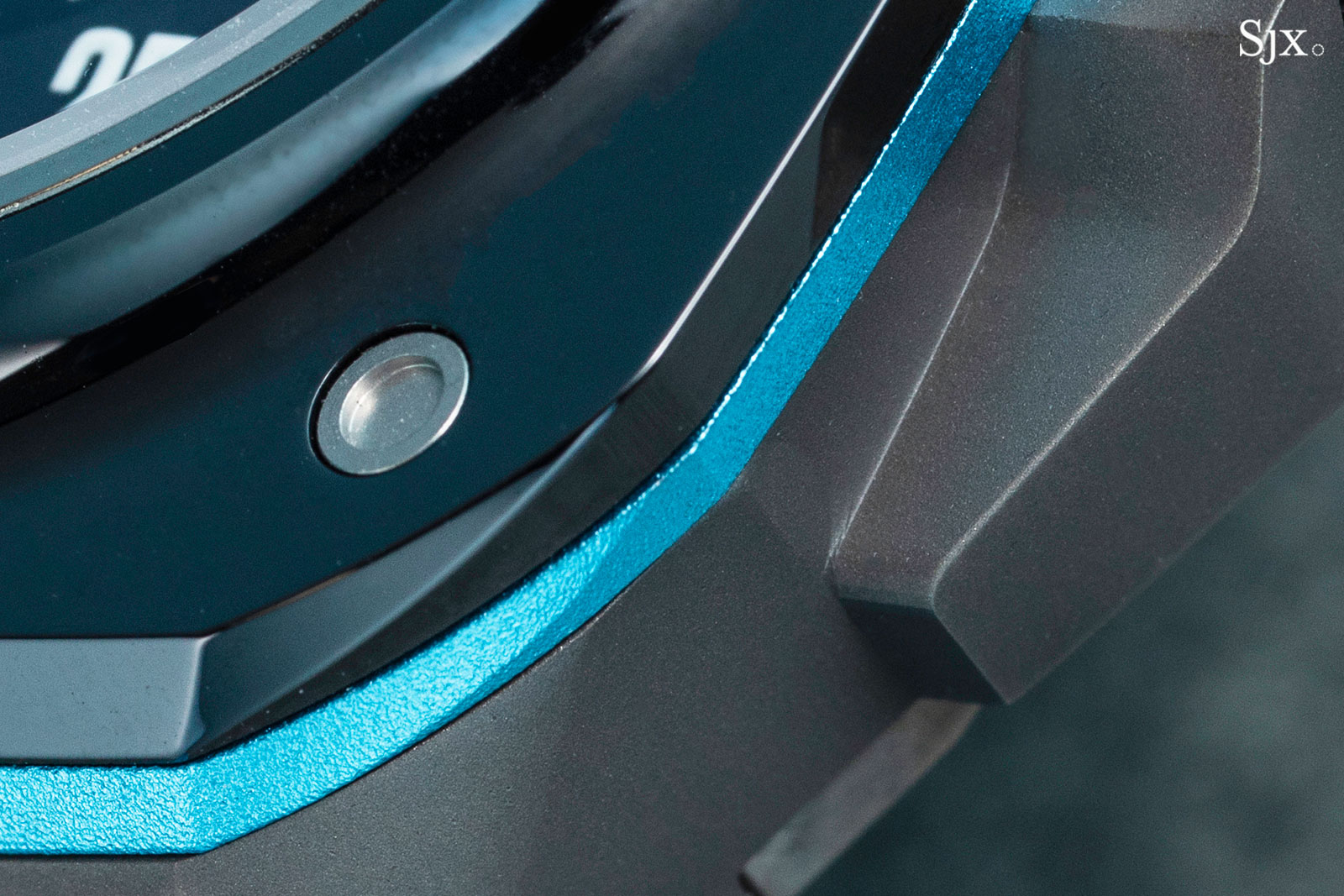 More than the case, the dial feels automotive-inspired. Minutes and seconds are indicated by conventional hands, while the hour pointer is on a central disc. Like the frame on a vintage speedometer, the steeply sloped flange in anodised aluminium gives the dial depth, which is enhanced by the open-worked central disc that is actually the hour hand.

Legibility is excellent during the day, though not so much at night as the Super-Luminova markings on the markers and hands are quite small. 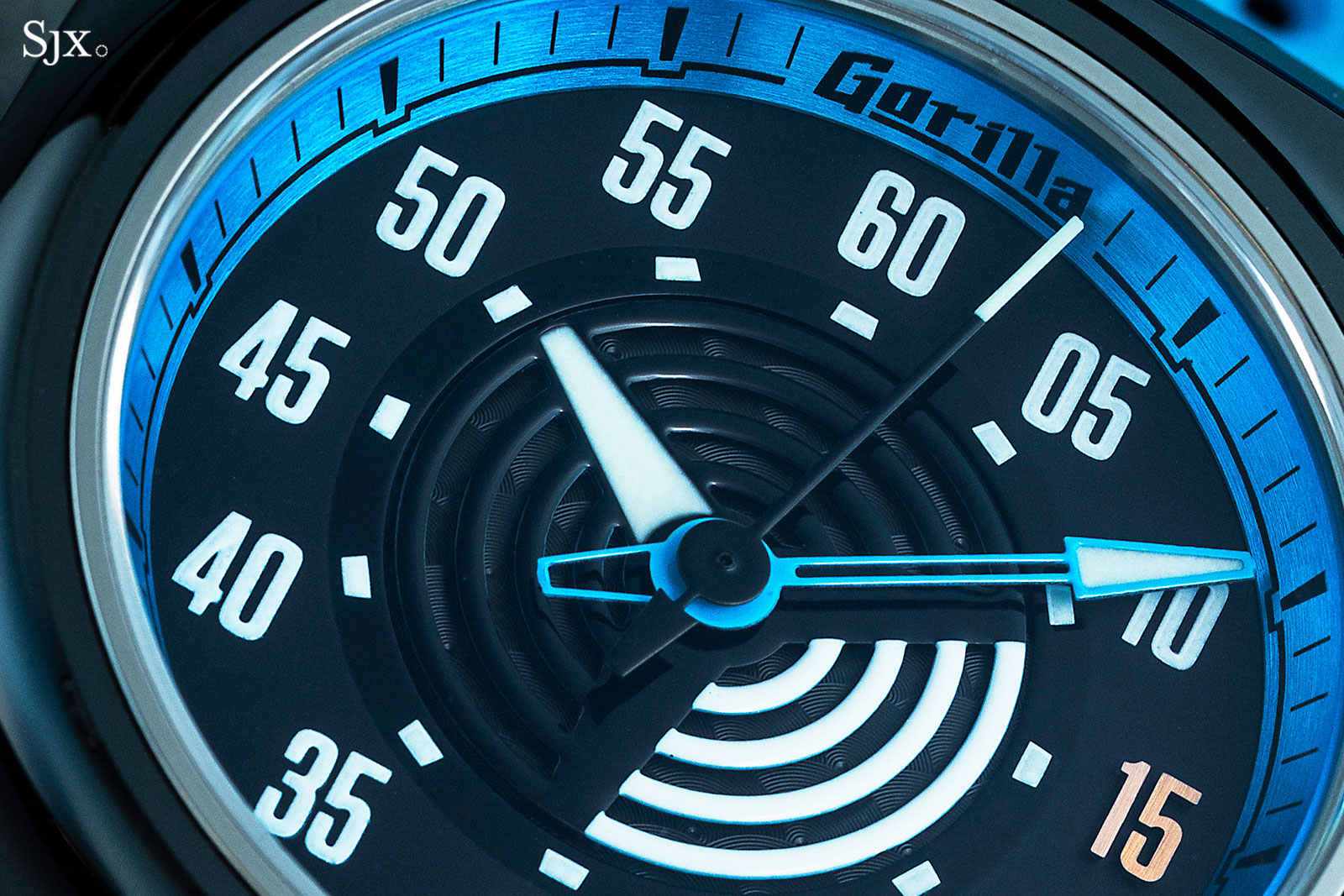 One of the best details of the dial is the precise length of both the hour and minute hands; the two hands almost touch the flange, giving the dial a good sense of proportion and balance. 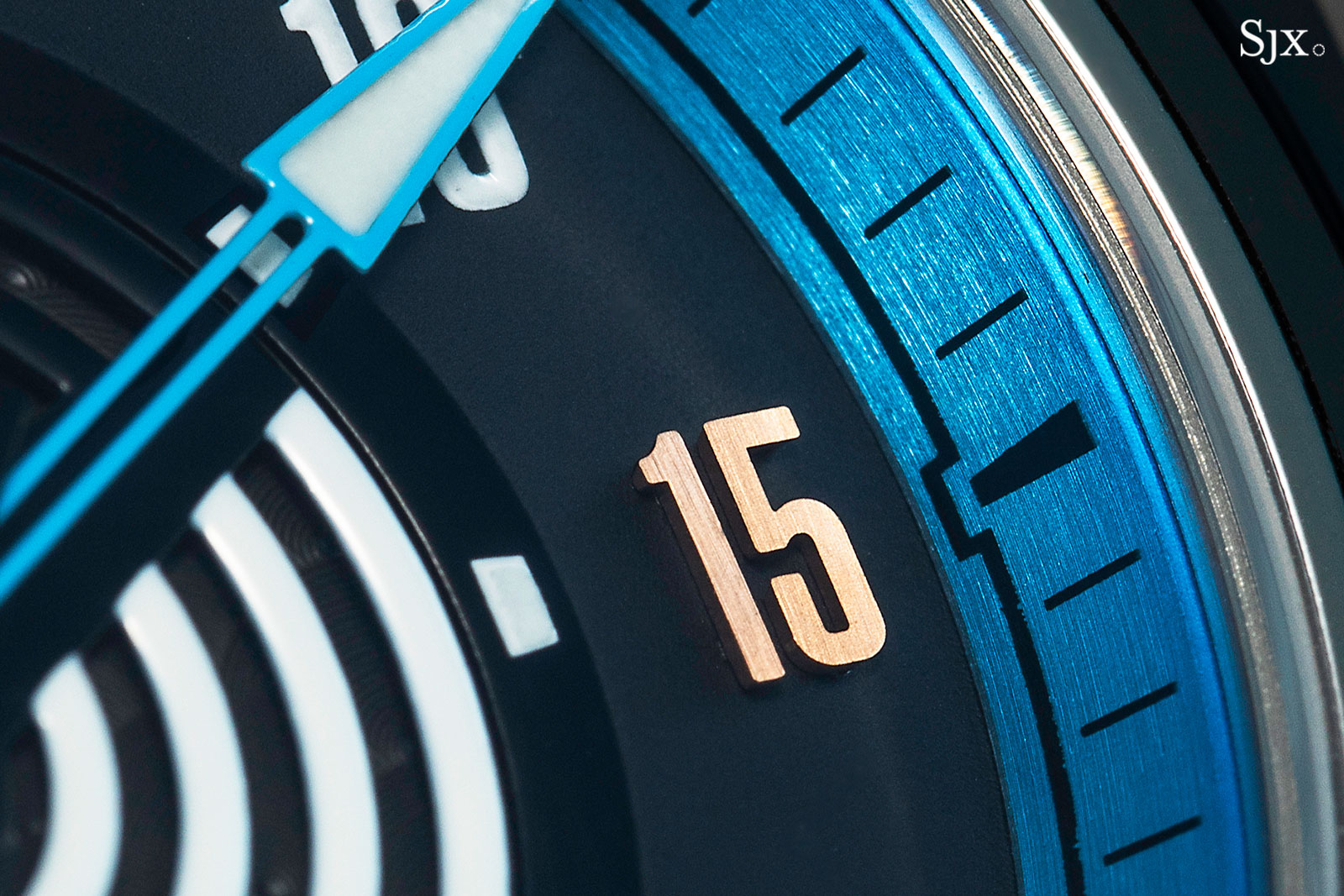 And the applied “15” that’s unique to this edition looks good even up close. Applied numerals, however, are only on the higher end Fastback GT models; the standard Fastback watches have printed numerals.

The rest of the dial is cleanly executed, although the lacquer on the hands is laid on slightly thick.

The watch is a big one, measuring 44mm in diameter and a bit under 14mm high. It certainly looks the size on the wrist.

But the good design of the case helps it sit reasonably well on the wrist. The lugs are short and curved, while the case isn’t too long. Its lightness – the watch is about 140g – also improves its wearability as it doesn’t feel unbalanced.

The only shortcoming in terms of wearability is the strap, which is available only in a single length. Though it has enough holes to fit a wide range of wrists, wearing the strap at anything less than the fourth hole from the smallest leaves a long tail on the other side.

In short, it still wears like an oversized watch, but is as ergonomic as a watch this large can be. The fact that it wear well despite the size is a major part of the appeal. 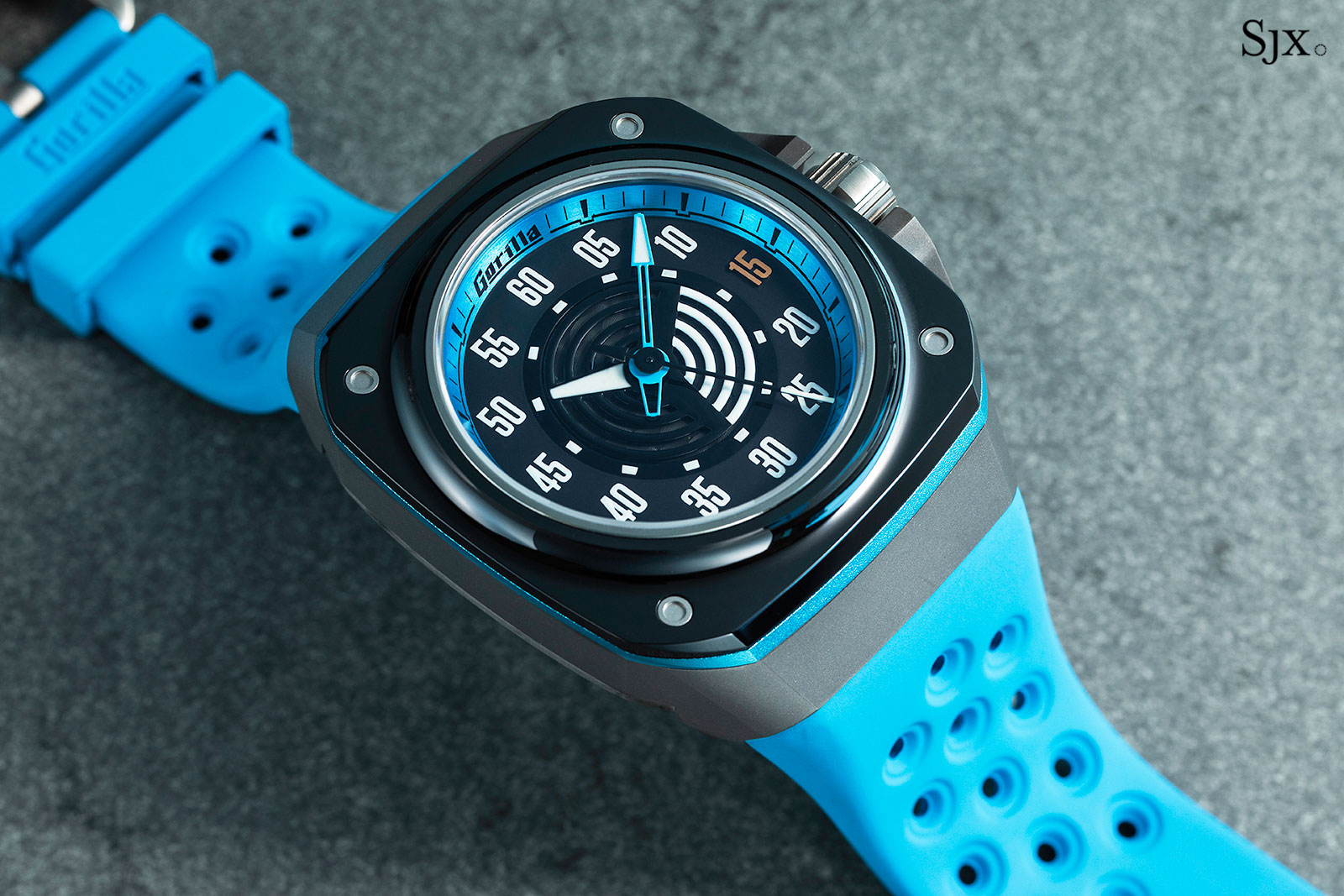 The only weakness of the entire watch is the movement inside, which is a Miyota 8215 that’s made in Japan by a subsidiary of Citizen. Its weakness is not functionality at all – the calibre is proven, robust and does the job – but the noticeable rattle of the rotor as it spins.

It’s the only aspect of the watch that gives away the price; in all other respects the watch feels like a more expensive product.

The Fastback offers significant value for money. It offers a lot of good design for the money, as well as mostly good fit and finish. Despite minor flaws, with the aluminium ring for instance, the overall quality is excellent for the price.

The standard Fastback Galaxy Blue is priced at US$790.