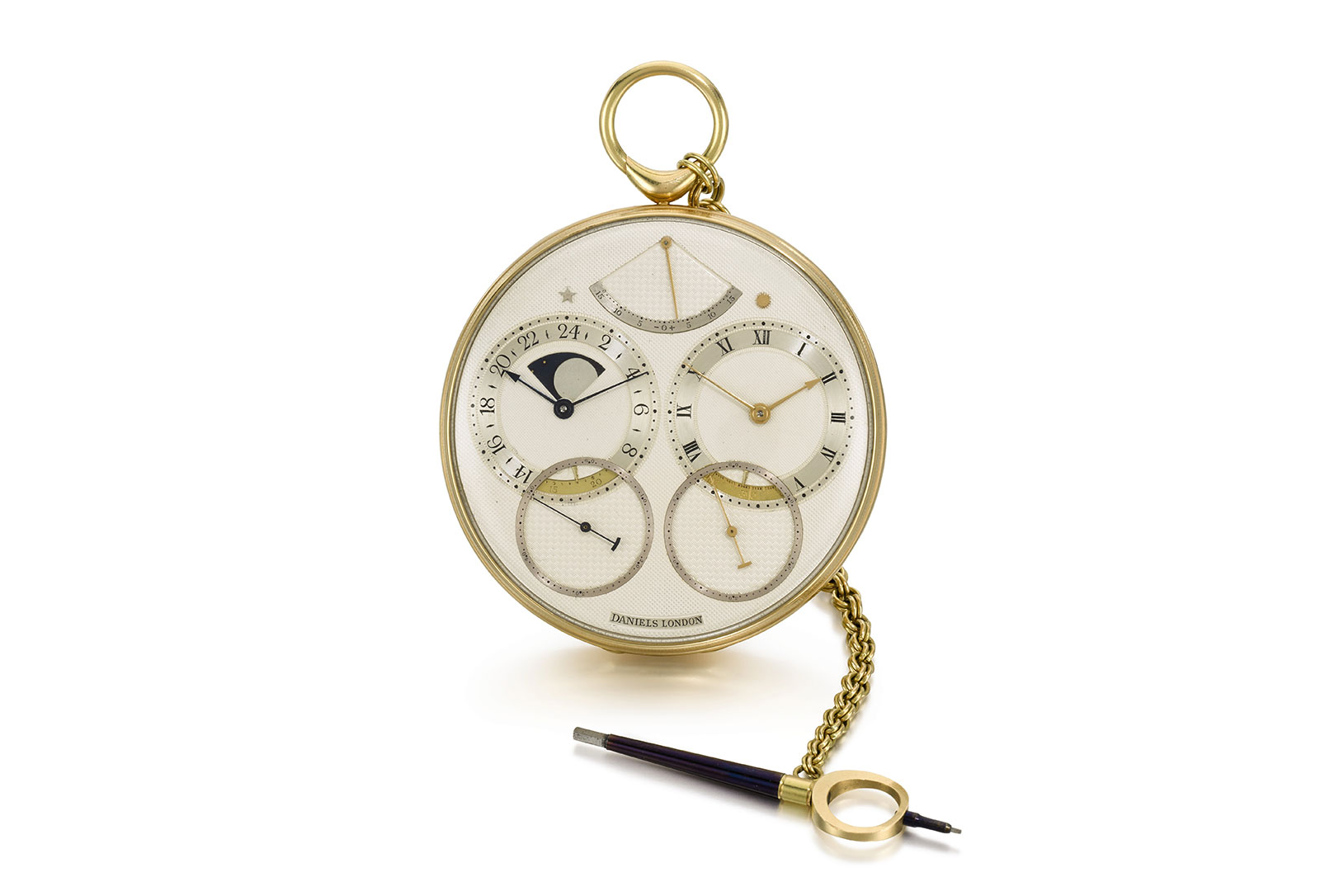 Sotheby’s has just announced the sale of one of the most important watch and clock collections in the world, made up of over 800 timepieces – mostly pocket watches and clocks – with an estimated value of US$15-27m. Although the collection includes many, many spectacular timepieces, the best known is arguably the George Daniels Space Traveller I.

Accumulated over a lifetime by a collector – a European gentleman according to industry sources – the collection has been titled Masterworks of Time and will be sold at five thematic auctions in London, Geneva, New York, and Hong Kong between July 2019 and October 2020.

The size and breadth of the collection also demonstrates the formidable influence of Daryn Schnipper, the New York-based chairman of Sotheby’s watch department.

Though not as high profile as auctioneers like Aurel Bacs of Phillips, Ms Schnipper has spent 39 years at Sotheby’s, where she has helped sell some of the rarest and most valuable timepieces in history, many of which are now returning for Masterworks of Time.

Named after the fact that it displays both mean solar time and sidereal time, this was the original Space Traveller that was finished in 1982, and shortly after sold by London antique watch dealer Bobinet. 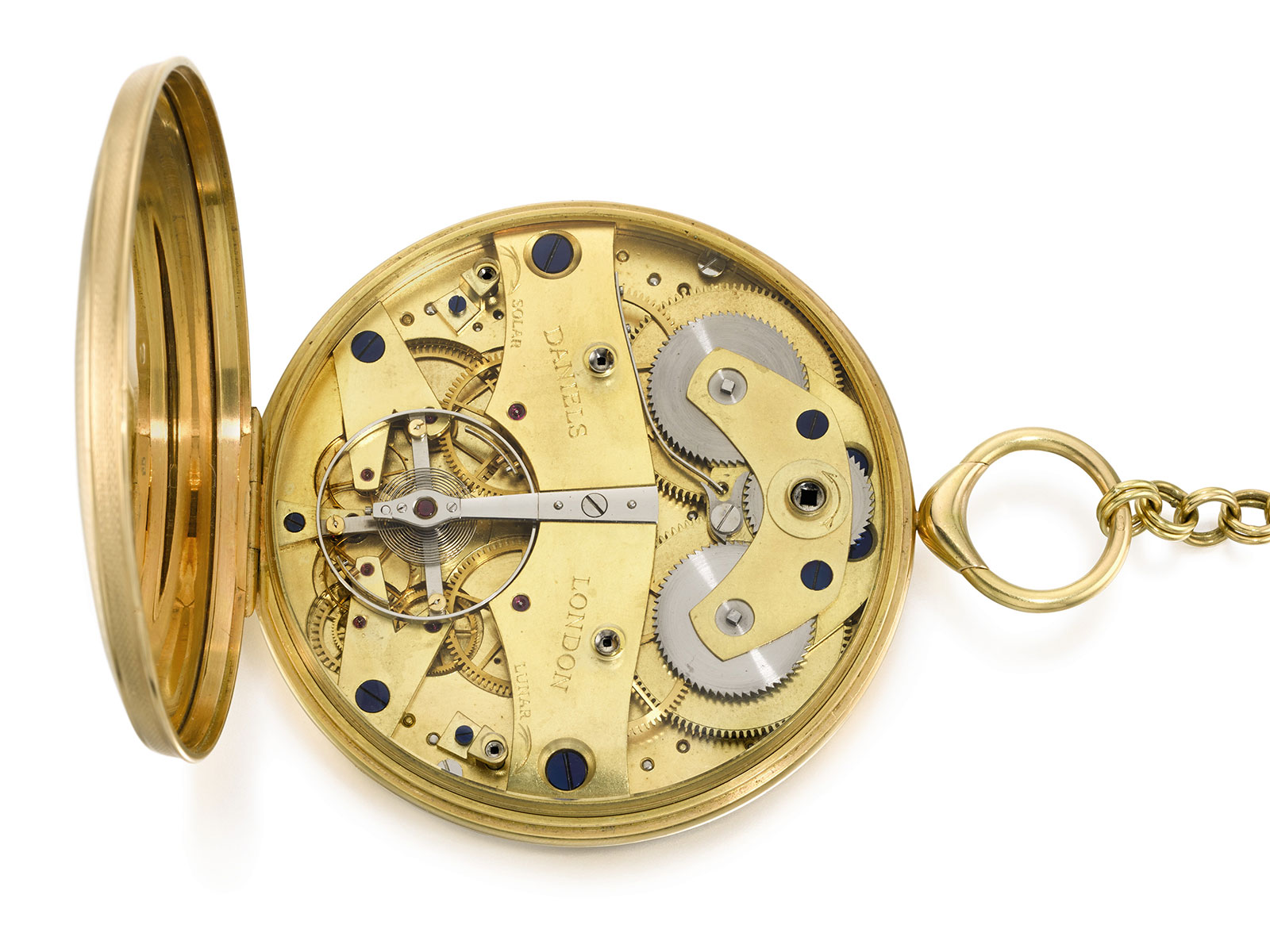 The movement of the Space Traveller I

The buyer of the watch then sold it at auction in 1988 for a record 220,000 Swiss francs, the last time it was publicly offered.

The year he sold the first version, Daniels started on the Space Traveller II, which sold in 2017 for US$4.32m, fees included.

Also in the same auction is an 18th century predecessor of the Space Traveller. Made in 1778 by George Margetts and numbered “1”, this pocket watch has an astrolabe dial showing the constellations, mean solar time, moon phases, and tide levels. This has an estimate of £180,000-220,000. 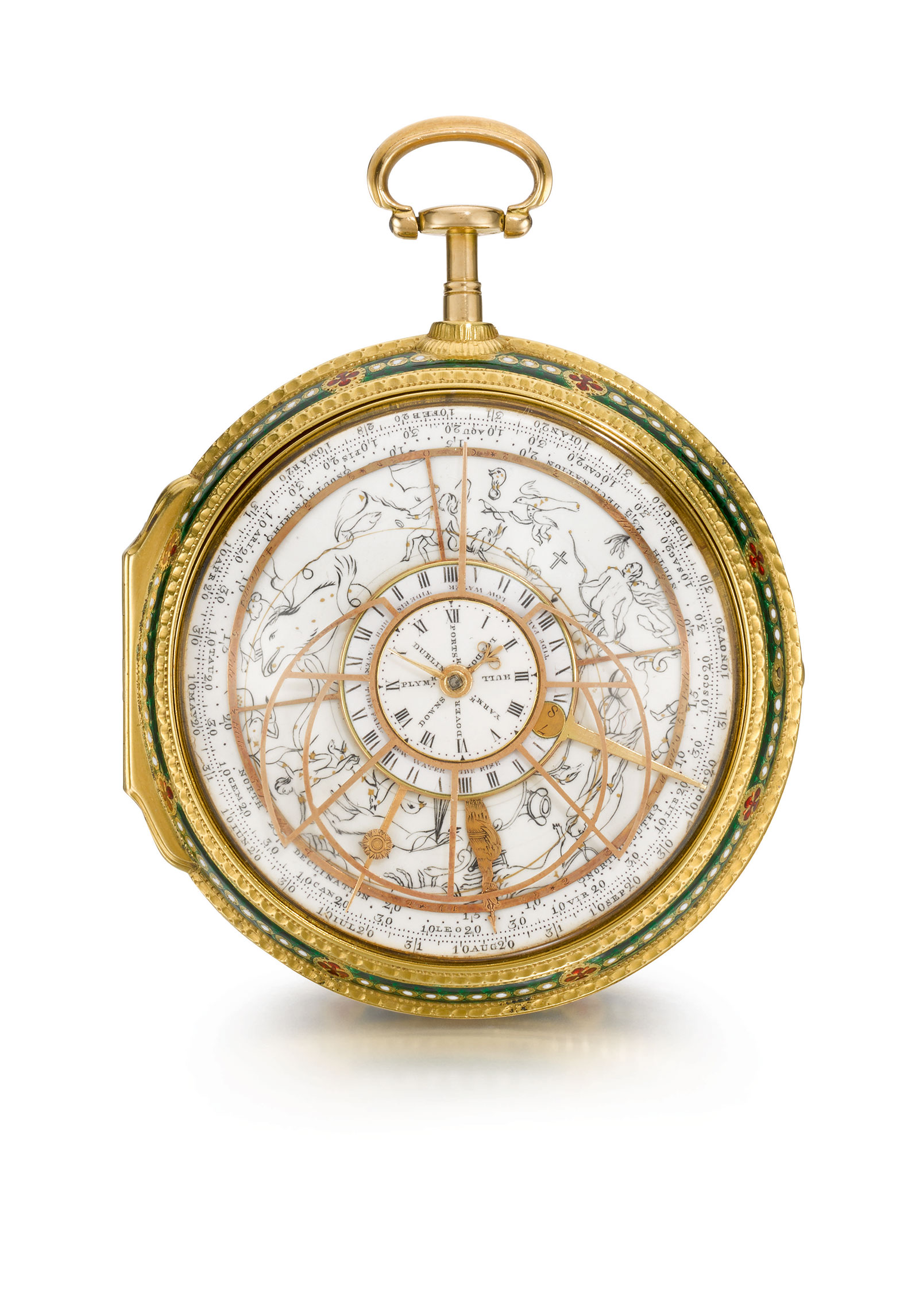 A day later on July 3, the second instalment of the auction will see this magnificent Vacheron Constantin chinoiserie portico clock go under the hammer.

Typical of ultra-luxe clocks of the 1920s – examples by Cartier are probably the best known of the genre – this lavish clock from 1926 is made of rock crystal and onyx, and inlaid with coral and mother of pearl, and most probably made by Parisian jeweller Verger Freres. Its estimate is £250,000-400,000. 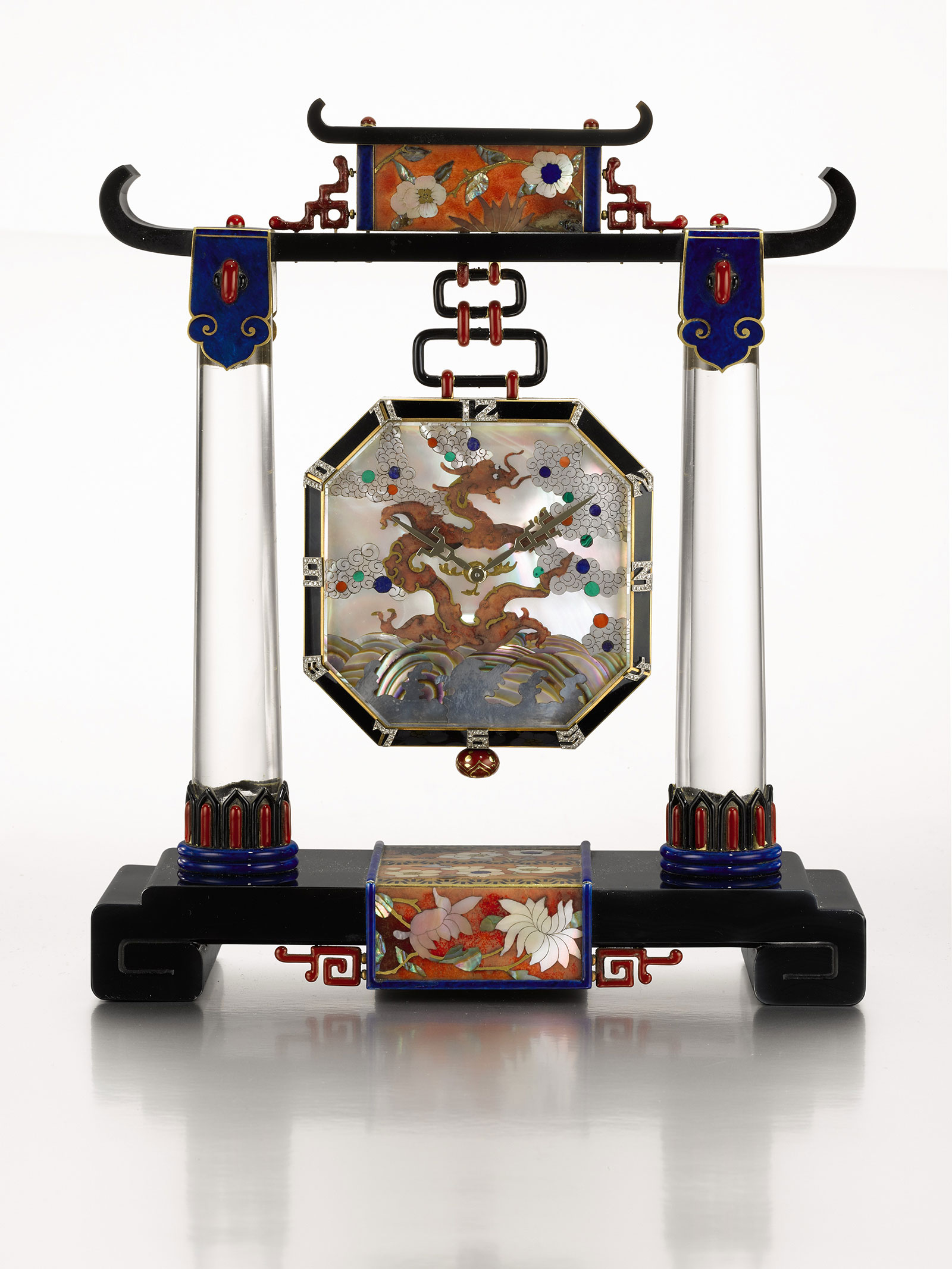 And in November 2019, an uber-watch by A. Lange & Söhne will go under the hammer. Sold almost three decades ago for a record price that still stands for the brand, Lange pocket watch no. 41000 was made for the 1900 Paris Exposition.

It features a movement boasting a one-minute tourbillon with pivoted detent escapement inside a platinum case decorated with a miniature enamel symbolising the dawn of the new century. This is estimated at £700,000-1m. 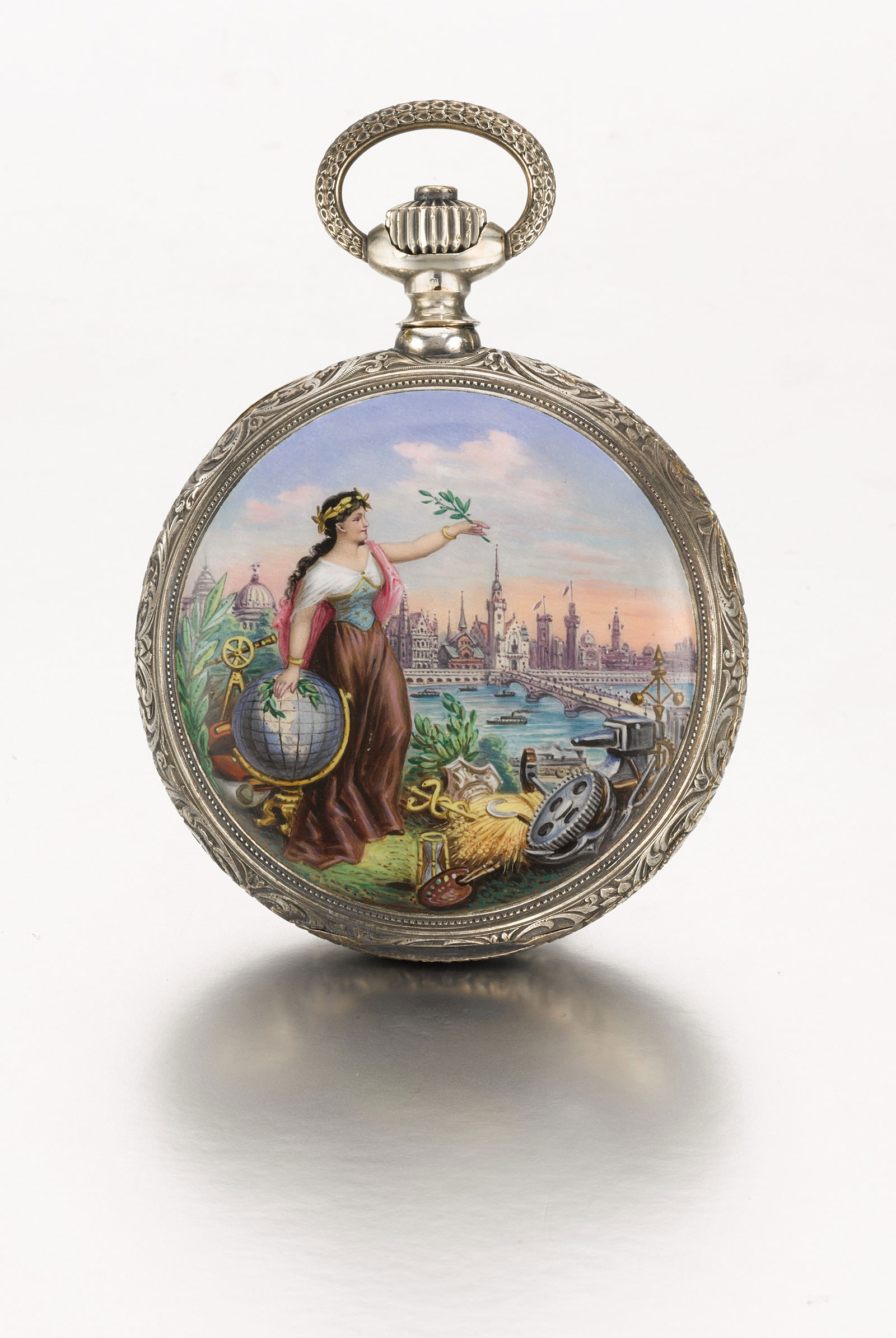 The watches in the collection be sold in five auctions:

Adolf Lange, The Golden Era of Glashütte, Geneva in November 2019

Exports for the Eastern Market, Hong Kong in October 2020

Correct June 6, 2019: The Space Traveller I was sold by watch dealer Bobinet and subsequently at Sotheby’s. It not purchased by Theodore Beyer as stated in an earlier version of this article; Beyer had bought the preceding watch Daniels produced. 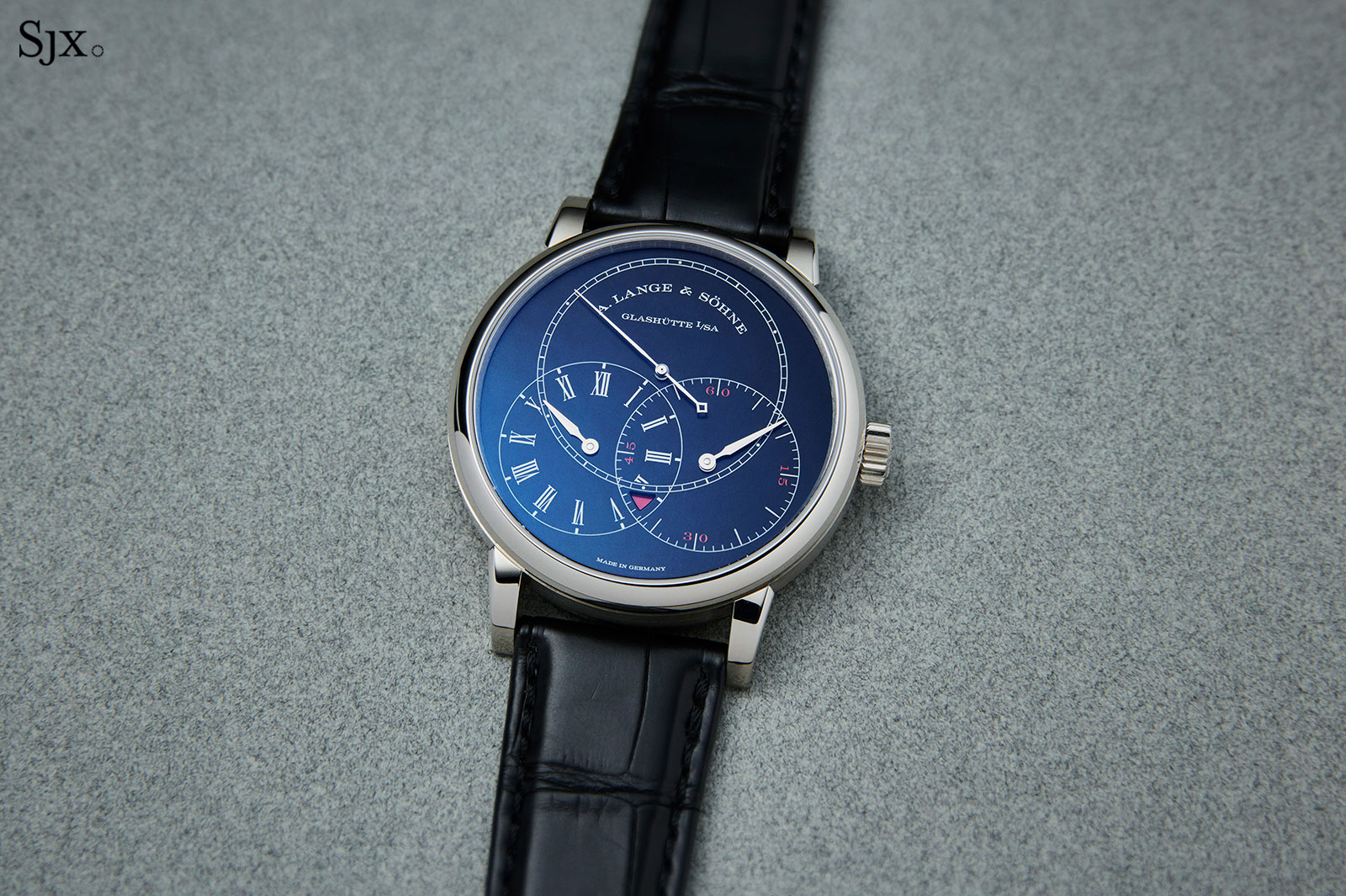 Introduced at SIHH earlier this year, the Richard Lange Jumping Seconds in white gold is the first version of the model that is not a limited edition. It is, in other words, a more accessible, though not more affordable, version of an interesting and smart watch.

Fundamentally it is exactly the same as watch as the inaugural platinum and subsequent rose gold models. It’s relatively compact and slim – measuring 39.9mm by 10.6mm – so it sits well on the wrist. In fact, it feels like a dress watch, despite being substantially complicated, both technically and visually. 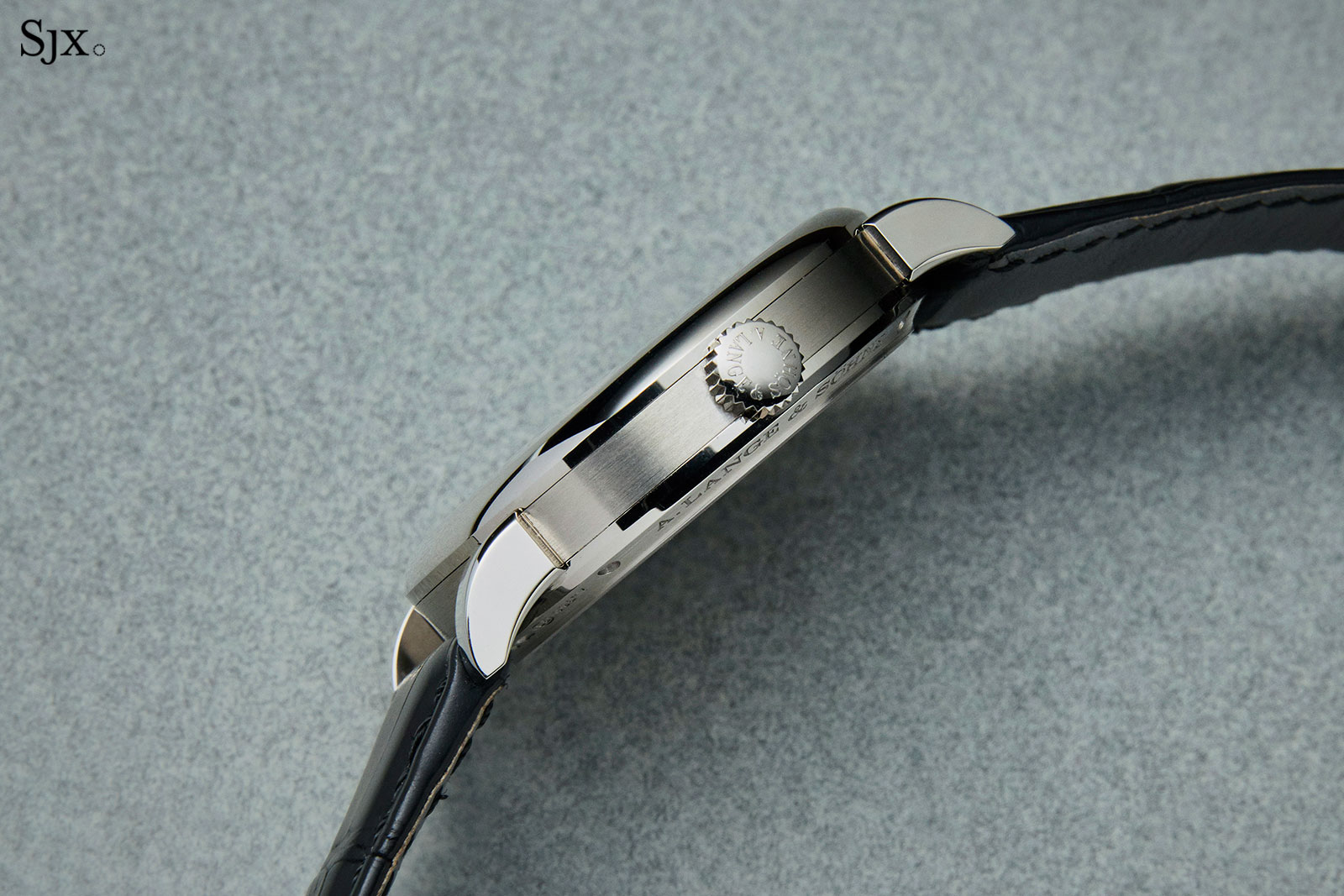 The white gold Jumping Seconds is the most attractive version of the watch yet. More specifically, the black dial with contrasting markings is most suited to the regulator-style dial, historically found on precision or scientific timekeepers, with the various time displays separated for legibility.

John Harrison’s very first marine chronometer, for instance, had a regulator-style dial. And the Lange regulator dial with its three sub-dials arranged in a pyramid was inspired by an 18th century pocket watch by Glashütte watchmaker Johann Heinrich Seyffert, who also made the watch that explorer Alexander von Humboldt took along for his expeditions.

In fact, watch factories in times gone by often had a precision regulator clock by which to set the watches and clocks being produced.

And to the same end, regulators often had deadbeat or jumping seconds, to cater to precise synchronisation of the seconds.

So the black dial with stark white markings – and a hint of red – is eminently functional, with slight military undertones, which works very well for the type of timekeeper it is. 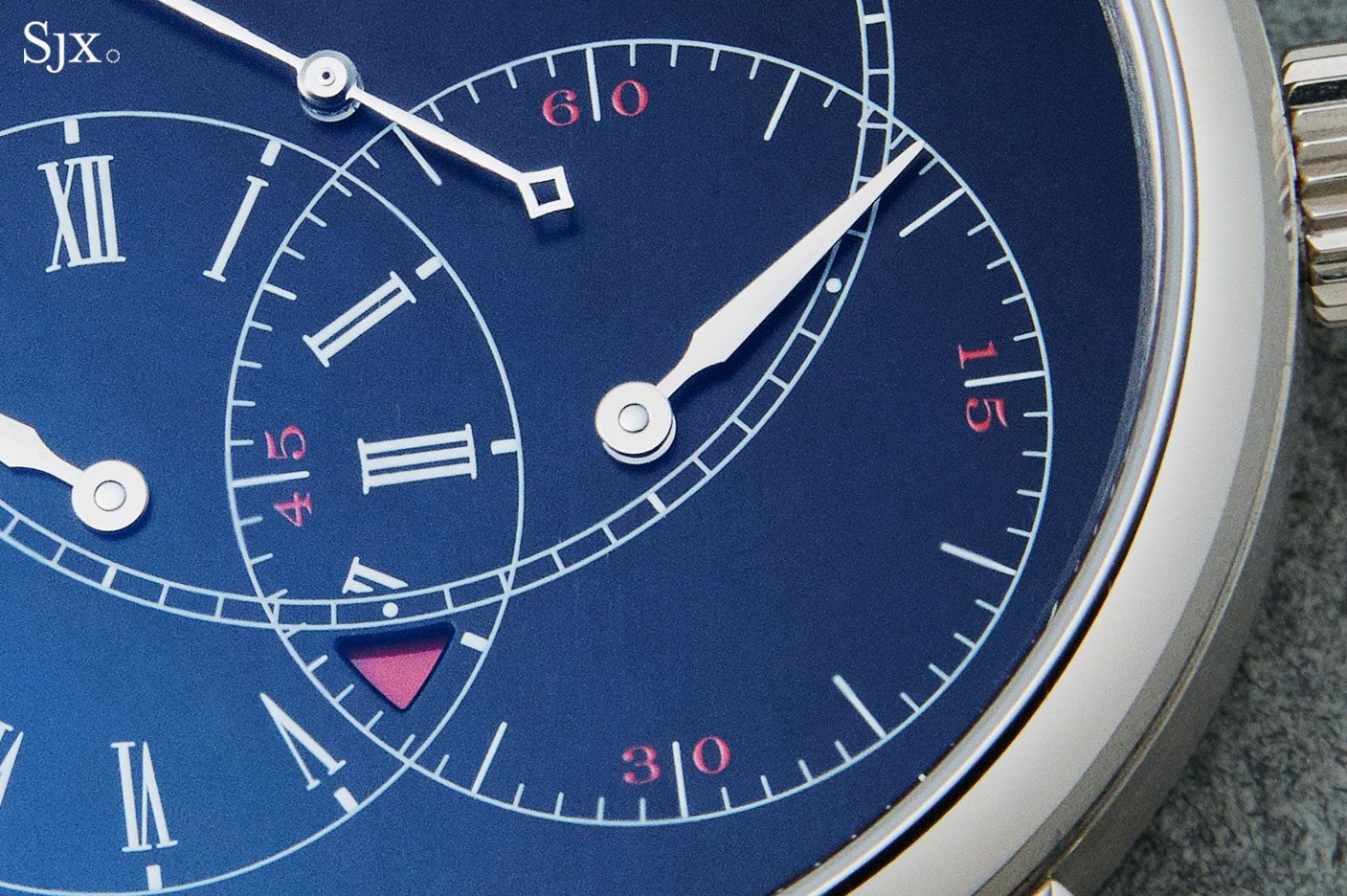 But being the exactly same watch as the other versions means this Jumping Seconds has the same drawback – the regulator-style display takes a while to get used to.

On the large face of a clock, or even a pocket watch, a regulator dial is quite legible, but on a wristwatch it can be confusing. That’s especially so when all the hands are pointing towards the centre of the dial – at 2:55:30pm for instance – requiring the wearer to take a second to untangle all the hands. 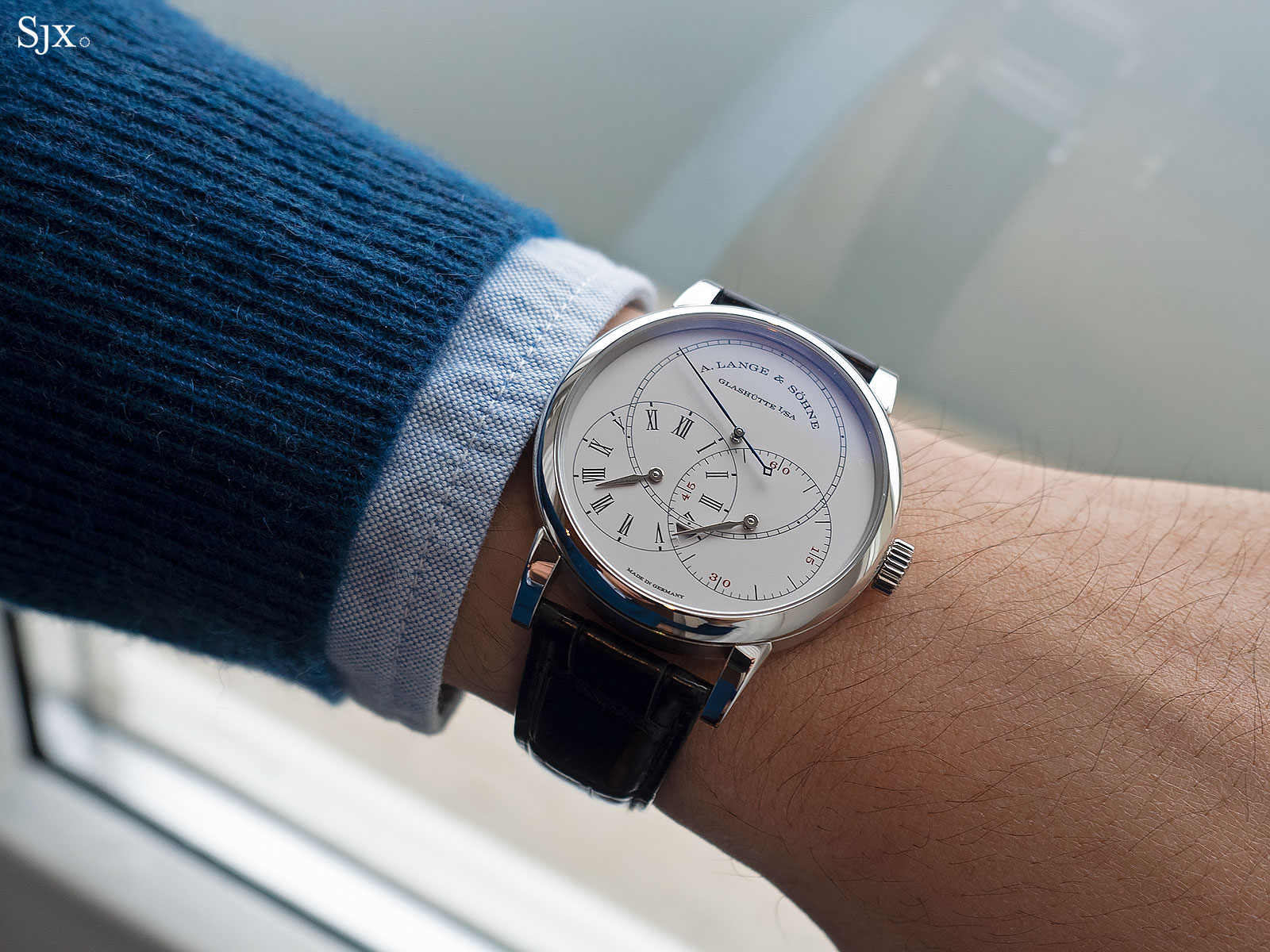 But being the same also means it has the same L094.1 movement, which is a great one. It is one of the rare movements with several complications that are all sensible; all the add-ons in the movement are geared towards better timekeeping (and time-setting). 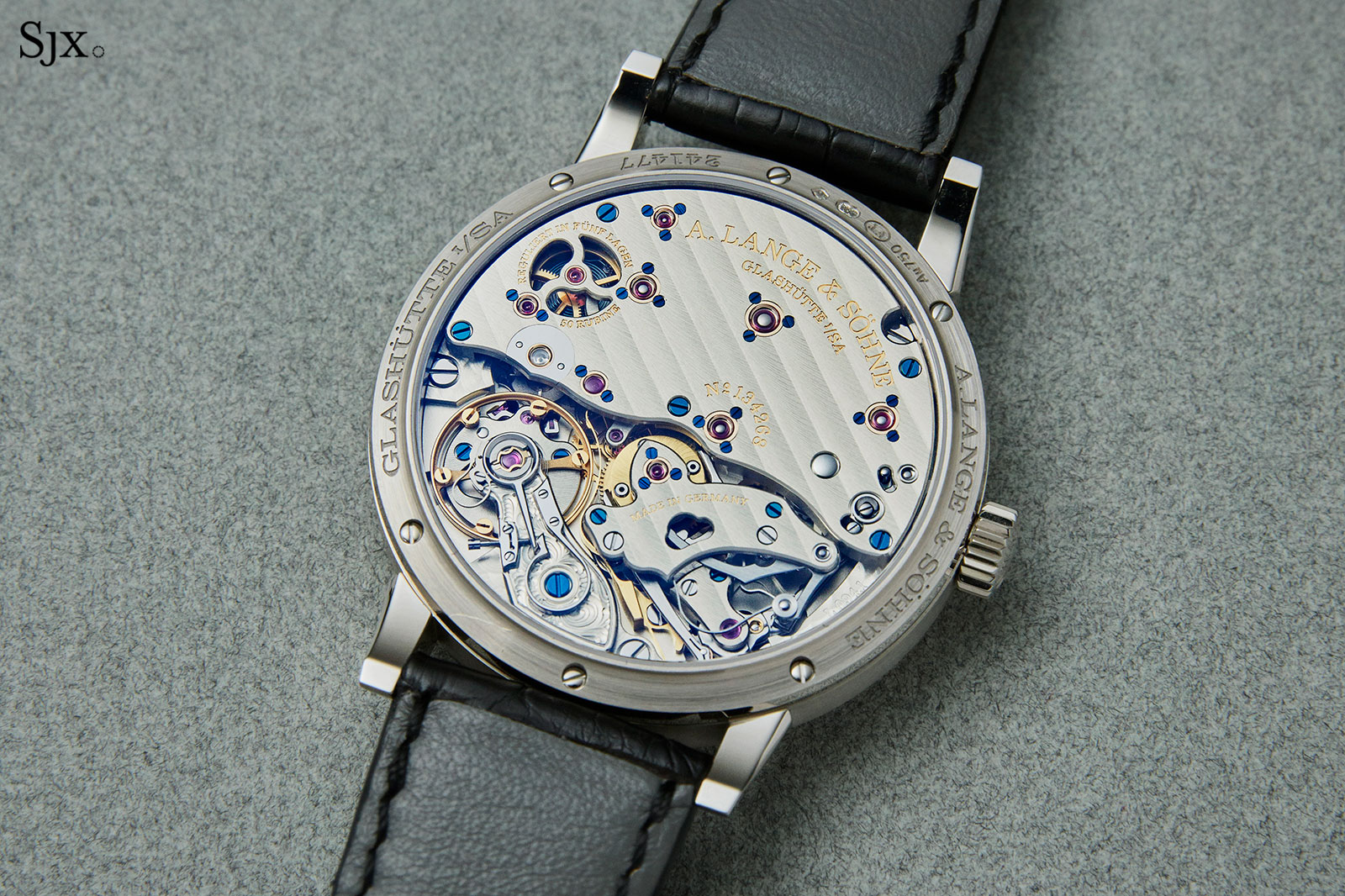 The movement has a one-second remontoir, or constant force spring, that ensures consistent energy is delivered to the balance wheel. That in turn ensures stable timekeeping through the ups and downs of the power reserve. And just to be sure there’s a power reserve indicator on the dial to ensure the mainspring never really runs down. 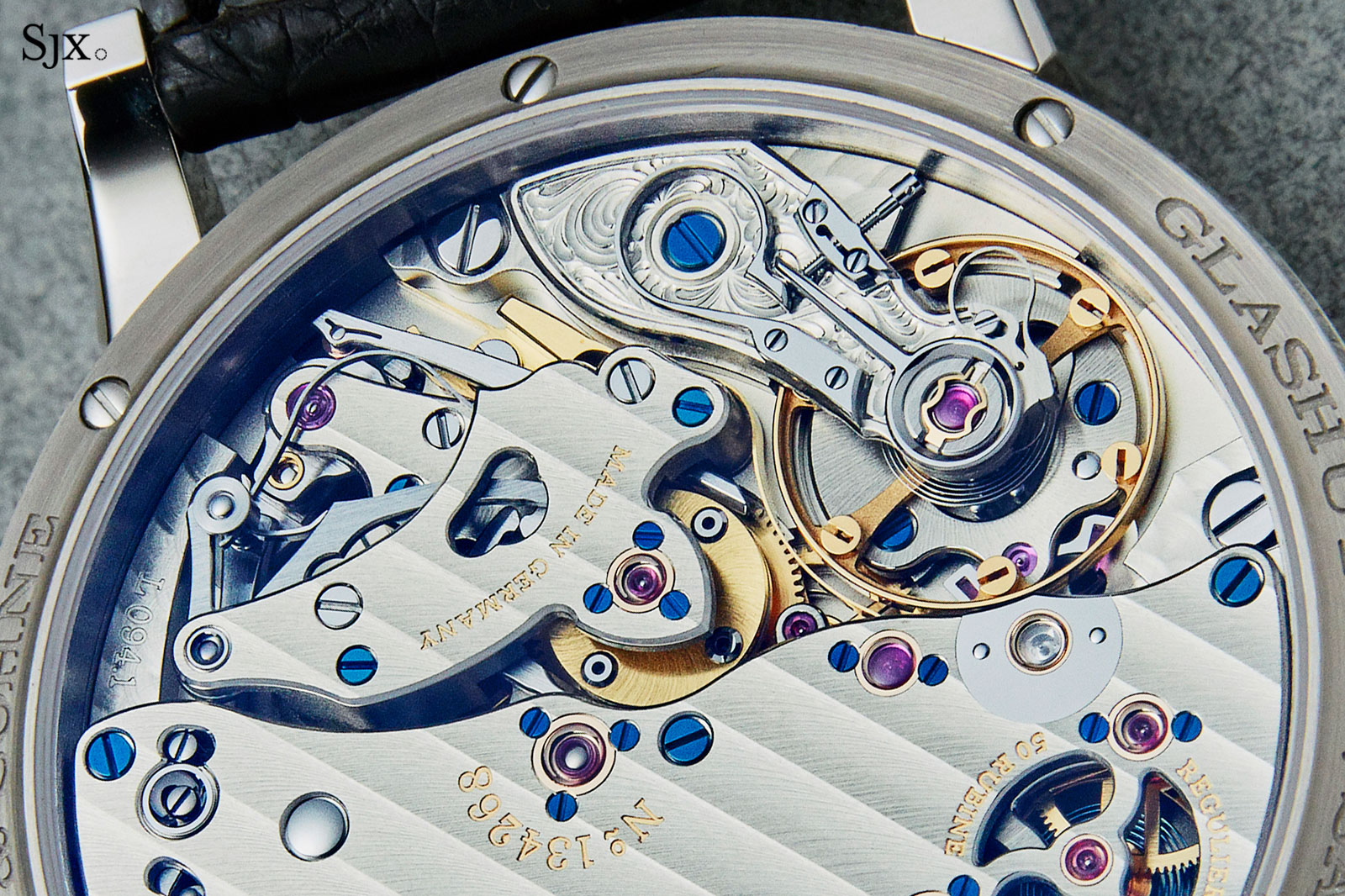 And it also has a deadbeat seconds that in turn moves in discreet, one-second steps, which looks more precise than a conventional sweep seconds. The seconds is driven by a separate wheel train that’s connected to the barrel, meaning it does not sap the energy that drives the escapement. 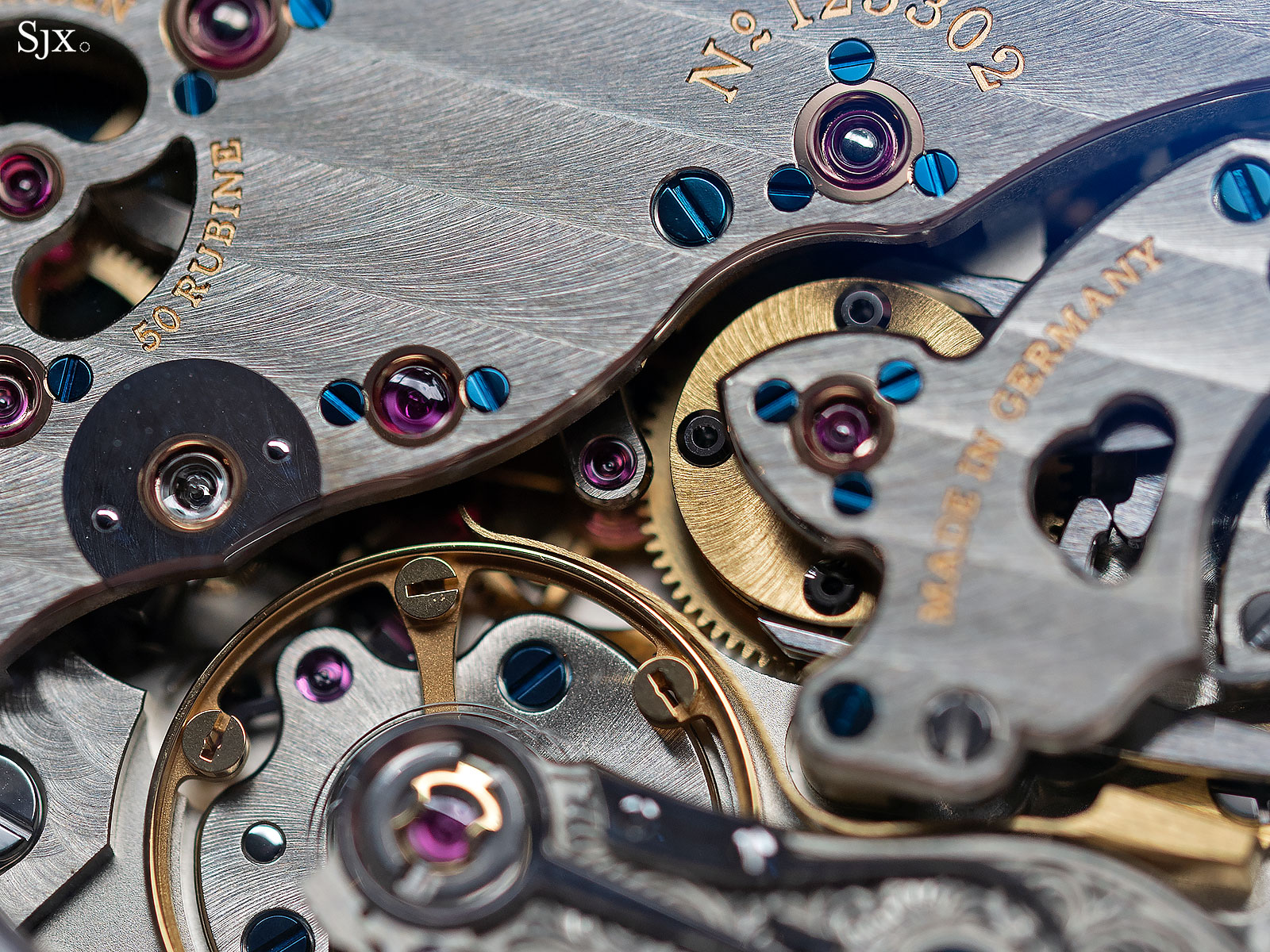 The deadbeat seconds is further enhanced by the hacking, zero-reset seconds: pulling the crown to set the time stops the seconds hand and sends it back to “12”. Together the various complications make a lot of sense in such a watch.

The movement is also good looking, having a two-third plate instead of the usual three-quarters, with the vacated space taken up by the hacking seconds mechanism. As with most mechanisms devised by Lange, the stop-seconds works could probably be simpler and smaller, but they are not, which creates more to see. 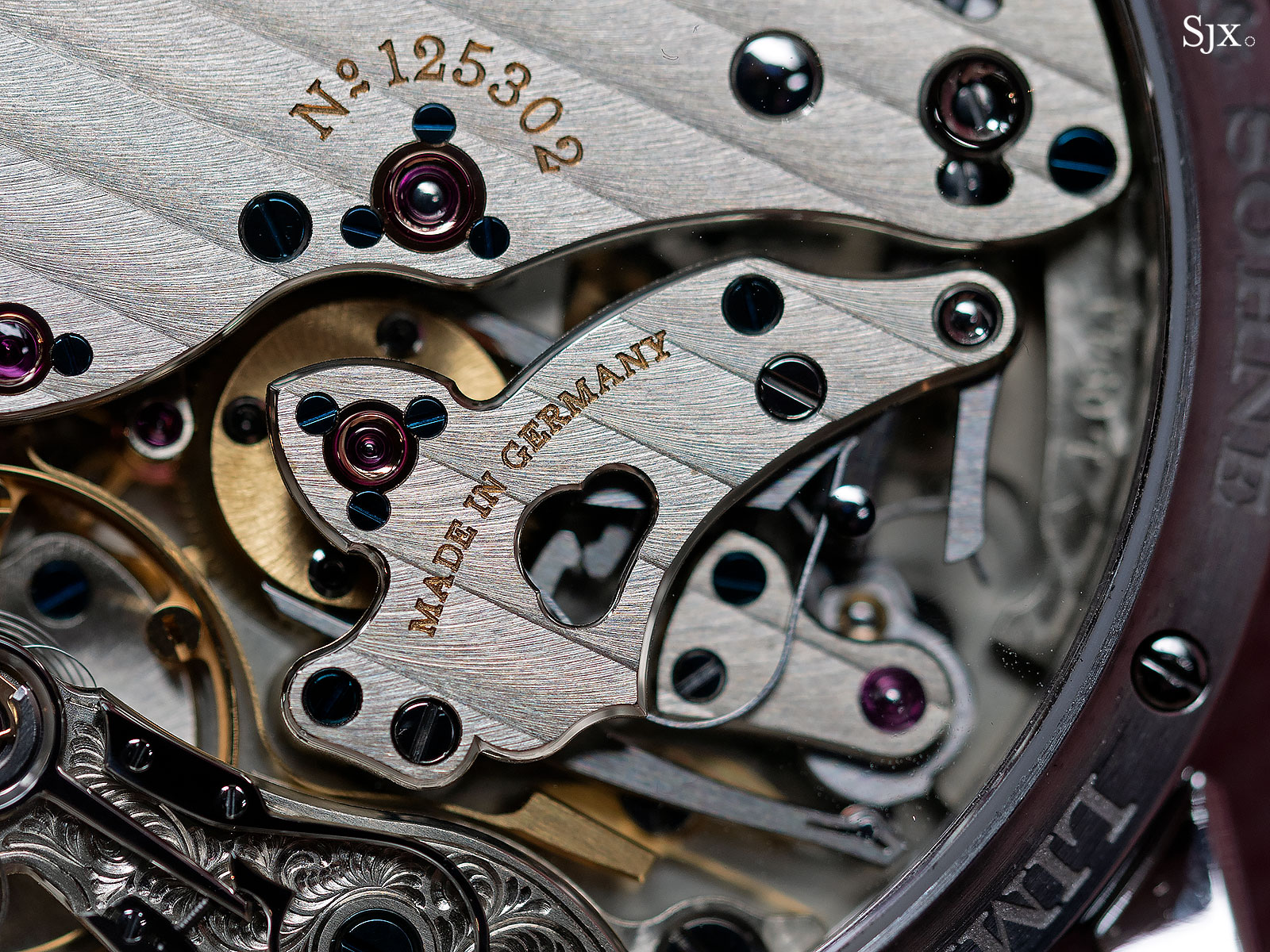 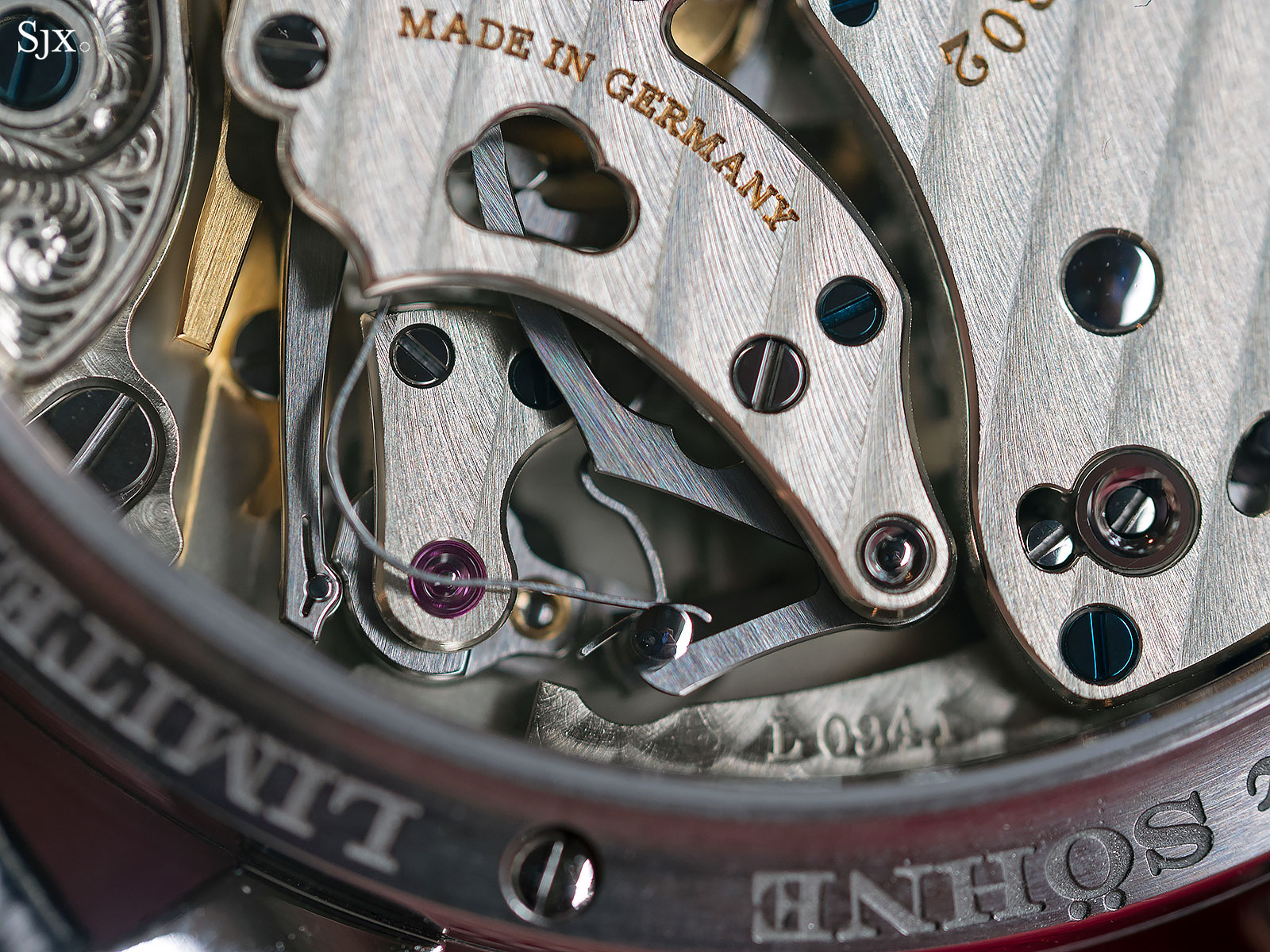 Attention to detail has obviously been paid to the hacking seconds bridge, which boasts one acute inward angle, and another acute outward angle, along its bevelled edge, plus three softer outward angles. These are decorative flourishes not often found on Lange movements at this price point. 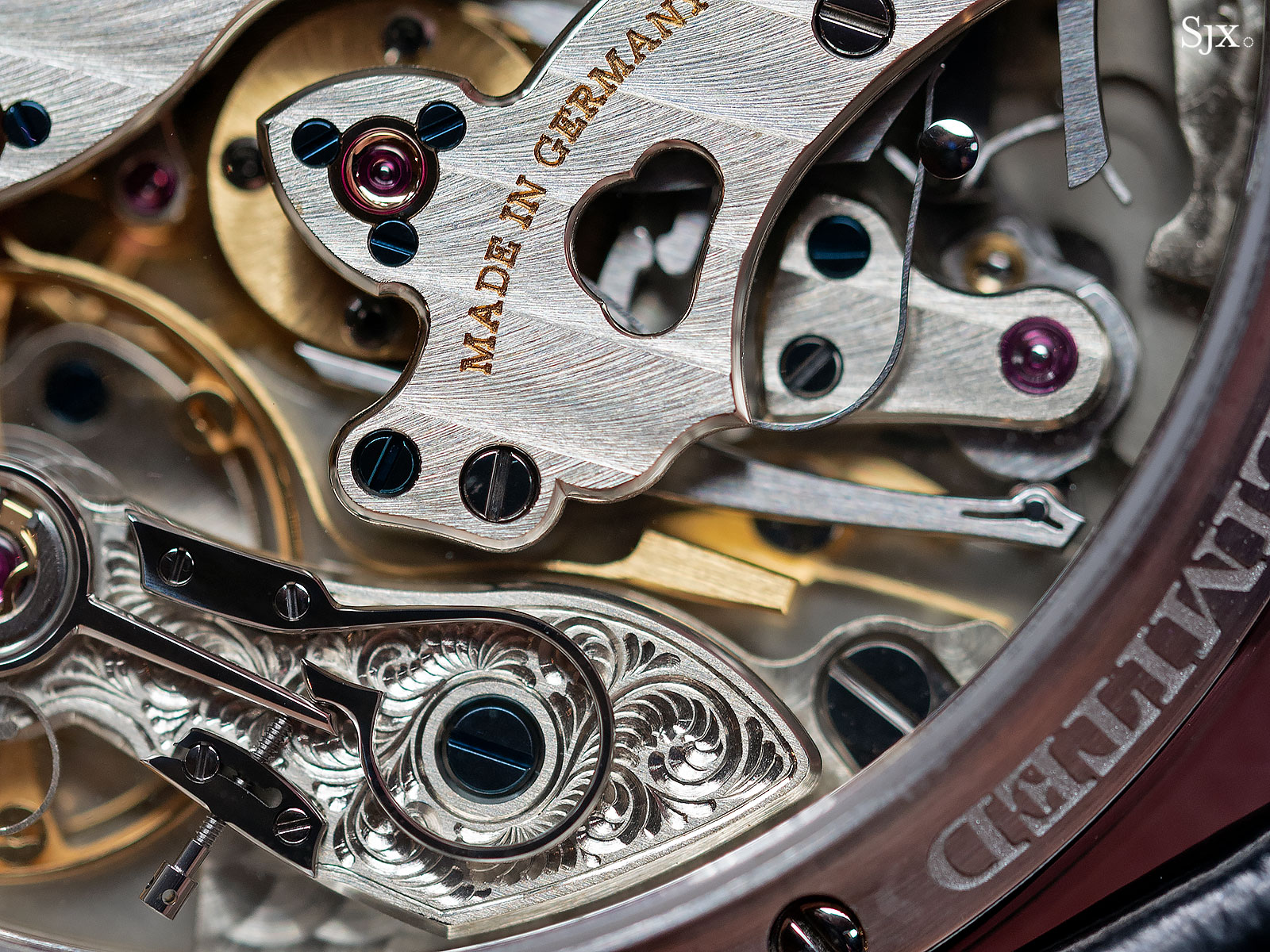 The white gold model is the best looking of the the Richard Lange Jumping Seconds, itself a smartly conceived watch.

And it is marginally cheaper, by US$3500 to be exact, than the limited edition pink gold version so from that perspective it’s a well priced compared to its siblings. 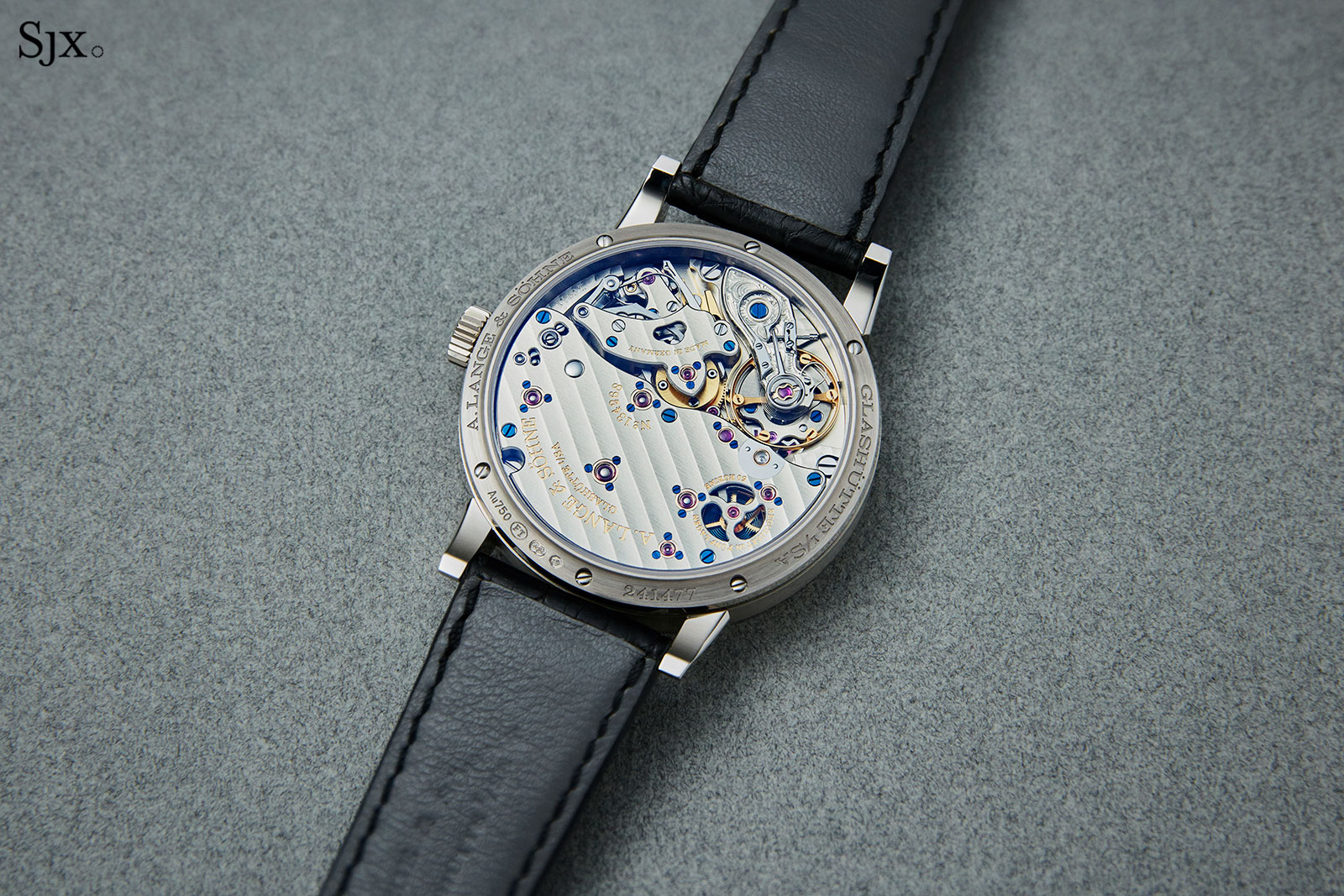 But the rose gold and platinum versions have the appeal of being limited editions of just 100 examples each. Although the white gold version surely won’t be produced in large numbers, the promise of a limited edition is always irrationally alluring.