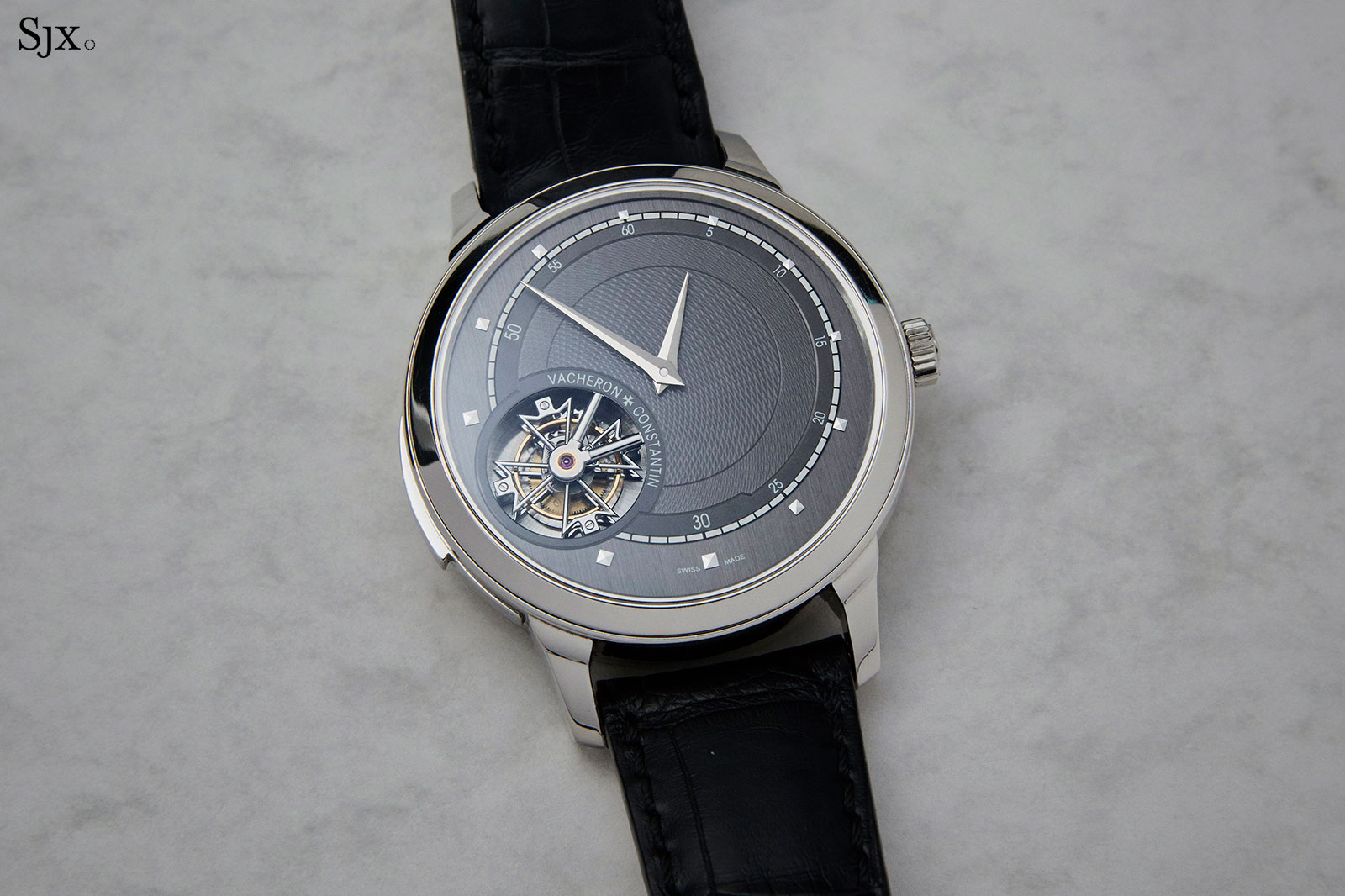 Les Cabinotiers is the department of Vacheron Constantin that builds custom and bespoke watches. They are sometimes produced according to client specifications, but more recently the workshop instead builds one-off watches that are then offered to clients. Its creations can be relatively simple, for instance a Historiques 1921 in steel, to wildly complicated and over the top.

Grand complications usually look grandly complicated, but as it turns out, not necessarily. An anonymous client tapped on Les Cabinotiers to create this remarkable grand complication in 2011, and the watch is only being shown in public because it has been consigned for sale at Christie’s upcoming Dubai watch auction. Named the Les Cabinotiers ref. 30016/000P-9739, the watch is double faced, with the time and a one-minute tourbillon on the front, while the reverse reveals the perpetual calendar with zodiac indicator, and the day and night display. And the slide on the left side of the case gives away the fact that it’s also a minute repeater, striking on two gongs.

With a 44mm platinum case, the watch is large, hefty and impressive, but also elegantly detailed, with slender lugs inspired by the Maltese cross and a thin, sloping bezel. The detailing on the lugs is possible because they are actually separate pieces that are soldered into the case. Inside the hand-wound cal. 1756 that has a 58 hour power reserve. The calibre number would indicate it is derived from the cal. 1755, the extra-thin minute repeating movement Vacheron Constantin unveiled in 1992.

Unlike other calibres that are widely used in Les Cabinotiers watches, the cal. 1756 remains a rarely used movement, at least so far. I’ve only seen two other watches with the same calibre, and neither is as good looking as this one (one of them has an open-worked dial and you can see it on Hodinkee).

The tourbillon cage is the standard Maltese cross form used by Vacheron Constantin, while the bridge is black polished and rounded, as is de rigueur for such watch. While the focal point of the dial is the tourbillon, the rest of the front is surprisingly intricate up close. The dial is made of solid gold, and finished with five surface treatments, including two variations of guilloché grain d’orge, or barleycorn engine-turning.

The centre-most portion is engraved with a larger circular barleycorn motif, which is in turn ringed by a finer, narrow version of the same pattern. It’s followed by the railway minute track in white, and then the outermost portion of the dial, which is vertically brushed. But then step back and the whole of the dial reveals itself: the twin guilloche surfaces radiate outwards from the tourbillon, while the minute track is pleasingly off-centre. Each of the hour markers – small white gold pyramids – follow the arc of the eccentric dial.

And the Vacheron Constantin logo is large but strangely discreet, blending into the frame of the tourbillon aperture. The back of the watch is decidedly more complicated. It shows the perpetual calendar indications in the centre, along with the day and night display. Surrounding the calendar is a solid white gold plate hand-engraved with the signs of the zodiac. A tiny sun on the edge of the back points to the current zodiac sign.

The calendar indications are rendered in sans serif font, which feels a bit simplistic relative to the rest of the watch. But unimaginative fonts are par for the course in watchmaking so it’s not much out of the ordinary. With everything that is inside, the watch is inevitable large. The case is 44mm in diameter, and about 14 high. It is both big and thick, but the styling gives it a more elegant presence than the average grand complication. The Vacheron Constantin Les Cabinotiers ref. 30016-00P (with movement number 5’193’036 and case number 207’511) is complete with paperwork, accessories and boxes. It’s obviously been worn, showing minor scuffs and scratches, but not significantly, and is in fine condition.

The watch is lot 119 in Christie’s Important Watches auction that takes place in Dubai on March 22, 2019. It has an estimate of US$350,000–US$650,000, or AED1.3m–AED2.4m, a significant reduction on its original price. The full catalogue can be found on Christies.com, with additional information available from Dubai head of department Remy Julia.