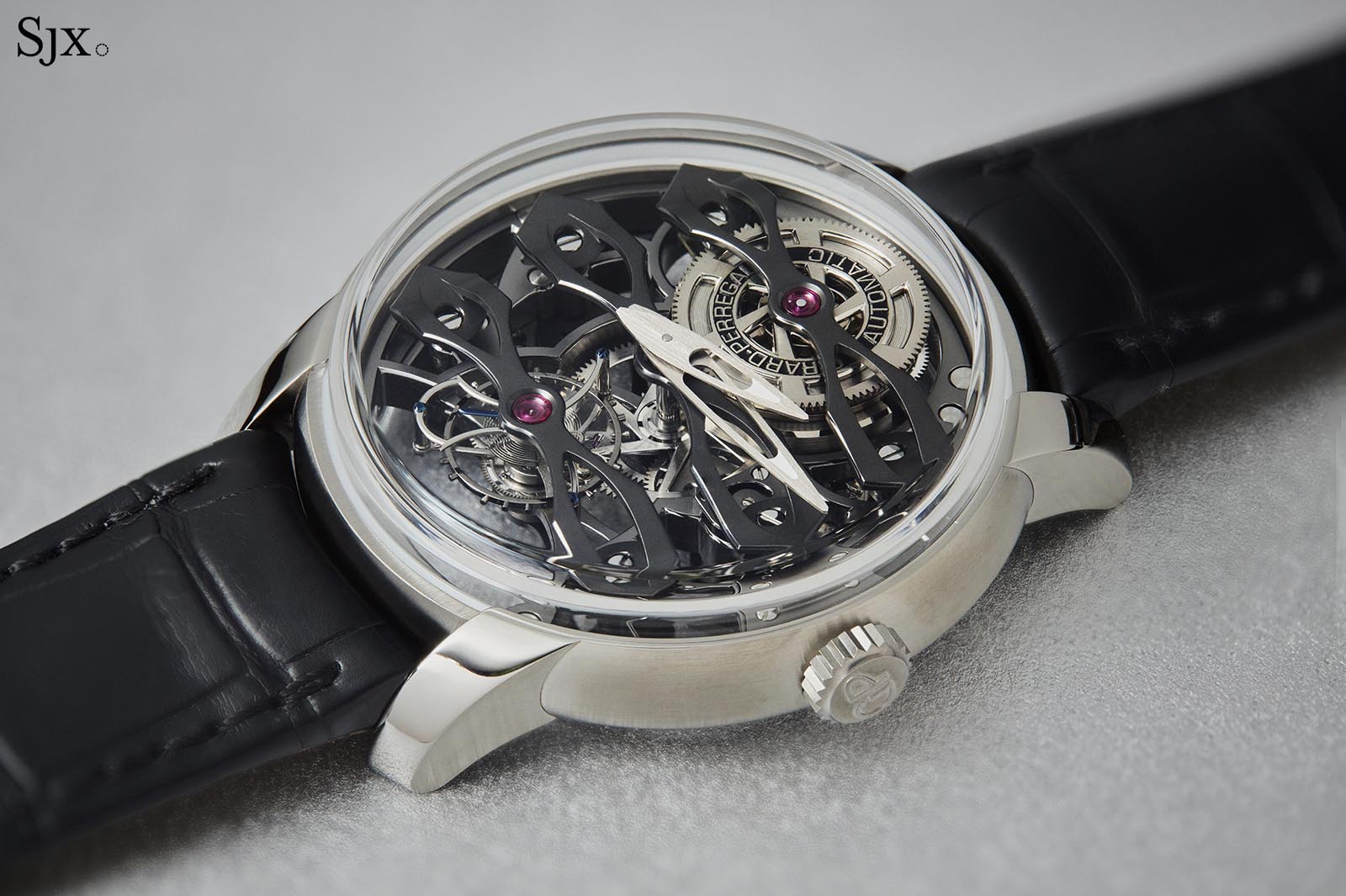 Girard-Perregaux’s Tourbillon with Three Gold Bridges is possibly one of the most iconic tourbillons ever created. Its symmetrical, linear movement layout is unique, as is its tourbillon cage. In fact, in horological scholar Reinhard Meis’ definitive book on the subject, Das Tourbillon, the Perregaux tourbillon cage is considered unique in itself, sitting alongside the works of Guinand, Lange, Pellaton and Golay.

Now, over 150 years after it was first conceived by Constant Girard himself, the Tourbillon with Three Gold Bridges has been reimagined. Four years ago, Girard-Perregaux unveiled the Neo Tourbillon, replacing the flat, arrow-shaped gold bridges with arched supports made of titanium.

And at SIHH earlier this year, the movement was skeletonised, giving it a stylised, architectural style. Though it’s the same size as the earlier versions of the watch, the Neo Tourbillon With Three Bridges Skeleton looks lighter, which gives rise to the sensation it is physical lighter, though it is probably not, at least by any tangible degree. As is typical for a Tourbillon with Three Bridges, the cal. cal. 9400-0011 is laid out in a linear fashion, with the barrel, gear train and tourbillon arranged vertically from 12 to six o’clock, with the most important bits held in place by three black-coated titanium bridges. Aesthetically, the symmetrical architecture of the Tourbillon with Three Bridges movement lends itself well to skeletonsiation. The result of open-working is a visual intricacy that is immediately impressive, drawing one’s focus to the eponymous bridges perhaps more than ever. It’s helped in no small part by the contrast of the black coated bridges against the rhodium and ruthenium treated components. Despite the “Three Bridges” label, the Neo Tourbillon skeleton boasts five bridges, with two more on the back of the movement for the bottom pivot of the tourbillon and centre wheel, essentially taking the place of a solid base plate. Like the three bridges on the front, the two bridges on the back are also arched and black-coated. Above the middle bridge sits the skeletonised barrel ratchet winding wheel with lyre-shaped spokes that are taken from the top half of the trademark Girard-Perregaux tourbillon carriage. And the winding wheel that’s just beside the ratchet wheel has been open-worked to reveal the grande sonnerie style winding click below. Although the movement has an obvious modern aesthetic, its decoration is still finely executed, though it has to be said the dark movement finish hides a lot of the tinier details.

Every component is finished as it should be, right down to the details like chamfered slots on screw heads and bevelled edges on the spokes of wheels, even the tips of the lyre on the barrel ratchet wheel. The movement finishing is neat, consistent, and no doubt done by hand, but it is not as artisanal – and inconsistent – as the earliest Tourbillon with Three Gold Bridges that had a finishing almost comparable to the work of an independent watchmaker.

Having a 60-hour power reserve on a single barrel, the cal. 9400-0011 movement is self-winding in a compact and clever manner. Using the same mechanism Girard-Perregaux debuted with its automatic tourbillon over a decade ago, it employs a white gold micro-rotor positioned co-axial with the barrel, basically sitting right over the mainspring. The distinctive Perregaux tourbillon carriage is made up of 80 parts, and like the arched bridges is made most of titanium. So it clocks in at a flyweight 0.25 grams, despite being a largish 14.44mm in diameter, boosting the efficiency of the movement since less energy is required to turn the cage. Like all traditional tourbillons, it a full rotation every 60 seconds, and also serves as small seconds thanks to a blued steel pointer in the cage. The Neo Bridge skeleton is also fairly legible, thanks to the brushed white gold hands that stand out against the dark finish of the movement.

All of the details on the front are exhibited under the expansive, convex sapphire crystal that sits on the case band, which has no bezel. A feature found on the original Neo Tourbillon, the domed crystal gives the watch a distinct airiness despite its size. 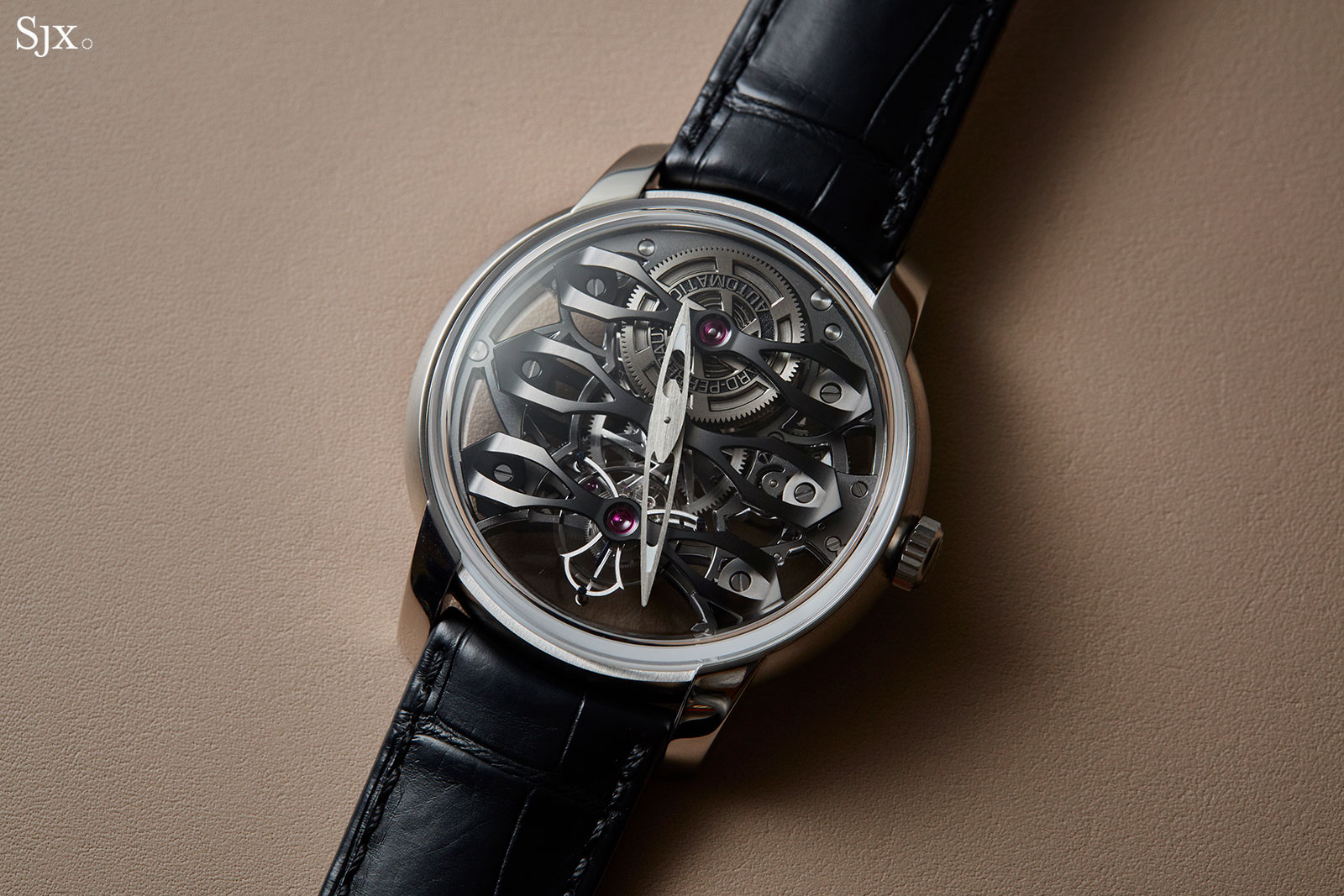 Like the original, the skeleton version has a titanium case that’s 45mm in diameter. Though large, wearability is helped by the short lugs as well as lightness thanks to the case metal. However, Neo Tourbillon skeleton is an imperceptible 1.4mm thicker, standing 15.85mm high, because of the reworked cal. 9400-0011 inside. Not only has the movement been open-worked, the bridges on the back have been arched, just like those on the front, raising the height of the calibre.

A domed, “box-type” sapphire crystal has been installed on the back to accommodate the new calibre. On the wrist the watch feels identical, as the height of the caseband remains the same. 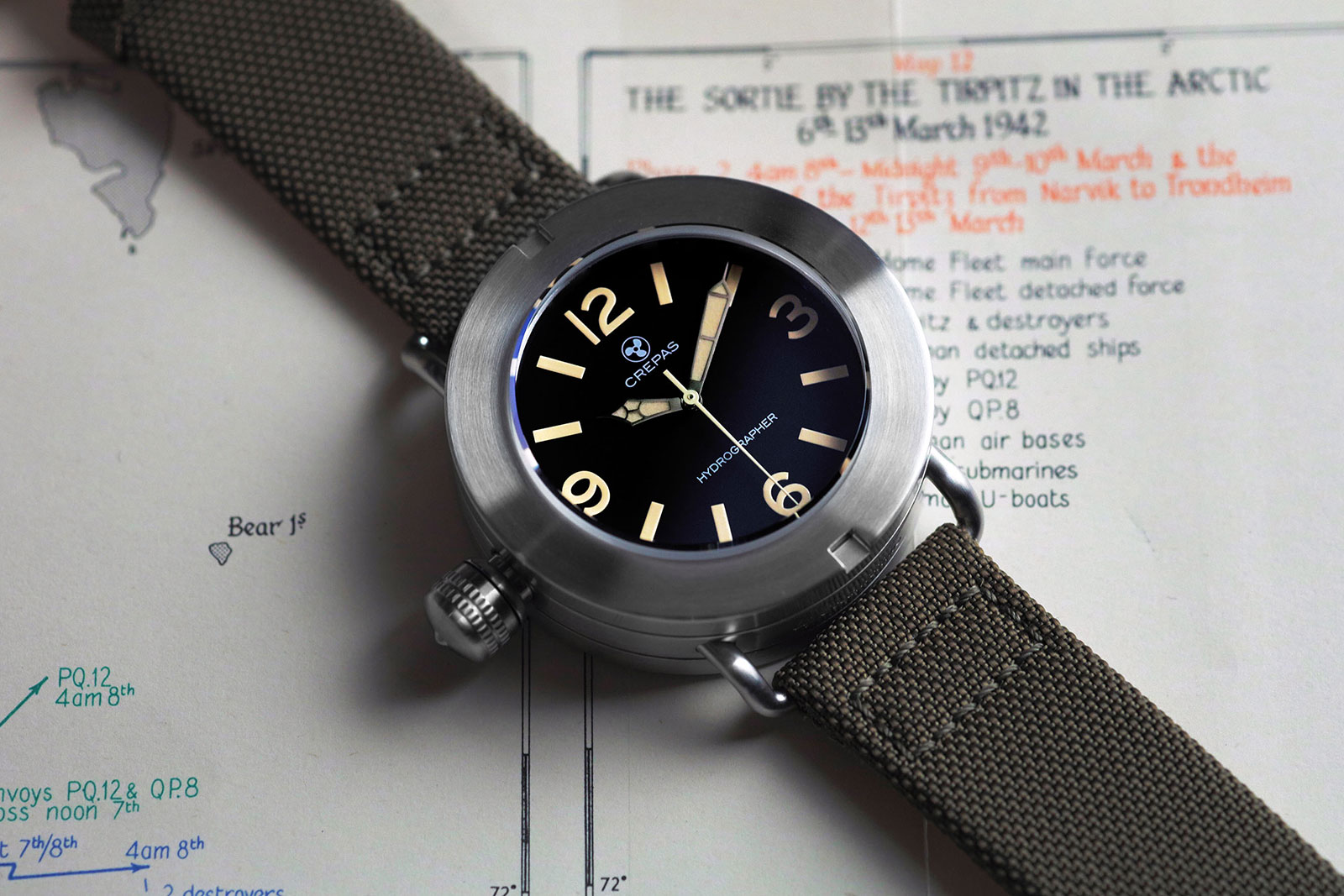 OceanicTime, a blog specialising in dive watches and Spanish microbrand Crepas have come together to reproduce one of the most unusual and interesting military issue dive watches – the gargantuan Hydrographic Survey watch produced by Longines for the British Royal Navy in the 1940s.

With a 51mm case made of sterling silver – complete with a canteen-style crown cover attached with a chain – the Hydrographic Survey watch was made for the commando frogmen of the Royal Navy, essentially the British equivalent of Italy’s Decima Flottiglia MAS, the unit best known for wearing Panerai watches. Only a handful are known to exist today, explaining why they are almost never seen. Made by Crepas to mark the 10th anniversary of OceanicTime, the Hydrographer 1942m is a more wearable Hydrographic Survey watch. Rated to 1942m, the case is 45mm and 15mm high. It’s made of stainless steel, and available in either a brushed, sandblasted or mirror-polished finish. Another option is the crown, which can be on the right or left of the case. The case is fitted with a unidirectional rotating bezel that has two notches on opposite edges, just like the original, while the crown is oversized and functional, a nod to the original canteen crown. And the sapphire crystal is a thick sapphire 5.5mm high, and sits above the bezel; the case height of 15mm does not include the crystal. Unusually, the helium escape valve is in the centre of the screw-down case back that’s been engraved with the British military “Broad arrow” symbol as well as “HS”, just like the original. The dial is matte black and based on the original, but with wider hour markers and slightly redesigned hands. The first 100 Hydrographer 1942m watches are priced at €699, and the price will rise for €850 for subsequent watches. Prices do not include taxes.

The Hydrographer 1942m is available direct from Crepas.