Having just announced its six-month results to the end of September, Richemont’s shares fell 6% as the numbers indicated a sharp slowdown in sales in September. Because Richemont had already announced a 10% rise in sales for the five months before, the mere 8% rise for the full six month period (at constant exchange rates) indicates something went wrong in September.

Geographically the numbers were all positive, with the Americas growing the fastest at 42%. But Asia, which at 37% of overall sales is the largest market, grew only 20%. Excluding the online businesses, sales grew 14% in Asia, mainly driven by the opening of new stores.

Retail, which means sales at the group’s own stores, outperformed wholesale, or sales to third party retailers, once again. Retail sales were up 13%, compared to just 1% for wholesale, attributed to a continuing pruning of the distribution network. Because much of Richemont’s watch brands sell their wares through third party retailers, it indicates a weakness in the watch business.

Sales at Richemont’s watch brands grew only 2%, with a slightly fall in margins to 18.5% due to inventory buy-backs, where watch brands either buy or swap unpopular or old models stuck in retailers’ inventory.

Jewellery, on the other hand, performed significantly better, with sales rising 9% despite it being more than twice the size of Richemont’s watch business. Made up of Cartier and Van Cleef & Arpels, the jewellery division also saw margins rise slightly to 33.8%.

For the full announcement, visit Richemont. 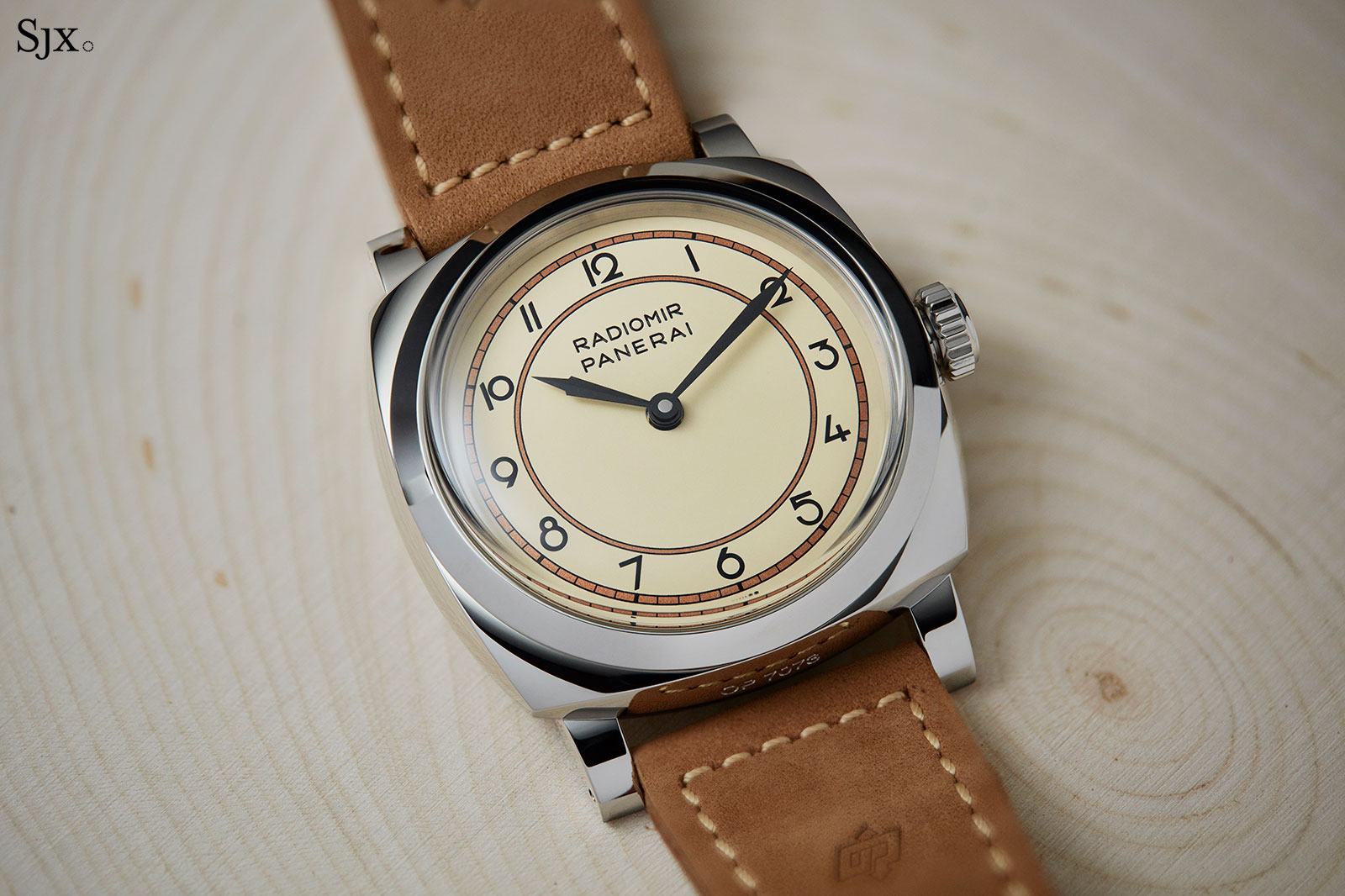 Quietly previewed at SIHH but only just officially launched, the Radiomir 1940 3 Days Acciaio PAM 790 and PAM 791 are atypical for Panerai. They look nothing like convention because the dials are based not on vintage Panerai wristwatches , but, according to Panerai, on a vintage pendulum clock once sold by Orologeria Svizzera, the watch and clock store in Florence owned by the Panerai family.

Panerai doesn’t reveal the make of the clock, but it could have been any number of brands. The Art Deco styling is actually fairly generic for the 1930s, with such dials being fairly common on all sorts of clocks from the period. While the source of inspiration is general rather than specific, the watches are appealing, albeit not to Panerai traditionalists. Notably, the dials are printed with a greater degree of detail than standard Panerai dials. The more striking of the pair is the Radiomir 1940 3 Days Acciaio PAM00791. The dial is smooth ivory, and matched with black hour numerals and hands. Both the minute and inner track of the dial are printed in copper powder, which gives them a granular, slightly reflective metallic texture. And the lettering at 12 o’clock is engraved and filled with black lacquer in traditional Panerai fashion. But the ivory dial accentuates the size of the watch, which at 47mm is already large. The expanse of the light-coloured dial makes it feel even larger than it is.

That is less of a problem with the Radiomir 1940 3 Days Acciaio PAM00790 because it has a black dial. The design is identical, as is the execution – the tracks are also printed in gold powder lacquer – but it feels more closely related to a typical Panerai with the black dial. That’s either a good, or boring, depending on the perspective. Also an engraved logo below 12 o’clock

Both watches feel slightly empty, and could do with a subsidiary seconds – a square sub-seconds would be intriguing – or power reserve indicator, features also found on 1930s clocks.

The rest of the watches are identical to the standard Radiomir 1940. The polished steel case is 47mm in diameter, with a highly domed sapphire crystal on the front. While Panerai has started making simpler cases in recent years (with press-fit backs for instance), its top of the line cases are still admirably well made, a fact that is often overlooked since they have become so familiar. Inside is the second generation P.3000 calibre, a large, hand-wound movement developed by Panerai to replace the ETA Unitas 6497 that was once the most common movement in Panerai watches.

The second generation is set apart primarily by the separate cocks for the wheel train, which make the movement more visually appealing, despite having no functional advantage. While the movement is a simple one, it does incorporate interesting details, including the free-sprung, adjustable mass balance wheel. Of more immediate utility to the wearer is the independent adjustable hour hand, which can be set in one-hour steps backwards or forwards, an eminently useful feature when travelling. The decoration of the movement is standard fare for Panerai. Pronounced linear brushing covers all of the bridges, which have wide bevels along their edges. All of the bevelling is done by machine, showing the telltale marks left by the tool that cuts the bevel. It’s a clean and functional appearance that is in keeping with the spirit of the watch, and acceptable at its price point. Though the look is surprising for Panerai, it is in sync with the brand’s unstated but obvious strategy of making watches more inclined towards civilians – the slim Luminor Due is a good example – rather than sticking only to an unforgiving marina militare look. In summary, it’s a good looking watch, but could do with being slightly smaller. In fact, the Art Deco dials would have been perfectly at home on a Luminor Due. And if past habit is anything to go by, they will debut on the Luminor Due if this pair of watches sells well. 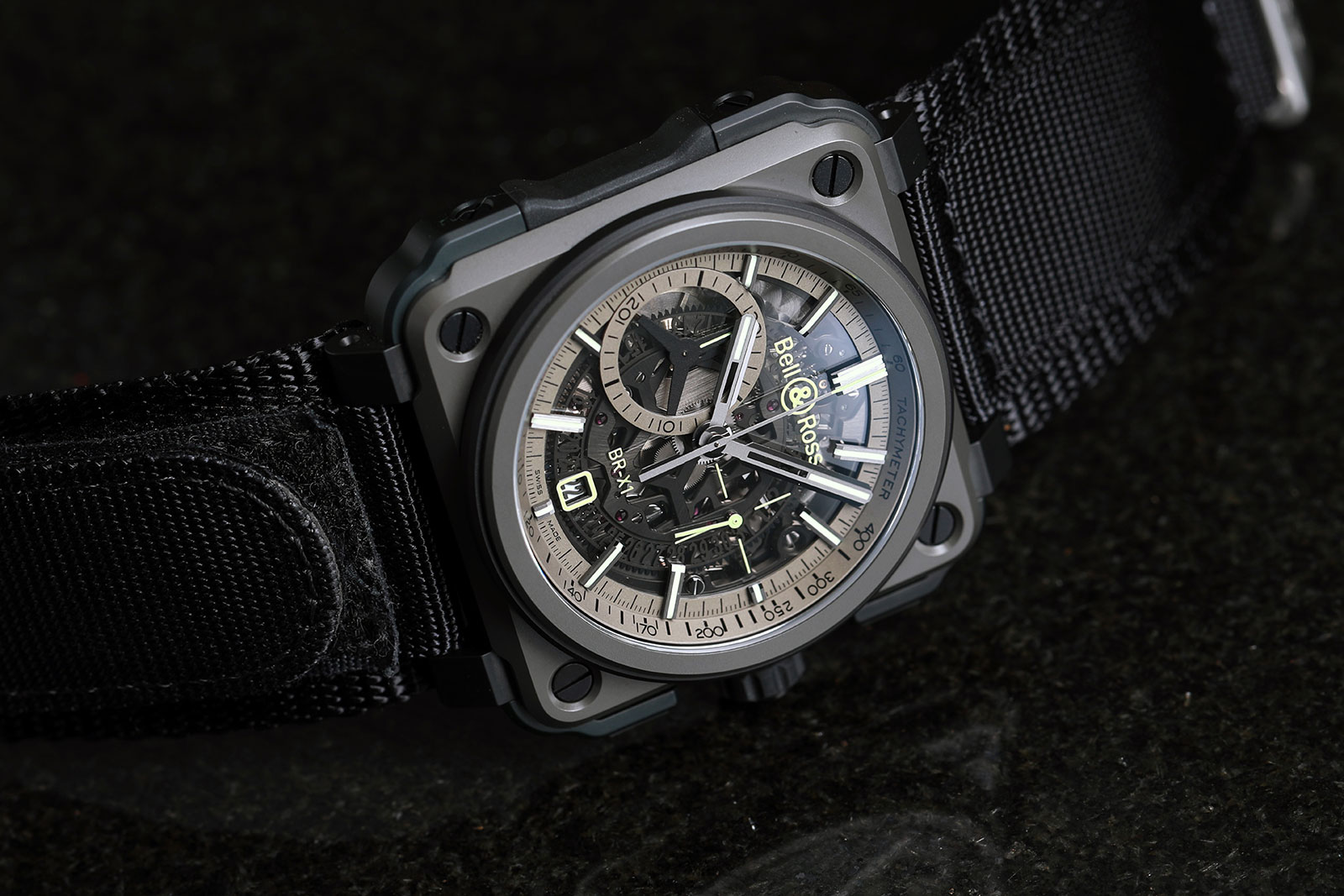 Only a handful of watch brands can claim to have created a modern day icon, especially one that is relatively affordable. Bell & Ross (B&R) can stake a legitimate claim to that, thanks to its signature circle-within-a-square BR 01 that has become one of the most recognisable 21st century designs.

Inspired by aircraft control panels, the BR 01 was conceived for legibility and functionality, but has since evolved to include the Experimental line of watches, which encompasses sleek, complicated watches and also the bigger, bolder BR-X. The BR-X sticks to the blueprint of the BR 01 case while pushing the boundaries of design and materials, an endeavour that, it has to be said, comes at a price.

Returning to its roots

The BR-X1 Military is in some ways a throwback to the origins of B&R, which got its start supplying Sinn watches to French military and police units. While many watches in B&R’s current line-up are “retro” military, inspired by the 1940s and 1950s, the BR-X1 is unmistakably modern.

Marrying the experimental spirit of the BR-X with the brand’s military inclination, the BR-X1 Military is conceived to look like a high-tech, high-end instrument for modern warfare. Though it’s more likely to wage war across a desk or laptop, the BR-X1 is the sort of go-anywhere-do-anything watch that makes it practical, while allowing the owner to look like a full-fledged badass. The BR-X1 Military retains the signature square form that has defined B&R – here 45mm by 45mm – but with the bodykit that characterises the BR-X line, with ceramic and rubber inserts around the case that act as bumpers.

The clearest visual indicator its military inspiration is in the subtle grey-olive hue of the case. It’s actually the result of treatment that alters the surface of the titanium alloy, making it harder and more scratch-resistant. Lightweight and resilient, the titanium alloy has been named High Resistant Titanium (HRT). Naturally the watch has a strong and significant presence on my 6.5 inch wrist, appropriately large for the style without being jarringly oversized thanks to the short lugs. It wears light and snug, especially on the optional fabric strap. Like most of the BR-X collection, the BR-X1 military is fitted to a rubber strap as standard but I find the velcro band takes the military look a little further.

Another signature feature of the X1 chronographs are elaborately skeletonised dials that include an open-worked movement base plate.

The dial, or lack thereof, is complements the military style well, sticking to same smoked olive palette, but with more brighter shades to provide the necessary contrast. Its applied markers are crisp and sharp, finished with a satin brushing that is reassuring for a watch of this price. Similarly, the hands are open-worked, three-dimensional, and finished with alternating textures that make them more interesting but also help legibility. The date window is at six o’clock is outlined by a green border, while the skeletonised date wheel sits on a white backdrop for maximum legibility.

Circling the dial is a tachymeter scale, which is used to measure speed over a fixed distance and usually associated with auto racing chronographs, an unusual feature for a military watch. Telemetric scales are more typical of military watches, since they allow the measurement of distance to an object, making them useful for artillery and naval gunnery. B&R’s foundations as a military watch brand – which means legibility and functionality are paramount – means a satisfying low-light display, and the BR-X1 Military doesn’t disappoint. Key indicators on the dial have generous coatings of Super-Luminova, putting on quite a show when the lights are out. Visible below the transparent sapphire dial is the BR-CAL.313 movement, open-worked to exhibit its mechanics, conveying a sense of depth and complexity. Coated in different shades of charcoal and grey, and decorated with varying surface finishes, the various visible components contrast well against each other. The movement is decorated to a degree that one would expect from such a watch, with the X-shaped upper bridge receiving the most attention, with brushed top surfaces and prominent machined bevelling.

While the movement is elaborately styled, it is still based on the ETA 2894-2, which is essentially an ETA 2892 with a Dubois-Depraz module on top. Though reliable and robust, the 2892 is a common and inexpensive calibre. The bulk of the cost of the money is undoubtedly in the skeletonised chronograph module on top, which is custom-made for B&R.

The BR-X1 Military could well be my favourite of B&R’s current offerings. I’m a fan of the military watch genre, and the “tactical” livery speaks to me.

The HRT case with its ceramic and rubber bumpers, screw-down crown, and velcro or rubber straps are all reassuringly hardy. At the same time, the skeletonised movement has a lasting appeal and I find myself admiring the movement architecture, often forgetting to notice the time. However, the watch is one of the more expensive in the B&R line-up, retailing for US$23,000. Even though the fit, finish and mechanics of the B&R are on par with its peers, B&R is a relative outsider in this price bracket. So it runs into stiff competition from the established players in this segment of contemporary sports watches, including Panerai and Hublot.

But the relatively small number made – just 250 pieces – combined with the premium case construction and rugged allure makes the watch an enticing option in a particularly competitive space.

The BR-X1 Military is priced at US$23,000, or S$31,500, and is available at Bell & Ross retailers and boutiques. For more information, visit bellross.com.