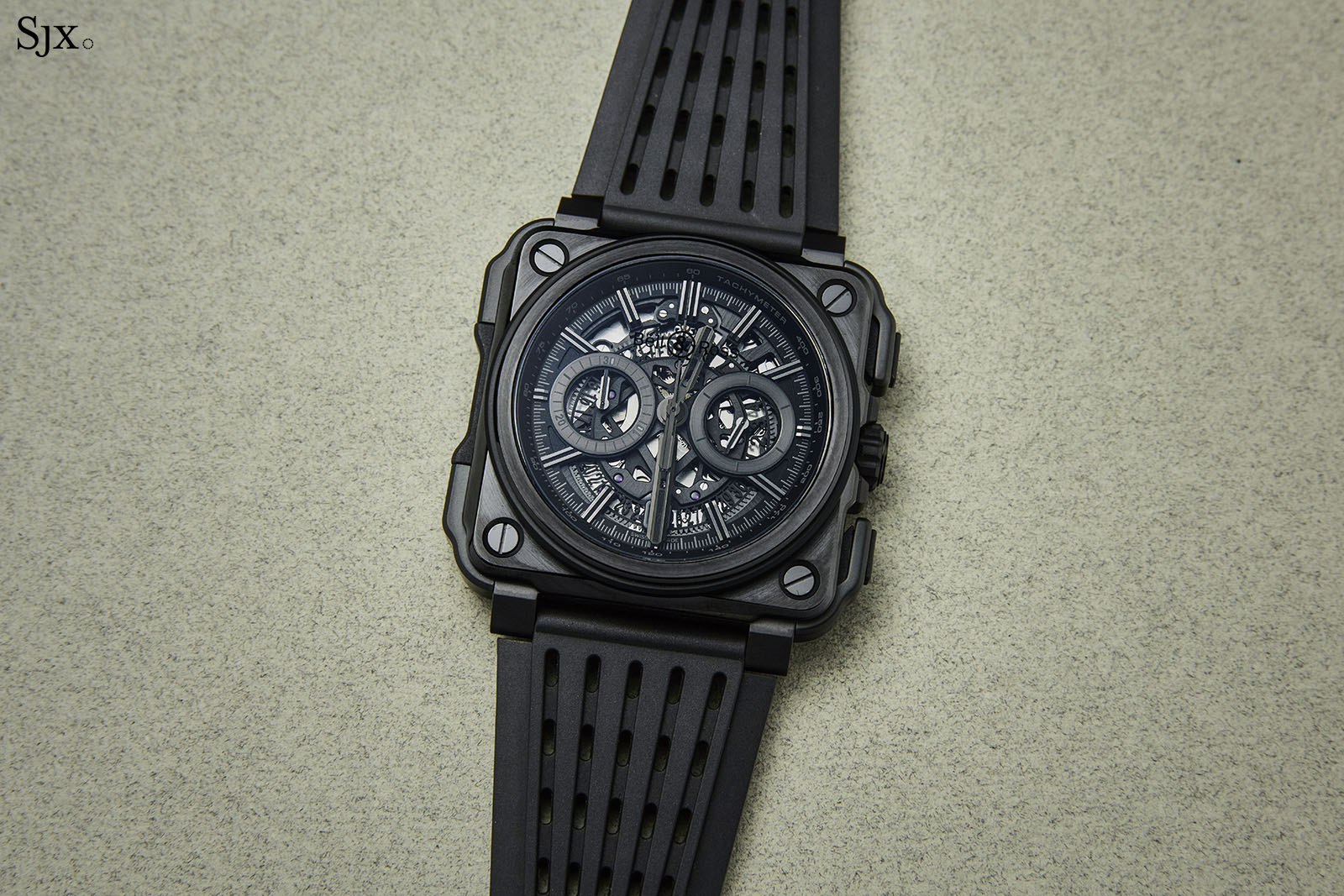 In 2014, Bell & Ross’ signature BR 01 design spawned a futuristic, ultra-graphic spin-off that would take the brand miles beyond the cockpit – the BR-X1.

While the watch inherited the distinctive circle-within-a-square case modelled on aircraft instruments, from there the execution swerves radically away from the retro-military look of the original, with the BR-X1 taking on a greater complexity in both construction and style.

Iterated into numerous variants in the five years since its launch – including a Renault Formula 1 edition and White Hawk – the BR-X1 is characterised by open-worked dial revealing a skeletonised chronograph module and a complex case made up of a combination of materials – here titanium and ceramic – with rocker-style pushers pivoted on one end.

This year, Bell & Ross (B&R) has unveiled one of the most striking iterations of the BR-X1 to date, the all-black Phantom. Watches with black cases and dials are relatively common today, ironically thanks in part to one brand that resisted the genre so vehemently that it spawned an outlaw cult of aftermarket all-black watches. Even with the flood of black watches on the market, few have gone above and beyond in making everything on the watch black.

The first truly all-black watch was the smash hit Hublot Big Bang of 2006, which was followed by hordes more. But the greatest irony of such watches is that the illegible colour palette results in an eminently more striking watch. And as stealth as it is in conception, the result commands attention.

But still, watch designers do try to achieve a modicum of readability. All-black watches are typically put together with different shades of black, applied on various materials and surface finishes to create the necessary contrasts in texture and shades that’s a big part of its appeal. Because of its complex, multi-layered design, the BR-X1 becomes the perfect canvas for the all-black treatment.

The Phantom starts off with a 45mm titanium case that is coated with thin ceramic layer applied via physical vapour deposition (PVD). 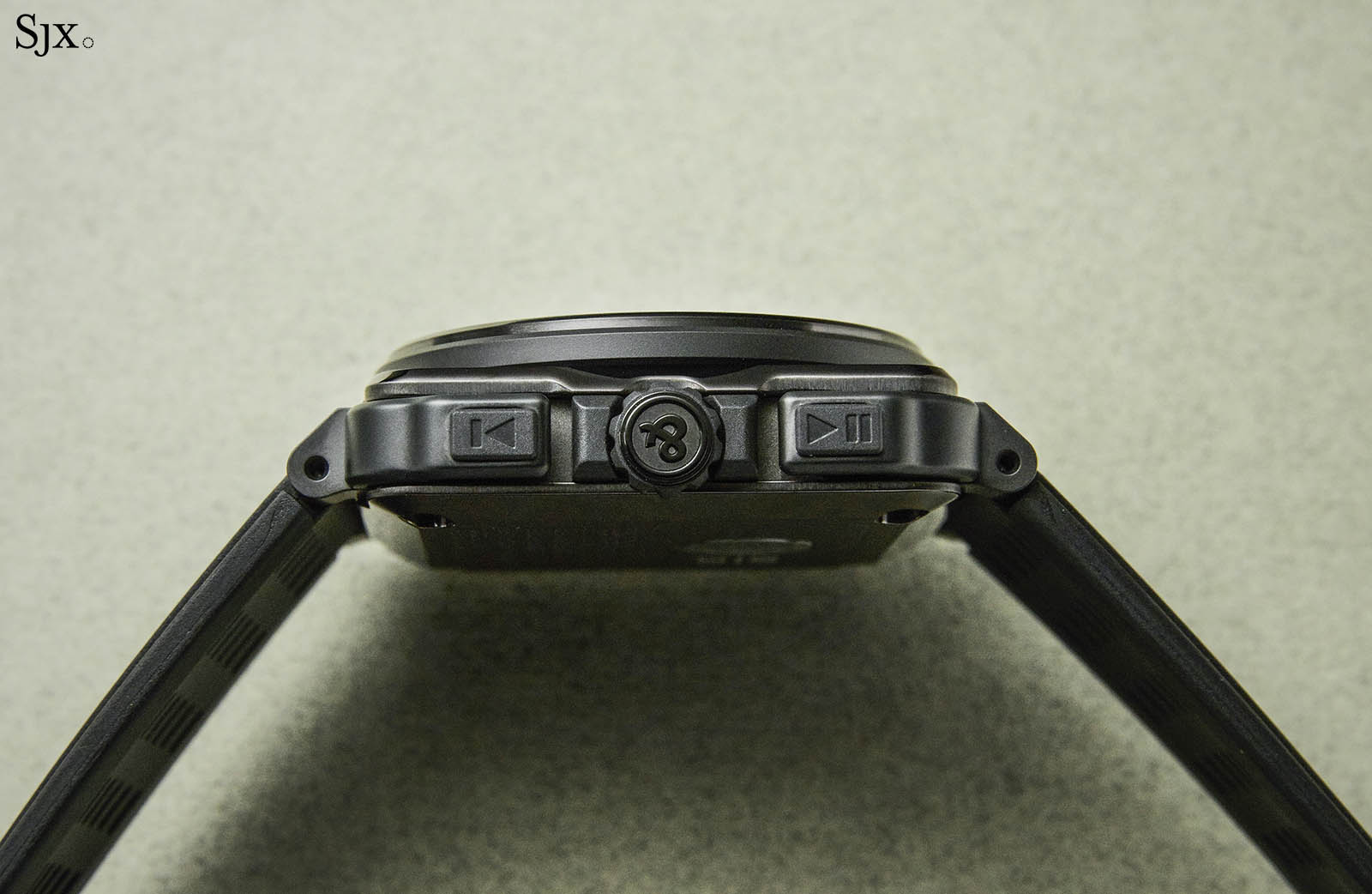 While black surface coatings are not quite a match for solid materials such as ceramic and carbon fibre – since coatings can delaminate, or flake off – they are far more durable than their predecessors of two deacdes ago. Moreover, the choice of titanium keeps the large case lightweight.

The case has a brushed finish and is framed by a black ceramic band. Its rocker pushers are made of black ceramic, with rubber inserts to optimise both grip and strength.

Enhancing its tactility as well as practicality, the case has a rubber insert at nine o’clock that mirror the shape of the pushers, but also serves a practical purpose: offering a more secure grip when activating the chronograph buttons. 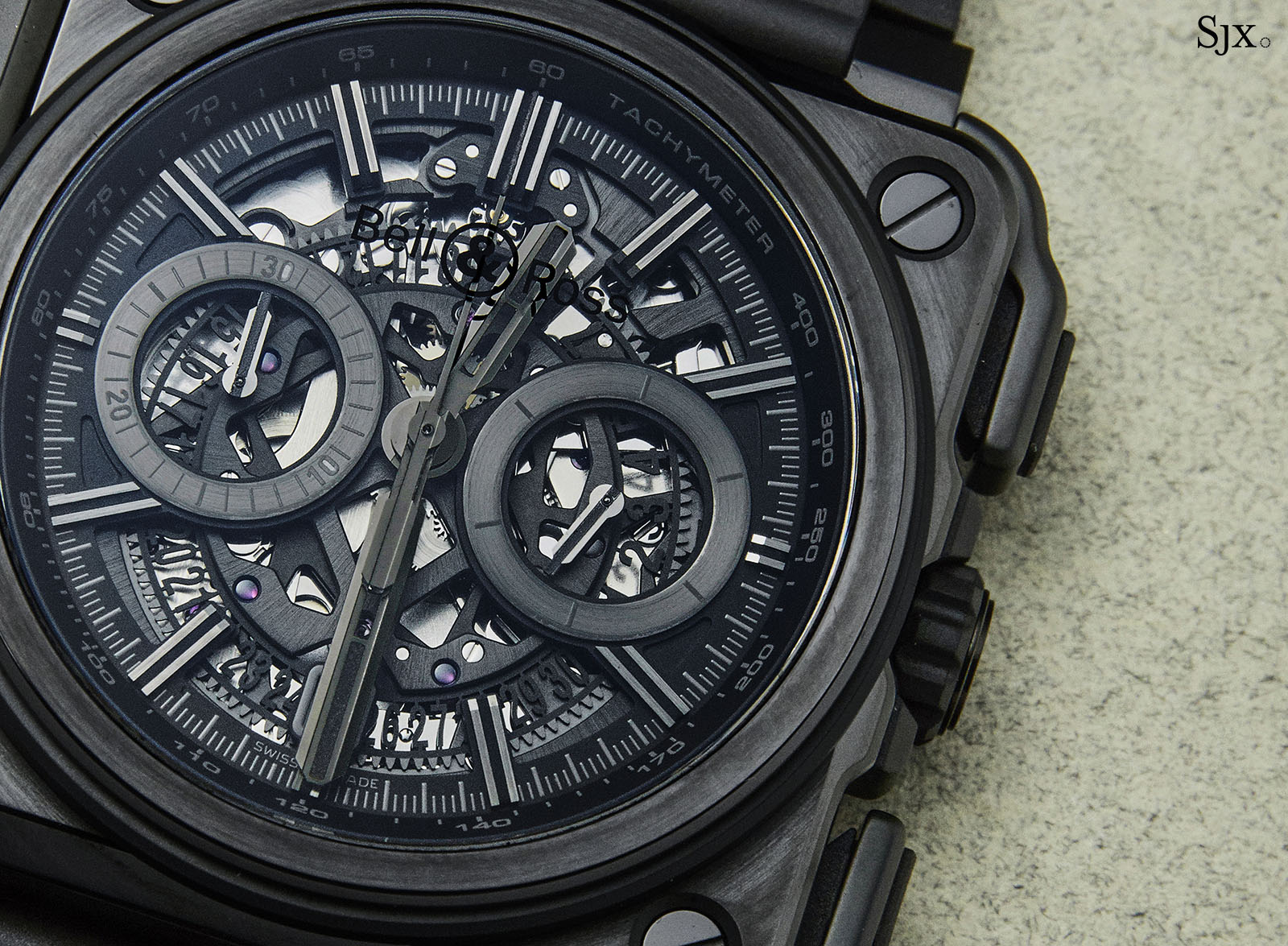 As most of B&R’s cases, the BR-X1 case is made by G&F Chatelain, a sister company of B&R – both are owned by Chanel – and the same company responsible for the cases of Richard Mille and MB&F.

Unlike the smaller BR 03 cases that have perfectly aligned screws that are actually nuts secured from the back by actual screws, the case for the BR-X1 is a sandwich held together by functional screws hence the slots are randomly aligned. 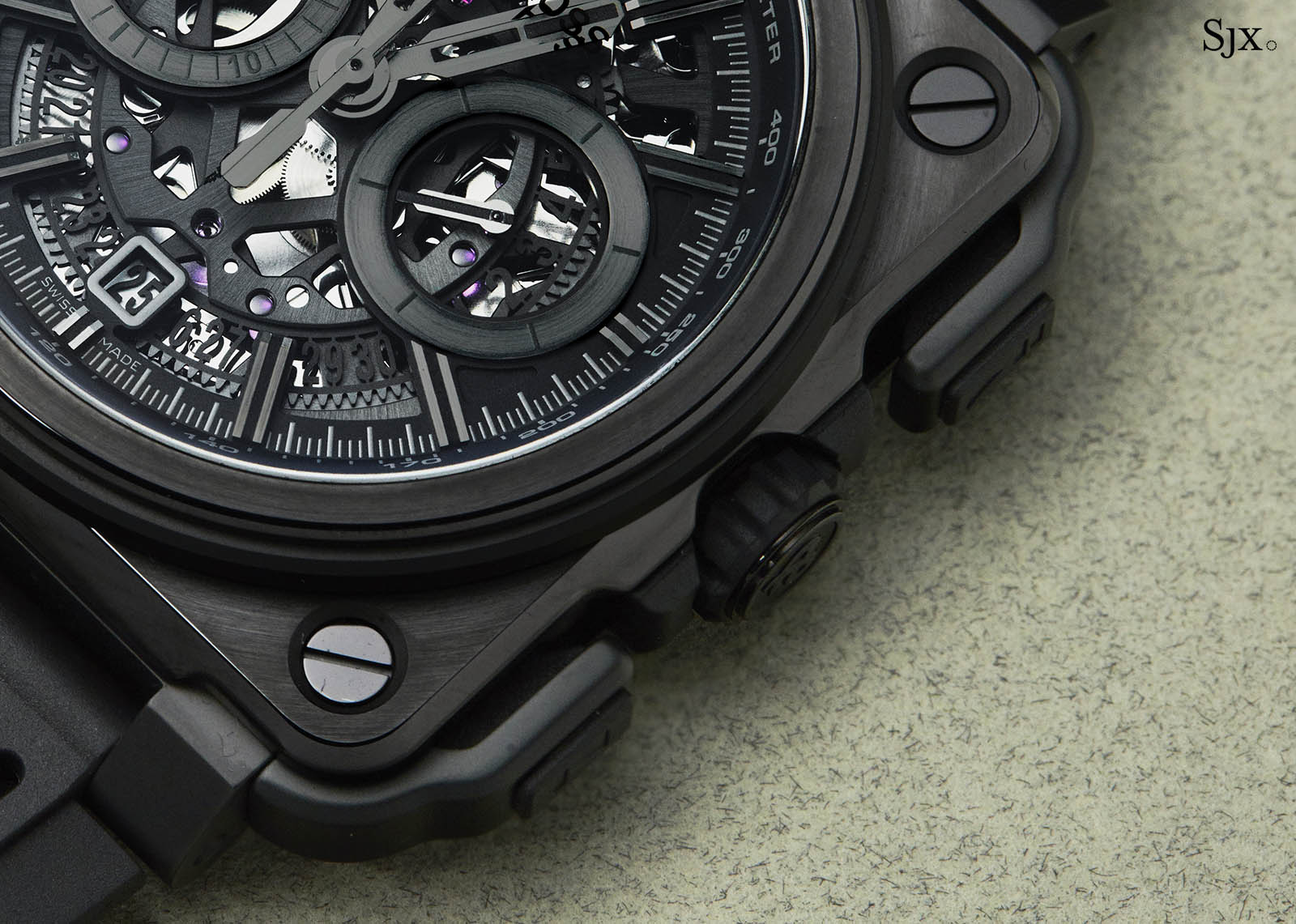 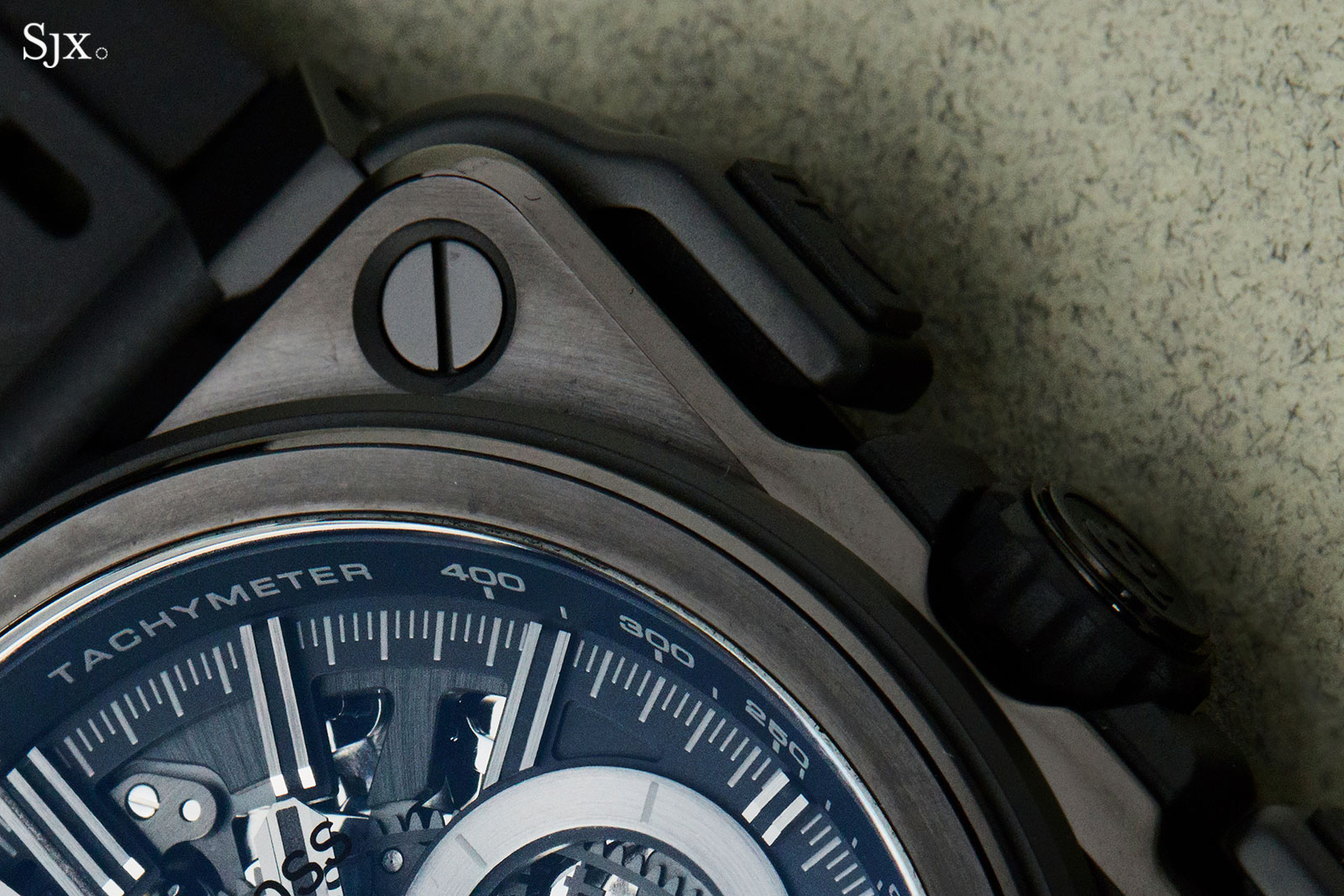 The dial of the watch is open-worked, with skeletonised counters and applied, elongated indices that sit on the chapter ring of the tachymeter, while the hands are faceted. Everything is in shades of black, even the tachymeter flange, which has its markings in a slightly lighter tone of black. Both the hands and indexes are all filled with black Super-LumiNova, which glows in the dark, albeit dimly compared to conventional white “lume”. 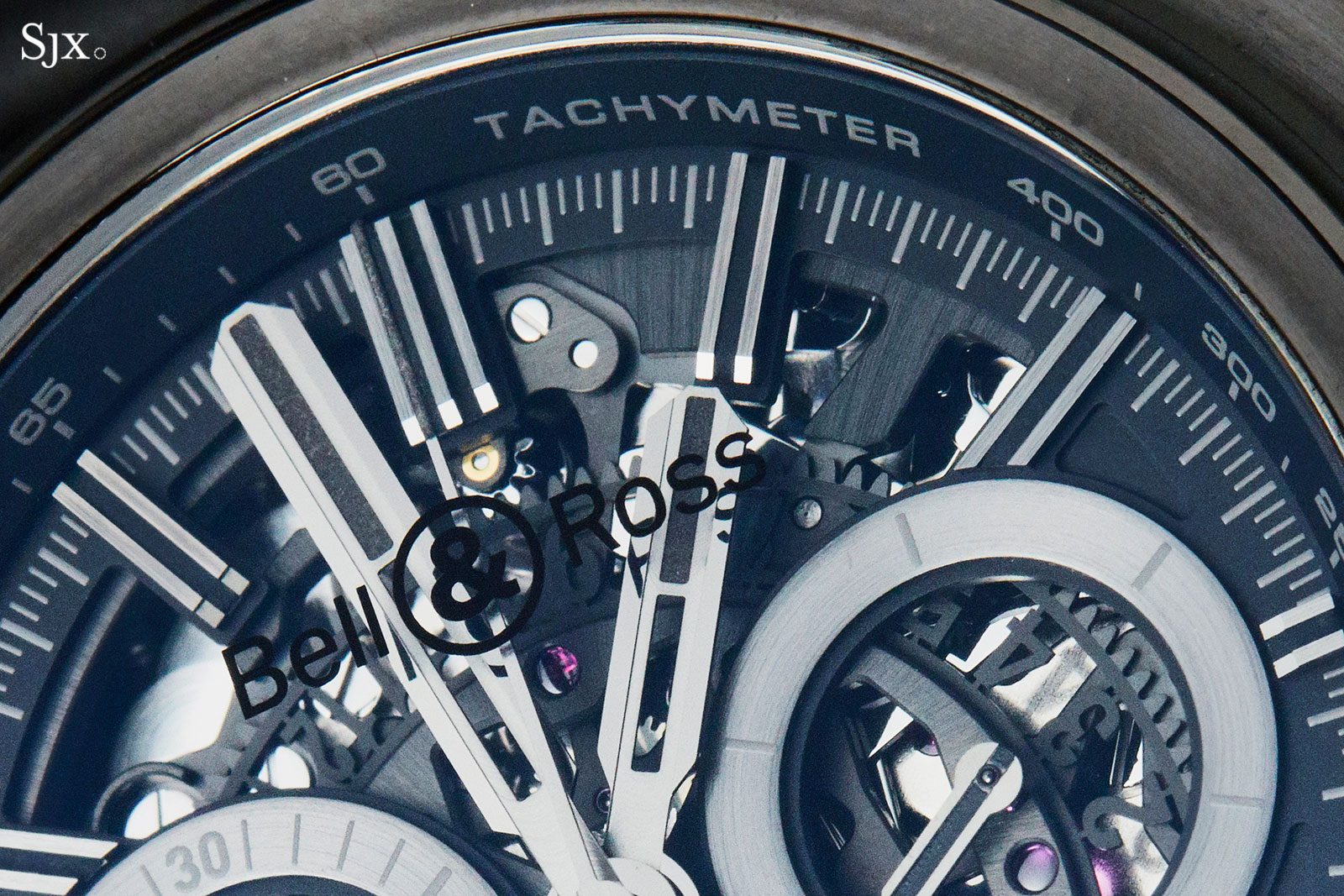 Notably, unlike all other BR-X1 chronographs which simply have the hashmarks for the seconds counter printed on the sapphire crystal, the Phantom features a black metal frame around the register, enhancing legibility, while making the dial symmetrical. 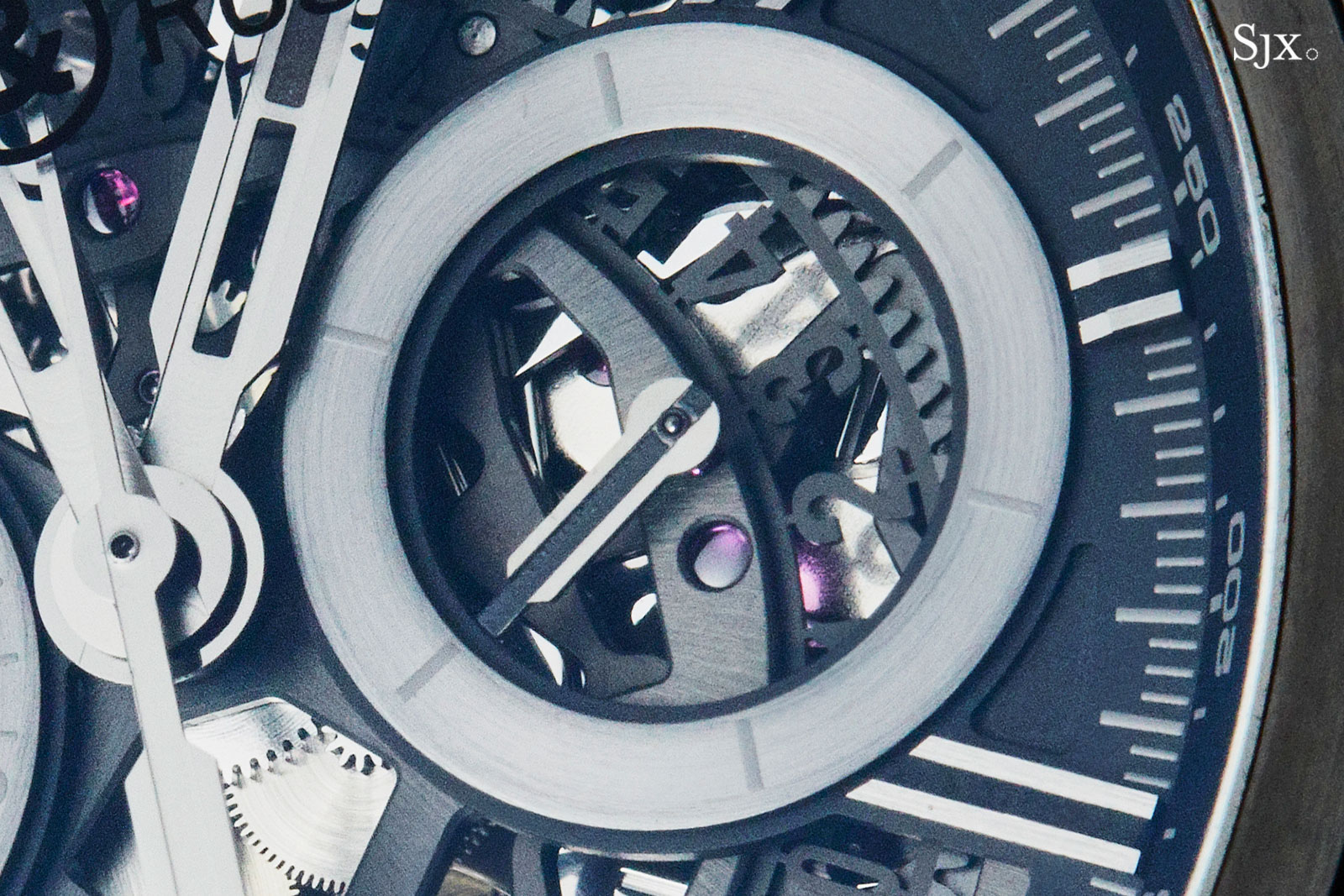 Though the skeletonised date ring has a black finish, the date display at six o’clock has a white insert, which is slightly odd in terms of visuals but inconsequential and also better for legibility of the date. The movement inside the same one found in al BR-X1 watches, the BR-CAL.313, which is an ETA 2892 with a Dubois-Depraz chronograph module on top.

While the module can be found in many other watches on the market, here it has been customised for Bell & Ross with a skeletonised plate, which is why much of the mechanics are visible through the dial. Most prominently, the main plate has been open-worked to form an “X”. 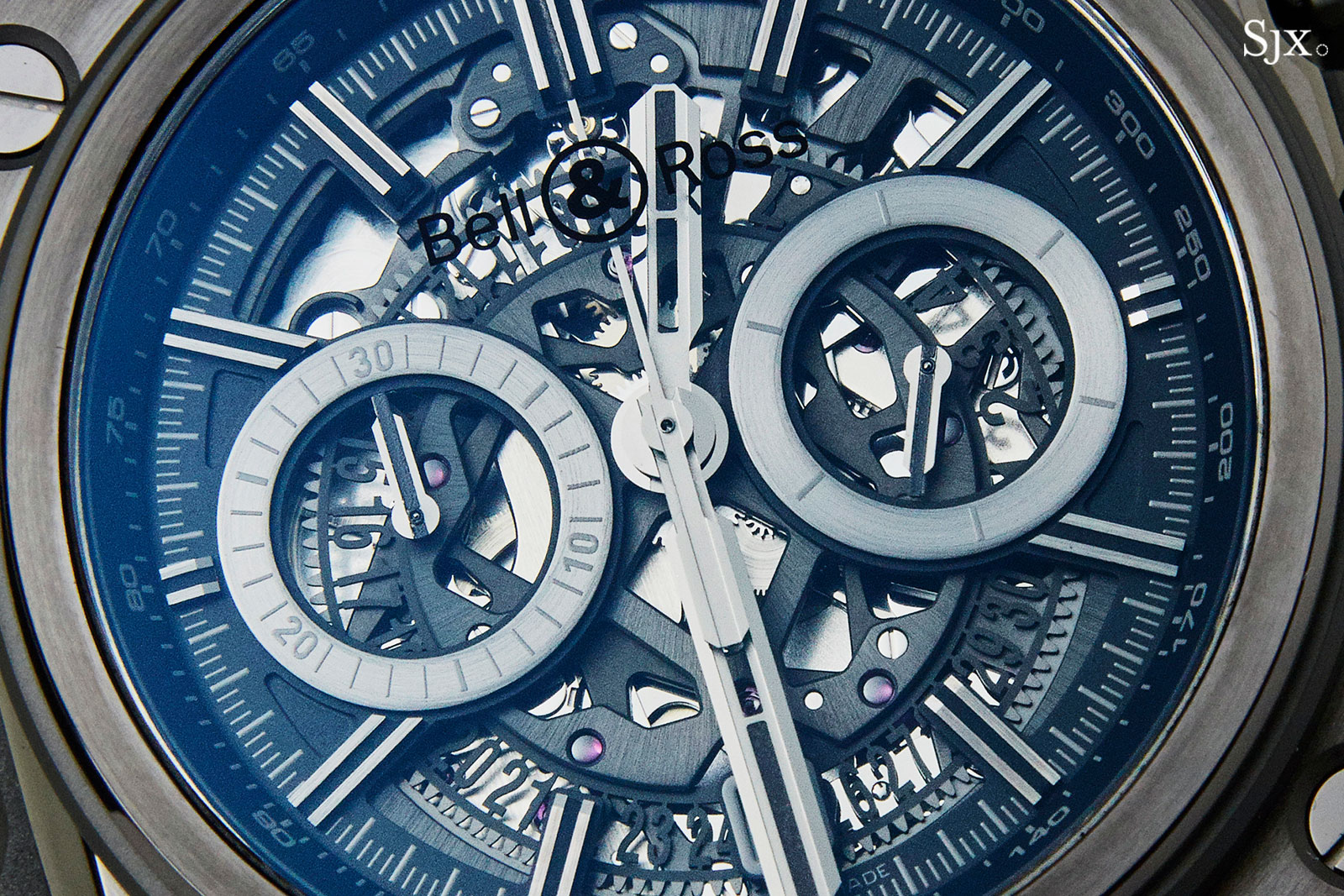 Though only the upper bridge and date ring of the movement have a black finish – the rest of the gears and base plate do not – the striking uniformity and effect of an extremely black watch is both unsettling and magnificent.

The reverse doesn’t offer much of a view. Executed in the same manner as most other BR series watches, the case back is solid with a tiny porthole displaying the balance wheel as well as a description of materials that the case is composed of. 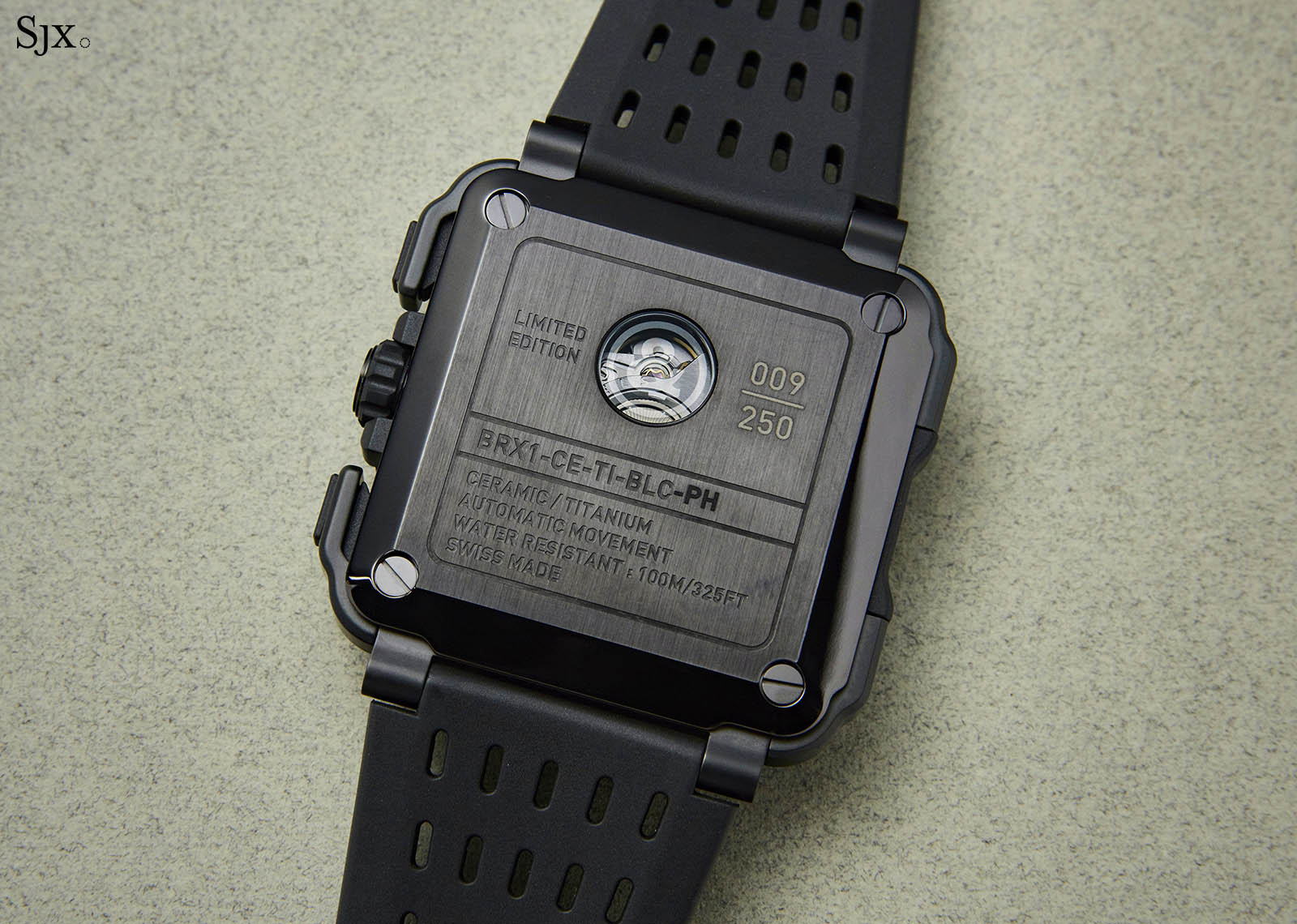 While there have been numerous iterations of the BR-X1, nothing beats the subversive appeal of this stealthy, all-black version.

However, the price tag of US$19,000 puts the watch in a segment where it faces stiff competition from a slew of brands that offer watches put together with pretty much the same formula – futuristic, skeletonised dials with multi-material cases – from the likes of TAG Heuer, Zenith and Hublot.

But what sets the Phantom apart is the limited number of pieces made and ultimately, its superb case construction and inimitable form.