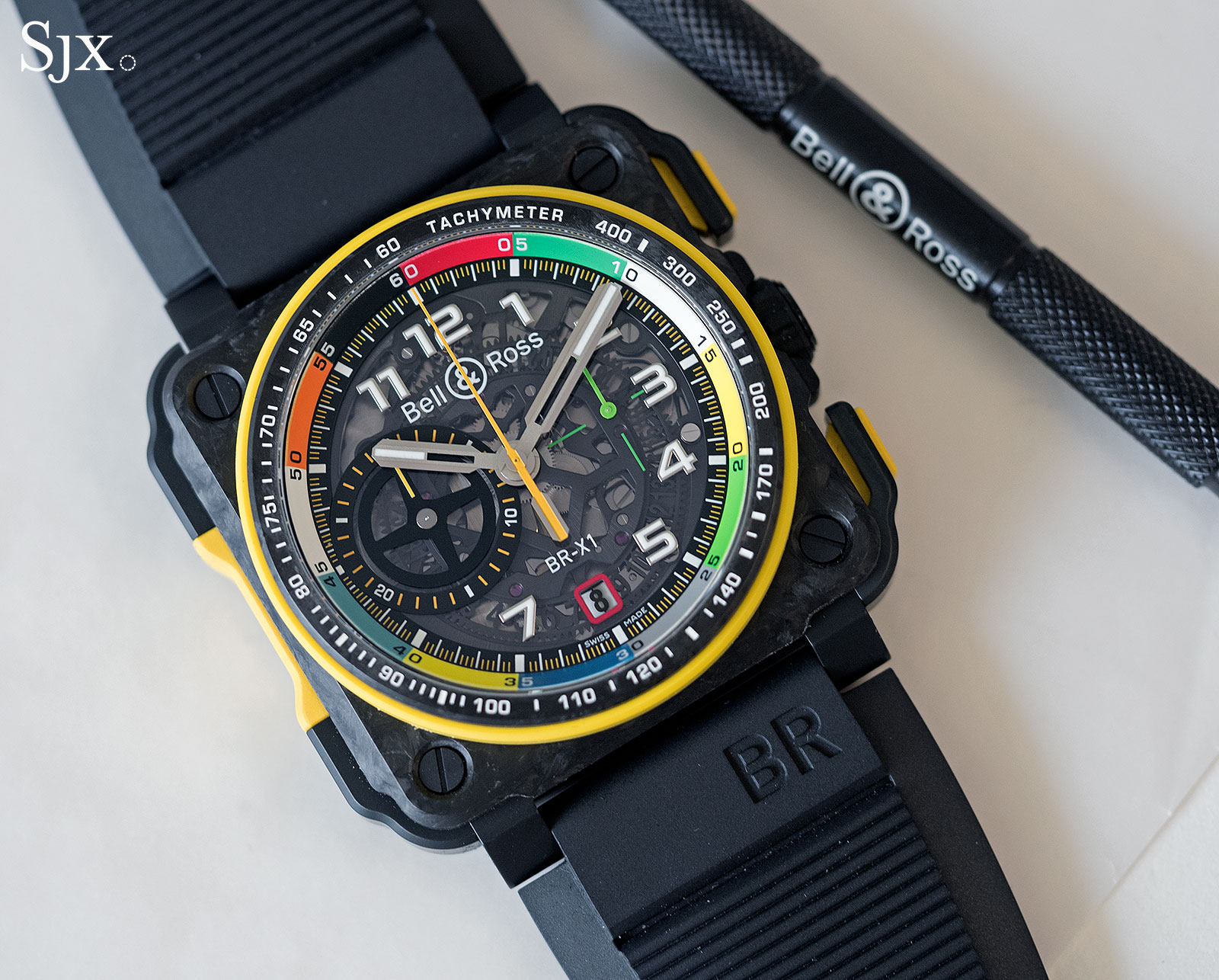 The steering wheel of a Formula 1 car is an exceptionally complex instrument, with several dozen buttons and an LCD screen, all of which allow the driver to monitor and control the car’s myriad functions, ranging from the pit lane speed limiter to switching fuel tanks. Everything is colour-coded and designed to be legible in an instant – providing the inspiration for the Bell & Ross BR-RS17 chronographs.

The official timekeeper for the Renault Sport Formula One Team since 2016, Paris-based Bell & Ross has applied the colour palette of the steering wheel of R.S.17 racing car – Renault’s car for the 2017 season – onto a trio of limited edition watches, all based on the brand’s signature square watch case. The base model is the BR 03-94 R.S.17 in black ceramic. Functionally it’s straightforward: a two-register chronograph with a date, so the colour-coding is intuitive.

The constant seconds at three o’clock is in green, while everything concerning elapsed time of the chronograph is in  bright “Renault” yellow, the same shade found on Renault Formula 1 cars. So the central seconds, 30-minute counter and tachymetre scale are yellow, as is the anodised aluminium start and stop button of the chronograph. And inevitably for a Formula 1-inspired watch, the dial is a slice of carbon fibre, or more properly carbon fiber reinforced polymer. It’s a sheet of woven carbon fibre – the weave gives the material its distinctive look – set in a hard polymer that allows it to be cut into shape.

The dial is attractively detailed, with applied numerals and anodised aluminium rings for the date window and 30-minute counter. And up close the lettering on the dial is sharp around the edges, with no bleeding or fuzziness, which speaks to the quality of the dial. The case measures 42mm by 42mm, so it feels large but not extremely so (unlike the 46mm BR 01). And the matte black finish of the ceramic helps it feel smaller.

It also features a simple but effective construction found on all BR 03 models. The visible screws on the front all line up perfectly with their slots pointing inwards, because they aren’t actually screws. Instead they are nuts with square profiles that slot into the case from the top, and are secured by screws on the back. It’s actually similar to the case of the Audemars Piguet Royal Oak, which similarly uses hex-shaped nuts on the bezel. The BR 03-94 RS17 costs just over US$6000, a fair proposition for the build quality, even when compared against its peers.

The BR X1 R.S.17 is essentially the base model on steroids. It’s functionally identical to the ceramic model above – a two register chronograph with date – but far more elaborately put together, inside and out. Larger at 45mm by 45mm, the BR X1 RS17 is nevertheless lightweight because the case is a mix of ceramic and carbon composite. Carbon composite is made of carbon fibres set randomly inside a polymer, resulting in its marbled appearance (which is distinct from the woven carbon fibre used on the dial of the BR 03-94 RS17).

While the top and back are carbon composite, the case middle and lugs are ceramic. Notably, the screws on the bezel are actual screws, which is why they do not align. The chronograph pushers are “rocker” style, meaning they are pivoted at one end, a feature found on all BR X1 watches. Here they have yellow rubber inserts, which are also found on the bezel and the ceramic case flank. It is a complex case construction built to high quality. Though the look is complex, the colour-coding is similarly intuitive. Constant seconds is in green, while the chronograph – central seconds and register at nine o’clock – is in yellow. The date is framed in red.

The five-minute segments on the dial flange is brightly coloured to distinguish one segment from another. It’s a striking look, but less functional than the colour-coding for the chronograph. The dial is clear sapphire with applied hour numerals on top, as well as neatly printed markings. Through the sapphire dial the chronograph mechanism can be seen. The BR X1 is powered by the cal. BR-CAL.313, an ETA with a customised skeleton chronograph module that’s visible on the front. With a main plate that’s open-worked to form an “X”, the module reveals the wheels of the chronograph, as well as the skeleton date wheel. With a retail price that’s just past US$24,000, the BR X1 RS17 is challenging value-wise. It offers a lot of detailing, but costs significantly more than competitors that share a similar look though not the build quality.

And the third watch in the series is the BR X1 Tourbillon R.S.17 that costs just shy of US$200,000 (and which was introduced last year in a clear sapphire watch case). It has a similar carbon composite and ceramic case, but is equipped with a single-button chronograph movement featuring a tourbillon regulator. It’s hand-wound with a four-day power reserve. The calibre is produced by MHC Manufacture Haute Complication, a movement specialist founded by former employees of BNB Concept, a defunct movement maker that was taken over by Hublot (also explaining the familiar movement aesthetics). Bell & Ross relies on MHC for its top of the line movements, including the extra-thin BR-X2 Tourbillon.