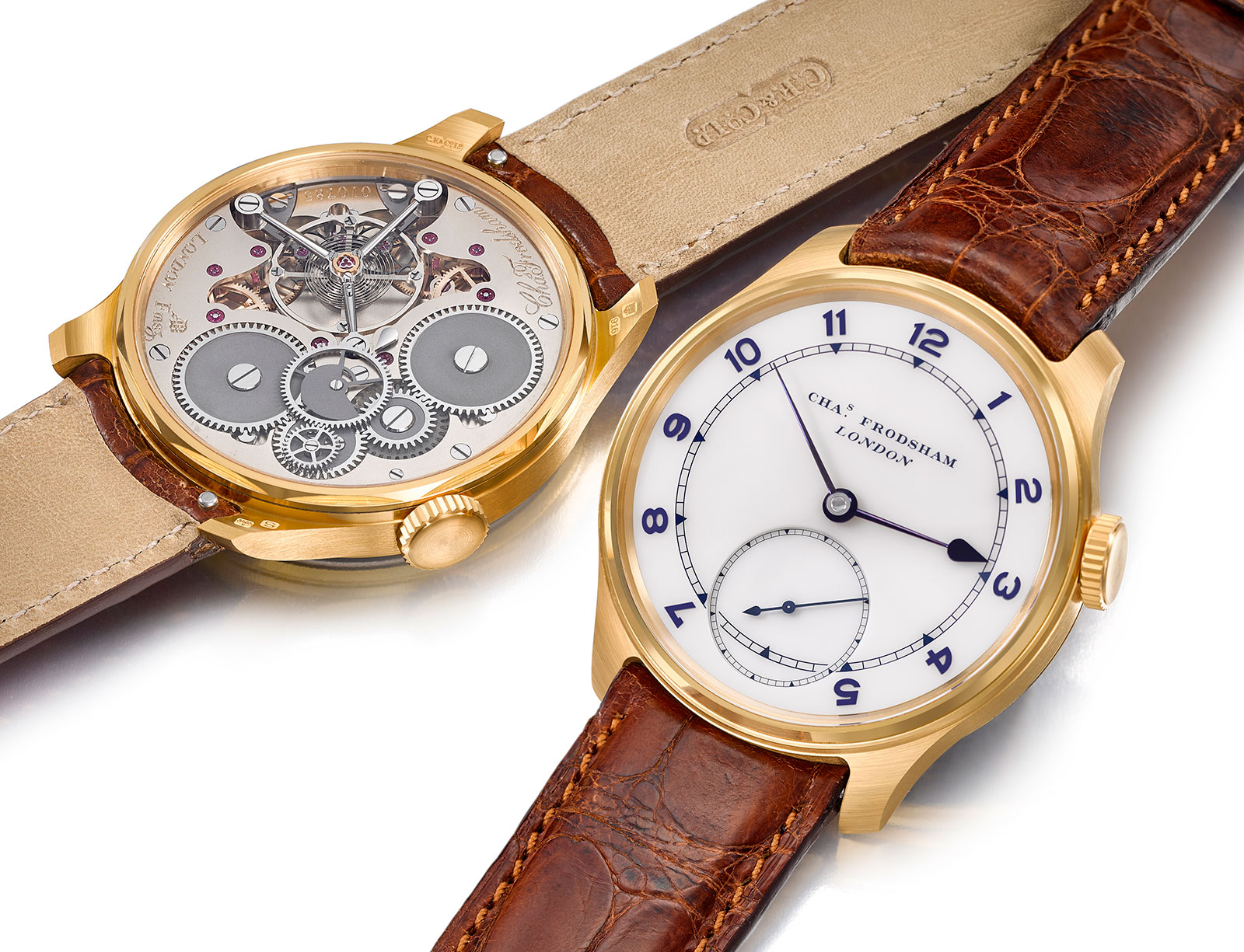 Some 16 years in the making, the Charles Frodsham Double Impulse Chronometer Wristwatch is the realisation of concepts devised by some of history’s greatest watchmakers – Breguet, Daniels and Pratt – and hand-made in England.

The firm of Charles Frodsham & Co Ltd. – today located at 32 Bury Street in central London, while its workshop with half a dozen craftsmen is about an hour outside the city – is the oldest “continuously trading firm of chronometer manufacturers in the world”.

Charles Frodsham started in the watch business in 1834, with his namesake firm specialising in pocket watches, marine chronometers and clocks for much of its history. The historical Frodsham company is perhaps best known for being the favoured watchmaker of American banker J. Pierpont Morgan, who gifted Frodsham pocket watches to his partners in J.P. Morgan.

As the rest of the English watch and clock making industry evaporated around it, the firm evolved into a mantel and carriage clock specialist in the latter half of the 20th century, with several various members of the British Royal family owning Frodsham clocks.

Now owned by horologists Philip Whyte and Richard Stenning, the firm does most of its business restoring and selling historical Frodsham pocket watches, the business of antiquarian horology as very traditionally minded collectors might put it. But the company retains a tangible connection to its past, with the great-great-great grand-nephew of the firm’s founder, Simon Frodsham, sitting on its board.

A no-expense-spared wristwatch – with a miniaturised double-impulse detent escapement no less – had always been on the minds of its owners. With Frodsham’s history of making chronometers with detent escapements, the original idea was to implement such an escapement in a wristwatch. But like others who have attempted to do so, the inevitable problem arose: a detent escapement often stops when subjected to a shock. The solution was suggested by the late Derek Pratt, a contemporary of George Daniels, and best known for his work with Urban Jurgensen & Sonner. Mr Pratt put forward Mr Daniels’ double-impulse chronometer escapement, which like the detent escapement is almost frictionless, but unlike its detent cousin operates on twin impulses rather a single, unidirectional impulse.

Inspired by the double-wheel escapement invented by Breguet, the George Daniels double-impulse chronometer escapement was installed in a handful of Mr Daniels’ timepieces, including the landmark Space Traveller that sold for US$4.32m last year.

Notwithstanding its technical complexity, the principle of the double-impulse escapement is fairly straightforward. Each escape wheel is driven by its own gear train and barrel, and turns in an opposite direction from the other. Both escape wheels operate against a detent in between the two, and the motion of the parts is tangential or radial, rendering it almost frictionless, which is why the escapement is lubrication-free. That contrasts than the sliding action that characterises the Swiss lever escapement, and which needs oiling. Mr Pratt made his suggestion sometime in 2002, and a working prototype was completed in 2008. In the following decade Frodsham busied itself with other projects, including replicas of John Harrison’s H3 and H4 marine chronometers, as well as a carriage clock for Queen Elizabeth’s Diamond Jubilee in 2012.

So that makes the Charles Frodsham wristwatch a little bit like the Harry Winston Opus 3 by Vianney Halter, a wristwatch long anticipated and much discussed – and finally complete after 10 years.

Amidst substantial secrecy your corespondent visited Frodsham in January, just after SIHH 2018, with Richard and Philip kindly explaining the intricacies of the wristwatch, albeit prohibiting photographs. The Frodsham watch is a solid, high quality timepiece, vaguely reminiscent of British colonial era engineering; think the Armstrong Siddeley Sapphire limousine or a Brigg umbrella.

It’s the first commercially available wristwatch Charles Frodsham has ever made. The last time the firm experimented with wristwatches was with a handful of prototypes made in the 1940s powered by Smiths movements and intended to compete for a British military tender. Intriguingly, despite Frodsham’s small scale, the watch is produced almost entirely in-house, right down to the jewels. The rubies in the movement are all new old stock from Frodsham’s stock, originally produced in the 19th and early 20th century for small pocket watch movements.

The most unusual visual feature of the watch are the hour and minute hands, made of blued steel naturally, that are both the same length, distinguished instead by their shape. The hour hand is tipped with a spade, while the minute hand narrows to a sharp point.

The style is based on an early 1900s Charles Frodsham pocket watch with tourbillon regulator that features a similar dial design, one that was later replicated for the carriage clock made for the Queen’s Diamond Jubilee. The pocket watch that inspired the wristwatch

The case is a large, straightforward form, measuring 42mm with integrated lugs. One of the world’s most eminent watch experts described the case as being reminiscent of the IWC Portugieser, but with a feel of massive quality.

It’s available in steel, 18k rose or white gold, as well as an unusual 22k yellow gold. Despite the higher purity, the 22k alloy is as hard as 18k gold, because it has been forged and then hard rolled. All precious metal cases are hallmarked on the back of the lugs in typical English style, with large assay marks on three lugs. Perhaps the most unconventional aspect of its design is the position of the crown, between two and three o’clock. That is a consequence of the movement construction, though Frodsham also notes that it helps prevent the crown from digging into the back of the wrist.

The dial is a pure glossy white, being made of ceramic. While enamel is a more traditional material, ceramic was selected for its robustness; unlike enamel it is not prone to cracking. It’s matched with applied, blued steel hour numerals – available as Romans or Arabics – while the lettering, minute and seconds track are metal deposits on the dial surface, meaning they will never fade or peel. Despite being a time-only movement, the calibre is impressively put together. The approach is rigorously technical, with an uncompromising approach to intrinsic and manufacturing quality, and practically devoid of superfluous embellishments. That’s because both Messrs Stenning and Whyte are inclined towards discreet quality that speaks for itself. When quizzed on why the large gold assay marks are found on the back of the lugs, instead of on the sides of the case as a decorative touch, they demurred, with the implication that such a feature would be unnecessarily showy. The movement is hand-wound with a hack seconds, featuring a 36-hour power reserve and runs at 21,600 beats per hour. The double-impulse detent escapement takes pride of place in its symmetrical layout, with the balance and barrels each taking up essentially a third of the real estate.

Beyond the double-impulse chronometer escapement, the movement also boasts several other notable features, including a proprietary balance staff design that is longer and narrower than usual, offering greater lateral shock resistance. Another is the brake linked to the discreet snail-shaped power reserve indicator that stops the balance just before the barrels wind down, a hacking mechanism that is distinct from the one which stops the balance when the crown is pulled. And then there is a the power reserve mechanism itself, which relies on a epicyclic differential made up of 12 wheels.

The gears of the power reserve display, with the one on the right being a sun and planet differential

All wheels are 18k rose gold, while all steel components are made from a high carbon steel alloy that’s been tempered in-house in a small oven. And the detent is titanium, weighing as much as a sesame seed, while the balance wheel is a temperature-resistant copper alloy with tungsten adjustable weights. Much attention was also paid to finishing and construction, exemplified by the three-armed balance bridge that’s rounded and polished. Unlike a conventional straight bridge that can be polished by spinning it on a lathe, the tri-legged construction requires entirely manual finishing. Equally impressive is the symmetrical bridge for the twin escape wheels, which has a frosted surface and chamfered bevels on its edges. Only 10 to 12 will be made a year, with the current lead time being 12 months. It is available direct from Charles Frodsham & Co Ltd. in London.

Correction March 18, 2018: The prototype wristwatches for military tender were made in the 1940s, and not 1960s as previously stated.

Characterised by the airy and distinctive custom typeface by graphic designer Philippe Apeloig, the Slim d’Hermès line has come to include a perpetual calendar and an “impatient hour” complication since its introduction in 2015. And now, the brand has unveiled the Slim d’Hermès GMT – an idiosyncratic, yet simple and practical dual-time watch.

A limited edition of 90 pieces, the Slim d’Hermès GMT has a palladium case with trim proportions – 39mm in diameter and 9.4mm in height. As with most things Hermès designs, it is studiedly offbeat and refined. It has a slate grey dial with a sunburst chapter ring under a smoked sapphire crystal.

The home time zone is displayed in a silvered subdial at ten o’clock, which is just a tad bigger than the date counter at six o’clock, and is adjusted via the pusher beside it. The numerals are seemingly scattered across the sub-dial, but are still arranged chronologically, with time indicated by a blue lacquered hand.

As it is a 12-hour display, the second time zone is accompanied by a pair of day-and-night indicators at two o’clock, labelled “L” for local time and “H” for home time, showing white for day and blue for night.

The watch is powered by the compact automatic H1950 from movement maker Vaucher (of which Hermès owns 25%), with the ultra-thin GMT module developed by long-time partner Agenhor, a complications specialist in Geneva. The movement measures 4mm in all, which allows the case to keep to its relatively trim proportions.

Equipped with a countdown function that ends with a single chime.