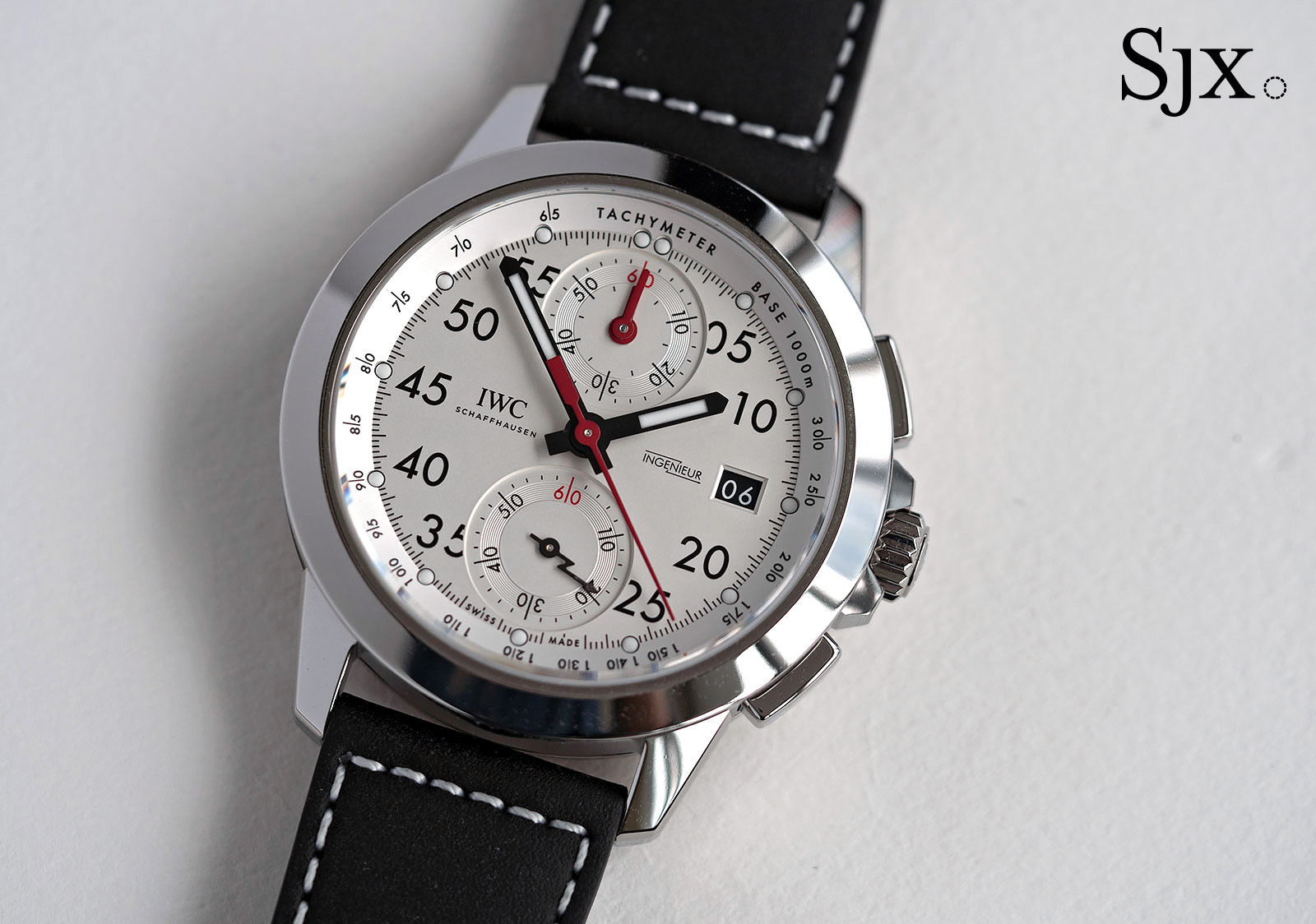 In the last couple of years the IWC Ingenieur line has evolved from a chunky watches into something slimmer, simpler and slightly retro. While most of the Ingenieur watches are pretty straightforward in style, the Ingenieur Chronograph Sport Edition “50th anniversary of Mercedes-AMG” has more zing, along with a strong tactile feel.

Made for the golden jubilee of the Mercedes division famous for its aggressively powerful sedans (albeit ones with smaller engines now that emissions rules are starting to bite), the chronograph takes on a heavily automotive look. It’s not a novel look – the dial is modelled on a speedometer – but attractive and legible. Looking clean and functional, the dial is silver-plated, with red accents giving it a bit of flair. And instead of hour indices, the dial has oversized five-minute markers. The sub-seconds hand at six is shaped like a lightning bolt, a motif derived from the Ingenieur logo and one that’s faintly cheesy but fun. The case is somewhat large at 44.3mm wide and 15.9mm, but feels agile because it’s titanium. While the stock versions of the Ingenieur chronograph are either 18k gold, which is ponderous, or steel, which feels entry-level, the titanium models have a light, solid feel. IWC definitely thinks steel, however, has greater ordinary appeal, as all of the titanium models are limited editions.

While titanium is a common material for watch cases, the finish of the AMG chronograph is not. The case is mirror-finished on the bezel and tops of the lugs, instead of being blasted or brushed as is common for titanium. Matte finishes are easier due to the nature of the metal, but a polished finish looks better. But because of that very nature of the metal the polished surface of the titanium is not quite as flat and mirror-like as when done on steel, though that’s barely discernible for most observers. The cal. 89361 has co-axial hour and minute registers at 12 o’clock, leaving the dial both symmetrical and free of clutter, while also having a flyback function and lengthy 68-hour power reserve. Like most high-end modern chronograph movements, it also boasts a column wheel and vertical clutch.

It is an in-house movement, though like the rest of the 8000 series calibres it shares some basic parts (like the gear train) with the Valjoux 7750. However good it is the movement is unfortunately hidden behind a disc perforated to resemble a brake disc. Like the typical Ingenieur watch, the AMG chronograph features a soft iron cage around the movement to shield it from magnetism. Exactly the same as the original Ingenieur had 60 years ago, it’s a low-tech solution to magnetism but effective. The Ingenieur Chronograph Sport Edition “50th anniversary of Mercedes-AMG” (ref. IW380902) is limited to 250 watches, and priced at SFr12,600. It is available from IWC boutiques and retailers.

AMG marks its jubilee with a supercar and IWC contributes a customised wristwatch. 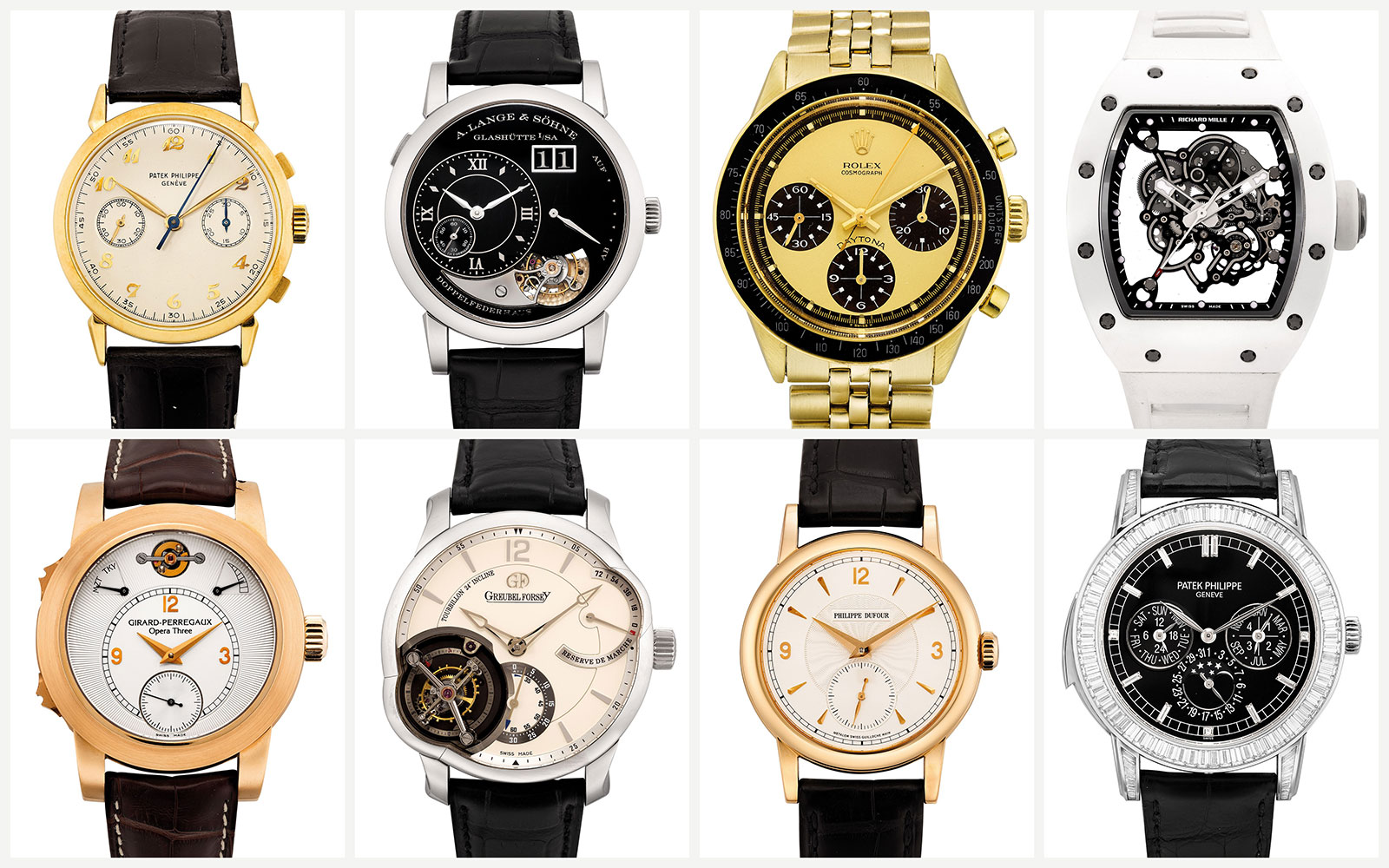 With over 160 lots, the auction includes a strong mix of vintage and modern timepieces typical for a Hong Kong sale. Amongst the top vintage lots are a Patek Philippe ref. 5073P grand complication set with baguette diamonds, a Rolex Daytona ref. 6241 “Lemon”, and an especially striking Patek Philippe ref. 1579 with Breguet numerals. Amongst the modern notables are the very rare (just 20 were made) Lange 1 Tourbillon Handwerkskunst with a black enamel dial, a Philippe Dufour Simplicity in pink gold, as well as a Greubel Forsey from the collection of LVMH watch division boss Jean-Claude Biver. The preview exhibitions start in Singapore and finish in Hong Kong, just before the auction. All previews are open to the public.