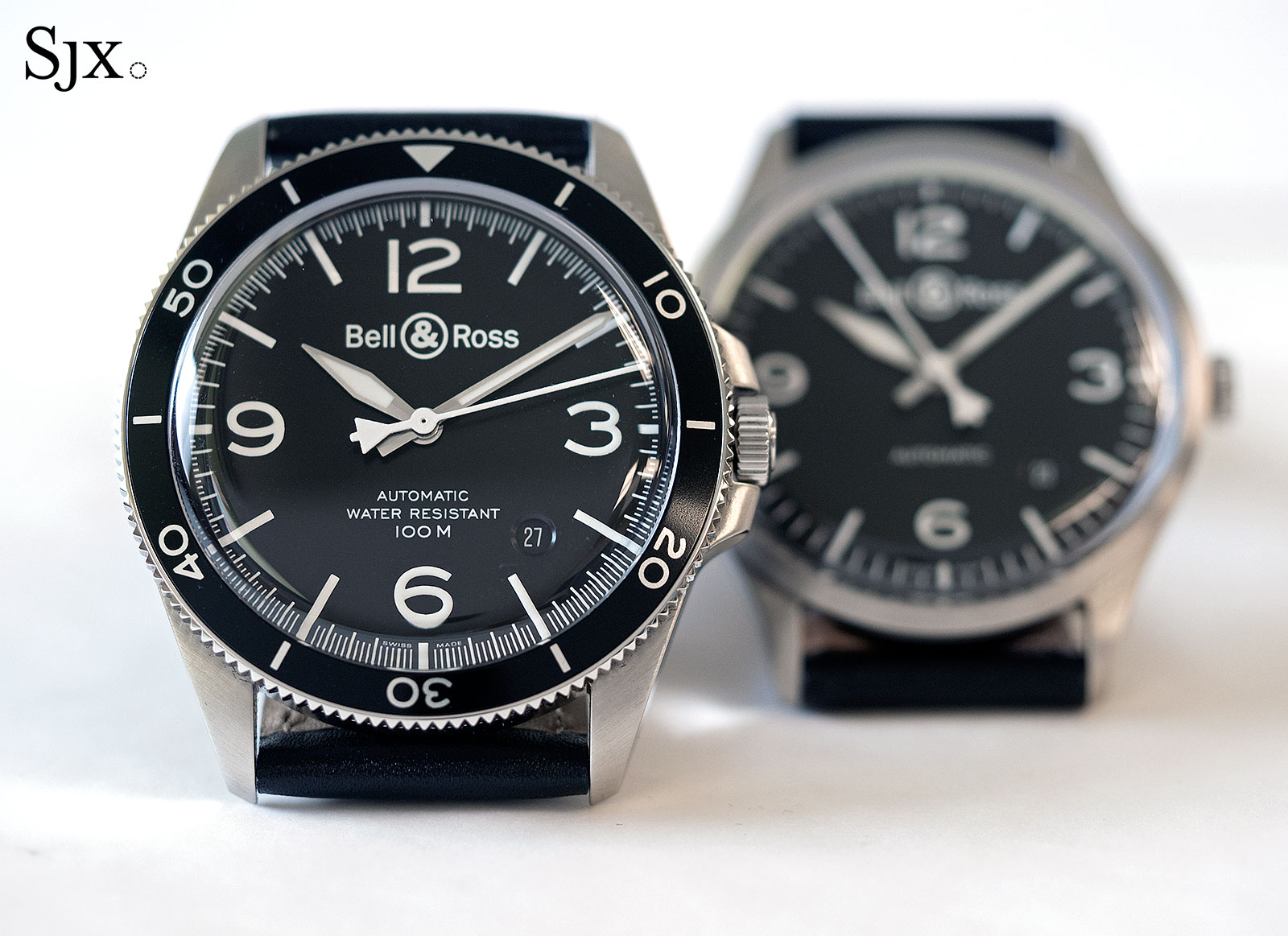 Retro watches are all the rage now, and they mostly fall into two categories: out and out remakes like the Omega Trilogy 1957, and the more loosely vintage-inspired, which includes like the recent Tudor Black Bay Chrono. The Bell & Ross Vintage falls firmly into the latter category, smartly blending various elements, like thin, pointed lugs, for a vintage feel.

From left: The first, second and third generations of the Bell & Ross Vintage

Interestingly, though the latest version of the Vintage is the most retro, the typography on the dial is modern, particularly with the sans serif font for the logo. In contrast, the first generation Vintage featured a serif font similar to those found on watches in the 1960s and 1970s.

The Vintage 3rd Generation is comprised of three watches, with the base model being the BR V1-92 Black Steel, the most affordable and perhaps the most compelling of the trio.

Unlike most military-esque watches the BR V1-92 is slim and almost elegant, just 38.5mm in diameter, giving it an unusual feel. In the hand the case obviously compact, evocative of mid-20th century watches, more so than any of the other watches in the range. That feel comes from the thin case band and small crown, along with the sapphire crystal and press-fit back that are both both domed. The dial is a flat black and functionally laid out, bringing to mind railway station clocks. And it does have a date window that takes away from the appealing minimalism, albeit one minimised to a tiny aperture at four o’clock.

And unfortunately for traditionalists, the BR V1-92 is automatic (powered by the Sellita SW300); a hand-wind movement would have boosted the vintage feel factor and rendered the case thinner. Essentially a bulked up version of the watch above, the BR V2-92 Black Steel feels more modern. The case is 41mm in diameter, slightly thicker and fitted with a bidirectional 60-minute bezel for measuring elapsed time. But not only is it larger, the case is more sturdily built, with a screw-down crown and back. Nonetheless it still preserves most of the retro style elements, most notable the high, domed crystal. The lugs are still narrow and pointed, though the larger case makes them less pronounced than on the smaller BR V1-92. The BR V2-92 is also equipped with the Sellita SW300, but now visible through the screw-down display back. Notably, the BR V2-92 Black Steel costs about a third more than the smaller BR V1-92, no doubt a consequence of the more complex case construction, but will likely have more appeal for those who want a larger, more modern sensation on the wrist.

The top of the line model in the Vintage Third Generation is the BR V2-94 Black Steel, a self-winding chronograph that’s also 41mm with a domed sapphire crystal.

Bell & Ross was set-up only in 1992, leaving it without an archive of designs to fall back on. So the chronograph does inevitably bring to mind watches produced by other marques. But not one specific watch, instead its details are variously reminiscent of the Rolex Daytona and Omega Speedmaster. It’s a handsome, functional style, especially with the “bi-compax” dial layout, which always works better for watches that rely on historical designs. The elapsed 30-minute counter sits at nine o’clock, while the constant seconds is at three. The sub-dials are admirably fuss-free, with the minimum needed for functionality; the constant seconds register, for instance, merely has a crosshair. Interestingly, unlike many retro-style watches, the BR V2-92 works better on the bracelet. With rounded links that are alternately polished and brushed, the bracelet is visually similar to the dinky folded link bracelets of the 1970s, but it is of course solid and weighty as modern bracelets are. (And the bracelet is also available for the BR V2-92.) This is equipped with the ETA 2894, also visible under a display back. The movement is an ETA 2892 with a Dubois-Depraz chronograph module on top, and unlike the calibres inside the simpler Vintage watches, the 2894 has been dressed up. The movement is the top grade offered by ETA, explaining the blued steel screws and simple decorative finishing, which is appropriate given its price. The Vintage 3rd Generation is priced as follows:

They are already available at retailers and boutiques. For more on the Vintage 3rd Generation, visit bellross.com.