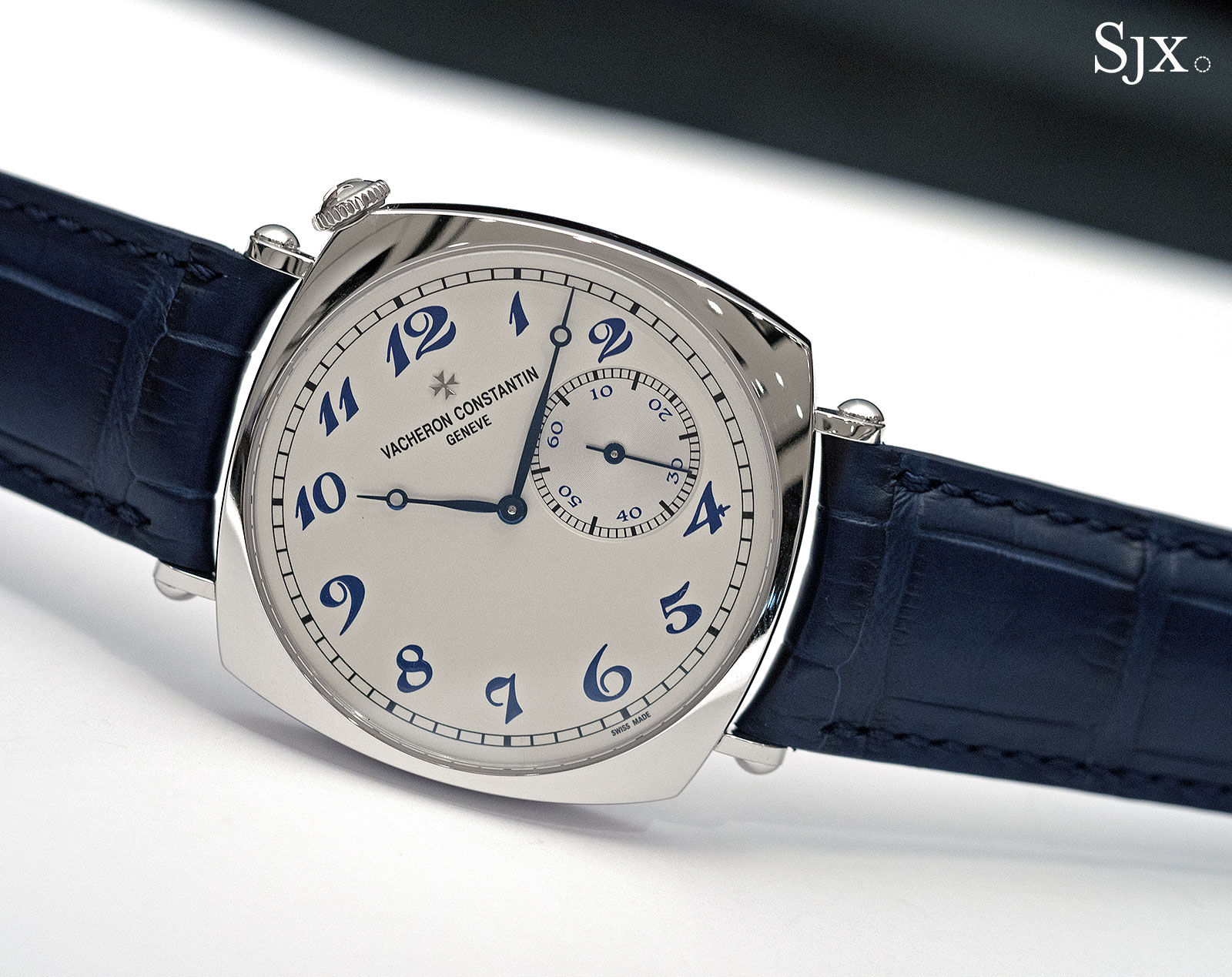 With its angled dial and squarish case, the American 1921 is arguably the most visually distinctive watch made by Vacheron Constantin. Originally introduced in pink and then yellow gold, the 1921 arrived in platinum last year – certainly the best looking amongst them.

Part of the Historiques line – the same range that gave us the Cornes de Vache chronograph – of vintage remakes, the 1921 is a twist on a classic look – Breguet numerals and hands – that’s modelled on several driver’s watches Vacheron Constantin produced in the 1920s for the American market. Positioned 45 degrees from the vertical, the dial is meant to be read with hands on a steering wheel. Because the look is a good one, nothing has changed from the pink gold version to the platinum 1921. While the pink gold version feels retro, the platinum 1921 is more comfortably contemporary in blue and silver livery. While the dial is a finely grained silver, the Breguet hands are blued steel, with the numerals printed in mid-blue lacquer to match. Notably, the font used for the Breguet numerals is taken from 19th century pocket watches, giving the “9” an elegant curve and the “4” a cross at its tip. The font for the sub-seconds is similarly vintage in style. That being said, the font used for “Vacheron Constantin” is sans serif (Arial perhaps?) and feels out of place. Despite the dial being at a 45 degree angle, the sub-seconds at three o’clock is conventionally aligned to the vertical. That’s inexplicable and intuitively incongruent but doesn’t detract from the overall look. A thin 8mm high, the platinum case is 40mm by 40mm, modest by modern standards, but the square shape gives it a larger footprint. The lugs, however, are short, allowing it to fit even on smaller wrists. The density of platinum – it’s almost 50% heavier than 18k gold – gives the 1921 a solid feel, despite its elegant proportions. The sapphire back shows off the cal. 4400, a thin movement that’s found in most of Vacheron Constantin’s larger manually wound watches. It has a 65-hour power reserve with a large balance and smallish balance wheel – a construction that’s often found in movements produced by brands owned by Richemont (which also owns IWC and Panerai amongst others).

Most of the movement is covered by two large bridges and a wide balance cock. A traditional movement layout with separate cocks for the gear train would have been more suited to the design of the watch. Like all mechanical Vacheron Constantin movements, the cal. 4400 has the Poincon de Geneve, or the Geneva Seal. Consequently the decorative finishing is attractive and careful, with all bases covered. The finishing is not quite artisanal to the degree of Voutilainen or Laurent Ferrier, but attractive nonetheless. The biggest weakness of the 1921 in platinum is shared by the gold versions of the same – a significant price premium over comparable watches. A 42mm Patrimony hand-wind in platinum that has the exact same movement costs almost a quarter less than the 1921, despite being highly substitutable in terms of tangible qualities. That disparity is tough to explain based on cost of production, but the 1921 is infinitely more appealing and interesting than a Patrimony so the comparison is unfair. A 1920s original from the Vacheron Constantin museum

Vacheron Constantin's patented world time now has a more contemporary look with the new Traditionnelle World Time featuring a gold world map. Here's a look at this watch for the well heeled traveller, with photos and pricing.