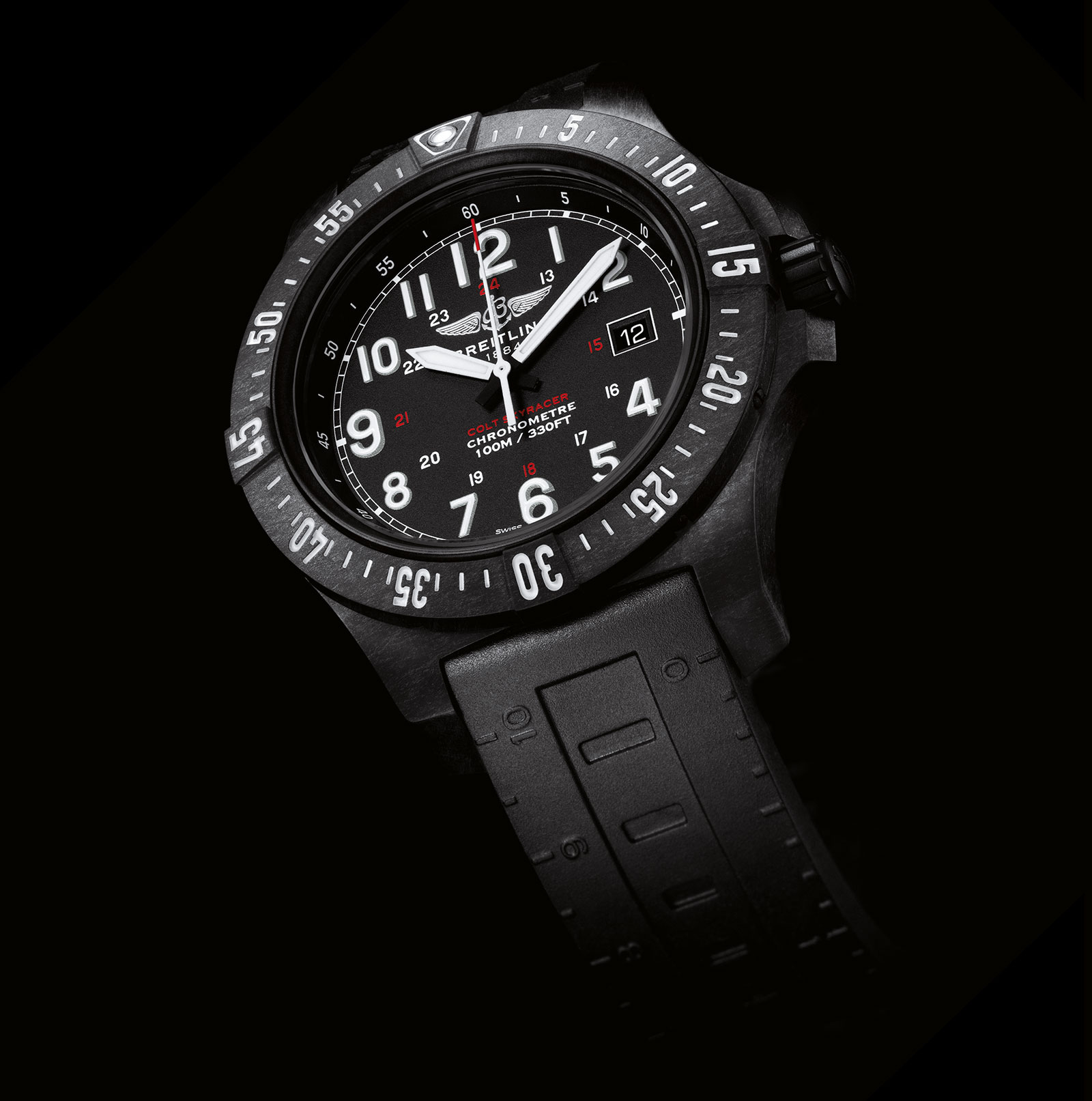 The Colt has always been one of the basic watches in the Breitling line-up, but available only in steel. Now it’s been given a makeover: the Colt Skyracer is lighter, cheaper and more military-esque – and also SuperQuartz. The new look amplifies elements traditionally found on military watches, with large Arabic numerals in a shadowed font, a 24-hour scale, along with red accents on the dial.

Despite being the entry-level model, the Colt Skyracer boasts an unusual case material: Breitlight. It’s a carbon composite that leaves the large 45mm case lighter than it looks. The black and grey marbled surface of the material is due to its composition, which is carbon fibre strands mixed inside a hardened polymer. The Colt Skyracer is powered by the SuperQuartz cal. 74 , a top of the line quartz movement made by ETA. It’s from the ETA Thermoline family of movements, which are equipped with a sensor that measures the temperature of the quartz oscillator, allowing the movement to digitally adjust its rate to compensate for rate variations due to fluctuations in temperature. Consequently, a SuperQuartz movement keeps time to within 15 seconds a year, compared to the 15 seconds a month of ordinary quartz movements. A feature that is unique to the Colt Skyracer is the easily removable rubber strap that latches onto bars integrated into the lugs.  Once separated from the case, the strap doubles up as a ruler thanks to measuring scales on each side of the strap. Priced at US$2000 or S$2850, the Breitling Colt Skyracer will reach Breitling boutiques and retailers at end June 2017.

Additionally, the Colt Skyracer makes its Singapore debut at a pop-up store in VivoCity that takes place from June 27 to July 2. Open from 10:00am to 9:00pm daily, the pop-up store will be located at Central Court B of the mall. 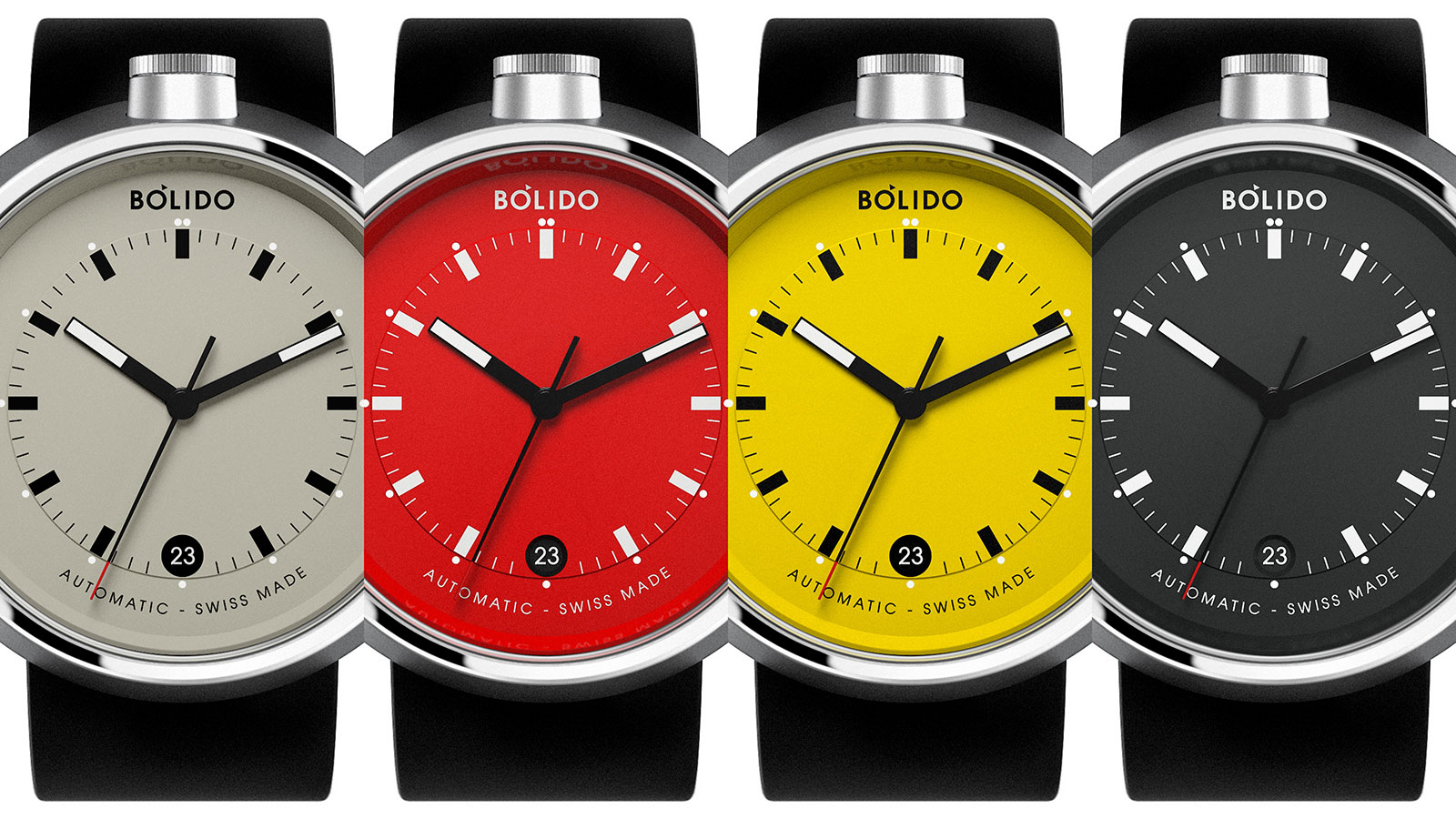 Priced at just over US$400 for early backers, the Bólido is the result of a collaboration between Pierre Nobs and Simon Husslein. Given the pair’s backgrounds – Nobs founded Ventura and Husslein designed watches for it – the Bólido unsurprisingly combines strong aesthetics with a solidly constructed monocoque case.

Unlike the average Kickstarter wristwatch, the team behind Bólido has a significant track record in the business. Nobs founded Ventura in 1989, turning it into a design star of the 1990s by recruiting noted European industrial designers, most prominently Hannes Wettstein and Flemming Bo Hansen, to style its minimalist watches, which also boasted hardened titanium or steel cases, a remarkably unusual combination at the time. The first Ventura wristwatch, a digital timepiece designed by Hansen, ended up in the permanent collection of MoMA in New York.

But an early 2000s push into more advanced digital watches along with a change in ownership did not go well, and Ventura went bankrupt several times. Now Nobs has teamed up with Husslein, who once worked at Hannes Wettstein’s design studio penning watches for Nomos and Braun, to create a watch that’s slightly reminiscent of Ventura but significantly more affordable. The one-piece case of the Bólido is 43mm in diameter with the face sitting slightly angled towards the wearer for better legibility,with the case is thicker at 12 o’clock than it is at six o’clock. Made of stainless steel, the case is one-piece, with the movement and dial installed from the front. The simple construction as well as streamlined manufacturing – it’s made with CNC machines that machine and finish the surface simultaneously – lower the cost of production. Both crystals on the front and back are sapphire, with the rear revealing the ETA 2824 inside. Plain and functional, the dial is designed for easy reading. Five colours are available: grey, red, yellow, black and white. The Bolido is delivered on a rubber strap. The Bolido costs US$430 for a single watch, with orders of multiple watches bringing the price down to US$390. Deliveries are expected in September 2017. It is available on Kickstarter, with the project already having raised almost twice the target.

In the future, the Bolido will retail for US$650 in white or black, and US$690 for all other colours.