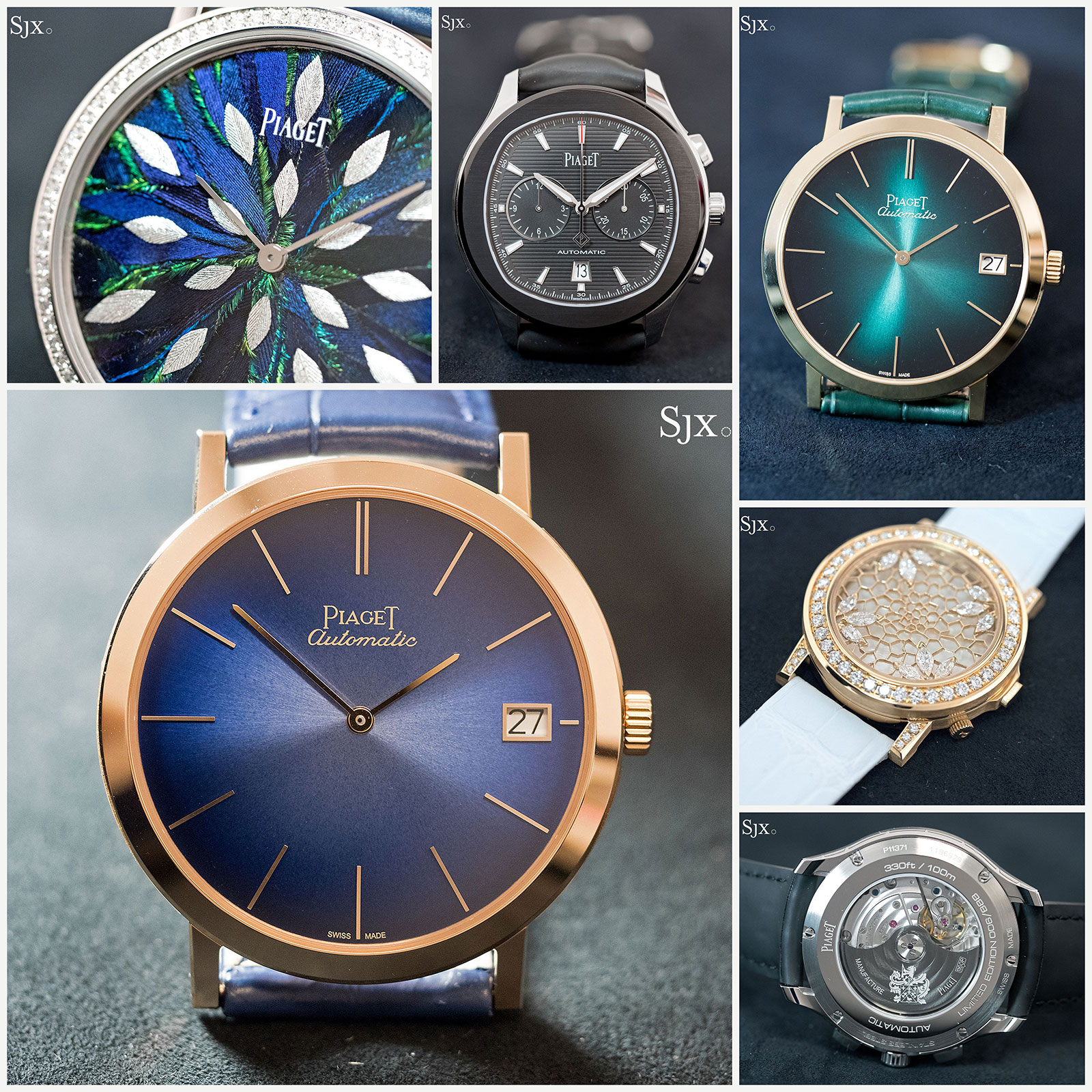 The best known of Piaget‘s timepieces are its extra-thin wristwatches that come in all shapes and sizes, with the round Altiplano being most quintessential. Named after the Altiplano plains in South American, the Altiplano is the centrepiece of Piaget’s SIHH 2017 line-up that was relatively compact, perhaps a result of its chief executive’s retirement that was announced just after the fair.

Piaget’s very first extra-thin wristwatch made its debut in 1957 (though the Altiplano label came much more recently) and was characterised by plain dial featuring baton markers and hands, the generic look for a slim dress watch of that era. Now the same classic style is found on all Altiplano 60th Anniversary models, including the pair of white gold limited editions with blue dials that were previewed before SIHH.

The rest of the Altiplano 60th Anniversary watches fall into two size categories: 40mm watches for men and smaller 34mm or 38mm watches for women.

Three variants of the Altiplano 60th Anniversary 40mm are available, grey, blue and green – each limited to 260 pieces. The blue and green and paired with pink gold cases, while the grey is matched with white gold.

While the colours differ, the dials share a radially brushed finish with a bright and nuanced metallic colour, with the green and blue being particularly striking. While the grey dial is more muted – it’s actually a blend of brown and grey – the colour is subtle and unusual. While the dial design is simple, even elegant, an indiscreet date window at three o’clock looks out of place. The basic Altiplano 60th Anniversary 34mm is available only in one colour, a vivid reddish-pink with a metallic finish, but in two versions.

The first is white gold with a plain case, while the second is set with 72 brilliant-cut diamonds. Each version is limited to 360 pieces. Both are powered by the hand-wound calibre 430P, a movement just 2.1mm high that’s hidden under a solid case back. And the ladies’ Altiplano is also available as the Altiplano 34mm with the dial covered by a thin slice of turquoise or opal, harking back to the semiprecious stone dials that were all the rage in the 1970s and 1980s. While the turquoise version has an 18k white gold case, the opal dial model is pink gold. Both, however, are set with 72 brilliant-cut diamonds on the bezel and have the calibre 430P inside. The last of the ladies’ anniversary Altiplanos is the Altiplano 900P in pink gold. Essentially a feminine version of the men’s 900P, this has a dial, or more specifically the chapter ring for the hours, made of 18k pink gold.

Measuring just 3.65mm high, the Altiplano 900P is the thinnest mechanical watch on the market, a feat made possible by mounting the parts of the movement directly on the case back, which doubles up as a movement plate. On this edition the visible screws have been plated in pink gold to match the dial and case, while the bridges have a frosted finish. The flagship of the Altiplano 60th Anniversary collection is the Altiplano Tourbillon High Jewellery, a large but thin watch with a vitreous enamel dial.

Arranging asymmetrically, the dial has the time is displayed on a sub-dial at eight o’clock, while the flying tourbillon is inside an aperture at two o’clock. Made of a solid gold disc decorated with radial engine-turning, the dial is finished with translucent greyish-blue enamel in a technique known as flinque. Inside is the calibre 670P, a hand-wound movement measuring 4.6mm high, making it one of the thinnest tourbillon calibres on the market. Made by French craftswoman Emilie Moutard-Martin, the dial is composed of tiny slices of peacock, duck and rooster feathers, some of which have been covered in silver leaf for highlights. The feathers are first selected, washed, steamed and cut, before being carefully arranged by hand on the dial. The white gold case is set with 72 brilliant-cut diamonds on the bezel, with the hand-wound calibre 430P inside.

The Altiplano Feather Marquetry 38mm is limited to 38 pieces, with the price yet to be announced.

The Altiplano Double Jeu Lacework is another version of the Altiplano with a hinged lid that serves as a canvas for decoration. This time the lid features a skeletonised grid inspired by fabric lacework, set with diamonds on the lid and bezel, protected by sapphire crystals on both sides. Opened via the button in the case at three 0’clock (the crown at four is for winding and setting), the lid is the work of independent French jeweller Sara Bran, a specialist in open-worked gold jewellery who also created a gold cuff in the same style as the watch. Under the lid sits the watch dial, which is white mother of pearl. Even with the lid closed the time is visible through the gold lacework. Equipped with the 430P movement, the 38mm case is pink gold, and somewhat thick because of the hinged lid.

Available as a chronograph or automatic with date, the Polo S ADLC shares exactly the same specs as the equivalents in the regular collection. The case remains 42mm in diameter, though the black bezel makes it seem slightly smaller. While the original Polo S came on a steel bracelet, the Polo S ADLC is fitted with a rubber strap. Both versions of the Polo S ADLC are limited to 888 pieces each. Prices are unavailable but each costs about 5% less than the regular production model on a steel bracelet. So expect prices to be about US$9000 for the automatic and US$12,000 for the chronograph.