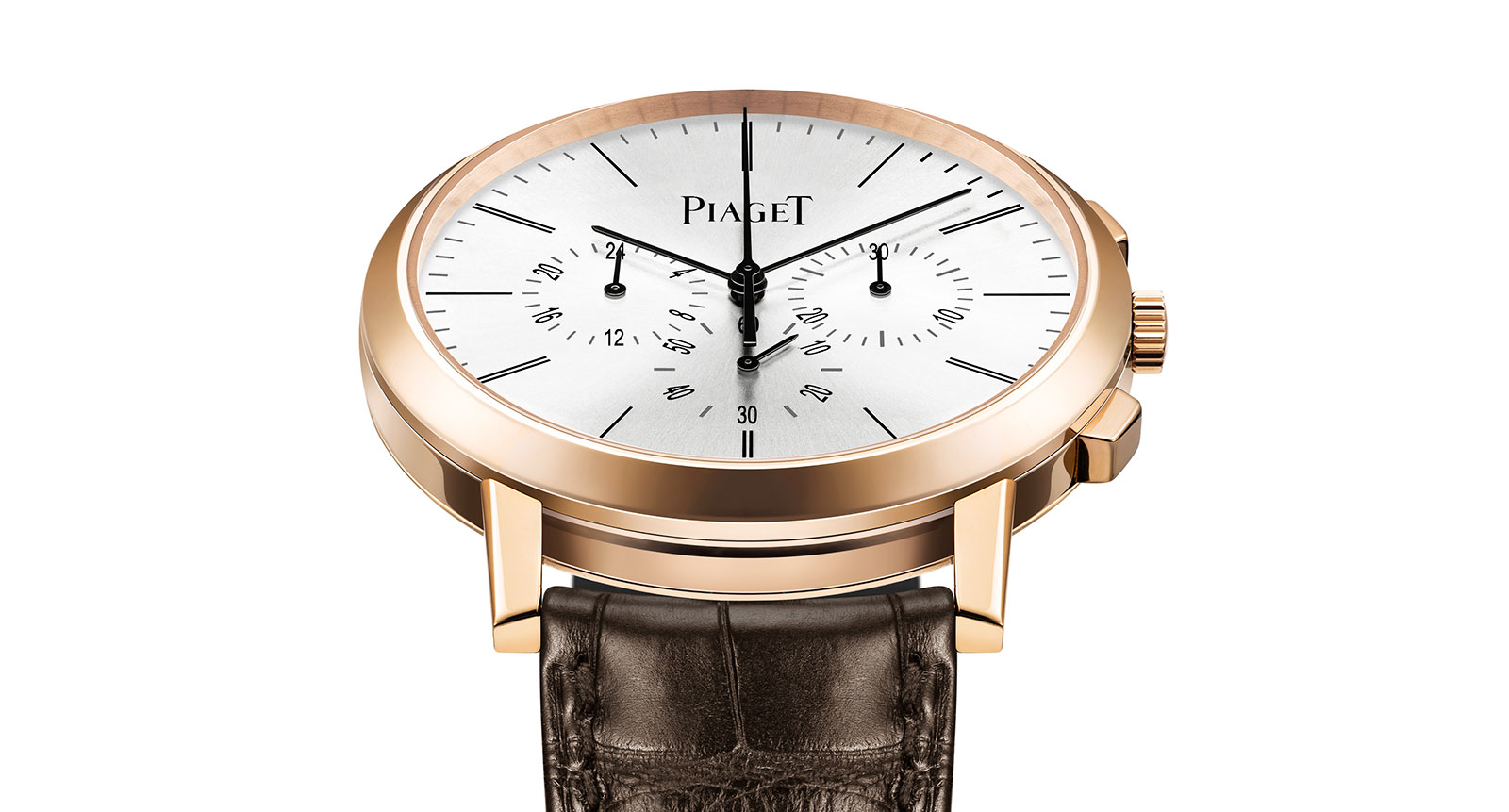 For several years now Piaget has endeavoured to create one ultra-thin watch after another, last year’s Altiplano 900P is the thinnest watch on the market. Next year at SIHH 2015 Piaget will officially unveil the Altiplano Chronograph. Just 8.24 mm high – the movement inside is only 4.65 mm thick – the Altiplano Chronograph is the thinnest chronograph on the market. The dial is clean and concise in a style typical of the Altiplano line. Three registers occupy three, six and nine o’clock, but only two are for the chronograph. The counter at nine o’clock is actually a 24 hour display for the second time zone.

Hand-wound with a 50 hour power reserve, the calibre 883P inside has a flyback, or instantaneous reset, function. And like practically all modern chronograph movements, it features a column wheel and vertical clutch. Judging by the architecture of the chronograph, Piaget had some help from its friends in developing the 883P. The movement architecture  is strikingly similar to the Jaeger-LeCoultre calibre 750/751, itself heavily inspired by the Frederic Piguet calibre 1180.  Developed in the mid-eighties, the Piguet 1180 was revolutionary for its time, and obviously still continues to inspire chronograph construction today. And the Piguet 1180 is just under 4 mm thick, making it slimmer than the 4.65 mm high Piaget 883P.

What makes the 883P unique relative to other modern chronograph calibres is its slimness – each component has been thinned out as far as possible. The chronograph levers are just 0.06 mm high, while the column wheel is 0.95 mm. Even the balance cock has been reduced, as illustrated by the close-up image below. The Altiplano Chronograph is available in two variants for now: rose gold or white gold with a diamond bezel, priced at 40,000 and 59,000 Singapore dollars respectively. Pre-SIHH 2015: Vacheron Constantin Marks The Chinese Zodiac Year Of The Goat (With Specs And Price)

At SIHH 2015 Ralph Lauren will add the Automotive Chronograph to its signature line of burl wood dial timepieces inspired by the Bugatti 57SC Atlantic Coupe.