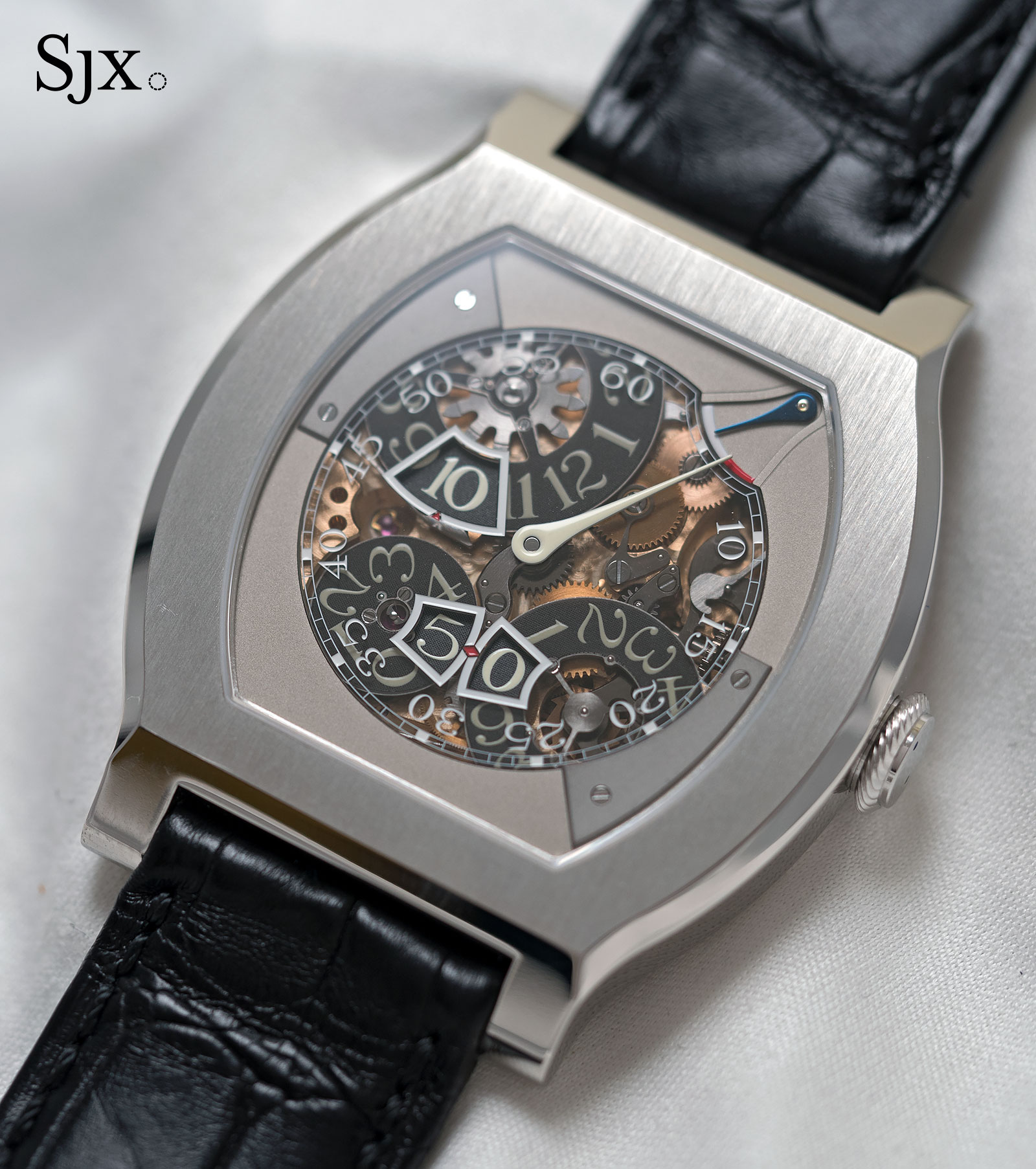 Only just introduced while SIHH 2017 takes place in Geneva, the F.P. Journe Vagabondage III is a world’s first, featuring both a jumping hours and digital jumping seconds, a well as a remontoir d’egalite.

According to François-Paul Journe himself, this complication has never been done in either pocket or wristwatches. And despite the complexity of the movement, F.P. Journe managed to keep the watch compact and slim. The Vagabondage III is undoubtedly one of the most notable watches in the alternative time display segment, and despite it still being early in the year, probably one of the highlights of the 2017. The Vagabondage III is the third in a series of identically shaped wristwatch with unusual time displays, which began with the Carpe Diem wristwatch of 1997. A unique piece created for a Parisian collector named Jean Aube who wanted a novel time display, the Carpe Diem had a round, gold case, a silvered, guilloche dial, along with a wandering hours display and the balance wheel exposed on the dial. Though self-winding and powered by a custom movement built by Mr Journe, the Carpe Diem was centred on the same concept found in the later Vagabondage I.

As the story goes, Cartier soon expressed interest a series of watches with a similar time display – purportedly housed in a Tortue watch case – no doubt for the launch of the Collection Privee Cartier Paris that would take place in 1998. But the project fell through, leaving Mr Journe to eventually produce the watch under his own brand, while retaining the case shaped like a tortue, or tortoise. The result was the Vagabondage I, which told the time with a wandering jump hour display that circled round an exposed balance wheel in the centre of the dial, just like the Carpe Diem.

Launched in 2003, the Vagabondage I was inaugurated by three one-off examples in white, rose and yellow gold for Antiquorum’s 30th anniversary auction in April 2004, sold to benefit a French charity. Beside the case material, the trio made for Antiquorum were also distinguished by their movements with brass bridges and plates.

The serial production Vagabondage I was initially planed as a limited edition of 66 watches in platinum, but at a client’s request Mr Journe increased the number to 69. The edition include five made for Sincere Watch that featured the Singapore retailer’s logo on the dial. Like all other F.P. Journe watches, these had movements with bridges and base plates in 18k red gold. In 2010 F.P. Journe unveiled the second watch in the series, the Vagabondage II, which was shaped exactly like its predecessor but larger in size. This indicated the hours and minutes with jumping discs, and the seconds on a conventional sub-dial, with all the displays arranged linearly. A remontoir d’egalite, or constant force mechanism, was installed in the movement to manage the energy needed to rotate the jumping discs. This was a limited edition of 69 in platinum and 68 in red gold.

F.P. Journe hinted at the watch in December 2016, and then finally took the covers off just a few days ago. The Vagabondage III is the concluding chapter in the series, and the most complicated of the trio, with its most notable complication being the jumping digital seconds.

The Vagabondage III, or V III for short, is almost exactly the same size as the V II. The case measures 37.6mm wide and 45.2mm long, making it a fraction of a millimetre wider and longer than the V II. But it is slimmer than its predecessor, standing just 7.84mm tall, leaving it concise and elegant on the wrist. Visually the V III is the most contemporary of the Vagabondage series, particular with the asymmetrical design. There are echoes of the similarly shaped (and quartz) Elegante 48 in the chapter ring and bridges screwed onto the dial at four and ten o’clock. The dial is faintly tinted clear sapphire, with most of the mechanism visible below it. White framed windows highlight the time, rendering it extremely legible; the windows are not printed, they are engraved and filled with white lacquer, as is the minute track. Interestingly the discs for the hours and minutes are a dark grey, perhaps even black, but covered with a fine crosshatch pattern in a pale colour, which leaves them looking a medium grey. The V III is thin watch, remarkably slim considering its complications. At just 7.84mm high, the V III is actually thinner than the Audemars Piguet Royal Oak Extra-Thin ref. 15202 that is 8.1mm. But the style of the case, especially the wide, flat bezel, make it seem slightly larger. And the uncommon shape and display further improve its wrist presence. While the red gold version is distinctly striking due to the colour, the platinum model has a reassuring heft. The hand-wound calibre 1514 inside the V III has three complications: jumping hours, jumping seconds, and a power reserve display. Despite the fact that it is a time-only watch with power reserve, the V III movement is made up of 249 parts. In comparison, the Patek Philippe  calibre 240Q self-winding perpetual calendar movement is 275 components. The high part count is primarily a consequence of the complex time display. Hours are shown in a window at nine o’clock, with the jumping disc being driven by the gears of minute hand in the centre. Harry Winston did something similar with the Opus 3, which was conceived by Vianney Halter and then completed a decade later by Renaud Papi, that featured a jumping seconds countdown for the last four seconds of each minute. The Vagabondage, on the other hand, has a jumping seconds every second. This addition was to prevent timekeeping from suffering each time the seconds discs jumped, by maintaining a constant amplitude in the balance wheel, or in other words, keeping the balance wheel oscillating in the same manner.

Newly developed but operating on similar principles as the remontoir Mr Journe invented for his signature tourbillon wristwatch, the constant force mechanism in the V III relies on a long, straight blade spring, capturing and releasing a tiny amount of energy every second, just enough to move the seconds disc. The lever of the remontoir Despite the energy intensive time display, the V III manages a respectable 40-hour autonomy when its single barrel is fully wound, indicated by a small power reserve display at one o’clock. This contrasts with the 30-hours or so of the V II. The Lange Zeitwerk has a 36-hour power reserve, while the Harry Winston Opus 3 is 35 hours, at least officially. The key novelty of the V III – the compelling manner in which it tells the time – is also its weakness. Because the hours disc and minute hand are driven by one set of gears, they move in sync. So when the minute hand crosses the 12 o’clock mark, the hours disc advances alongside.

But because the seconds disc is driven by its own set of gears, which includes the remontoir, it moves independent of the minutes. Consequently when the seconds show the top of the minute, or “00” in other words, the minute hand might not be on a minute hashmark. Deft adjustment via the crown is needed to get them in sync, which complicates precise setting of the time. The movement design and layout is typical of F.P. Journe, with an orderly and sensible aesthetic that’s reminiscent of the calibres inside the Chronometre Souverain and Chronometre Optimum.

As is usual for the brand, the base plate and bridges of the movements are 18k red gold. A large main bridge holds the barrel, which is visible at 12 o’clock. The movement decoration is also typical of F.P. Journe, which is to say it is careful and attractive but mostly mechanically applied. According to F.P. Journe, owners of the V II will have priority in acquiring a V III with the same metal and serial number.

The final chapter in the F.P. Journe jumping time display series is the best yet, with a first of its kind complication.