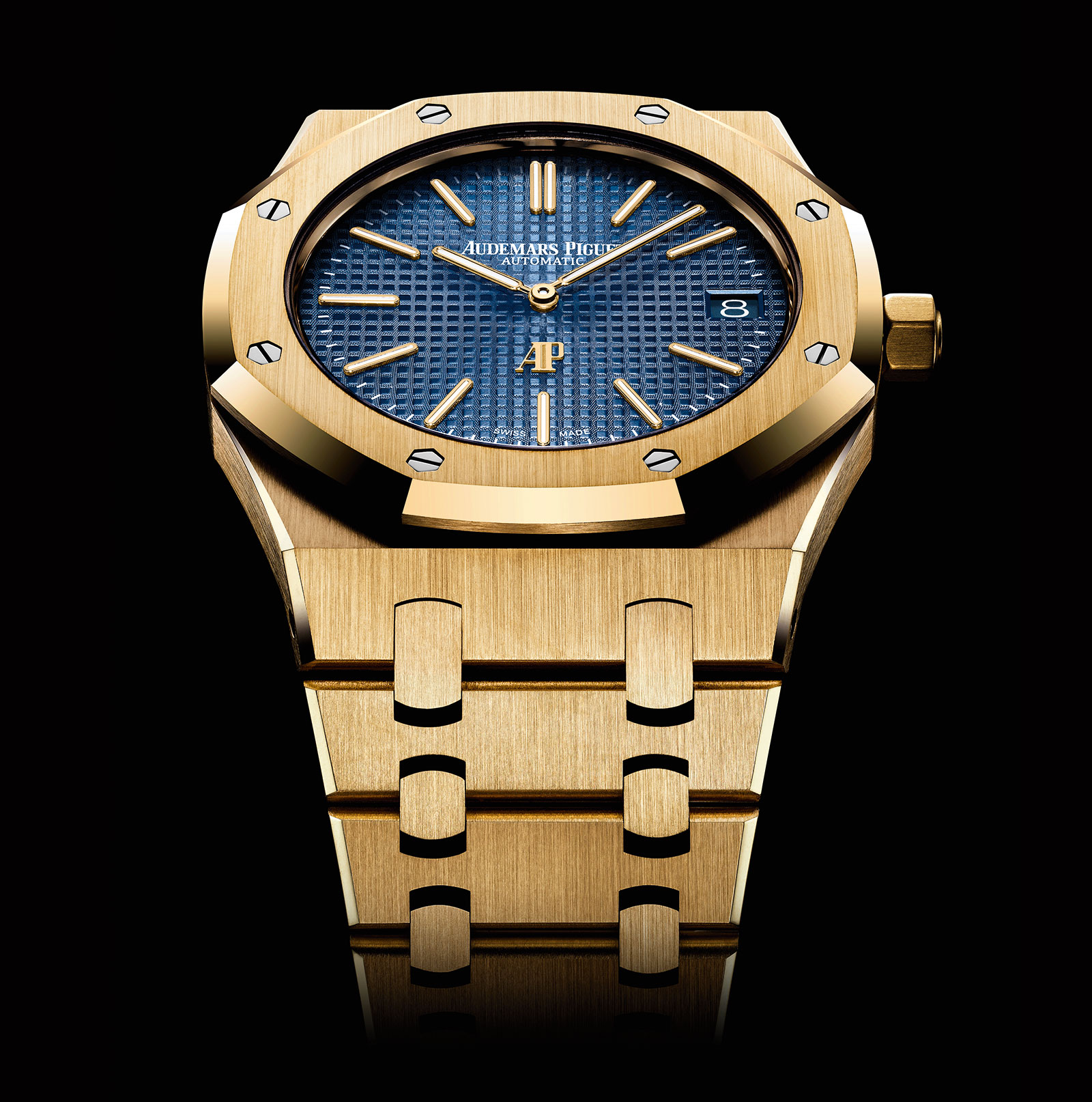 Last year Audemars Piguet unveiled a slew of Royal Oak watches in yellow gold, with a notable omission, the Royal Oak Extra-Thin “Jumbo”. As the Royal Oak marks the 40th anniversary of the first yellow gold model of 1977, that has now been rectified with a pair that will make their debut at SIHH 2017.

The new Royal Oak Extra-Thin watches in 18k yellow gold join the 50-piece limited edition made for Singapore retailer The Hour Glass last year, with both the case and bracelet in yellow gold. While the version for The Hour Glass had a green dial, the two new additions to the collection are in dark blue and yellow gold respectively. Both dials are finished in the traditional style of the Royal Oak, decorated with Petite Tapisserie guilloche and featuring yellow gold applied markers and hands. The case diameter is 39mm, the exact same diameter as the 1977 original “Jumbo”, though the sapphire display back means the modern iteration is slightly thicker than the solid back original.

But the movement inside remains the 2121, the slim, self-winding calibre originally developed by Jaeger-LeCoultre but now made by Audemars Piguet. 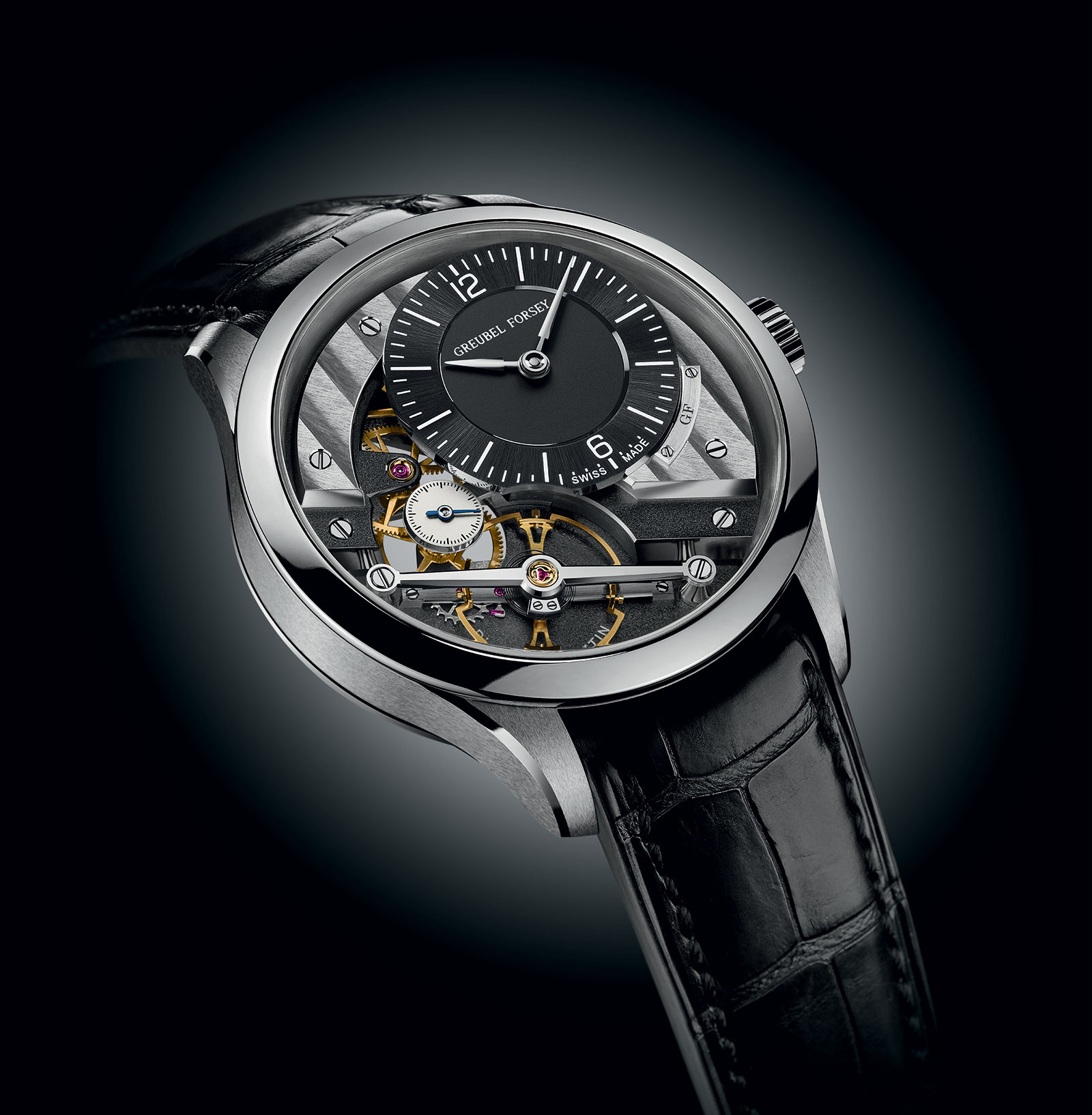 First introduced in stainless steel and then gold last year, the Signature 1 is Greubel Forsey‘s most accessibly priced wristwatch, showing only the time, with no other complications. Now the Signature 1 gets a bit more luxe, with the third and final version in platinum making its debut at SIHH 2017.

Mechanically identical to the earlier versions of the watch, the platinum Signature 1 is hand-wound, with an oversized balance visible at eight o’clock on the dial, held aloft by a long steel bridge. What sets the platinum version apart is the colour of the dial, which is a dark grey with white markings. Despite being a simple timepiece, the Signature 1 is executed elaborately and expensively. The hour and minute hands, for instance, are polished steel with hand-finished countersinks in the centre. On the back (the identical movement inside the stainless steel version is shown below), the movement is similarly treated with lavish attention to detail. Smaller than the average Greubel Forsey but still sizeable, the platinum case is 41.4mm in diameter and 11.7mm high. 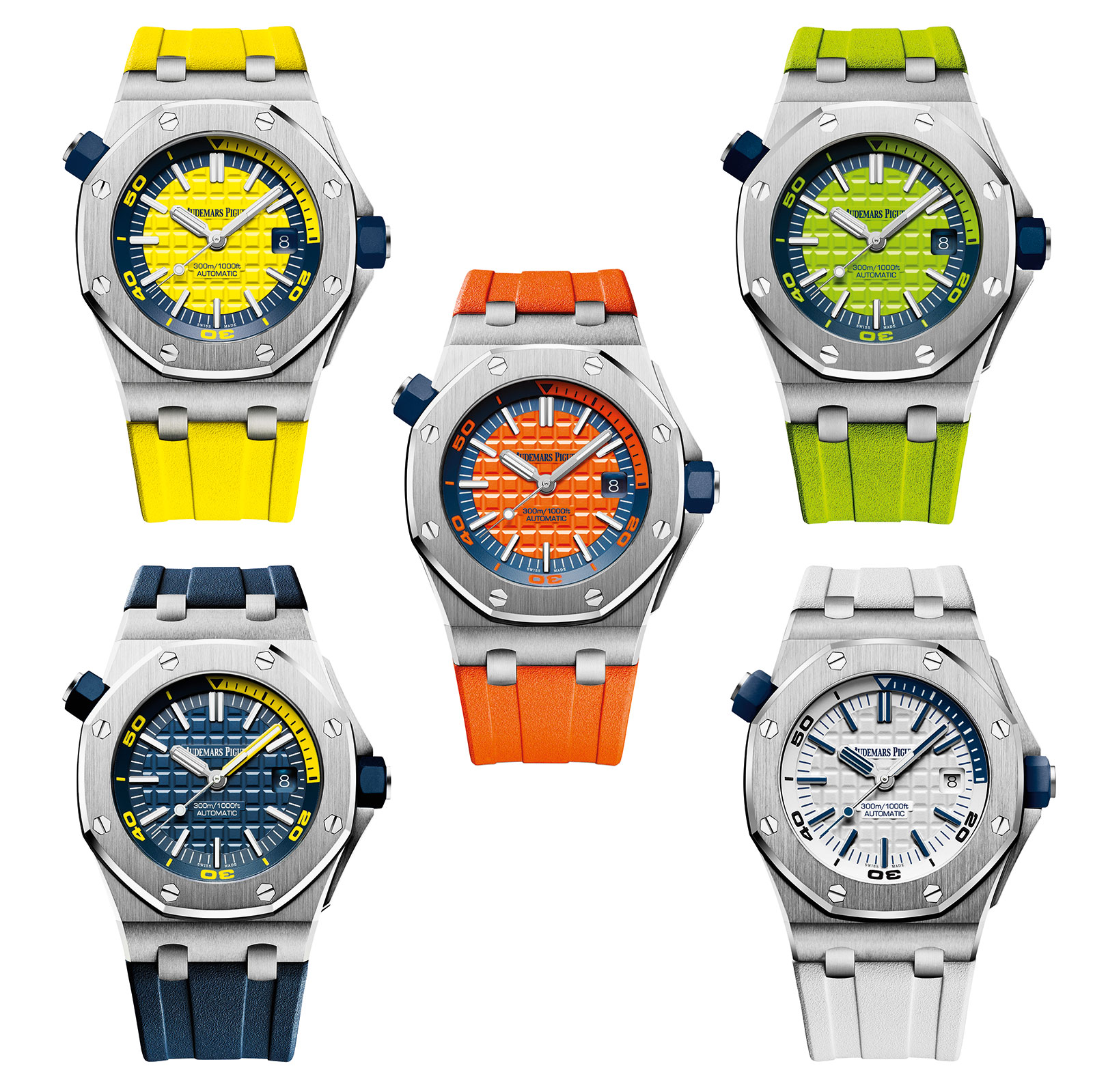 One of a dozen new Royal Oak models to be unveiled at SIHH 2017 tomorrow, the Royal Oak Offshore Diver “Funky Colour” is available in five different colours: white, blue, yellow, orange and green. Each dial colour has dark blue accents to match. The dials are decorated with the chequerboard Méga Tapisserie guilloche that’s standard for the Royal Oak Offshore.

Colours aside the new Offshore Diver is identical to the previous models. The steel case is 42mm in diameter and rated to 300m, with the crown at 10 o’clock to rotate the inner elapsed time bezel around the dial. And it’s powered by the calibre 3120, AP’s in-house automatic movement. The Offshore Diver “Funky Colour” is delivered with two rubber straps, one to match the dial colour, and another in dark blue.

AP has yet to reveal pricing and availability, but with the earlier versions of the same retailing for US$19,000, expect this to be similarly priced.

Individual model references are as follows: 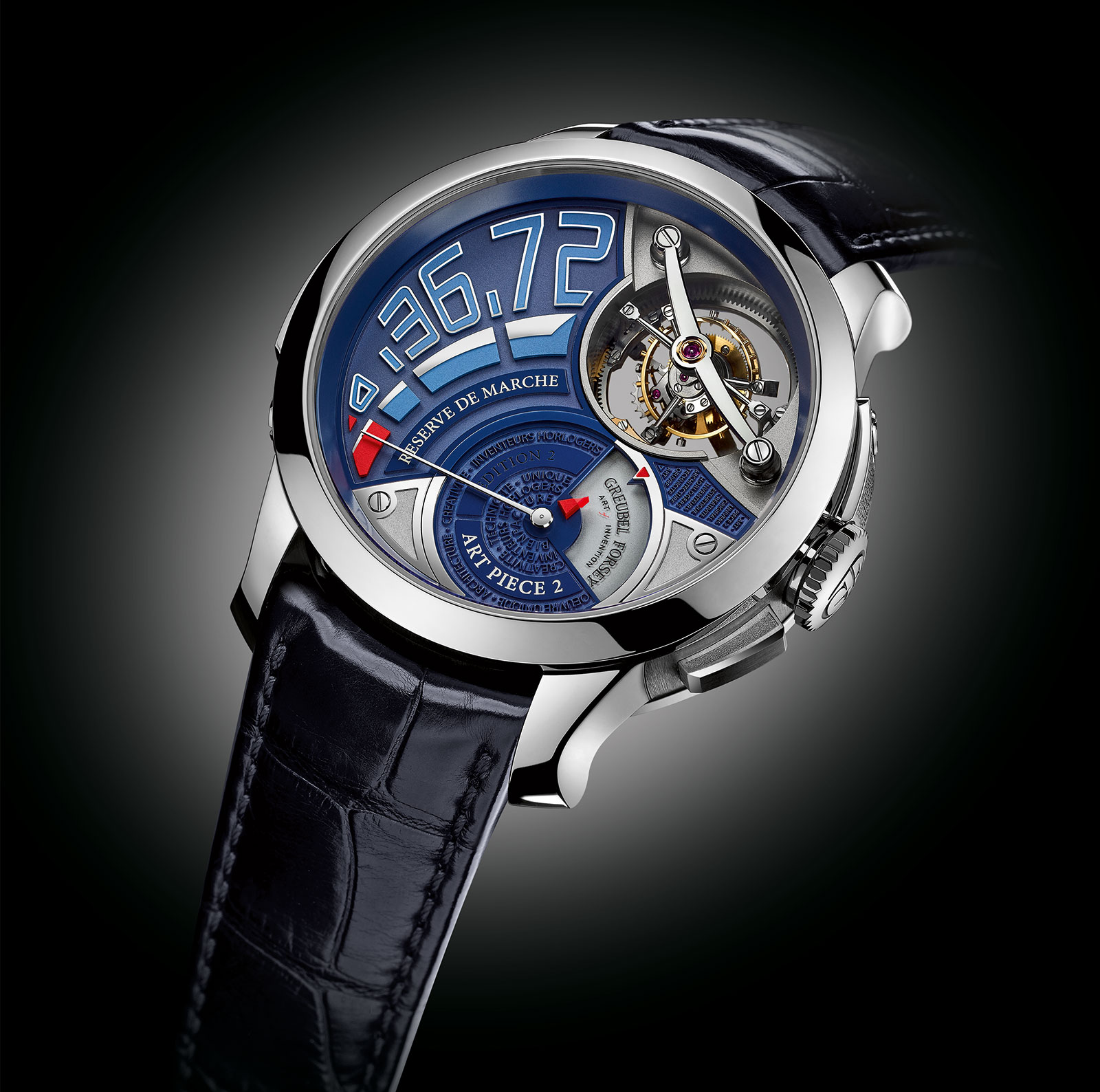 Conceived as objet d’art for the wrist, Greubel Forsey‘s Art Piece watches have tended to be platforms for philosophical statements. The latest in the series is meant to be a memento mori of sorts, one that shows the time only on demand, with the dial being dominated by an extra-large power reserve display instead.

A pusher on the case opens a opens a fan-shaped window at four o’clock, revealing two discs below showing the hours and minutes.

That’s almost an afterthought, with the large power reserve display that sweeps across the left of the dial taking up most of the real estate. According to Greubel Forsey, the purpose of the jumbo power reserve display is to “[alter] our relationship with temporality: it is not the current time that we contemplate, but the time remaining.” Typical of Greubel Forsey, the dial is elaborate and expensively made, being solid gold with a blue coating, and finished with applied gold plates and numerals. Surrounding the time display window is the tiny relief lettering that’s a favourite feature of the brand. This is the first watch in the Art Piece series to lack an optical magnifier – the earlier editions featured micro sculptures viewed through a lens – but is still equipped with the Double Tourbillon 30° that is found on all Art Pieces. Featuring two cages, the double tourbillon rotates on two axes, one requiring a minute to complete a revolution and the other four minutes. Neither has been announced, but with the first Art Piece 2 priced at SFr590,000 expect this to be in the same ballpark. 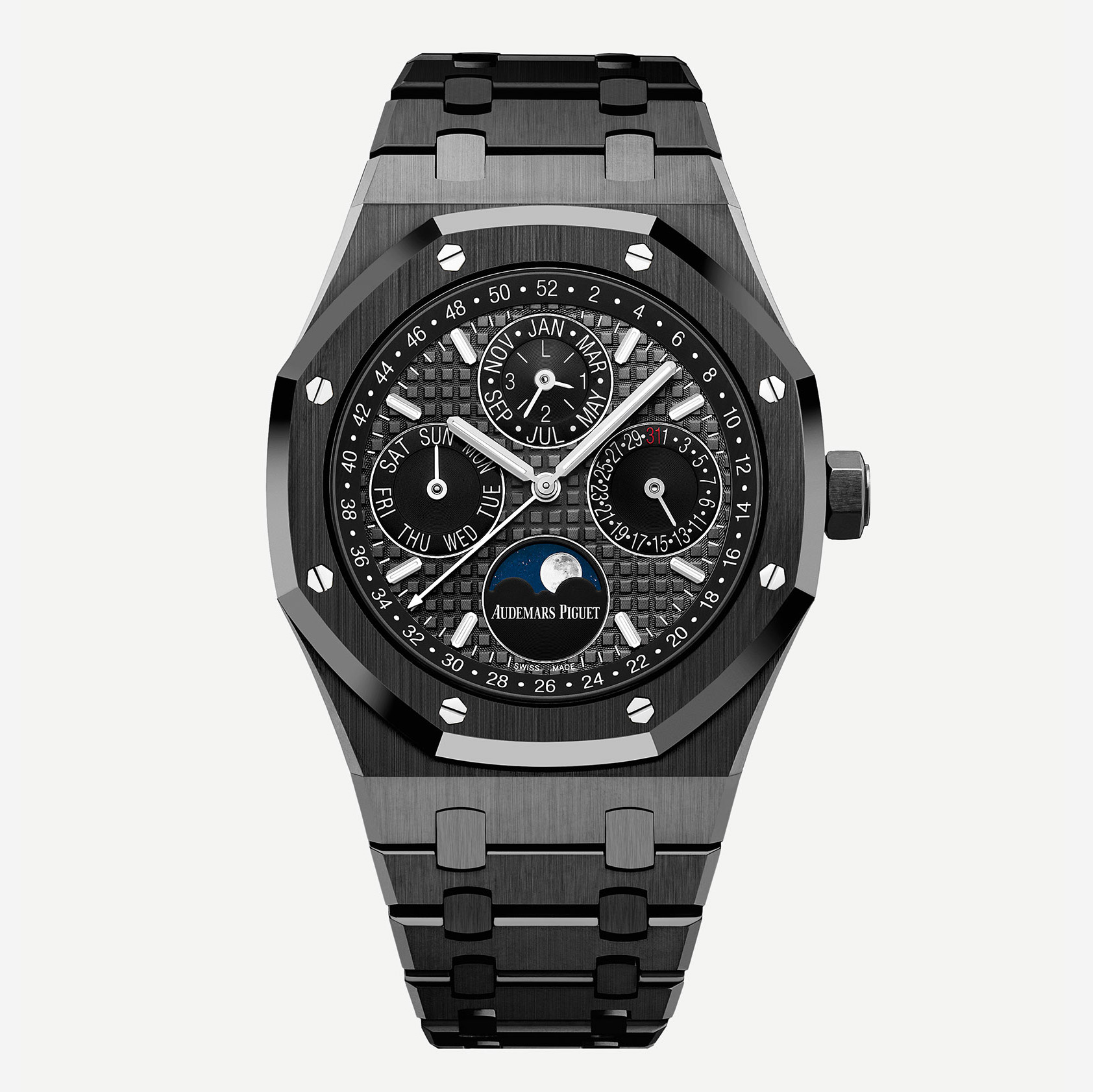 While ceramic has been a favourite material at Audemars Piguet for the Royal Oak, it has not been used for a watch bracelet, until now. Just announced at SIHH 2017, the Royal Oak Perpetual Calendar is ceramic from end to end, with the case, bezel and every link of the bracelet in black ceramic.

The case is 41mm in diameter, just like the standard model, but the finishing of the case and bracelet takes significantly more time than for the steel or gold equivalent. While a steel model takes some six hours to machine, polish and put together, the ceramic version takes 30 hours.

To match the ceramic case, the dial is a dark grey with black sub-dials, decorated with the chequerboard grande tapisserie guilloche that’s synonymous with the Royal Oak. Historically an important complication for Audemars Piguet, the ceramic perpetual calendar is powered by the calibre 5134, a movement based on the extra-thin calibre 2120/2121 found in the original Royal Oak of 1972.

In fact, the calibre 5134 is evolved from the calibre 2120/2802, the movement used for the 39mm Royal Oak perpetual calendar that was in production for some 30 years. The key difference in the new calibre being the addition of a 52 week indicator.