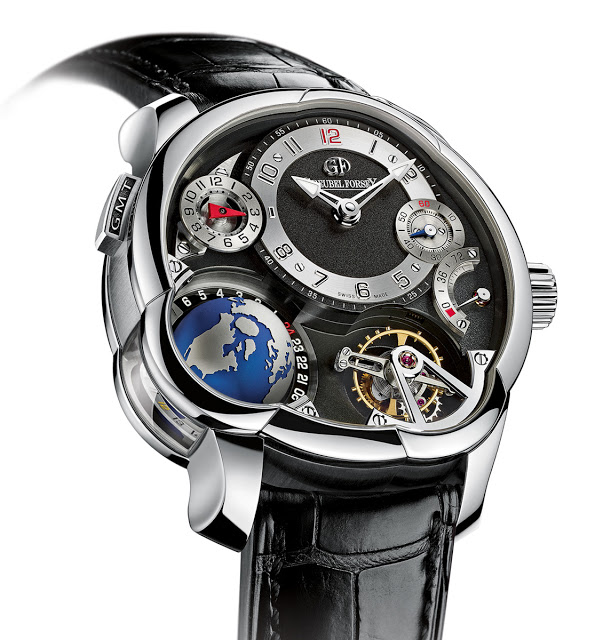 Now available in platinum for the first time, the Greubel Forsey GMT combines the brand’s signature inclined tourbillon with a dual time zone and world time display, creating a travel watch for the private jet set. With the tourbillon being Greubel Forsey’s trademark complication, the Greubel Forsey GMT is naturally fitted with one. It is equipped with a 24-second tourbillon inclined at 25°, meaning it rotates once every 24 seconds on a plane at a slight angle to the dial. Alongside the tourbillon is a sphere representing the Earth, which indicates day or night of any point on the globe. Just above the globe, at 10 o’clock, is the second time zone hand. The second time zone is set in one hour increments by the button at 10 on the case. On the back is the world time disc, showing the time in 24 time zones, which moves in tandem with the globe on the front. While the earlier gold versions of the GMT had grey dials, the GMT Platinum has a black dial. The case remains the same dimensions at 43.5 mm wide and 16.14 mm high.    In Singapore the Greubel Forsey GMT Platinum retails for 874,725 Singapore dollars, including 7% tax. That is equivalent to about US$688,000. And in Swiss francs the price is 545,000 before any taxes. – SJX Follow us on Facebook, Instagram and Twitter for updates and news.