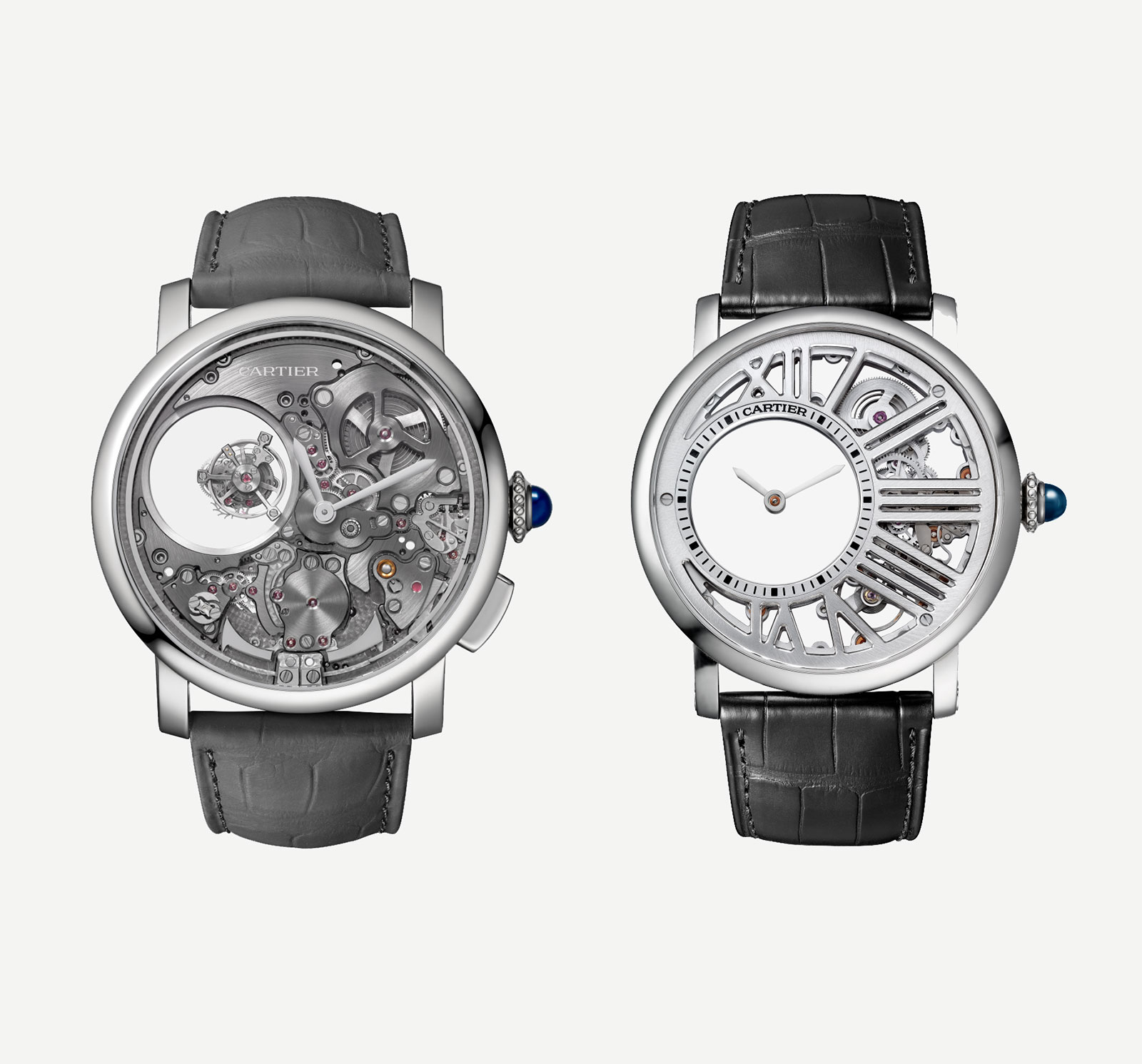 Cartier’s Fine Watchmaking line of haute horlogerie continues to expand apace with three new additions that will be presented at SIHH 2017 in just over a month.

The flagship complication, or actually triple complication, is the Rotonde de Cartier Minute Repeater Mysterious Double Tourbillon. Powered by the 448-part calibre 9407 MC, this features a minute repeating function similar to that found in last year’s Grand Complication Skeleton, the most complicated wristwatch ever made by Cartier. To maximise the volume of the chimes, the 45mm case is titanium with a hollowed-out interior. And to show off the movement, there is no dial at all. Both hammers are visible at six o’clock, while the gong circles the edge of the face. Most of the bridges and base plate are plated in black rhodium, for a dark grey finish that contrasts with the steel and silvery rhodium-coated parts. Like all of Cartier’s tourbillon watches, this calibre is hallmarked with the Poinçon de Genève, or Geneva Seal.

More intriguing is the mysterious double tourbillon inside an airy aperture at 10 o’clock that’s 15.5mm wide, almost 40% of the real estate in front. The tourbillon makes a one-minute revolution on its own axis, and another five minute revolution around the aperture. Like all of Cartier’s other mysterious watches, which are inspired by its mystery clocks of the 1930s, the secret to the floating tourbillon is a clear sapphire disc with hidden teeth on its rim that engage with the gears of the movement.

Limited to 50 pieces, the Rotonde de Cartier Minute Repeater Mysterious Double Tourbillon is also available with baguette-cut diamonds on the bezel, or entirely covered in diamonds. The latter two are limited to 30 and 20 pieces respectively.

The Rotonde de Cartier Skeleton Mysterious Hour is a more elaborate variant of Cartier’s basic mystery hours wristwatch. The hand-wound calibre 9983 MC inside is almost identical to that found in the other Mysterious Hour watches, except here it is has been open-worked. All the bridges and base plate are in German silver, due to the rigidity needed to compensate for the material removed to skeletonise them. Both hands float magically, being mounted on separate sapphire discs. And the mechanics of the movement are suspended in midair as well, with the gear train visible between one and four o’clock on the dial.

The 42mm case is palladium, a white, hard metal that’s in the same family group as platinum.

Cartier’s trademark big cat tells the time on the Panthère Joueuse. The diamond-set panther with black lacquer spots and emerald eyes indicates the minutes with its paw, while the ball it is chasing points to the hours.

Like a handful of Cartier’s other in-house movements, the calibre 9918 MC inside has elastic teeth on the gears for the time display to eliminate play and ensure precise motion as well as setting.

The case is white gold and 40mm in diameter, with the hand-wound calibre 9918 MC inside. The diamonds on the case and dial total 6 carats.

Another version available is fully set with 17.8 carats of diamonds on the case and bracelet. 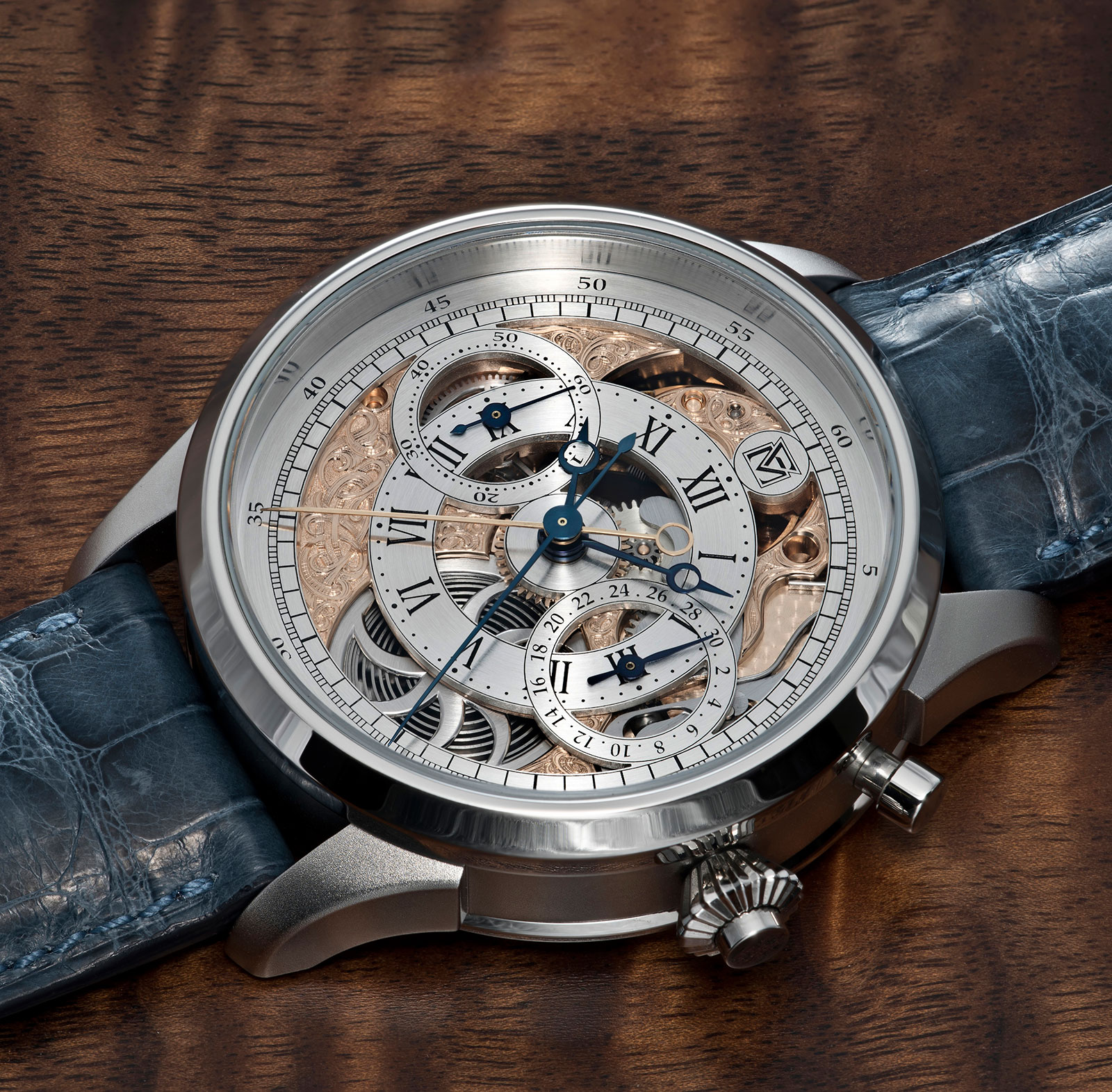 Founded by a pair of young watchmakers, Molnar Fabry specialises in heavily decorated, customised watches. Named after founders Michal Molnar and Igor Fabry, the firm is based in Slovakia and produced only a dozen or so watches a year. Trained as jewellers, the initially focused on gem-set watches, but have since completed a diverse range of complicated timepieces, including tourbillons utilising modern day Christophe Claret and Technotime movements.

The latest custom timepiece from the duo is the White Lotus Rattrapante, a one-off, single-button split-seconds chronograph equipped with a rebuilt pocket watch movement from the 1930s. The White Lotus Rattrapante, on the other hand, is equipped with a monopusher split-seconds movement made in the 1930s by C.L. Guinand, a now defunct firm that specialised in chronograph pocket watches. Functional but visually bare in its original state, the movement has been completely made over by Molnar Fabry. The C.L. Guinand movement early during the conversion process

The bridges and main plate were plated in pink gold and engraved in the banknote style, a technique famously used for currency printing plates that uses fine lines and dots to create depth and detail. And to enhance the decorative effect, the three-quarter plate on the top and main plate on the bottom were partially open-worked. In addition, a handful of other components were also open-worked, most notably the barrel, which is visible on the front through the semi-skeletonised dial. All other components were also refinished, with the steel springs and levers of the chronograph mechanism receiving particular attention, with polished, bevelled edges and straight grained surfaces. Because the movement was intended for a pocket watch, the resulting wristwatch conversion is similarly large. The stainless steel case measures 45.8mm in diameter, with the lettering on the case back engraved by hand. Made of pure silver, the dial is open-worked to show off the engraved base plate, while the hands are blued steel. The White Lotus Rattrapante is a one of a kind creation commissioned by a client, priced at €42,000. Molnar Fabry is able to undertake similar projects and can be reached via their website.