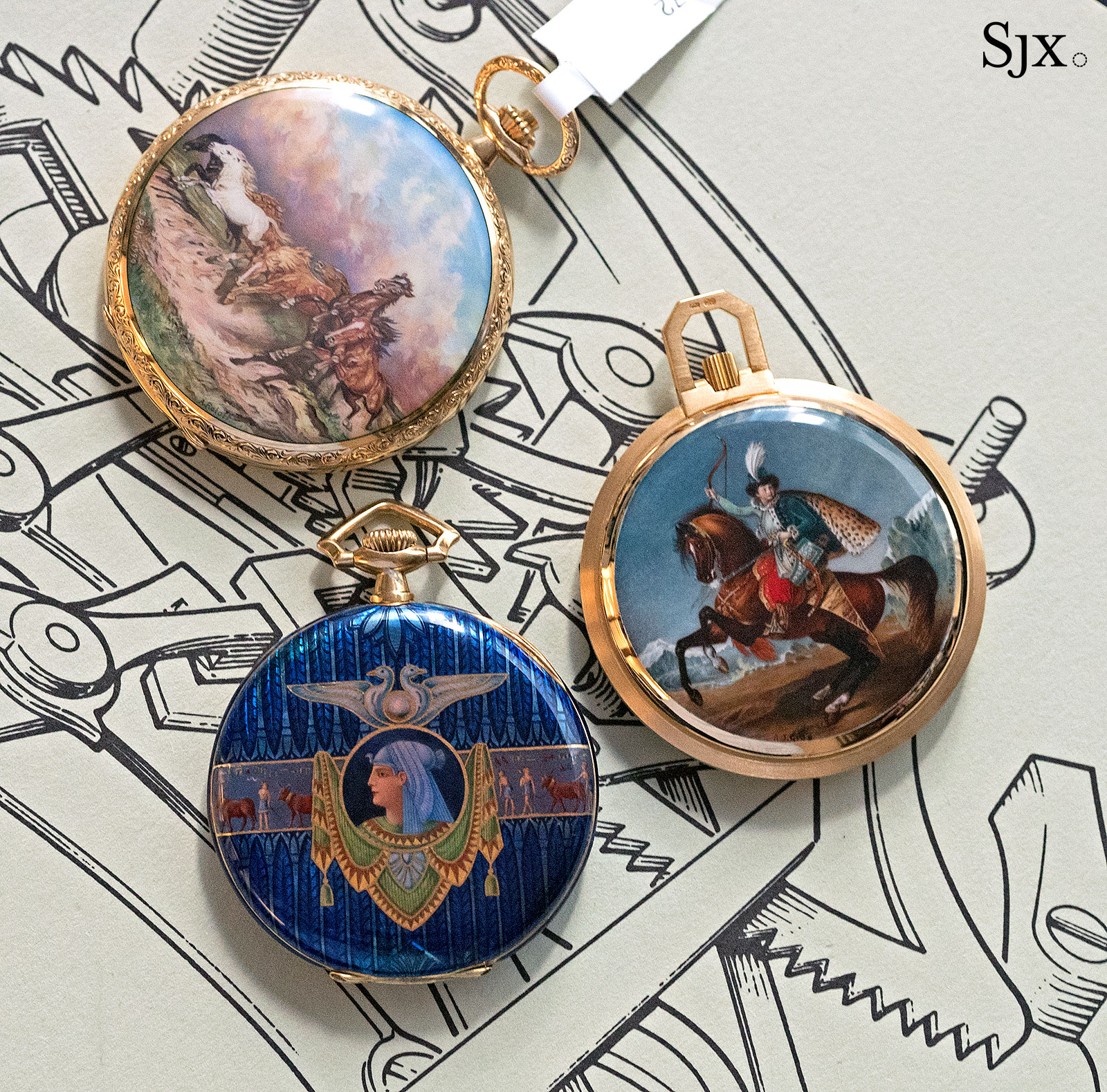 Phillips’ third Hong Kong watch auction hit the headlines two months ago when the auctioneer revealed not one, but two, Philippe Dufour Simplicity wristwatches in the sale line-up. The rest of the 300-lot sale represents the grand diversity of watch collecting, ranging from avant-garde independent watchmaking to remarkably fine miniature enamel pocket watches, even including an intriguing Greubel Forsey IP1 that’s the property of Jean-Claude Biver, chief executive of TAG Heuer,

The sale takes place on November 29 in Hong Kong, just two weeks after Phillips’ Geneva office brings the hammer down on what will likely be the most expensive wristwatch ever sold at auction.

Here’s the first part of our look at key watches from the sale. Stayed tuned for part two on Friday. The full catalogue is available here.

Lot 1093*: MB&F HM4 “Thunderbolt” – Arguably the most striking timepiece designed by Maximilian Büsser, the eponymous founder of MB&F – short for Mr Büsser and his friends – the Horological Machine No. 4 (HM4) is less a watch than a mechanical sculpture on the wrist. Made entirely of titanium, the HM4 is made up of two conjoined pods, with vertical dials on the end of each. One shows the power reserve and the other, the time. It’s powered by a hand-wound movement constructed to fit the unusual case shape, resulting in a movement that’s shaped like Star Trek‘s “Starship Enterprise”. Only 100 of the HM4 were made, with this specimen being one of the first produced, numbered “18”. Past examples of the HM4 had sold for handsome sums at past auctions, including a handful that exceeded the original retail price, like the one-off yellow gold HM4 that went for just under US$250,000 at Sotheby’s last year. Practically unworn and wonderfully impressive to behold, this IP1 is one of 11 produced in platinum (a further 11 each were made in white and pink gold),but what makes it exceptionally unusual are a handful of significant details unmentioned in the catalogue.

The production date of August 28, 2009 is engraved on the case back, as are a pair of illegible characters that might be initials. Most significant of all is “J-C B” on the dial, just under the power reserve, where the serial number is usually engraved. They stand for Jean-Claude Biver, the head of LVMH’s watch division and chief executive of TAG Heuer, a fact confirmed by the great man himself.

Known as an eminent collector of vintage Patek Philippe watches, Mr Biver has professed his admiration for Greubel Forsey in the past, and owns several of them. Lot 1104: Patek Philippe enamelled pocket watch decorated with Egyptian deity – A strikingly decorated timepiece that is possible unique, this pocket watch was produced in 1900 but sold in 1922 – the very year King Tutankhamun’s tomb was discovered. A craze for all things Egyptian dominated the 1920s following “King Tut”. This pocket watch is quintessential of that era, with the back featuring Egyptian god Geb, often depicted with a goose. Usually associated with vegetation and agriculture, Geb is shown here oxen, plants and farmers. The design is executed in cloisonné enamel, with gold wires framing the elements, on a background of rich and translucent blue flinque enamel. The blue enamelling continues on the bezel around the dial, which is white enamel with remarkable striking blued numerals and markings. Astoundingly well kept for something over a century old, the enamelling and dial are free of cracks and imperfections. Lot 1105: Patek Philippe ref. 530 pocket watch with miniature enamel by G. Menni – One of the leading contemporary enamel artists, G. Menni was active for two decades starting in the early 1980s. Considered one of the leading miniature enamelists of Geneva, Menni was responsible for some of the most notable enamelled Patek Philippe pocket watches of the period.

This particular pocket watch was produced in 1986 and reproduces in miniature enamel a portrait by French painter Jean-Antoine Gros. Now hanging in Moscow’s Pushkin Museum, the painting was completed in 1809 and depicts Prince Boris Yusupov, the young son of a Russian nobleman at the court of Catherine the Great. One of the leading families in Imperial Russia, the Yusupovs were descended from Tatar conquerors, a heritage revealed in Prince Boris’ outfit. The exotic attire, notably the sabre, bow, arrow and boots, are Tatar in style. Rohr painted completed this watch in 1988, reproducing Fire in the Steppe, an early 20th century watercolour by German artist Alfred Roloff. Vibrant with motion and energy, the painting depicts several wild horses galloping across the steppe. Typical of her work, Rohr signed the miniature enamel on the left bottom edge, while putting Roloff’s signature on the opposite edge.

Lot 1131: Patek Philippe ref. 2499/100 fourth series in yellow gold – This is a crisply preserved example of the Patek Philippe’s most sought after perpetual calendar-chronograph, large due to its rarity and largish, 38mm size. Produced in 1982, this example is accompanied by its original certificate. The fourth series, which was the last of the model, is distinguished from the third series by its sapphire crystal. Most examples of the ref. 1526 are in yellow gold; this particular specimen is one of the rare ones in pink gold. Produced in 1951, this pink gold ref. 1526 is in excellent condition, having been well preserved over the years, with the case showing a great deal of original detail. The watch reveals much of the fine detail typical of high-end watches of the period, including the blue enamelled moon phase disc and champleve enamel text on the dial. And the hands are hand-made, evidenced by their thickness and rounded profile. The full catalogue can be seen here.

*The author of this article has an interest in lots marked with an asterisk.