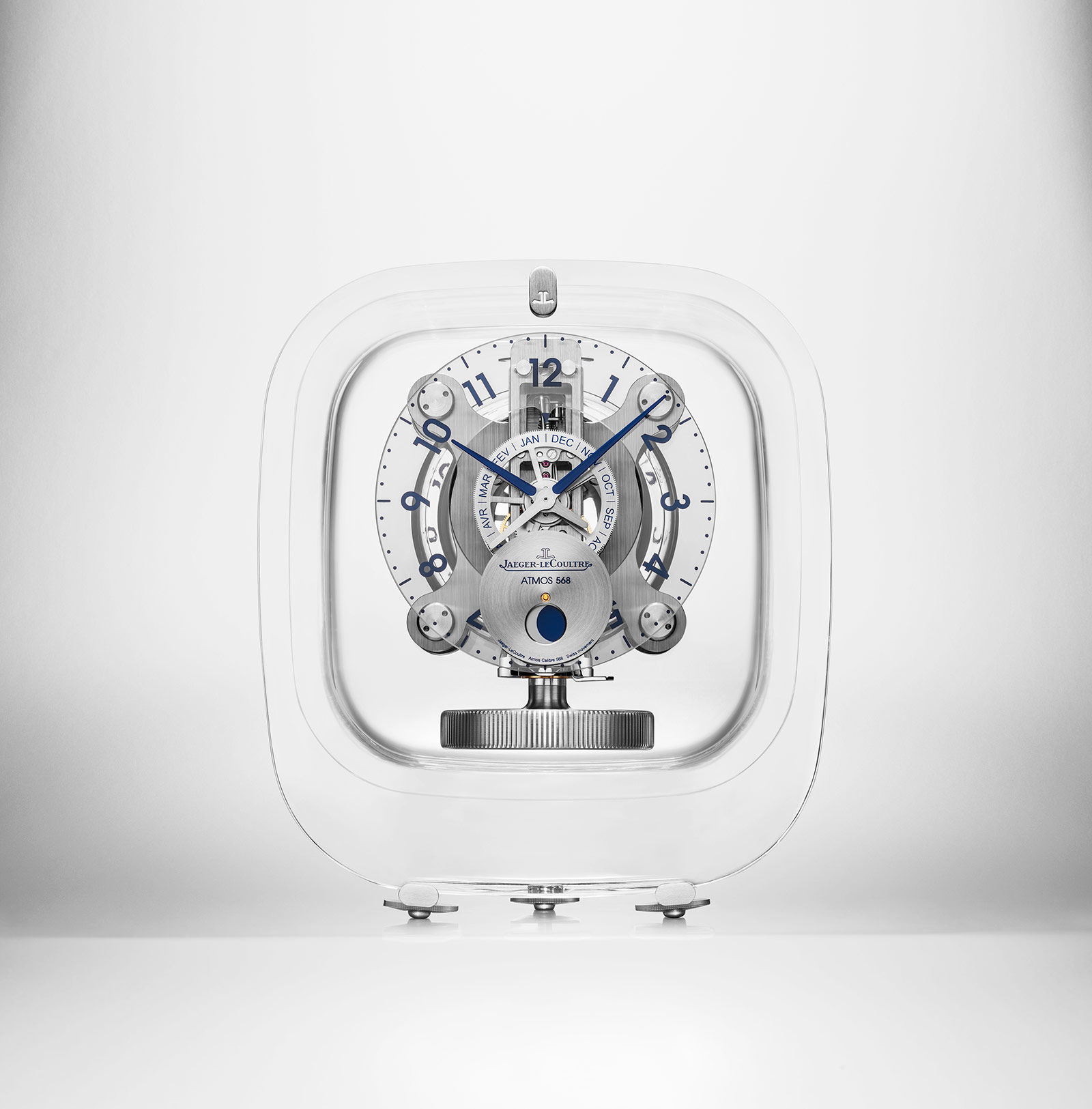 Marc Newson has been a prolific designer of timepieces, ranging from wristwatches to sleek hourglasses. The Australian has had a particularly productive relationship with Jaeger-LeCoultre, having designed two earlier Atmos clocks – the Atmos 561 and more complicated Atmos 566 – as well as one-off timepieces for charity.

Best known for the sleek, riveted Lockheed Lounge – now the most expensive object by a living designer – Newson is also Designer for Special Projects at Apple, with the Apple Watch being one of his creations. Characterised by smooth lines and rounded corners, Newson’s latest work is the Atmos 568. The Atmos 568 is instantly recognisable as a Newson creation, with a strong familial resemblance to his other Atmos clocks, though it is a completely new creation.

According to Newson, “Most of the visible pieces have been re-designed, the hands, dials, increments, the case, the counterbalance, the base and the structure of the movement and its interface with the glass.” While the earlier Newson clocks are often described as ice cubes, being rounded on the edges with gently curved surfaces on all sides, the new Atmos 568 is flat on the front and back, giving it a more geometric form and a hint of 1970s styling.

Made of crystal glass – a type of glass with a high lead content that gives it sparkle and clarity – the body of the clock is made up of two pieces of glass. One is a larger section comprising the sides and back, and the other is a flat front panel that can be removed via the small metal clasp at 12 o’clock, allowing access to the movement to set the time. The crystal glass – described by Newson as a “a beautiful and noble material” – is produced by Baccarat, the 250-year old French maker of high-end crystal glassware that was also responsible for the previous Newson Atmos clocks. Though crafted with an extremely thick and heavy base for stability, the walls of the body are as thin as 13mm, demonstrating Baccarat’s finesse in working the material.

Functionally the Atmos 568 is identical to the first Newson Atmos, showing the hours, minutes, month as well as phase of the moon. The chapter ring for the hours is clear glass, with the hour numerals and hands in a shade of dark blue selected by Newson. All the metal surfaces have a brushed finish, while the balance wheel at the very bottom of the movement has been redesigned with smaller teeth featuring alternating matte and polished surfaces. Like all Atmos clocks it runs on an exceptionally efficient mechanism powered by air, thanks to a special mix of gas inside a sealed capsule that expands and contracts with minute changes in ambient temperature – a one degree change in temperature is enough to run the clock for two days. Shaped like the bellows of an accordion, the changing length of the capsule winds the clock’s mainspring. While the previous Newson clocks were limited editions, the Atmos 568 is part of the regular collection.