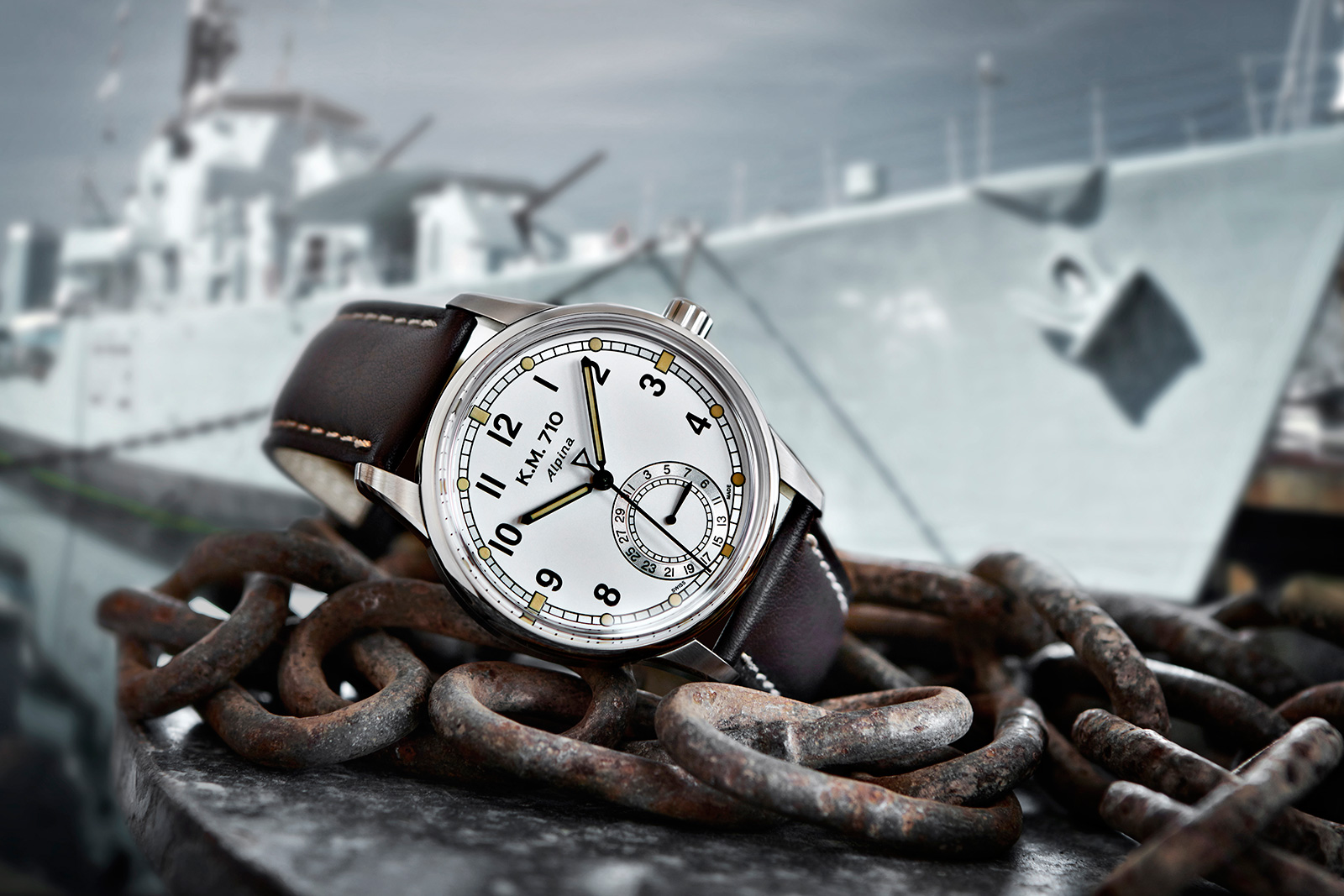 Alpina was one of the watchmakers that supplied wristwatches to the Kriegsmarine, the World War II German navy. Marked “KM” on the dial, short for Kriegsmarine, these military-issue watches were small, typically 33mm in diameter, but distinctive, with silvery-white dials and black Arabic numerals. WWII original at left, KM-710 on the right

While the WWII Alpina watches were marked “KM 592” on the dial, a reference to the calibre 592 inside, the modern remake is named after the calibre AL-710. The new Alpina KM-710 adopts the look of the original KM watch, but reinterpreted as a distinctly modern watch in a larger size with an added date indicator. Alpina’s designers managed to convey the vintage style without merely reproducing the original. Unlike other vintage remakes that have a date window that’s incongruous with the retro look, the KM-710 smartly uses a sub-dial to indicate the date. While the reduced size of the numbers on the sub-dial means it is slightly less legible than a window display, the sub-dial date blends in much better.

The Super-Luminova on the dial and hands is beige to mimic the look of vintage watch dials, while the sapphire crystal is domed, again to replicate the look of Plexiglas crystal on the original KM watches. The stainless steel case, however, is a modern 41.5mm in diameter and water-resistant to 50m. Inside is the AL-710, Alpina’s in-house automatic movement with a 42-hour power reserve. 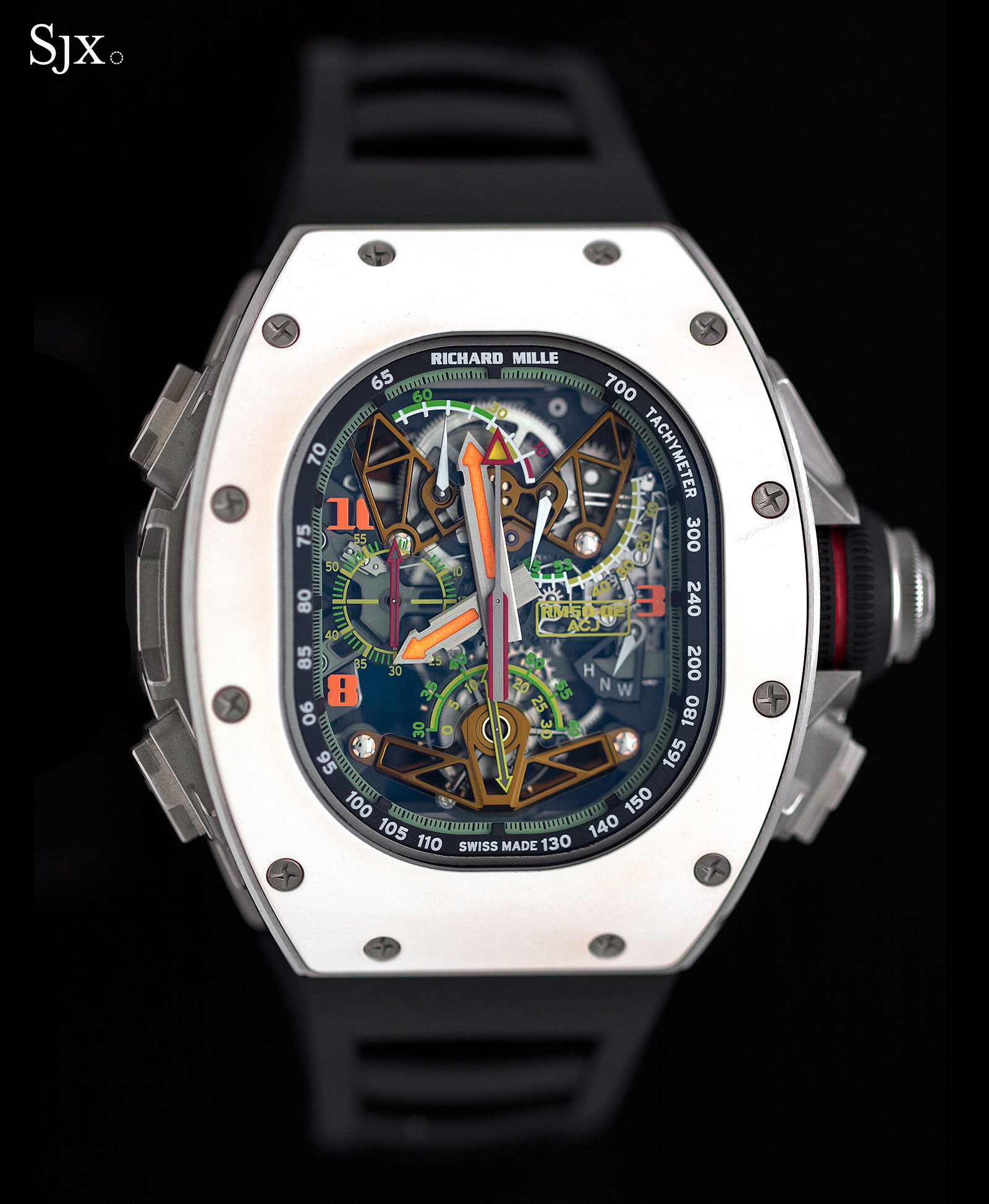 Richard Mille occupies a special position in the watchmaking landscape, capturing perfectly the zeitgeist of the ultra-rich. And the RM 50-02 ACJ, a new release from SIHH 2016, exemplifies that. The design is the product of both Richard Mille and Airbus Corporate Jets (ACJ), two firms that share the same target audience. ACJ is the division of the European plane maker that turns its aircraft into flying palaces, having lavished its aesthetic sensibility on the RM 50-02, which is powered by the most complicated movement Richard Mille uses in its wristwatches. The RM 50-02 ACJ is the sort of watch that would appeal to a millionaire who loves Iron Man and Philipp Plein clothing; it looks like an obvious, expensive and high-tech gadget. Its size alone is striking, being very large at 42.7mm wide and 50.1mm long, resembling a section of a plane fuselage, with a sapphire crystal shaped like an aircraft window, set against a white ceramic plate. But because it’s made of titanium – both the case and movement bridges – the RM 50-02 is lightweight. Up close the watch reveals a riot of colours and detail that’s typical of Richard Mille. Most of the movement is skeletonised, while the dial is a clear sapphire disc, revealing the mechanics of the watch. The stark white of the case is jazzed up with brightly coloured details on the dial in orange, yellow, red and green. And several bridges are an unusual bronze colour, the result of an anticorrosion coating that’s used for aircraft parts. But the look belies the traditional construction of the calibre. The movement has been styled to look high-tech and gadgety, with grooves and notches on the components. But the irony is that the calibre is largely constructed (by Audemars Piguet subsidiary Renaud & Papi) in a traditional manner. A time travelling watchmaker from 1950 would probably be able to overhaul it. The movement has an immediate nerd appeal, with overwhelming visual complexity as well as the depth that is typical of a split-seconds chronograph (since the mechanism of the chronograph needs to be stacked up). Though the movement is recognisably old school in construction, its finishing is modern in a manner that will disappoint traditionalists. Many of its components are cleanly finished with straight or circular graining that helps with the modern look. The gadgety ornamentation continues on the case, which has its sides adorned with arrows and ridges plus an extra-large, multi-level crown topped with the ACJ logo. And the case even uses Torq Set screws to hold the front and back plate together. Distinguished by their spiral slots, these high-end screws are also used in Airbus aircraft. The RM 50-02 ACJ is limited to 30 watches with a price tag of US$1.05m. That number is defies gravity and economic reality, but Richard Mille’s prowess and appeal is truly singular.