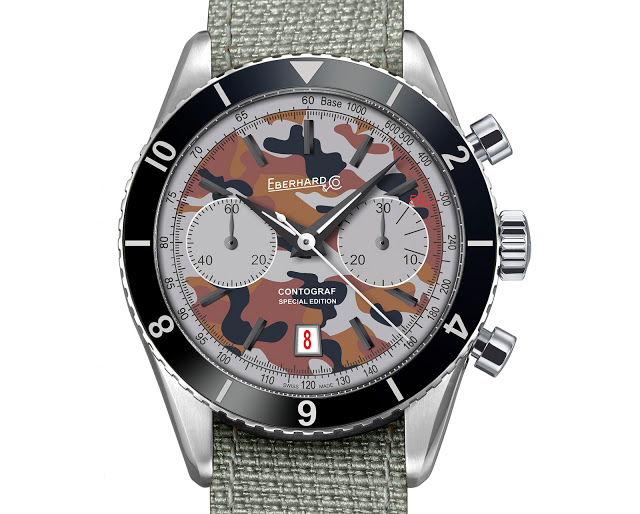 Eberhard & Co. has been tasked with producing a series of chronographs for the officers of the Sultan of Oman’s Armed Forces, featuring a desert camouflage dial. With the Sultan Qaboos bin Said Al Said of Oman a recognised watch collector with a significant collection – not to mention the Rolex wristwatches with Omani crests that command huge premiums at auctions – the fact that officers of the sultanate’s armed forces will be issued an Eberhart & Co. chronograph is no surprise. The Sultan of Oman’s Armed Forces has commission a limited series of the Camouflage Contograf featuring a desert camouflage motif dial, with the emblem of the Omani armed forces on the case back. This is a variant of the Contograf Camouflage introduced last year, a limited edition of 99 pieces with a green jungle camouflage dial. Dial and back aside, the camouflage editions are identical to the regular production Contograf, a wristwatch modelled on 190s chronographs. The case is 42 mm, stainless steel, with a Valjoux 7750 inside. An anachronistic detail carried over from the 1960s Contograf are the extended markers for the third, sixth and ninth minutes on the minutes counter at three o’clock. These were originally intended to time long distance phone calls before the days of Skype. The Camouflage Contograf was made in limited quantities for the senior officers of the Sultan of Oman’s Armed Forces. Issued only to Omani military personnel, it is not available for sale, though the civilian version of the Contograf is, for SFr5500 on a leather strap and SFr6200 on a steel bracelet. That being said, the Omani armed forces Contograf will doubtless come up for sale at auction eventually.