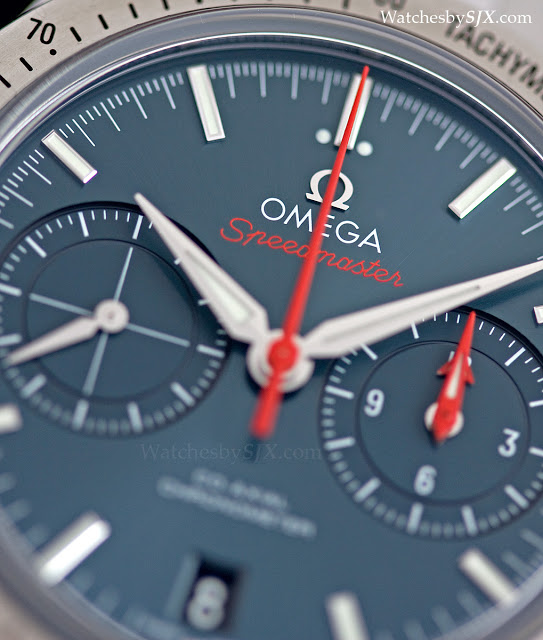 Modelled on the early fifties Speedmasters, the Omega Speedmaster ’57 made its début earlier this year at Baselworld 2013. It’s the new entry-level Speedmaster equipped with the cal. 9300 Co-Axial movement, inside a more classically size case. The straight lugs of the Speedmaster ’57 immediately give it a slightly retro feel, a welcome departure from the typical Speedmaster design which is a no doubt a classic, but overly common. Though the straight lug case is not as complex as the lyre lug version, the Speedmaster ’57 demonstrates the same level of case finish as its compatriots. It exhibits both brushed and polished surfaces, with a neat border between different finishes. At 41.5 mm in diameter the case is large but not overly so. The moderate size gives this a more believably vintage-inspired feel.  Notably this is the only Omega chronograph equipped with the cal. 9300/9301 which is this small (if 41.5 mm can be called that); the other sports chronographs are all over 44 mm, like the new Aqua Terra Chronograph GMT for example, and even the De Ville Chronograph is 42 mm.  Though the case is offered in the usual metals – yellow and rose gold, steel or titanium – the titanium version has a striking blue dial with red accents.

All variants of the Speedmaster ’57 have a display back which shows off the cal. 9300 or 9301 inside, the latter used only in the gold versions of the watch. Both movements are identical, except the cal. 9301 has a solid gold rotor and balance bridge.

The cal. 9300/9301 has all the bells and whistles found in modern Omega calibres, namely the lubrication-free Co-Axial escapement and the Si14 silicon hairspring, innovations designed to improve timekeeping and reliability (and anecdotal evidence suggests they do). A key feature of the cal. 9300/9301 are the chronograph hour and minute hands, which are found on the same counter at three o’clock. This allows the watch to have only two sub-dials, but at the expense of clarity in certain models where the two hands are difficult to distinguish.