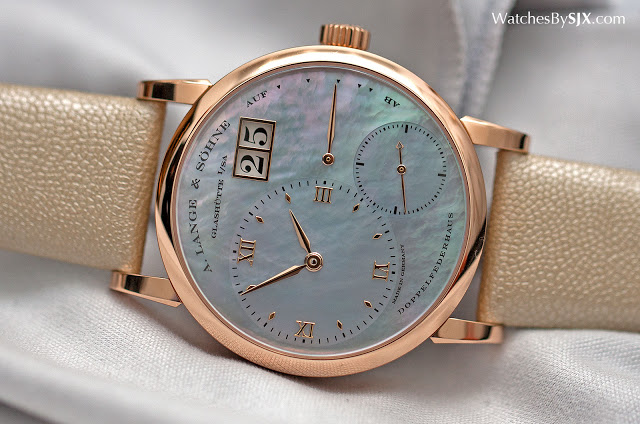 Conceived as a ladies’ watch, the Little Lange 1 nonetheless retains all the technical and aesthetic qualities that made its male counterpart an icon. We take a look at the latest Little Lange 1, featuring a blue mother of pearl dial, complete with photos and price. Iconic is a term oft overused, but the Lange 1 is justifiably described as such. It’s immediately recognisable, essentially the face of A. Lange & Söhne. By and large a men’s watch, the Little Lange 1 has been offered as a ladies’ timepieces in various guises, most recently with a blue lacquered mother of pearl dial. But it wasn’t always for ladies… The Little Lange 1, however, was first conceived as a men’s watch. Almost 20 years ago, just a few years after its introduction in 1994, client demand for a smaller Lange 1 – the original 38.5 mm size was too big in those days – resulted in the Little Lange 1. Just 36 mm in diameter, the Little Lange 1 had the same dial and movement as its larger brother, but in a smaller case without a button to advance the date (a recessed pusher did that job instead). The only adornment on the Little Lange 1 is the mother of pearl dial. It’s actually a disc of sterling silver (all Lange dials are silver with solid gold hands and markers), treated with a blue galvanic coating, then covered with a thin, translucent slice of mother of pearl. That gives the nacre a bluish iridescence. Though feminine and slightly extravagant, the look is still serious minded enough to pass for a Lange. Unlike the second generation men’s Lange 1 that’s now equipped with a new movement, the Little Lange 1 retains the original calibre L901.4 movement. It’s not quite as sophisticated as the movement in the men’s version, but it is definitely more decorative and visually appealing. It has the quintessential features of the Lange 1: an oversized date display as well as a three day power reserve.