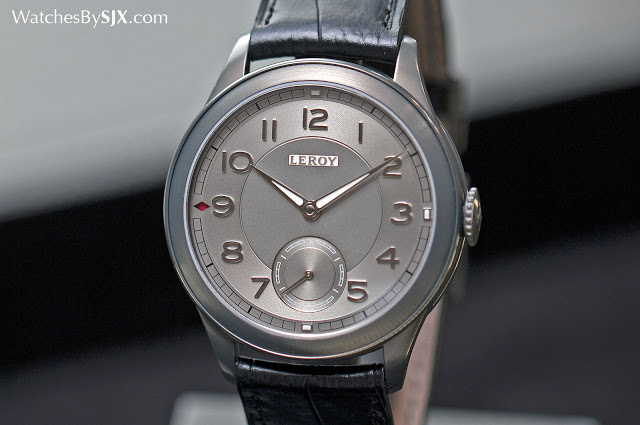 More than just a one-off dial and case, the Leroy Chronomètre Observatoire will be the only one ever made as the L200 movement inside will not make it into series production, being too complex and expensive. The flagship wristwatch of Leroy was to have been the Chronomètre Observatoire powered by the calibre L200, which is why a one-off variant entirely in aluminium was created for high profile charity auction Only Watch. But it recently became even more unique, as revealed to exclusively to us by the chief executive of L. Leroy: because the ambitions of L200 movement exceeded commercial reality, the L200 will never make it into series production, meaning the Only Watch edition will be truly singular. A storied name in French timekeeping shared by several watchmakers, including Pierre Le Roy, a contemporary of Ferdinand Berthoud, the resurrected Leroy name is a maker of chronometer wristwatches part of the group that owns movement maker Soprod, giving it the engineering and manufacturing expertise needed to produce reliable movements. Most recently Leroy debuted a pair of impressively complex movements (including the L200 seen here) heavily inspired by classical watchmaking, both the work of Karsten Frasdorf, a talented movement constructor whose past movements, most notable at Fabrication De Montres Normandes (FDMN) and Heritage Watch Manufactory, have always been too sophisticated for commercially viable production.

Mechanical ambitions inspired by history And so it is with the L200 inside the Chronometre Observatoire. The aluminium base plate of the L200 movement in the Only Watch timepiece is marked “P01”, indicating this was the first prototype made. But as it turns out it will be the only one ever made. The L200 is a hand-wound movement with an four day power reserve, powered by twin barrels wound with a grand sonnerie-style winding click. But what makes the calibre special, and too elaborate for series production is the regulator. It has a Robin escapement, or natural escapement, a type of direct impulse escapement, a precision escapement found in some marine chronometers. Because of the nature of the escapement, the seconds hand moves in two-step jumps, a small tick followed by a longer one. Like the detent escapement, the duplex works with little fiction, but requires a little shake to start up. And more importantly, sudden shocks can stop it completely, which is why it’s never been implemented in wristwatch movements. Similarly, the hairspring is no ordinary hairspring, being formed with double terminal curves, inwards and outwards, to improve the concentricity of the balance spring. Just as interesting is the large balance wheel, which has a diameter almost half that of the movement, an abiding principle in classical watchmaking. As is traditional for a high-end chronometer movement, it is free-sprung, with adjustable weights on its rim for poising. What makes it special is the fact that it is contained inside a Brun cage. A regulator invented by M.J. Brun in the early 20th century (examples of his work reside at the International Museum of Horology in La Chaux-de-Fonds), the Brun cage contains the balance wheel and can be rotated for regulating. Turning the Brun cage moves the position of the balance spring stud, changing the starting point of the hairspring, allowing it to be positioned optimally.

The once (and future?) precious metal Beyond the movement construction, the Only Watch edition is also unusual for its material: the case, dial, movement bridges and base plate are made entirely of aluminium. This was inspired by a grand sonnerie carriage clock made by Le Roy in 1894 that was housed in an aluminium case (below). The reason an expensive clock was made of what is today an inexpensive metal is the fact that aluminium was once a precious metal comparable to gold. Before the Hall-Heroult process to smelt aluminium cheaply was invented in 1886, aluminium was exceptionally expensive to refine. Lot 8 in the Only Watch auction, the Chronometre Observatoire Only Watch carries an estimate of SFr30,000 to SFr40,000. Only Watch takes place in Geneva on Saturday, November 7, 2015; there is no buyer’s premium for the auction and all proceeds from the event going to support research into Duchenne muscular dystrophy. Bidding can be done via telephone, online or in-house. Registration to bid can be done here. Correction November 16, 2015: Edited to reflect the fact that the power reserve is four days, not eight as previously stated, and also that Pierre Le Roy was a contemporary of Berthoud, and not Breguet. Also to reflect that the L200 movement features a Robin or natural escapement. Thanks to Oliver R. Müller for pointing out the errors.