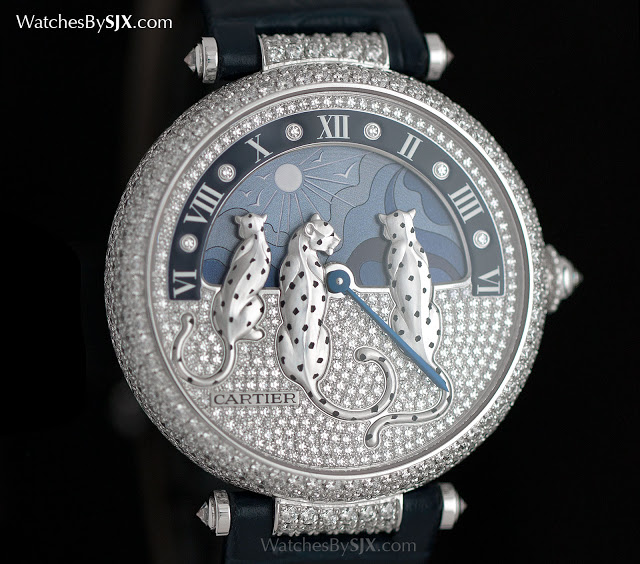 A dazzling, diamond-set wristwatch with a charming day and night time display, the Rêves de Panthères is one of Cartier’s latest “feminine complications”. Rêves de Panthères, “Dreams of Panthers”, is a charming ladies’ wristwatch that combines Cartier‘s signature panther motif with a day and night complication. Instead of an hour hand, half of the dial is occupied by a disc that indicates the hours. The day and night disc features stylised renderings of the sky during the day and at night, with the Sun and Moon pointing the hours on the semi-circular scale with Roman numerals. Gazing up at the sky are three panthers made of 18k white gold, cast in relief and decorated with black lacquer spots. All three panthers sit with their backs to the viewer, a subtle twist to the typical panther decoration on Cartier objects.

Completely set with brilliant-cut diamonds, the rest of the dial is also 18k white gold, as is the case. Just over 6.7 carats of diamonds cover the case and dial, with a tiny bit more on the clasp of the strap. Despite bring relatively large at 42.75mm in diameter, the Rêves de Panthères cuts an elegant profile on the wrist, being a slim 11.75mm high. Not just a pretty face  The 9916 MC movement inside is one of Cartier’s own, and almost identical to the Rotonde de Cartier Day and Night introduced last year. A self-winding movement with a 48 hour power reserve, the 9916 MC comprises a base calibre (in this case the versatile 1904 MC) and a module added on top for the day and night display.  Though the base movement is the same as found in more affordable Cartier watches, the Tank MC for instance, here it is finished to a significantly higher degree. All the bridges are covered with a radial graining, with prominent polished bevelled edges.  [Pictured below is 9912 MC movement that is visually identical to the 9916 MC in the Rêves de Panthères.] The Rêves de Panthères is priced at €130,000. Another version is fitted to a white gold bracelet set with diamonds, and costs substantially more. 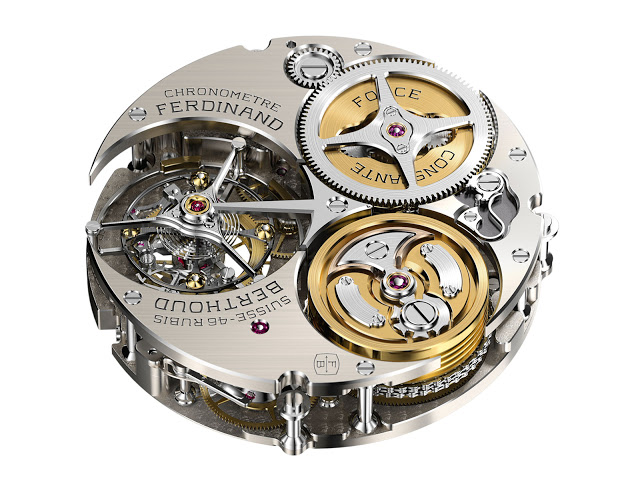 A long dormant name in watchmaking, Ferdinand Berthoud is now back in business, thanks to Chopard. Conceived as a specialist manufacturer of top of the line complications, Ferdinand Berthoud makes it debut with the FB 1 Chronometer, a wristwatch powered by a newly developed movement featuring a tourbillon regulator as well as a chain and fusee constant force mechanism.

Ferdinand Berthoud was born in 1727 in the Swiss town of Neuchâtel, but like all other eminent watchmakers of the era, moved to Paris to practice his trade. A peer of Abraham-Louis Breguet, Berthoud was clockmaker to both the French Navy and King of France. Like his great rival Pierre Le Roy (who also lends his name to a resurrected company), Berthoud is best known for his marine chronometers, which serve as inspiration for the FB 1 Chronometer wristwatch.

The FB 1 Chronometer is the first watch from the recently resurrected name, one that is completely separate from its parent, Chopard. So the new is entirely new, though it is manufactured in Chopard’s factory in Fleurier, the very same facility that produces many of the wonderfully conceived and finished Chopard L.U.C movements. Both L.U.C and Berthoud are overseen by Karl-Friedrich Scheufele, scion of the family that owns Chopard. Given the provenance, the movement is unsurprisingly impressive. It has a tourbillon as well as a chain and fusee, features that are found in other movements, like in the original Lange Tourbillon Pour le Mérite. But what makes the FB 1 different lie in the details of the movement construction. To start with it’s constructed like an old marine chronometer movement, albeit using modern materials. German silver bridges form the top and bottom plates, keeping all the gears in place. The bridges are held together by titanium pillars pillars.

Because the movement is constructed in this manner, some of its components are floating, that is anchored only on one side, instead of both as is convention. The suspending fusee, visible on the back of the movement, is one such floating part.

In the spirit of marine chronometers, the FB 1 is COSC certified, but more importantly, it has a directly driven centre seconds. That means the seconds hand is connected directly to the gear train, instead of being driven via intermediate gears as is common in centre seconds watches.

The FB 1 Chronometer case is octagonal, being vaguely based on similarly shaped marine chronometers of old. It’s 44mm in diameter and 13mm thick. Four sides of the case have sapphire portholes, offering a view of many details inside the movement, made possible by the pillar construction. Two versions of the FB 1 Chronometer are available, both with cases comprised of two materials. The first is in white gold with titanium lugs, while the second is in rose gold with black ceramic lugs. Both are limited to 50 pieces.