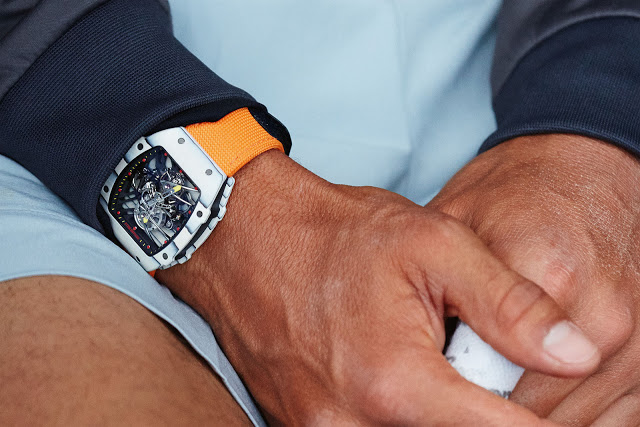 The prototype of the Richard Mille RM 27-02 Tourbillon worn by tennis star Rafael Nadal will be sold for charity at the Only Watch auction in November 2015. Introduced earlier this year, the RM 27-02 is the latest in Richard Mille‘s series of ultra-light wristwatches designed for Rafael Nadal. The tennis champion had on his wrist a prototype of the RM 27-02 during the 2015 tennis season, the very same watch that has been donated to Only Watch 2015, a charity watch auction raising funds for medical research. Worn by Nadal through all the Grand Slam tournaments of 2015, from the Australian Open in January to the US Open in summer (none of which Nadal won unfortunately), the RM 27-01 has a case made of a lightweight carbon composite with a distinctive layered structure. Also made of carbon composite, the base plate is a single piece with the case band, an unusual construction since these two components are separate in most watches.

The base plate, as well as the titanium bridges, is skeletonised, revealing the mechanics of the movement. It’s hand-wound with a 70 hour power reserve, and a tourbillon regulator visible at six o’clock. The outfit Rafael Nadal wore at the 2015 US Open, signed by Nadal, will be sold with the RM 27-02 prototype. It’s one of 43 unique timepieces that will be sold on November 7, 2015, with all proceeds going to funding research into a cure for Duchenne muscular dystrophy. 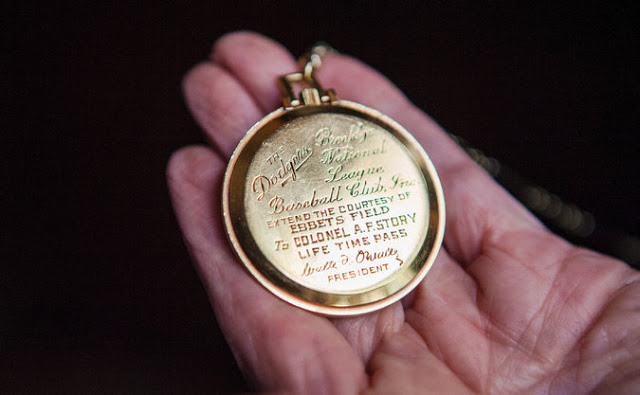 The New York Times tells the story of a gold LeCoultre pocket watch given to Lieutenant Colonel Anthony F. Story, the personal pilot of General Douglas MacArthur, that was also lifetime pass to Ebbets Field, once home to the Brooklyn Dodgers baseball team.

In some ways the ancestor of today’s smartwatches that double up as keys to digital vaults and even physical locks, this Jaeger-LeCoultre pocket watch was once assured lifetime entry into the stadium home to the Brooklyn Dodgers, as detailed in The New York Times. Given Lieutenant Colonel Anthony F. Story by the team’s president, it’s a a lifetime pass to Ebbets Field, once the stadium of the Brooklyn Dodgers base ball team (which became the Los Angeles Dodgers after moving to California in 1957). The origins of the pocket watch are mysterious, with Jaeger-LeCoultre having no record of it. In a twist to the tale, Story said before his death MacArthur had an identical lifetime pass pocket watch, though no trace of that has been found. According to contemporary news reports MacArthur’s lifetime pass was gilded and shaped like a credit card.

Story was pilot to General Douglas MacArthur during his time in postwar Japan and the Korean War, and later became president of the American operations of Jaeger-LeCoultre in 1955, lasting till late 1956.

The New York Times has the full story.

First introduced in steel in 2012, the Speedmaster “First Omega in Space” is a remake of the watch worn by astronaut Wally Schirra on the Mercury-Atlas 8 mission to space in 1962. Not a Speedmaster Moonwatch strictly speaking, since the mission happened before the Moon landing, but well within the family. The latest edition of the Speedmaster “First Omega in Space” is in 18k Sedna gold, with the dial chapter ring, sub-dials and ceramic bezel insert in dark brown.

A fade-resistant rose gold alloy developed by Omega (and similar to the Everose alloy of Rolex), Sedna gold is used in most of Omega’s priciest watches. Not only is it used for the watch case, but also the hands on the dial, including the hands on the chronograph registers. The dial only reads “Omega” and “Speedmaster”, just as it did in 1962. “Professional” was only added in 1966, after NASA selected the timepiece as its official wristwatch. The case measures 39.7mm in diameter, with the hand-wound Lemania 1861 movement inside.

Thought numbered sequentially on the case back, the Speedmaster “First Omega in Space” is not a limited edition. It’s also engraved “October 3, 1962” on the back, the date of Schirra’s mission to space. It’s priced at US$18,000 or S$23,300.

Interestingly, Omega also released a tiny 40 piece limited edition in yellow gold with an identical design sporting a black chapter ring and sub-dials for the Japanese market in 1998, though it was a Speedmaster Professional with the lyre-lug case.