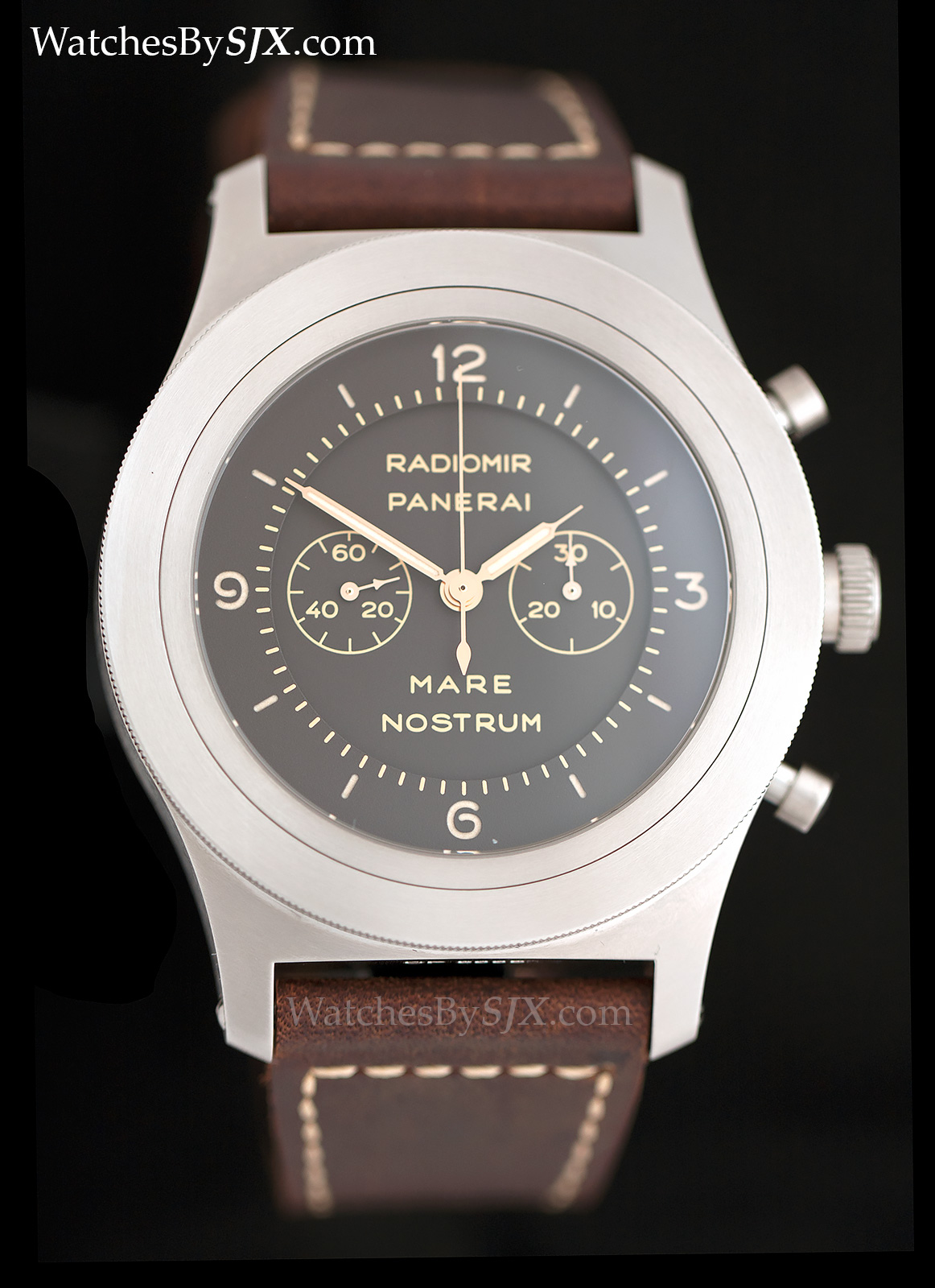 In 2010 Panerai unveiled the first oversized Mare Nostrum chronograph (PAM300), inspired by a prototype officer’s chronograph from 1943. That is now a desirable timepiece on the secondary market, so true to form Panerai introduced the Mare Nostrum Titanio PAM603 at SIHH 2015.

Translating as “our sea”, Mare Nostrum was the Roman term for the Mediterranean Sea, coming back into vogue during the Second World War. And it was for the deck officers of the Italian Navy of WWII that the original Mare Nostrum prototypes were developed.

Aesthetically the new Mare Nostrum is very similar to the 2010 model. The case is 52 mm in diameter, with a brushed finish and a wide, flat bezel. But it is made of titanium, making it less heavy than it looks (the 2010 watch was in steel). The dial is a dark brown with gold hands and parchment markings. Panerai does excel at recreating the look of watches from times past, and the Mare Nostrum feels very much like a vintage watch. As with several Panerai reissue models, the numerals and markers are engraved, then filled with Super-Luminova. Notably, the chapter ring is raised, sitting a step above the centre of the dial. Inside is the Minerva calibre 13-22, here known as the Panerai OP XXV movement. It’s a traditionally constructed and finished movement with German silver bridges. Unlike the 2010 model, however, this has a solid back, keep the movement hidden. That is a shame as like all Minerva movements it is hand-finished to a high standard, far beyond what is typical of a Panerai. Up Close With The Panerai Radiomir Firenze PAM604 (With Original Photos, Price)

A small run of 99 pieces available only in Florence, the Radiomir Firenze PAM604 is the first Radiomir decorated with engraving, done by hand in the Florentine style. 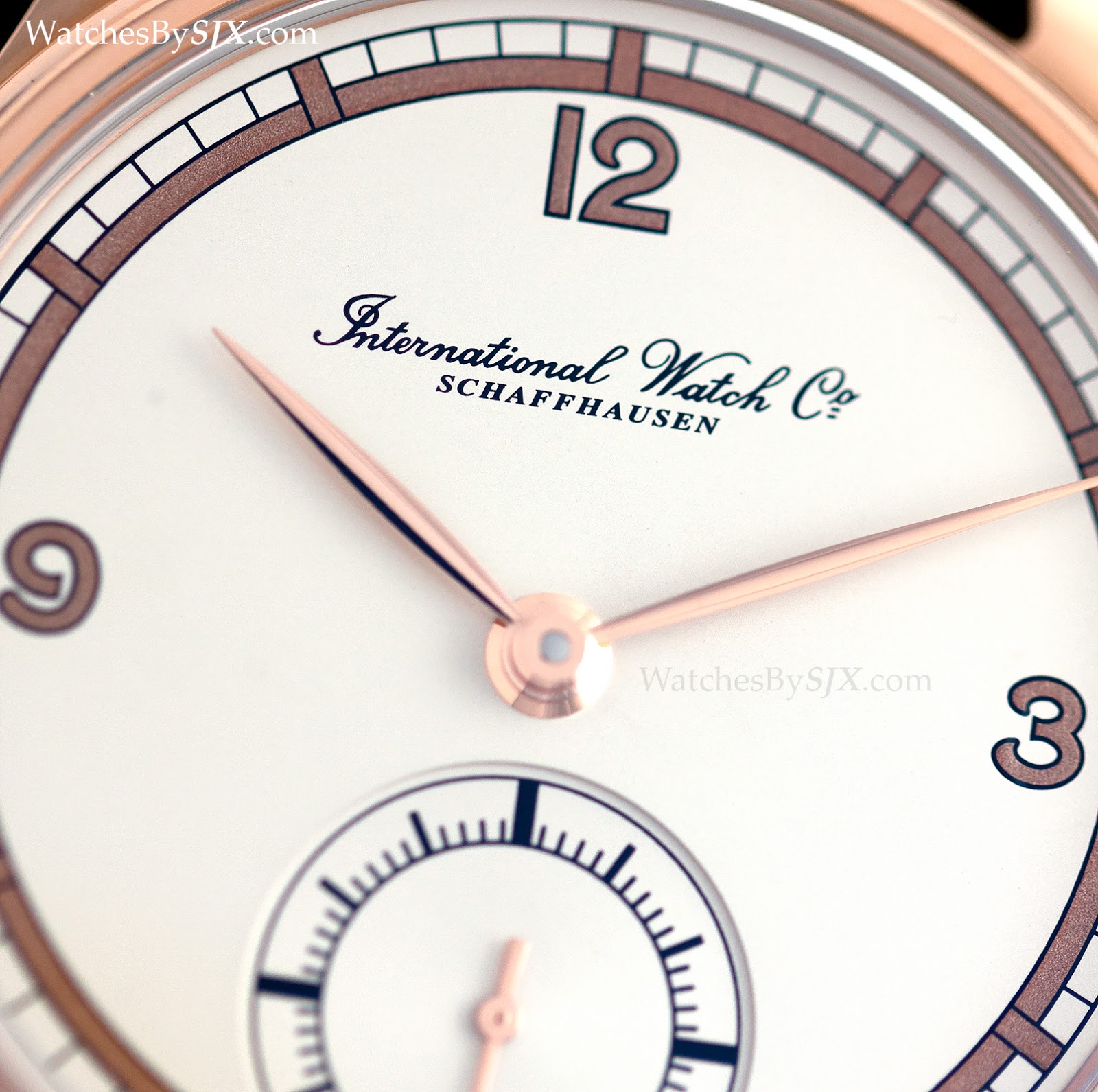 For the 75th anniversary of one of its signature timepieces IWC has created the Portugieser Hand-Wound Eight Days “75th Anniversary”, a convincing vintage style wristwatch powered by the calibre 59215. One of several new Portugieser watches IWC just unveiled at SIHH 2015 (including the Portugieser Annual Calendar), the Portugieser Hand-Wound Eight Days 75th Anniversary is a limited edition version of the first Portuguese Hand-Wound with a vintage-inspired dial. Though mechanically identical, the 75th Anniversary limited edition is modelled on a very rare variant of the original reference 325 Portuguese made in the 1930s.  The dial is an adventurous design – only the hour markers at each quarter are present, with the dial ringed by a bold variation of the traditional railway minute track. And IWC returns to the classic italic script logo in this limited edition, something that collectors are surely pleased about. The sole concession to modernity is the date window at six o’clock – a necessary evil in most modern watches. Being integrated into the sub-seconds means it is less prominent, with the round date window blending into the dial well. Inside is the hand-wound calibre 59215, featuring an eight day power reserve. It’s a simply designed movement, with a small but free-sprung balance wheel, and mechanically applied decorative finishing. (Traditionalists prefer large balance wheels for their high inertia but long power reserves typically call for small balance wheels.) The overall aesthetic effect of the movement is not out of place with the vintage style of the watch. The case is 43 mm wide an 12 mm high, large but relatively slim. Most notable is the domed, box-shape sapphire crystal that approximates the domed form of the Plexiglas used in vintage watches. It’s an attractive feature, and fortunately IWC is using this type of sapphire crystal for the first time on several SIHH 2015 Portugieser models. The Portugieser Hand-Wound Eight Days “75th Anniversary” is available in red gold with a silvered dial in a limited edition of only 175 pieces, or steel with a stark black dial in an edition of 750 pieces. Of the two the red gold version is more attractive, looking suitably vintage without being affected. The steel version looks slightly plain in comparison, despite the high contrast dial.  Price for the gold version is 22,000 Swiss francs or 29,500 Singapore dollars, while the steel model is 11,000 Swiss francs, or 15,800 Singapore dollars. Both are available only at IWC boutiques.