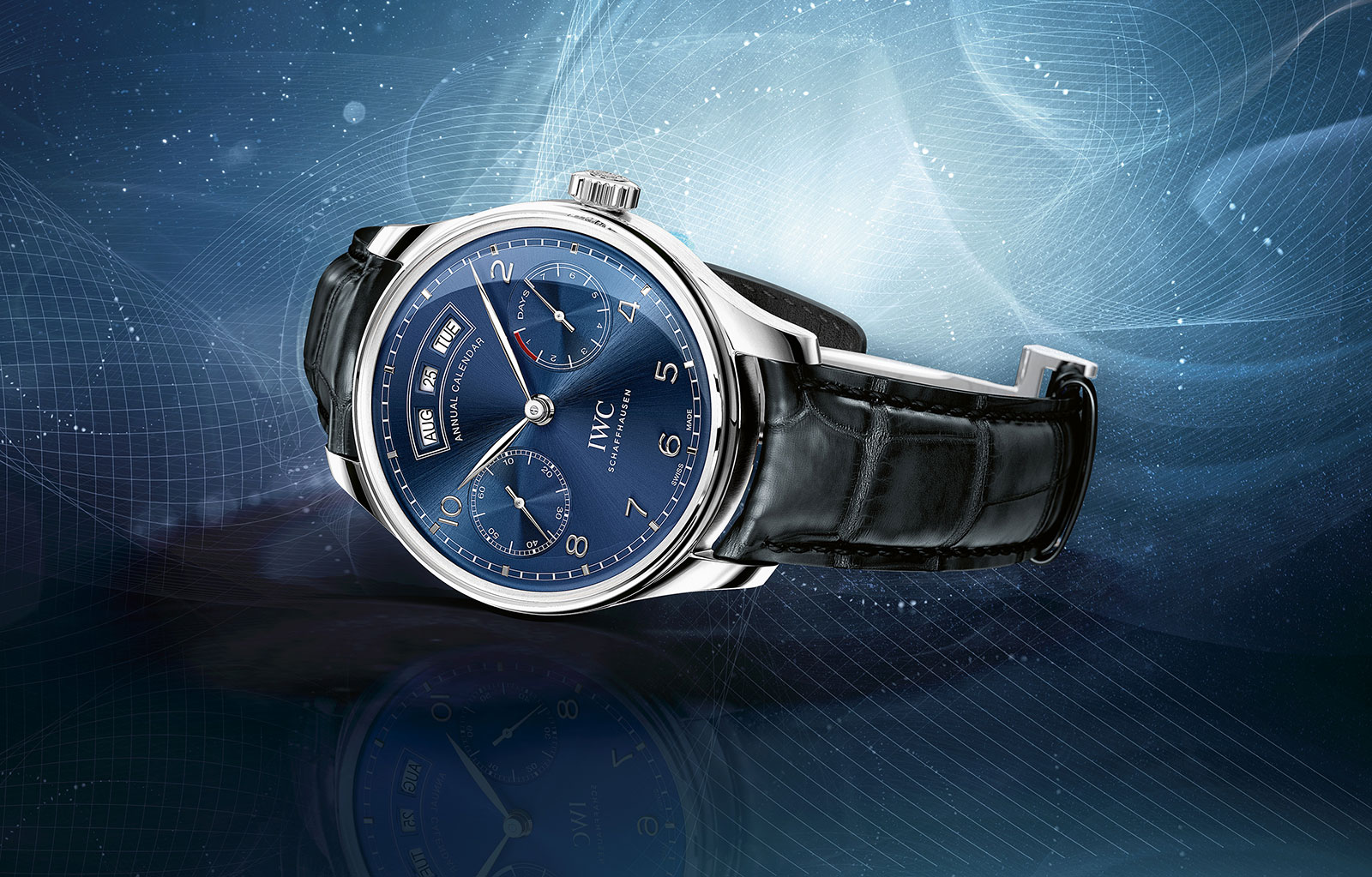 With 2015 being the 75th anniversary of the Portuguese, IWC will unveil a thoroughly redesigned line-up of Portuguese timepieces at SIHH later this month, including the Portugieser Annual Calendar as well as the new calibre 52000 seven day movement. SIHH 2015 will see IWC rework its entire Portuguese collection, arguably the brand’s most important range of timepieces both commercially and technically. Almost a dozen new models will be presented in 2015, which is the 75th anniversary of the Portugieser watch, including the Portugieser Annual Calendar, as well as three new movements.  Many of the new watches take inspiration from historical models, and IWC is taking the past seriously enough that the collection is now the Portugieser, which is German for “Portuguese”, just as it was in the past.  The new Portugieser Annual Calendar has the familiar look of the seven days Portuguese and the same 44.2 mm wide case, but with a completely new complication that’s a first for IWC. Three windows on the top half of the dial show the month, date and day, while the seconds and power reserve are in their traditional nine and three o’clock positions. While vertically symmetrical, the dial layout makes it somewhat top heavy. A New Movement All three calendar displays are of the jumping, rather than dragging, type with levers to advance the calendar discs. Though it has a seven day power reserve just like the current calibre 5000, the calibre 52850 in the annual calendar is a new movement.

As with most IWC automatics the calibre 52000 movements have the robust, bidirectional Pellaton winding mechanism, proprietary to IWC. But the winding wheels are now in black ceramic and winding pawls in white ceramic, making them nearly impervious to surface wear. The white ceramic pawls can be found in the current calibre 5000 movements, like in the steel Portuguese Perpetual Calendar. Visually the calibre 52000 have also been dressed up. Whereas IWC movements were historically well engineered but plain, the new 520000 movements have blued screws and more refined decoration. The automatic rotor has been slimmed down and inset with a solid red gold medallion bearing the IWC motto “Probus Scafusia”.  At 15.3 mm high the annual calendar is only 1.3 mm thicker than the current Portuguese Automatic. But the thickness is not just due to the movement or case, but also the domed sapphire crystal, a new feature that is present on several of the SIHH 2015 Portugieser watches. The annual calendar will be available in steel with a blue or silver dial, as well as red gold with a silver dial. Pricing has yet to be announced, but expect it to be reasonable, as is the trend in the industry now. The New Collection At A Glance Only brief details on the rest of the new Portugieser line have been revealed, and here is a sum-up of the new models, some of which are paired with Santoni straps. 1. Portugieser Perpetual Calendar Digital Date-Month Edition “75th Anniversary” – a perpetual calendar with the oversized date and month display found in models like the Aquatimer 2. Portugieser Hand-Wound Eight Days Edition “75th Anniversary” – a vintage style, hand-wound watch that will be similar to the Portuguese Revolution Edition, powered by the calibre 59215 that’s similar to that found in the recent Portofino Pure Classic

3. Portugieser Yacht Club Chronograph – visually similar but now 43.5 mm in diameter, as compared to 45.4 mm before

5. Portugieser Perpetual Calendar – this continues with two variants, double moon (ref. 5034) and single moon (ref. 5033), but both are now equipped with the new calibre 520000-derived movement, and the double moon model now has a more traditional railway minute track

6. Portugieser Automatic – this too will use the new calibre 52000 seven day automatic, replacing the calibre 5000

7. Portugieser Tourbillon Mystère Rétrograde – this remains much the same, save for a new domed sapphire glass and cosmetic changes