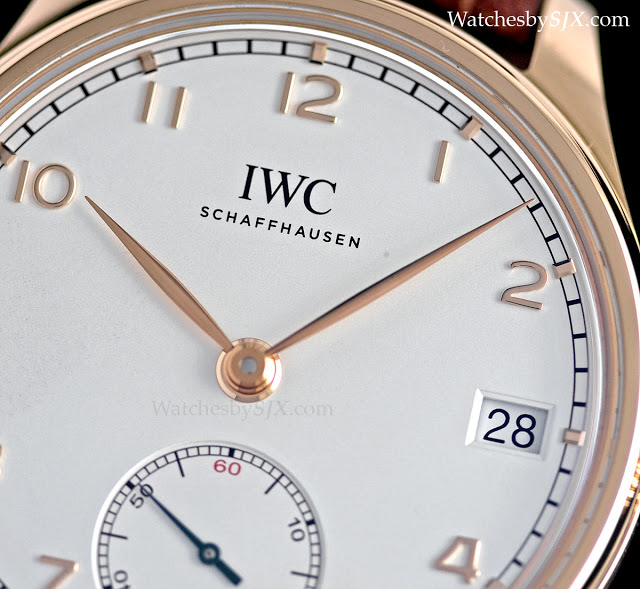 Unveiled at Watches&Wonders 2013, the Portuguese Hand-Wound Eight Days is a simple but practical watch with a week’s power reserve and a date function. The dial has all the design elements of the Portuguese line – applied Arabic numerals, a railway track minute index and leaf hands. But this classic styling is tempered by the date window at three o’clock, a feature equally practical and incongruous in such a design, and the contemporary “IWC” logo instead of the italicised logo of old.

Turn the slim 12 mm case over and the movement is revealed. Equipped with the 59215 calibre, the Portuguese Hand-Wound Eight Days has a 192 hour power reserve, equivalent to eight days. The power reserve indicator is integrated into the centre wheel bridge. The movement has the typical design characteristics of most long power reserve watches, namely a very large barrel, visible at 12 o’clock, and a small balance wheel.

Free-sprung, with adjustable weights and attached to a Breguet overcoil, the balance wheel is an elaborate set-up with all the conventional requisites for good chronometry. Combined with a long power reserve and what is likely to be a flat torque curve, this movement is likely to be a solid timekeeper. That being said, the finer details of the movement are not particularly refined. The overall movement decoration is clearly industrial. Take for instance the two unattractive brass pins which secure the steel cover over the balance cock. And notice the tumble polished finish of the steel cover itself. In its defence, IWC is not historically known for finishing, but instead solid and ingenious engineering. Available in rose gold as pictured here, but also in steel with either a silver or black dial, the Portuguese Hand-Wound Eight Days retails for S$27,000 (~US$21,800) in gold and S$14,000 (~US$11,300) in steel. These are Singapore prices and include 7% tax. – SJX