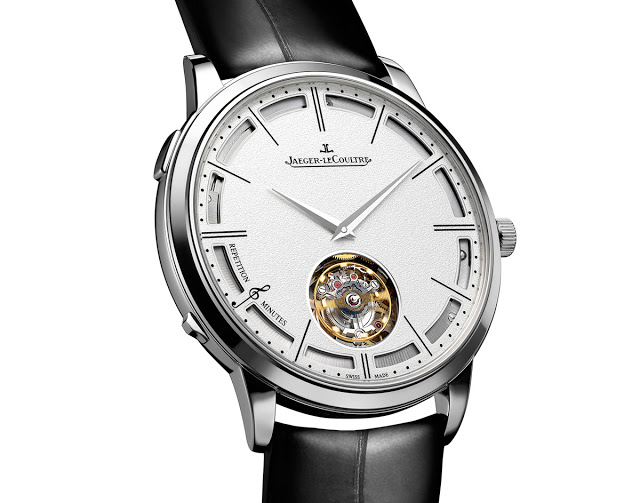 The new Jaeger-LeCoultre Master Ultra Thin Minute Repeater Flying Tourbillon has a headline grabbing claim to fame. It stands just 7.9 mm high, case and all, making it the thinnest minute repeating wristwatch on the market today, taking the title – by just 0.19 mm – from Vacheron Constantin Patrimony Contemporaine Ultra-Thin Calibre 1731 (though it is not the thinnest minute repeating movement – more on that later).

To achieve that, it combines several notable features, some new and others seen elsewhere, to save the millimetres where they matter, both in the movement and on the case. The second key element responsible for its slimness is the peripheral winding system. Unlike a conventional rotor which sits on top of the movement, the peripheral rotor is essentially a thin band of platinum circling half the movement’s perimeter. That takes away the height of the rotor.

Mounted on ceramic ball bearings on the edge of the movement, the peripheral rotor moves freely in either direction, but only winds clockwise. And its motion is visible through the 12 apertures all around the edge of the dial. Though uncommon, the peripheral rotor is not new. Patek Philippe unsuccessfully tried it in the sixties, but the mechanism was inefficient. Only with Carl F. Bucherer’s A1000 movement in 2008 did peripheral winding make it to production on a large scale; more recently Audemars Piguet and Cartier have unveiled calibres using this mechanism. Thin as it is, the Master Ultra Thin Minute Repeater Flying Tourbillon is the thinnest minute repeating watch on the market, but the cal. 362 inside is not the thinnest repeater movement. In fact, at 4.8 mm high it is the same height as the cal. 1290P inside Piaget’s automatic Emperador Coussin minute repeater. And both are beaten by a pair of hand-wind movements: Vacheron Constantin’s cal. 1731 is just 3.9 mm high, with F. P. Journe’s cal. 1408 coming second at 4.04 mm.

That means JLC’s accomplishment is not just the slim movement, but equally in making the knife-edge case very slim. Though JLC does not explain, the case construction and rotor is likely to be the reason behind the fiddly activation of the repeater. Instead of the usual slide to activate the repeater, this has a button at 10 o’clock. Once the button is pressed, it stays flush with the case. A tiny slide at eight o’clock needs to be pushed in order to bring out the repeater button for activation once again. The likeliest explanation for that is absence of the spring to ensure a button pops back out after use; the case and rotor probably left no space for it.

But beyond the height reducing elements of its construction, the new repeater also boasts a minor, but practical, feature. All repeating watches have a gap between the striking of the hours and minutes when there are no quarters to be struck. So for instance at 8:03, eight hours will be sound, followed by a pause, and then the three minutes.

That pause is due to the quarter striking mechanism running, but not striking since there are not quarters. JLC has taken that away, so when there are no quarters, the repeater chimes the hours, and the minutes immediately after. Additionally, the repeater mechanism uses the twin inventions JLC patented in its earlier repeating watches. One is the attaching the gongs of the repeater to the sapphire crystal for improved resonance, and the other are the trebuchet hammers, which have a built-in spring and pivot for extra striking power.

The Master Ultra Thin Minute Repeater Flying Tourbillon has a 41 mm white gold case and is limited to 75 pieces. The retail price before taxes will be €294,000, equivalent to about US$402,000 or 509,000 Singapore dollars.