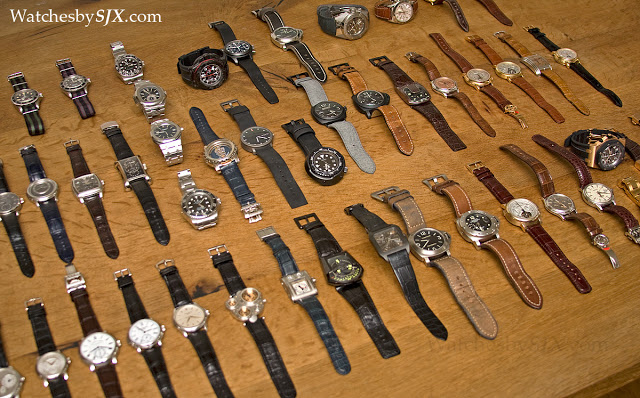 The general consensus amongst collectors, and even industry insiders, is yes. But how does that sentiment stack up against the actual data? Figures from the Federation of Swiss Watch Industry (FHS) illustrate a significant price jump in prices. In 2004 the average export price of a Swiss watch was 440 Swiss francs, and in 2012, the last full year figure available, the price was 730 Swiss francs. That is an increase of 66% in nine years.

Because most of the world’s luxury watches are made in Switzerland, the country’s export figures are a good proxy for the business as a whole. Additionally, the FHS figures cover all Swiss watches, including the most basic like Swatch watches. Consequently they like understate the price increase at the high horology end of the market. Compare the 66% increase to the overall price index for the cost of producing goods in Switzerland for a similar period. According to the Swiss government’s Federal Statistics Office, the price index covers “goods which are produced and sold by enterprises operating within Switzerland”, sold both domestically as well as internationally, rose by approximately 5.9% for the whole ten years from 2004 to end 2013.  The figure of 5.9% for the last decade is similar to the ballpark figure for the annual price increase in luxury watches for the same period.

But beyond the price increase, the absolute price level of a luxury watch is high relative to wages. Consider an entry-level complication from a high end brand, like the Patek Philippe Annual Calendar, which retails for about US$40,000, or the Royal Oak Offshore in steel which costs about US$25,000. Assuming a buyer spends 10% of his annual income on one such wristwatch, that would mean an income of at least US$250,000. Just over 2% of households in the United States, the world’s second largest watch market, meet that income threshold.

Only being accessible to the top of the income pyramid is not problematic if watches were rare. But they are increasingly less rare, because output has risen over the last decade, adding to the wristwatches in existence. FHS statistics indicate the annual output in volume of Swiss watches rose by about 16% from 2004 to 2012. Not a significant amount in itself, but the effect is cumulative. Every additional wristwatch is an addition to the numbers already in existence.

High-end wristwatches have a great deal of longevity – they are supposed to be heirlooms after all – and suffer a lower attrition rate than the other great boys’ toy, exotic cars, so watches ever made are still out there on someone’s wrist or in a display case.  The growing pool of watches in existence fuels the growth of a secondary market, which is an alternative to buying new watches.

Proof of the rise of the secondary market can be found in the watch sales by auctioneers like Christie’s, which enjoyed a tenfold rise in sales over the decade. All of this does not matter, as long as the consumer still believes in the product and keeps on buying, and buying. But the momentum that has kept the industry lucrative appears to be slowing.

With sharp slowdowns in some of the biggest markets, namely China and Hong Kong, Swiss watch exports for January to November 2013 (the latest month available) are up only 1.7% compared to the same period a year earlier. In comparison, exports rose 10.9% from 2011 to 2012. That is a sharp slowdown and those figures do not cover retail sales to the end consumer. Anecdotal evidence from industry insiders indicates that inventory is rising at retail level, meaning that even though exports rose by a sliver, sales to the end consumer are weakening.

It will be several months into 2014 before the full picture is clear, but the signs point towards a turning point in the decade long boom. So what happens now? Stay tuned for part two.

EDITORIAL: Are watches too expensive? (Part 2)

In the last decade, the retail prices of luxury watches has risen faster than inflation and incomes, they are getting more expensive quicker than most can afford. That is untenable in the long run. Already for 2013 watch exports from Switzerland are flat, a stark contrast with the rapid growth of previous years. Even though the outlook for the whole watch industry is uncertain – no brand will be immune from this – the outcome is likely to be positive for the watch buyer.