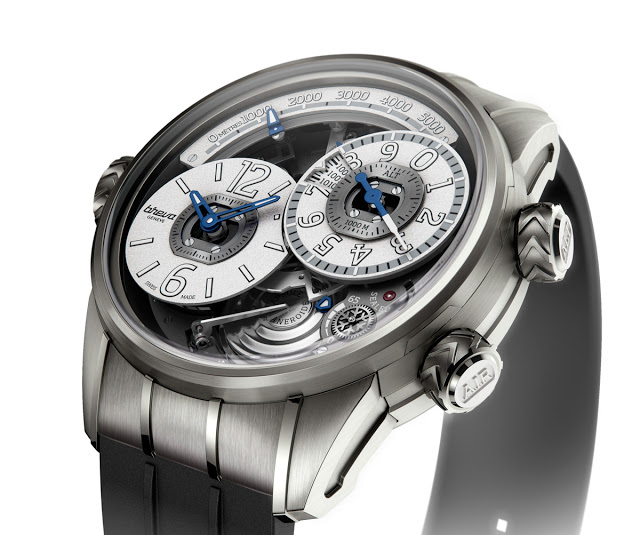 Breva has just unveiled its second wristwatch, the Genie 02 Terre in titanium. Equipped with a mechanical altimeter that can measure up to 5000 m or 16,400 ft, the movement of the Genie 02 Terre was developed by Jean-François Mojon of Chronode. At its debut in Baselworld 2013, Breva presented its first wristwatch, the $170,000 Genie 01, powered by a movement from technical specialist Chronode. The titanium Genie 02 Terre is a more accessibly priced variant of the same movement, and is equipped with a built-in altimeter which can measure altitudes of up to 5000 m or 16,400 ft. That is accomplished by measuring the air pressure with a pair of aneroid capsules, visible on the dial at five o’clock. In order to measure altitude, air pressure inside the watch has to be equalised by opening the valve in the case at four o’clock, and then calibrating the watch to a known altitude or air pressure. The Genie 02 Terre is available with the altitude display either in metres or in feet. Altitude is indicated in thousands of metres on the on the top edge of the dial, and in hundreds of metres on the sub-dial at two o’clock. In this image the altitude is approximately 1300 m. And the smaller display integrated into the sub-dial at two o’clock shows air pressure in hectopascals (hPa); above it reads 1007 hPa. Time is displayed at eight o’clock, with the seconds at four. Just besides the seconds counter is the power reserve display, which tops out at 65 hours. The Genie 02 Terre has a 44.7 mm case in titanium, with a rubber strap. It’s limited to 55 pieces and the retail price of the Genie 02 Terre is as follows, in the respective currencies for each country: US$132,000, €97,500 and 168,000 Singapore dollars. Follow us on Facebook, Instagram and Twitter for updates and news. 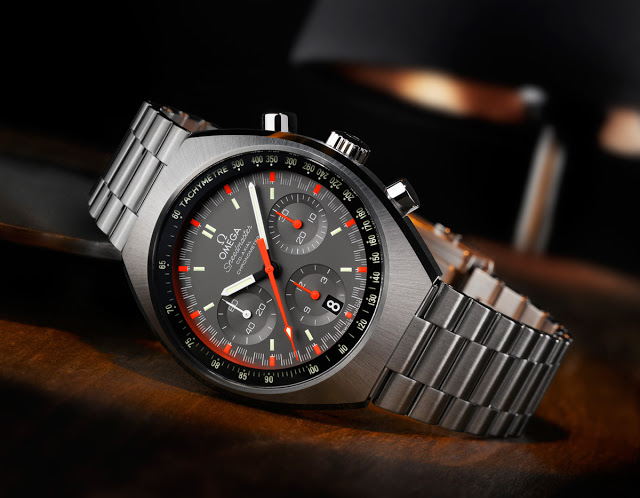 At Baselworld 2014 Omega will present the Speedmaster Mark II, a reissue of the 1969 original. Though almost identical to the original, the new Speedmaster Mark II is updated and improved, most notably with the in-house Co-Axial cal. 3330 movement. First unveiled in 1969, the same year astronauts took a walk on the moon wearing the Omega Speedmaster Professional, the original Speedmaster Mark II was equipped with the hand-wind cal. 861 and a typically seventies tonneau shaped case. Omega has ditched the cal. 861 in favour of the Co-Axial cal. 3330, added a couple of other upgrades, but kept the distinctive, brushed steel case. And two dials are available, a classic black and a multi-coloured “racing” dial. The second seventies reissue in as many years (the first was last year’s Seamaster Bullhead Chronograph), the new Omega Speedmaster Mark II is equipped with the cal. 3330, an automatic, column wheel chronograph movement fitted with the Si14 silicon hairspring. Like all other Omega movements with the silicon balance spring, this comes with a four year warranty. Another notable feature is the tachymetre scale, which is printed on the underside of the sapphire crystal. Thanks to an aluminium ring filled with SuperLuminova which sits directly underneath the tachymetre scale (similar in principle to the sandwich dial construction), the numbers of the tachymetre are illuminated from below, making them legible even in low light. The sandwich tachymetre scale is available for both versions of the new Speedmaster Mark II. One is black with white hands and markers, the quintessential look for a Speedmaster. The other has the same design, but is in grey with the hour indices and three chronograph hands in orange, what collectors have nicknamed a “racing” dial. Fitted with a sapphire crystal, the tonneau case is brushed steel and water resistant to 100 m. A pusher for advancing the date is recessed into the case at 10 o’clock. Both versions of the Speedmaster Mark II will retail for 8050 Singapore dollars including 7% tax, which is equivalent to about US$6350 or €4650. Follow us on Facebook, Instagram and Twitter for updates and news.