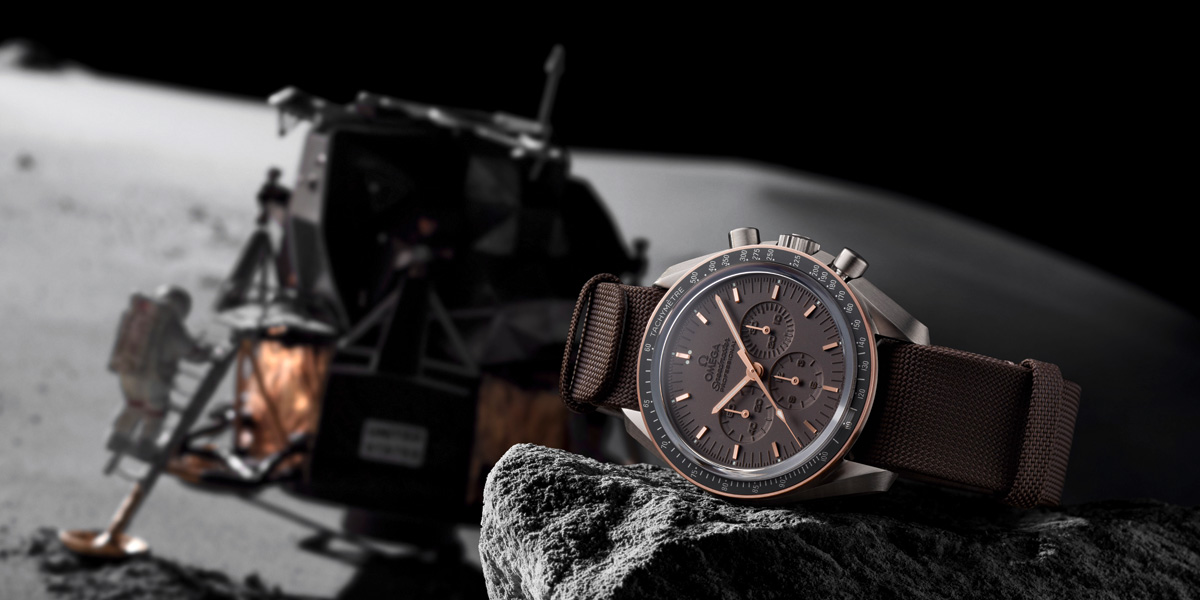 For the 45th anniversary of the first moon landing in 1969, Omega has created a limited edition Speedmaster Professional Moonwatch in titanium and rose gold, with a laser etched black PVD dial. The first men to land on the moon famously did so with the Speedmaster Professional Moonwatch on their wrists. It’s 45 years since the lunar landing naturally at Baselworld 2014 Omega unveiled a limited edition to commemorate the Apollo 11 mission.  Joining the dozens of Speedmaster limited editions created over the years, the Omega Speedmaster Professional Apollo 11 45th Anniversary Limited Edition has features unusual for a Speedmaster Moonwatch: a titanium and Sedna gold case fitted to a NATO strap. The new Speedmaster has a 42 mm titanium case with the bezel, hands and indices in rose gold, while the tachymetre insert on the gold bezel is made of black ceramic. It is fitted with a box-shaped sapphire crystal. Inside is the hand-wound cal. 1861 movement. Made of brass with a black PVD coating, the dial is laser etched to remove material thus creating the text, markers and sub-dials in relief. This technique for dial manufacturing is not new to the watch industry, though it is uncommon. In a first for a Speedmaster, this will be delivered on a fabric NATO-inspired strap. Limited to 1969 numbered prices, the Speedmaster Moonwatch Apollo 11 45th Anniversary will cost 9,950 Singapore dollars including 7% tax, or about US$7900.

Hands-On With The Omega Speedmaster Apollo 11 45th Anniversary, The First Ever Moon Watch In Titanium (with live photos and price)