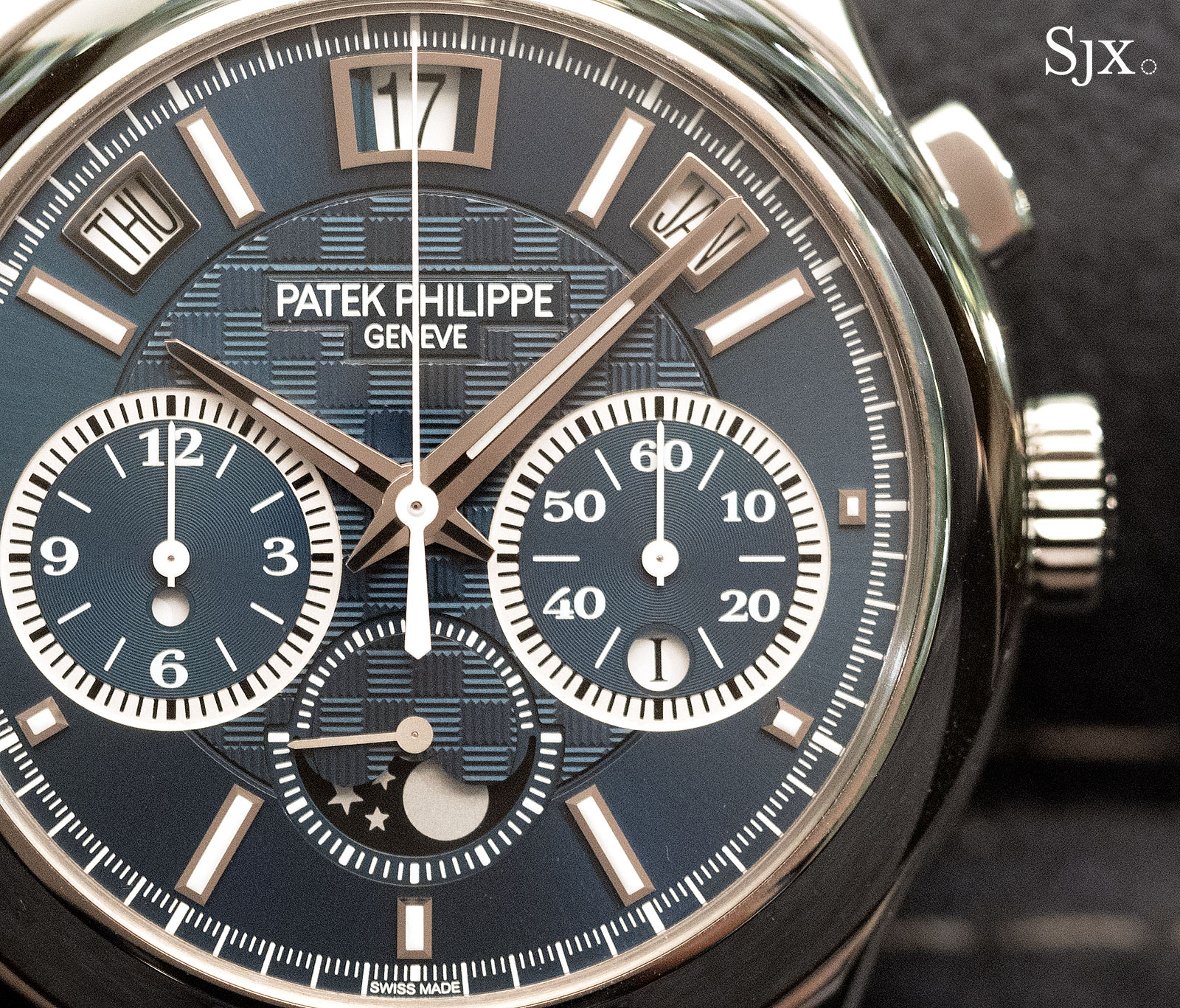 Patek Philippe‘s entry this year for Only Watch is its most complicated creation to date: a ref. 5208T-010 grand complication in a titanium case. Mechanically it’s identical to the stock model, which is to say very complicated: a minute repeater, a single-button chronograph, and an instantaneous perpetual calendar. And the ref. 5208 also happens to be one of Thierry Stern’s favourite watches.

What makes it different is the case and dial. Patek Philippe has made it a habit of rolling out one-off watches in steel or titanium for the biennial charity auction, and so it is for the 2017 instalment of Only Watch (there are whispers it will be the last auction). The case is identical to that of the ordinary platinum version, still 42mm in diameter with the same open-worked lugs. So while it is still large, the watch is feels unusually lightweight, one of its best qualities. The lightness of titanium, or its lack of denseness put another way, is also a big boost for the minute repeater.

While the standard ref. 5208 in platinum (and most other Patek Philippe repeaters in the same metal) sound slightly muffled thanks to the hefty case, the Only Watch repeater is surprisingly sonorous. It sounds good.

The movement inside is the cal. R CH 27 PS QI, the second (or third depending on how you measure it) most complicated wristwatch movement made by Patek Philippe, after the whopper that’s inside the Grandmaster Chime. It has an novel black rhodium finish, which is a pale grey and distinct from the silvery “white” rhodium finish that’s standard. Also unique to this watch is the engine-turned decoration on the platinum micro-rotor. The guillochage on the rotor reproduces the pattern on the “carbon fibre” pattern on the dial. While modern looking enough that traditionalists might find it too modern, the dial guilloche is executed by hand and devilishly difficult to do. The motif is engraved with a traditional rose engine, with each of the horizontal and vertical strokes that mimic the weave of carbon fibre being individually engraved. The dial is finished in a dark metallic blue with lots of white accents, including Super-Luminova on the hands and hour markers, giving it a sporty-ish look. That’s further enhanced, or exacerbated depending on the perspective, by the fabric strap with white stitching. Overall the ref. 5208T-010 “Only Watch” is a curious beast, both impressive and peculiar. One thing, however, is certain – the watch will be by far the most expensive lot at the Only Watch auction. The estimate is SFr900,000 to SFr1.1m, or about the same in US dollars.

The crucial question is how expensive it will be. The Patek Philippe ref. 5016A at Only Watch 2015 hammered for SFr7.3m, briefly becoming the most expensive watch ever sold a world record before being bested by the vintage ref. 1518 in steel a year later.

While this year’s ref. 5208T is more complex thus intrinsically more expensive than the steel ref. 5016A, it has a decidedly contemporary look. While this look is goes down well with many of Patek Philippe’s retail clients, the preferences of buyers who splash out at watch auctions tend towards a more classic style. In fact, the taste for retro Patek Philippe watches – think Breguet numerals, leaf hands and the like – is so strong that it has also become fashion.

For that reason the price of the ref. 5208T will face resistance on its way up, leaving chances slim that it’ll surpass the mark set by its predecessor in 2015.

To see the entire Only Watch catalogue and place bids, please visit Christies.com.

Hands-On with the Patek Philippe Nautilus Ref. 5711/1P in Platinum

One of the rarest contemporary Patek Philippe watches, the Nautilus ref. 5711/1P is entirely in platinum, with only a handful sold each year. We go hands-on with one of these rare beasts.