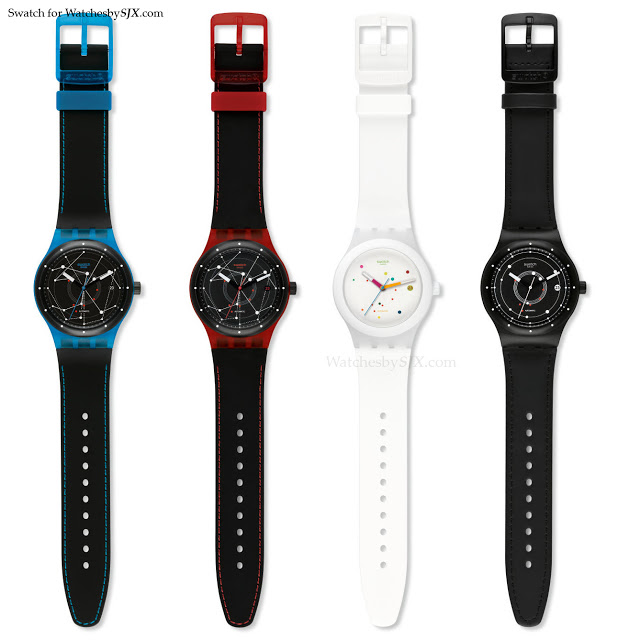 The landmark Swatch Sistem51, the first ever mechanical watch assembled entirely by machine, is finally available, but only in Swatch stores in Switzerland until next year. Launched at Baselworld in March 2013, the Swatch Sistem51 is undoubtedly one of the most significant watches of the year. Not because of the watch itself, which is yet another plastic Swatch, but because the Sistem51 is a vastly simplified mechanical movement made entirely by machine. Four versions are available, Sistem Blue, Red, White and Black. All have plastic cases with either rubber or leather straps. They are priced at SFr150 each, which is about US$169. The respective movements are in colours matching the dials. After delays in delivery the four models in the Sistem51 line-up are finally available, but only in Swatch stores in Switzerland, with global delivery early next year. – SJX 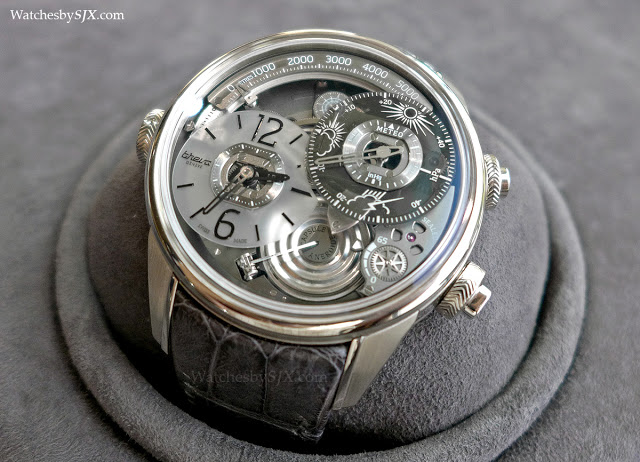 Breva made its debut at Baselworld 2013 with the Génie 01, the first mechanical wristwatch featuring an altimeter and barometer. It measures atmospheric pressure, allowing it to provide a forecast of sorts for the weather. Conceived by Breva founder Vincent Dupontreué, who founded and then sold his eponymously named clothing brand, the Génie 01 is less a watch than it is an ultra-luxe gadget. With a movement devised by Chronode’s Jean-François Mojon, the Genie 01 has a built-in altimeter and barometer, both of which are entirely mechanical. Though large at 44.7 mm wide and 15.6 mm high, the Genie 01 does not feel all that big. It does, however, look complex. The dial is multi-layered, with the time displayed on a frosted sapphire disc.

Altitude in metres is shown on the upper edge of the dial (from -300 to +5,300 m), and atmospheric pressure in mmHg is indicated on the large sub-dial at three o’clock. Visible at six is the aneroid barometer, shaped like a drum; changes in air pressure cause it to expand and contract ever so slightly.  The movement is hand-wound with a 65 hour power reserve, and comes from the prolific Mojon, whose works include the MB&F HM5 “On the Road Again” and Legacy Machine 2, as well as the HYT H1. It is set and wound by the crown at nine o’clock. Using the altimeter and barometer is not the easiest of endeavours. Turning crown at two adjusts the barometer, while pressing it adjusts the altimeter to calibrate it to a known altitude. And the crown at four is an airlock which traps a small amount of air to equalise the air pressure inside and outside the case. A tiny Teflon filter in that crown ensures that the air which is let into the case is entirely free of moisture The purpose of the barometer is its use in approximating a weather forecast: falling pressure indicates rain while rising pressure means sunny skies. But an altimeter and barometer are not traditional complications, and they are arguably less practical than a chronograph or perpetual calendar.  That being said, the Genie 01 is a genuinely well executed timepiece – the movement has strong technical provenance, and the construction and finish throughout is good. And it is also a complicated calibre, comprising 405 parts. It is evident effort and money has been put into making this a high quality product. But then there is the price, for the Genie 01 costs SFr150,000 (~US$169,000) in rose gold, and SFr155,000 (~US$174,000) in white gold. Measured against traditional watchmaking the Genie is a difficult proposition, but as an ultra-luxe gadget – think robot dinosaurs and hovercrafts – this is definitely competition for the dollar. – SJX