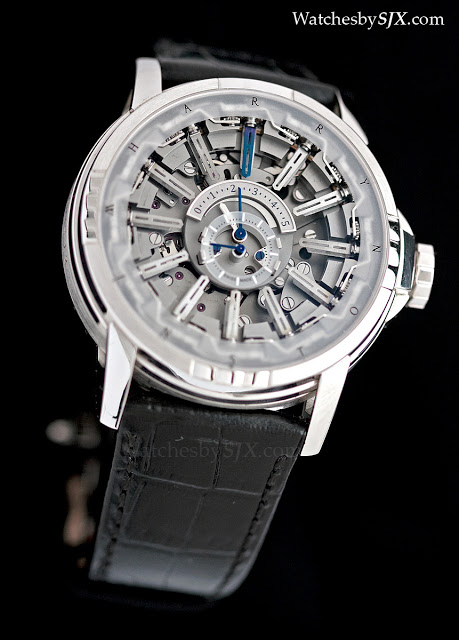 Developed together with Emmanuel Bouchet, the Harry Winston Opus 12 faithfully adheres to the governing philosophy of most the Opus series – tell the time in the most unusual and complex manner possible. Unveiled at last year’s Baselworld, the Opus 12 tells only the time, but is remarkably complex, and it looks the part. The fact that the Opus 12 has 27 hands is revealing. Conceptually, the Opus 12 is similar to the more recent Opus XIII, which likewise has plenty of hands and action. The movement, conceived by Emmanuel Bouchet, co-founder of movement specialist Centagora, comprises 607 parts and 80 jewels, putting it in grand complication territory.

The only conventional bits of the Opus 12 time display are the constant seconds, indicated by a blued steel hand on a sapphire ring, and the power reserve, which sits just above the seconds.

And then it starts to get interesting. Co-axial with the power reserve hand is the retrograde five minutes hand, meaning it jumps back to zero every five minutes and starts over.

And then there is the hour baton. This is shorter than the five minute baton, and it usually sits underneath the minute baton so it is hidden. But at the top of the hour, an elaborate process begins.

Starting at the hour that just passed, the hour batons rotate downwards and disappear. One after another, in successive order, clockwise around the dial, until the current hour is reached. For instance, as soon as the time hits three o’clock, the two o’clock baton will rotate downwards, followed by three, four, five and so on, with the three o’clock baton coming up blue at the very end. That is illustrated in this video clip:

This time display requires the use of bevel gears, in order to translate the horizontal gear action of the movement in the vertical motion of the hands. These bevel gears are visible at the base of the batons on the perimeter of the dial. Most of the dial is open, revealing the gearing behind the time display. It is a compelling sight, especially when the mechanism is in action. Interestingly, Bouchet’s inspiration for the time display came from Nicolaus Copernicus’s revelation that the Earth rotates on its own axis, as well as around the Sun. Housed inside a chunky 46 mm white gold case, the very large manual wind movement has twin barrels, but a mere 32 hour power reserve, because the constantly moving time display consumes tremendous amounts of power. The Opus 12 is impressive not just because of the time display, but the brilliant energy management which manages to keep such a complex system going.