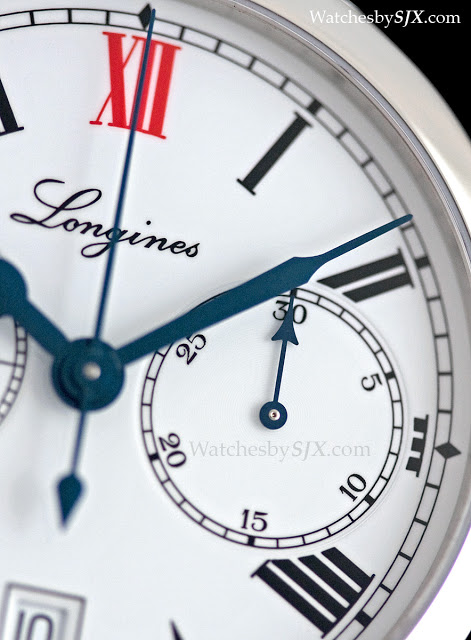 Created to mark its 180th anniversary, the Longines Single Push-Piece Chronograph is an affordable and attractive wristwatch with a strong vintage flavour. Longines excels at remakes of vintage timepieces, including this Single Push-Piece Chronograph 180th Anniversary. Unveiled last year to mark the brand’s 180th anniversary, with a good deal of that 180 years spent making top notch chronographs, this monopusher chronograph is a modest but well executed watch. As the name implies, it has a single button to start, stop and reset the chronograph, integrated into the crown. The styling leans heavily on early twentieth century timepieces. Two variants are available, the first with wire lugs, ref. L2.776.4.21.3. This is inspired by the first wristwatches which were pocket watches converted to wristwatches by having wire lugs soldered on. The second model, ref. L2.775.4.23.3, has regular lugs, and looks more conventional. For that reason, the wire lug model is more appealing. Both have 40 mm cases with a polished finish, as well as sapphires crystals front and back. Though each has a different dial, both are in white lacquer which approximates enamel. The hands are blued steel and well done; they are more attractive than the dial. Both versions have the same Longines Calibre L788 inside. Decorated in a modest but appropriate manner, the movement is also known as the ETA A08.L11. At heart it is a Valjoux 7750, but one drastically modified to feature both a column wheel and monopusher function. This same movement is found in the recently launched Avigation Oversize Crown as well, illustrating how perfectly suited a bi-compax, monopusher movement is to a vintage-style timepiece. FP Journe has just released the second teaser for its upcoming 30th anniversary wristwatch, showing part of the case and back.

A week after the first teaser for the wristwatch to mark FP Journe’s first timepiece 30 years ago, the second hint from FP Journe reveals a bit more. It shows a case decorated with guilloche along with a hinged case back, in the style of a pocket watch. And it indicates the 30th anniversary watch will be a limited edition. The watch will be revealed in full in two weeks, on 18 October. – SJX