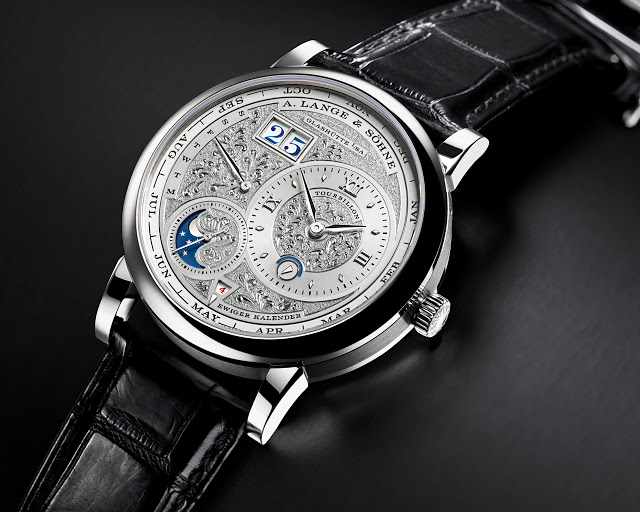 The dial is solid white gold, and decorated in tremblage and relief engraving. And the numerals of the signature Lange big date are hand-painted, a first for Lange.

Turn it over and the special decoration which distinguishes the Handwerkskunst edition is visible. Both the cocks for the tourbillon and intermediate wheel are relief engraved, as is the gold portion of the gold and platinum rotor. Additionally, the bridges of the movement are decorated with solarisation, instead of the striping found on the regular edition. And the watch has one more detail to distinguish it: the Lange branding as well as case and serial numbers on the back are all hand-engraved. Also presented for the first time at Watches&Wonders is the Saxonia Outsized Date in rose gold. This uses the cal. 921.4 Sax-O-Mat movement first used in the original Langematik with oversized date. In addition to the large date, the other notable feature of the Sax-O-Mat is the zero-reset seconds – pull out the crown and the seconds hand jumps to 12 o’clock for precision time setting (hence the “O” in Sax-O-Mat).

Both this and the Lange 1 Tourbillon Perpetual Calendar Handwerkskunst will be available only at Lange boutiques.