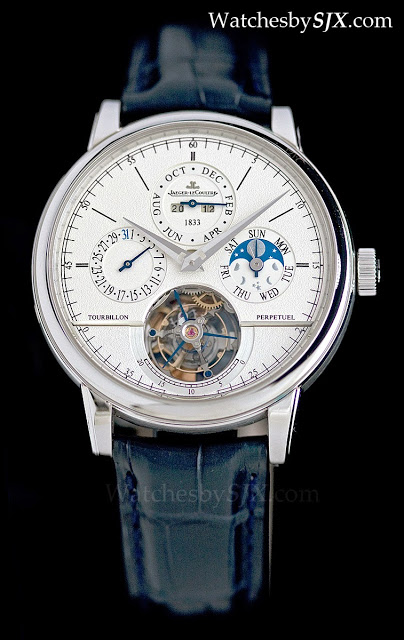 In 2013, Jaeger-LeCoultre marks the 180th anniversary of the founding of Antoine LeCoultre’s workshop in Le Sentier. Amongst the watches created for the jubilee is the Master Grande Tradition Tourbillon Cylindrique à Quantième Perpétuel Jubilee in platinum. As its name implies, the Tourbillon Cylindrique à Quantième Perpétuel features a tourbillon with cylindrical hairspring as well as a perpetual calendar. The case is platinum, while the dial is silver with a grained finish. The perpetual calendar is displayed in the conventional with three sub-dials, no surprises there. At 12 o’clock is the four digit year indication, an uncommon feature in perpetual calendars, as well as “1833” which is the year Antoine LeCoultre established himself in Le Sentier. Because of its cylindrical hairspring, the tourbillon cage is considerably higher than a typical carriage, leaving the the tourbillon more prominent than usual. The aperture for the tourbillon is also set one step down from the main dial above, enhancing the effect. With a stepped bezel and lugs, the case is much more attractive than the simplistic and chunky cases previously used for the Master Grande Tradition. In addition, it is made from a platinum alloy that has a whiter sheen than usual, which has never been used before in watchmaking. Turn the case over and the cal. 985 movement is revealed. The solid gold rotor, unique to the Jubilee collection, is decorated with a relief of the gold medal won by LeCoultre at the 1889 Universal Exposition in Paris. The Tourbillon Cylindrique à Quantième Perpétuel Jubilee is limited to 180 pieces, with a retail price of S$209,000 including 7% tax. That is equivalent to approximately US$164,000. This, along with the rest of the diverse JLC 2013 collection, will be on show at Watches&Wonders, the mini-SIHH for Asia, in Hong Kong at end September. – SJX