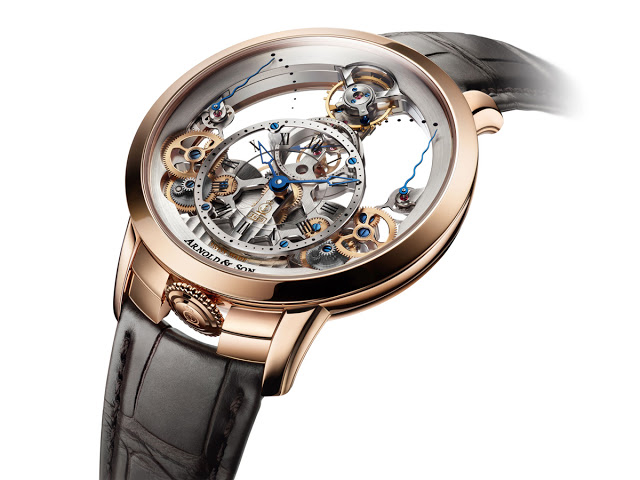 Arnold & Son, which was acquired by Citizen of Japan last year, has just announced the Time Pyramid at Baselworld 2013. A skeleton watch with the movement laid out in a triangular form, the Pyramid is inspired by the standing English skeleton clocks of the nineteenth century which had a similar movement shape. Sandwiched between two sapphire crystals is the open-worked A&S 1615 movement, developed by La Joux-Perret, the sister company of Arnold & Son (and also now owned by Citizen). The movement runs from 12 to 6 o’clock with the balance wheel at the top, followed by the linear gear train, and the twin barrels at six o’clock, each with its own power reserve indicator. Together both barrels give a power reserve of 80 hours. The Pyramid is in rose gold with a large, 44.6 mm case, which should allow for a panoramic view of the usual movement. The retail price is CHF39,960 which is equivalent to about USD42,100. – SJX 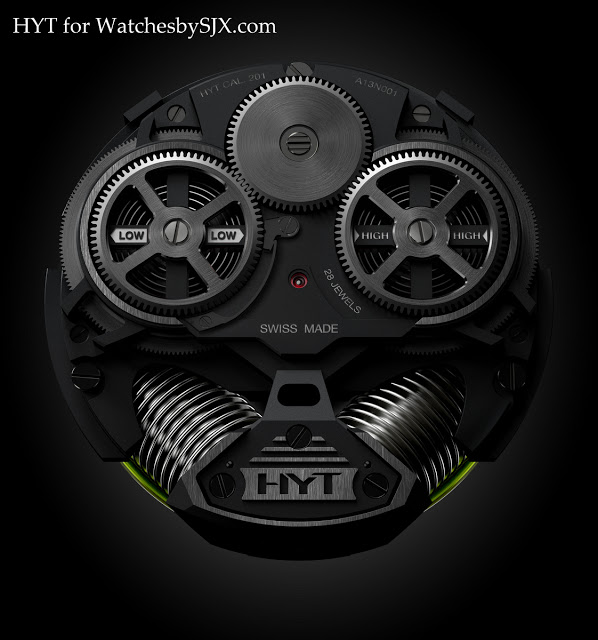 HYT caused quite a stir at Baselworld 2012 with the H1, a hydro-mechanical timepiece with the hours indicated by the meniscus of two fluids. At Baselworld 2013 in a month HYT will unveil the H1, created in collaboration with Giulio Papi and his team at AP Renaud & Papi (APRP). In the meantime here’s a teaser. Stay tuned for more. – SJX 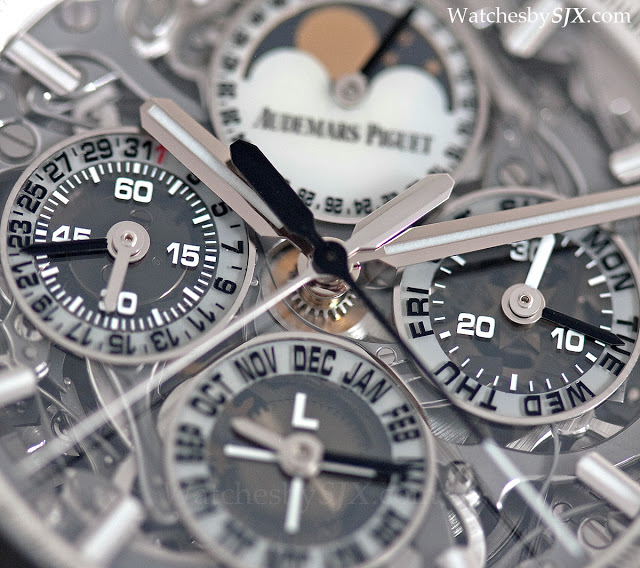 At SIHH 2013, Audemars Piguet presented the Royal Oak Offshore Grande Complication – with perpetual calendar, split seconds chronograph and minute repeater – as its flagship new product. It is the most complicated Offshore ever, though not entirely new. Back in 1992, Audemars Piguet unveiled its Triple Complication, which had a perpetual calendar, chronograph and minute repeater. AP later added a split seconds function to the movement, turning it into the Grande Complication. This is the first time the Grande Complication cal. 2885 movement is used inside the Offshore case. All the calendar displays are on four sub-dials, along with an uncommon week of the year indicator at 12 o’clock. The dial is sapphire, revealing all the intricate mechanics below. Even the moon phase disc is sapphire, with the moon and blue background done via PVD of metal. Seeming larger due to the large crown guard and pushers, the titanium case is actually 44 mm. The bezel, pushers and crown in black ceramic. As is the case with the Royal Oak in general, AP has achieved a precise and fine finish with the matte and polished sections of the case.

The display back reveals the movement, which has a dark ruthenium coating to match the styling of the case. At the owner’s request the rotor can be customised. The strap is rubber with a titanium buckle, though it is not a sports watch as its water resistance is only 20 m (due to the repeater slide mechanism), not to mention the fragility of the movement.  The retail price is S$936,000, or about US$760,000. This is also available in rose gold, which like the titanium version is limited to three pieces. This watch is a masterpiece of watchmaking; the 648 parts of the movement require inordinate skill and effort to finish and assemble. It is not radical watchmaking, however, despite its appearance.  Unlike the alacrite AP Royal Oak Concept Watch for instance, this Offshore Grande Complication is actually a highly traditional timepiece in concept and construction, though the aesthetics of the case and movement are modern. Conceptually this is similar to the IWC Il Destriero Scafusia and the other ‘wedding cake’ grande complications of the nineties with traditional complications piled into one movement. See the rest of the SIHH 2013 collection from AP in my SIHH report. – SJX