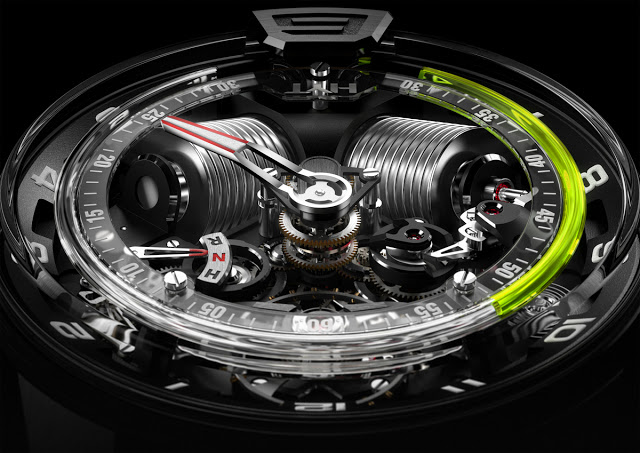 HYT has just premiered its second hydro-mechanical wristwatch, the H2, created in collaboration with AP Renaud & Papi. This is essentially a more elaborate version of the earlier H1, with added functions conceived by AP R&P like its crown function selector. As with the HYT H1, the hours are indicated by the meniscus of two fluids in a tube running around the edge of the dial. Driven by twin bellows arranged in a “V”, the liquid instantaneously retreats back to six once it reaches six on the other side; in that way it is a retrograde display. And in the image below the time reads 10:34. In addition to the fluid display, the H2 has a temperature indicator at nine o’clock. This tells the wearer if the fluid is at the optimum temperature range – novel but not useful. The eight day power reserve, however, is convenient. And it has two more functions which will be familiar to those who know AP R&P movements. The first is the crown function indicator – H, N and R –  at three o’clock. Pressing the crown allows the wearer to wind (R) or set the time via the crown (H), there is no need to pull it out. And “N” refers to the neutral position. Also, the minutes are indicated by a retrograde hand. When it reaches the 30 minute mark at six o’clock, it jumps back to continue at 30 minutes on the other side of the “6” marker. This allows the minute hand to avoid the bellows.  A similar function can be found in the Chanel J12 Rétrograde Mystérieuse Tourbillon, which was also made by Renaud & Papi. The case is black DLC coated titanium. Only 50 pieces will be made with an estimated price of CHF90,000-98,000. – SJX