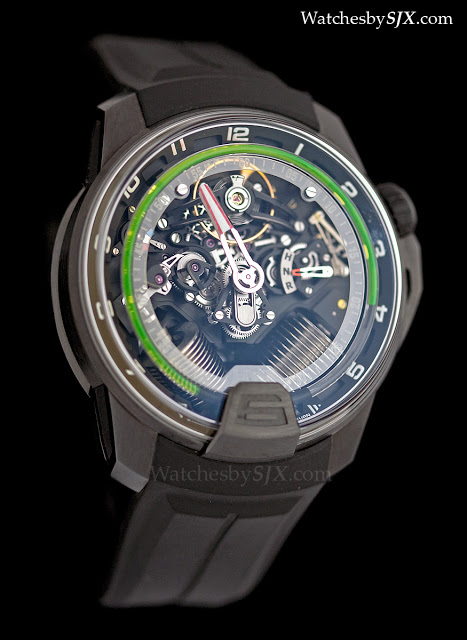 At Baselworld 2013 HYT unveiled its second hydro-mechanical wristwatch, the H2. Created in collaboration with Renaud & Papi, the H2 continues HYT’s novel approach to watchmaking with a liquid time display. Unveiled in 2012, the HYT H1 was the world’s first watch with a liquid time display. For the H2, HYT has adhered to the same formula: a mechanical wristwatch with the hours indicated by fluids inside a clear glass tube.

But the H2 is a more elaborate timepiece. Having been conceived with Renaud & Papi, the H2 movement, with its eight day power reserve, is more complicated and refined that of its smaller brother.

Whereas the H1 had a solid dial, the H2 has no dial. Instead the movement is exposed in all its multi-layered glory. It is not exceptionally in photos, but the movement has tremendous visual depth thanks to the layout of the bridges. All the wheels and gears are visible, as are the bellows driving the liquid, arranged in a “V” like the cylinders of an engine. The overall effect is three-dimensional and engaging.

The H2 has a liquid hour display, indicated by the meniscus of two liquids inside the glass tube around the dial. One is a water-based green liquid, while the other is clear and oil-based, ensuring the two will never mix.

Travelling clockwise around the dial, the green liquid acts as the hour hand, returning to its origin at the top of the hour thanks to a snail cam, much like a retrograde hand.

The minutes are engraved on a sapphire chapter ring above the movement, and the minute hand jumps from “30” on one side to “30” on the other side, while continuing to keep time. At 12 o’clock sits the balance bridge, but it is a regular balance and not a tourbillon. And at three o’clock is the crown function indicator, synonymous with Renaud & Papi and most common on Richard Mille tourbillons. There is no need to pull the crown out, just pressing the crown allows the wearer to wind (R) or set the time via the crown (H). And when not in use the crown is in a neutral position (N).

The H2 also has a temperature display at nine o’clock, which indicates if the watch is operating at the optimum temperature. White is optimum, while blue is cold and red is warm. That being said, the H2, like the H1, has a built-in mechanism to compensate for environmental effects on the liquid, so the H2 will function well regardless of the ambient temperature.

From the back the movement is less compelling. It reveals the bellows and two very large barrels for the eight day power reserve. Interestingly the sapphire case back is screwed directly onto the case and sits edge to edge, instead of being set into a metal case back. The advantage of this being the totally unimpeded view of the entire movement. The H2 will be made in a limited edition of 50 pieces in black DLC coated titanium with a retail price of SFr120,000 or US$129,000. The H2 is certainly a better watch than the H1, with a more elaborately and creatively constructed movement, as well as possessing finer fit and finish – the Renaud & Papi quality is evident. But the H2 costs more than double the H1, which makes one think twice.