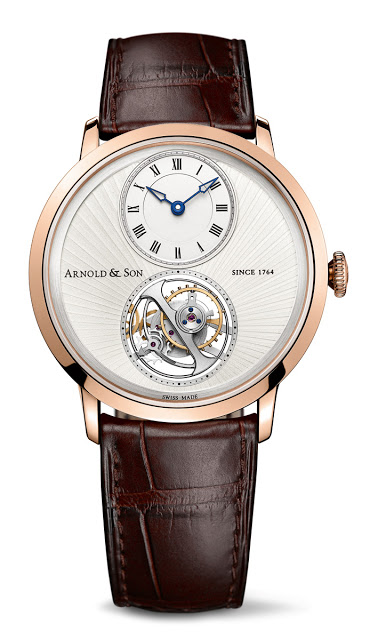 Despite looking like yet another run of the mill tourbillon, the Arnold & Son UTTE (Ultra-Thin Tourbillon Escapement) is special: the watch case is just 8.34 mm thick – and the cal. A&S8200 is a mere 2.97 mm – making it the thinnest tourbillon today.

Developed by Arnold & Son’s sister company La Joux-Perret – both companies are now owned by Citizen of Japan – the flying tourbillon movement has a power reserve of 80 hours, or about three days. In addition, the tourbillon cage is large at 14 mm wide, nearly half the movement diameter of 32 mm. And the tourbillon carriage is positioned on a higher plane than the movement, making it level with the hands and improving its visibility. Another aesthetic feature is the lack of visible screws on the tourbillon cage. The UTTE has a 42 mm case in either rose gold or palladium, with each metal being limited to 50 pieces. The rose gold retails for CHF68,420 while the palladium is CHF59,400. – SJX