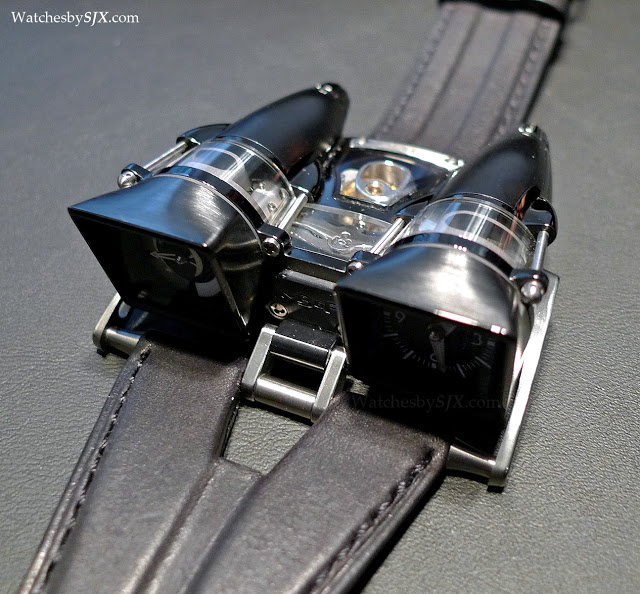 The MB&F HM4 Thunderbolt has finally reached the end of its 100 piece run. The last eight pieces will be turned into the HM4 Final Edition “Stealth Fighter”. Featuring the same titanium case as the original HM4, the Final Edition has the addition of a black PVD coating, hence the “Stealth Fighter” nickname.

In addition, the sub-dials are square, instead of round as they were before. Side by side with the original HM4, the Final Edition seems significantly larger, even on the wrist, even though it is exactly the same size, save for the squarish sub-dials. My favourite edition of the HM4 remains the Razzle Dazzle and Double Trouble pair, with the painted nose art and rivets on the titanium case. The HM4 Final Edition is priced at CHF198,000, which is about USD212,400. It will only be available at five retailers, The Hour Glass in Singapore, Westime in Los Angeles, Chronopassion in Paris, Chronometryx in Gstaad and MB&F’s M.A.D. Gallery in Geneva.

The HM4 Final Edition concludes the series, just a few months after the HM5 “On the Road Again” was unveiled. Later this year should see Max taking the covers off the LM2.